It’s not easy to build an alternative iPhone camera app: many tried, most of them failed, the one I loved was removed and the developers never got back to us. It’s not easy because Apple’s default camera application requires literally two taps to snap a picture, and there you have it in your camera roll. Where many developers failed is in simplicity and user approach: they promoted their app as the “best camera app for iPhone”, and they stashed 300+ features in it, making it impossible to use for the average iPhone owner.

So either you build an app for professionals (almostDSLR comes in mind), or you create something different. The latter option is exactly what the Instagram developers got right: they built a simple app to take pictures and make them prettier, and they wrapped it up with social features in order to create a brand new community around Instagram. A camera app with a social network inside it? The cool thing is, this could singlehandedly redefine the concept of “simple camera apps” on the iPhone for the months to come. Instagram is that good.

The app is very easy to use, it doesn’t overwhelm you with features and, most of all, taking pictures is as simple as in Apple’s camera app. The developers indeed broke some Apple HIG (Human Interface Guidelines) rules by creating a highly custom tab bar at the bottom which features a giant, rounded “Share” button that brings you to the actual camera. The fact that they called it “Share” and not, say, “Snap” tells a lot about the purpose of Instagram. It’s a camera app focused on going social, on letting you share what’s around you (and where you are, with geo-location capabilities) with the people that follow you. Think of a straightforward Forsquare that meets a simpler Camera+ that meets a simpler Facebook. It’s an interesting mix. 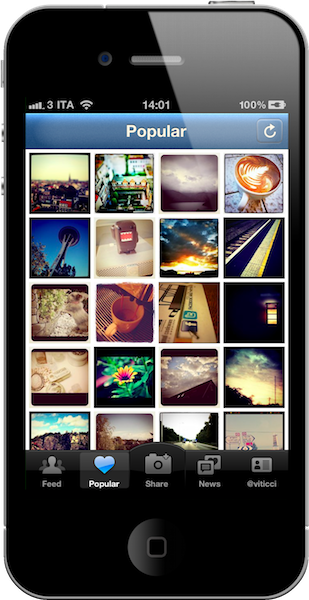 The aforementioned tab bar features 5 sections: Feed, Popular, Share, News and Profile. Once you’ve signed up for an Instagram account (it takes seconds and you do everything from the device) you’re prompted to invite your Facebook or Twitter contacts, or let the app scan for users in your iPhone contact list. I tested the app when it wasn’t public yet, so I didn’t find anyone. Now I’m starting to get some followers and find some people I care about to follow. In your profile you can change a profile picture, set your photos as private (just like Twitter’s private feature, authorization is required before people can follow you). Your actual profile page (the public one, not the settings) consists of a summary of your following / followers count, how many pictures you’ve taken on Instagram so far and a stream if your photos, comments and likes. I liked the fact that you can tap on the followers / following buttons to jump to a list of users you might be interested in (again, just like on Twitter).

The social aspect of Instagram is simple and accessible to everyone, but don’t let simplicity fool you: it’s well-thought. The News tab, for example, gives you a quick summary of all the recent activity towards your account: people that started following you, comments and likes to your photos. What’s great about this tab is that even if you’re doing something else inside the app and someone starts following you, a little popup will appear on top of that tab with the username of the user that caused that something. Notifications inside an iPhone app, basically. As you can see in the screenshot below, that’s what happened when my buddy Abraham Vegh started following me. 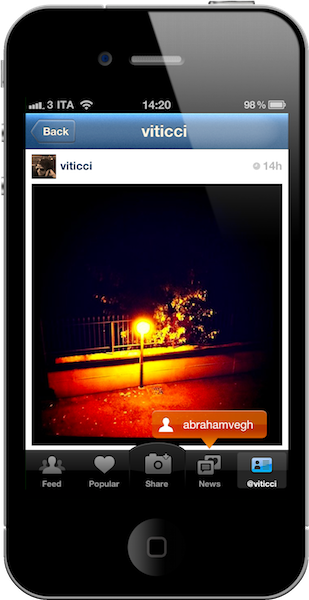 It’s pretty neat. The Feed section, on the other hand, is where you’ll probably spend most of your time in. Or maybe not. In the Feed you’ll see all the pictures from the people you follow, together with comments and likes from everyone - not just the people you both follow. It’s an interesting feature to discover new users now that the app and service are new, I think the developers are going to change that once the thing gets more popular. There’s just one thing I don’t like about the feed, and it’s more a geek annoyance than an actual problem: the top bar scrolls down together with the stream when you reach the top. Maybe it’s because the feed is some sort of a web view, maybe the devs are just going to fix this in a future update. Other than that, I like the feed: liking items requires one tap (you guessed it), and when you hit the comment button a new window will popup (with a cool animation) on screen with a text field and two button to send or discard the comment below it. I appreciate that Instagram doesn’t rely on the Return / Done keyboard button to send a new comment.

And this brings us to the actual photo taking capabilities of Instagram. The app has been slimmed down to be as easy as possible for everyone; there are no manual adjustments or double taps to perform in  there, you just take pictures or choose some from your library. All you can do is either change to the front-facing camera or activate flash. That’s it. Once you’ve taken a picture you can apply some filters (classics like lo-fi and Nashville are included) to make it prettier (or at least more interesting) and then share. Sharing means you can enter a description, attach a location, post it to some other social networks such as Twitter, Facebook, Flickr or Tumblr. Hit done, and you’ve shared a photo with your followers.

There are many image sharing platforms out there, and what I like about Instagram is that you can use it both as a tool to take prettier (and better) pictures (don’t forget that the app saves your creations to the camera roll) or as a social platform to share the most important moments of your life with the people you care about. This is what intrigues me about Instagram: it’s both local and social. It’s an iPhone app that successfully manages to integrate the social sphere with the usual photo-taking features in a package that entertains and engages the user. It looks good, it’s got an interesting icon, it’s free in the App Store. More importantly, it’s promising and it shows the path that many other apps should have followed, but never did. Instagram could be huge. Now I’m off to take some pictures. 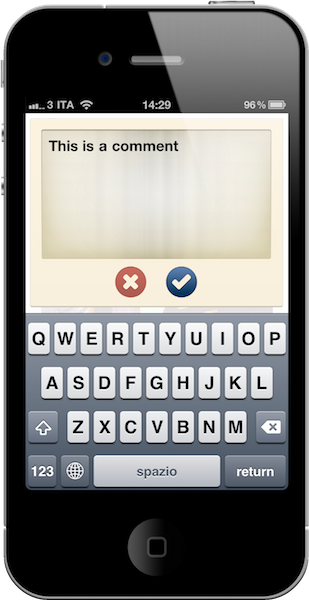 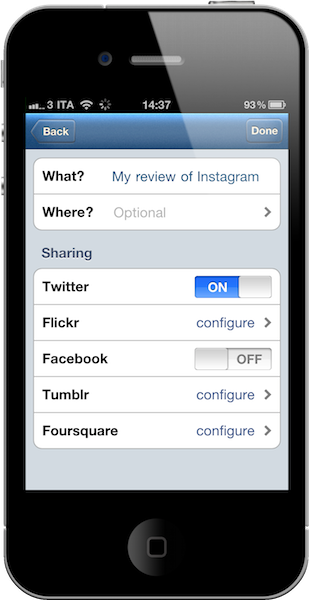