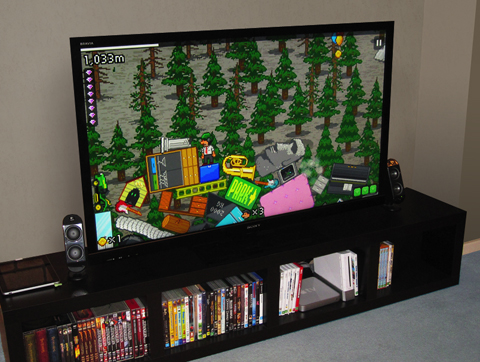 We are big fans of The Incident by Big Bucket Software. Developed by Panic’s Neven Mrgan and Matt Comi, The Incident is a simple and addictive 16-bit styled game where you control a man named Frank who has to constantly jump and avoid obstacles falling from the sky. From our review:

As Frank, you’ll be climbing your way above and beyond mountains of just about anything that might fall from the sky. Couches, minivans, and propeller blades attempt to crush you under their fantastic weight; even with a little pushing and shoving, you’ll have quite the challenge in avoiding dangers from above and below.

Now, after a 1.2 update that brought game controlling from the iPhone, The Incident 1.3 will come to a TV near you. That’s right: you’ll be able to play an iOS game on your television (just like we always used to, remember?) using the iPhone as a remote controller. No technical details have been provided by the developers yet, except that all you need to get the thing up and running is “pluggin your iPad into the TV”. I guess it’s a standard VGA cable from Apple, anyway.

Designer Neven Mrgan explains he had to redraw the game graphics to make it look nice on television:

We’ve been working on something new for the last few weeks. See, we’d really like to enjoy The Incident the way we first played video games: on our TVs. This is totally doable, if you have an iPad and an iPhone/iPod. We will be releasing this new feature very soon in The Incident 1.3. Read Matt’s announcement!

Modern TVs run HD resolutions, which means that our aspect ratio is once again different (16:9) and we have to once again widen the whole thing. The target is now 320 px (x4 = 1280).

Here’s how it works:

And that’s it. You never have to get up to touch the iPad. You do everything from the controller. It works great.

We look forward to seeing The Incident 1.3 running on our TVs, hoping this doesn’t break any of Apple’s rules. If this will get accepted and the Big Bucket guys will share the technology they’re using, we might have the next big thing of iOS gaming on our hands. Literally.

Update: check out the video below!