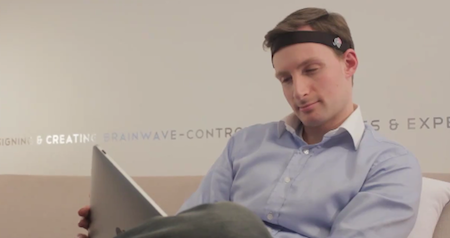 When I was a kid and I tried to imagine what “the future” would look like, I have to admit I could only think of flying cars, spacecrafts and thought-controlled objects. As I grew up and realized flying cars were a no-no and the year 2000 didn’t bring anything new except for a weird computer bug people were scared of, I lost my faith in space exploration (well, at least in the short term) but I kept hoping for thought-controlled gadgets. Because I knew manufacturers and scientists were playing around with the idea and a few prototypes had been demoed at, say, videogame-related conferences.

So what does this have to do with Apple? Fair enough, good question. At the latest CES, InteraXon (a Canadian company) has announced and demonstrated a headset that can connect to iPhones and iPads and allows you to control apps and games with your mind. There, I said it. Technically, this custom EEG headset pairs with a thought-controlling framework that has been added to the popular iPad game Zen Bound 2 game, letting users control the wooden shapes on screen with their brainwaves.

Now the real question is: are you willing to put a headset on to control stuff with your brain? Doesn’t it look a little bit, well, weird? The project is in its early stages, we have time to put some thought on it. Literally.

Video after the break. [via iSpazio]