The iPad is the perfect productivity device, at least for me: I read articles, catch up with the news, write posts, do email and browsing with it. I’m starting to realize that 70% of the activities I used to do on a Macbook can easily be done on the iPad, without compromises of any sort. Sure the iPad App Store still lacks a good WordPress app and a decent FTP client for uploading pictures, but I’m moving my overall daily tasks to this new device. It’s smaller, more focused yet powerful enough to allow me to do stuff without losing the ability to do it well.

Of course I needed a good task manager to manage my todos on the iPad: after the Twitter client quest and the search for a great feeds reading app I decided it was time to install a GTD application to organize, sort and process tasks. As you can guess, the first choice was Things from Cultured Code, an already excellent app for Mac and iPhone which has been ported with a complete interface revamp to the iPad and was also available on day one. I installed Things, but I still have to try it because I’m testing another application now, Taska for iPad from BitAlpha. 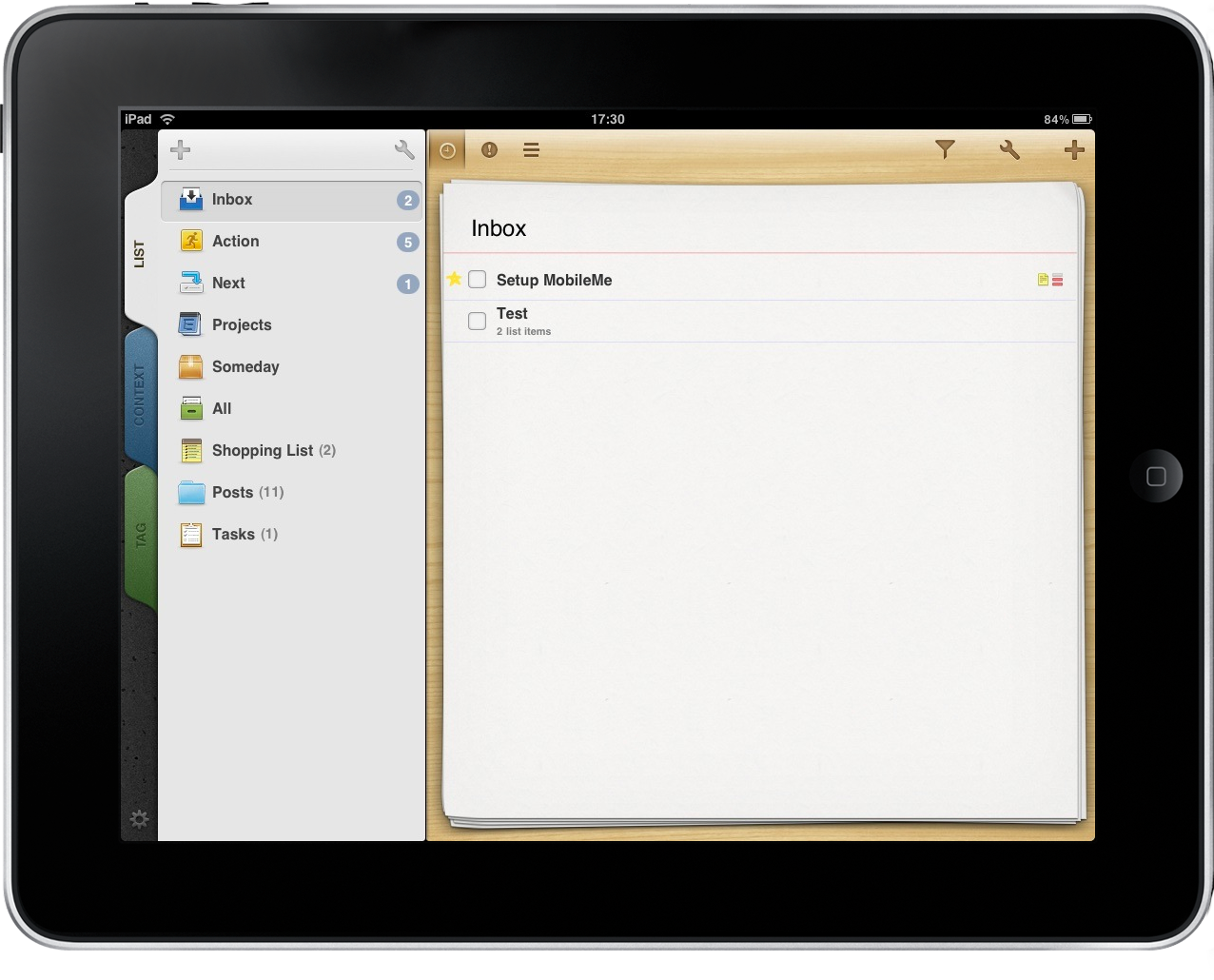 Taska is the usual GTD app that follows the guidelines you’ve gotten used to overtime and enables you to capture tasks, dump them into an inbox, process them, tag them, complete them. The concept behind it is the same of, say, Things and Omnifocus, but the are some design ideas and options which convinced me to check out the app, which Cody reviewed some weeks ago in its iPhone version. My problem, though, is that from a GTD application I want some things, let’s say requisites, that should be met for me to fully appreciate it. I’m talking abbot over-the -air sync, support for projects and contexts, a nice and usable UI, the possibility to enter new tasks as fast as possible, because I don’t want the app to get in my way while working. For this reason it’s a little bit sad that the iPad doesn’t allow applications to support “quick entry” windows like on Mac OS X, where you can just press a shortcut and enter a new task in a few seconds into a floating panel. I hope something like that will eventually happen with the next iterations of the OS, but by now we’re stuck with the manual way to enter tasks: you have to open the app and write. This happens in Things, Omnifocus and every other app: I’m fine with it. The other point that’s really important is online syncing : even though I use my Mac less, I want tasks to be available on every device I might use, be it the iPhone, iPad or Macbook. Omnifocus has OTA sync but the iPad app isn’t out yet, Cultured Code has been promising this feature for months but we haven’t heard official word and Taska for iPhone comes with online Toodledo syncing, which I haven’t tried but I heard it’s going to come in the iPad version as well with the next update. So, basically, I don’t have a GTD app that syncs stuff online: that’s fine too. I guess you can’t have everything in less than 2 weeks, so I’ll wait.

So, I decided to try Taska for iPad and bought it at $4.99 in the App Store. Now before I start talking about its features and how it works: I don’t care about the problems it had with alleged Things rip-off, I’m just a customer who purchased this app from the App Store and wants to talk about it. That said, let’s see if Taska can replace Things for you, and if this is the real new best GTD app for iPad, as many people said on Twitter. 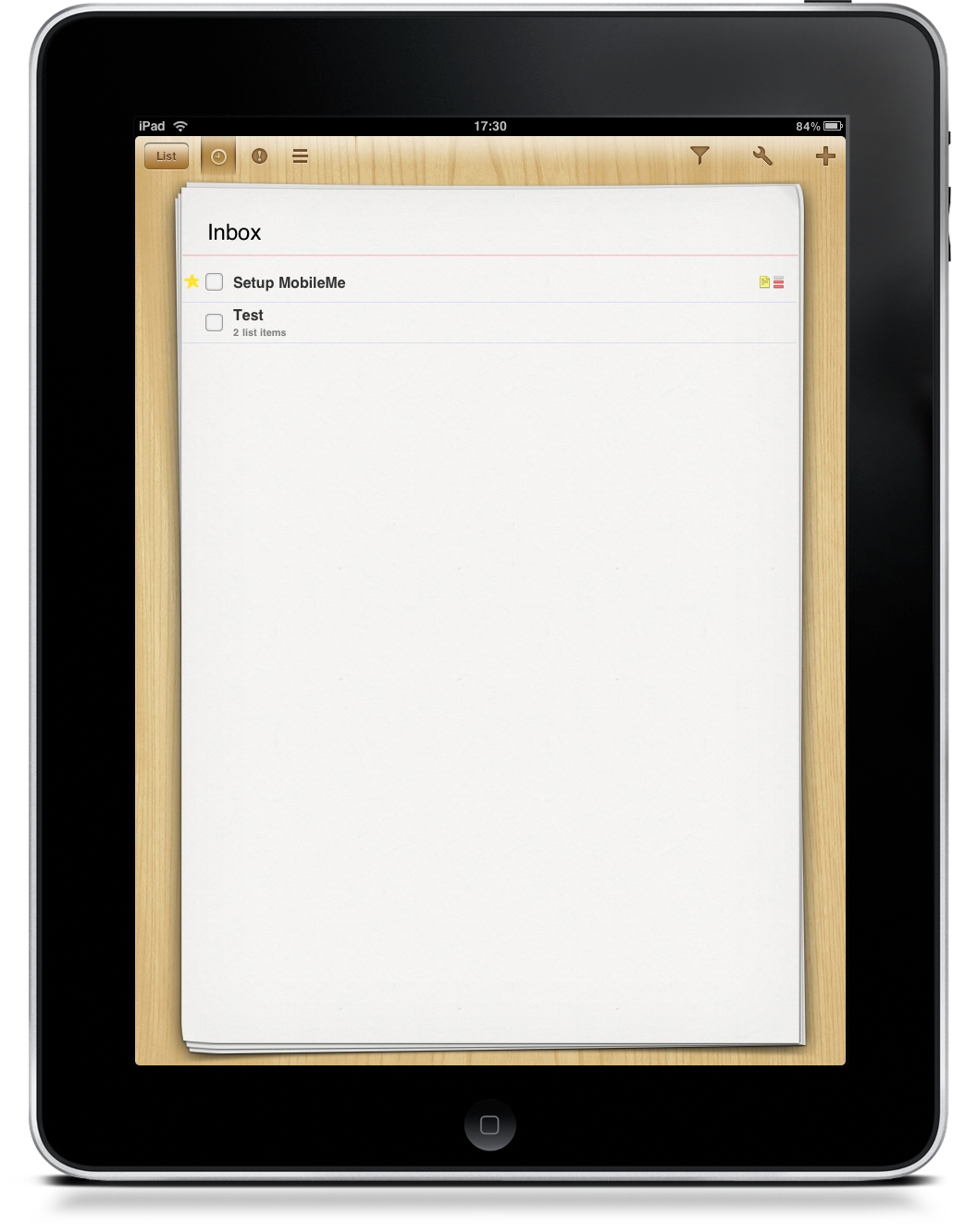 Taska has a very nice interface design: the icon looks good on the home screen, and the app itself uses the metaphor of paper sheets, side cards and wooden background to convey the feeling of a real organizer. It’s subtle and pleasant to the eyes, a real joy to tap around, navigate through the menus and enter new tasks. Another standard that Taska uses is that of the difference between portrait and landscape mode: while in landscape it uses a custom split view, in portrait mode you’ll have a top left button to access the lists via a popover. It works good to me, but I prefer the landscape view (as always). There are three tabs on the left side: list, context and tag. They provide an easy want to access your tasks based on specific criteria you assigned to them like a context (Home, Office) or some tags. I’m not a fan of tags when it comes to GTD but I found myself entering them in Taska. As for the List tab, it’s the one you’ ll spend the most time in, navigating through folders and projects, much like you can already do in other similar applications. 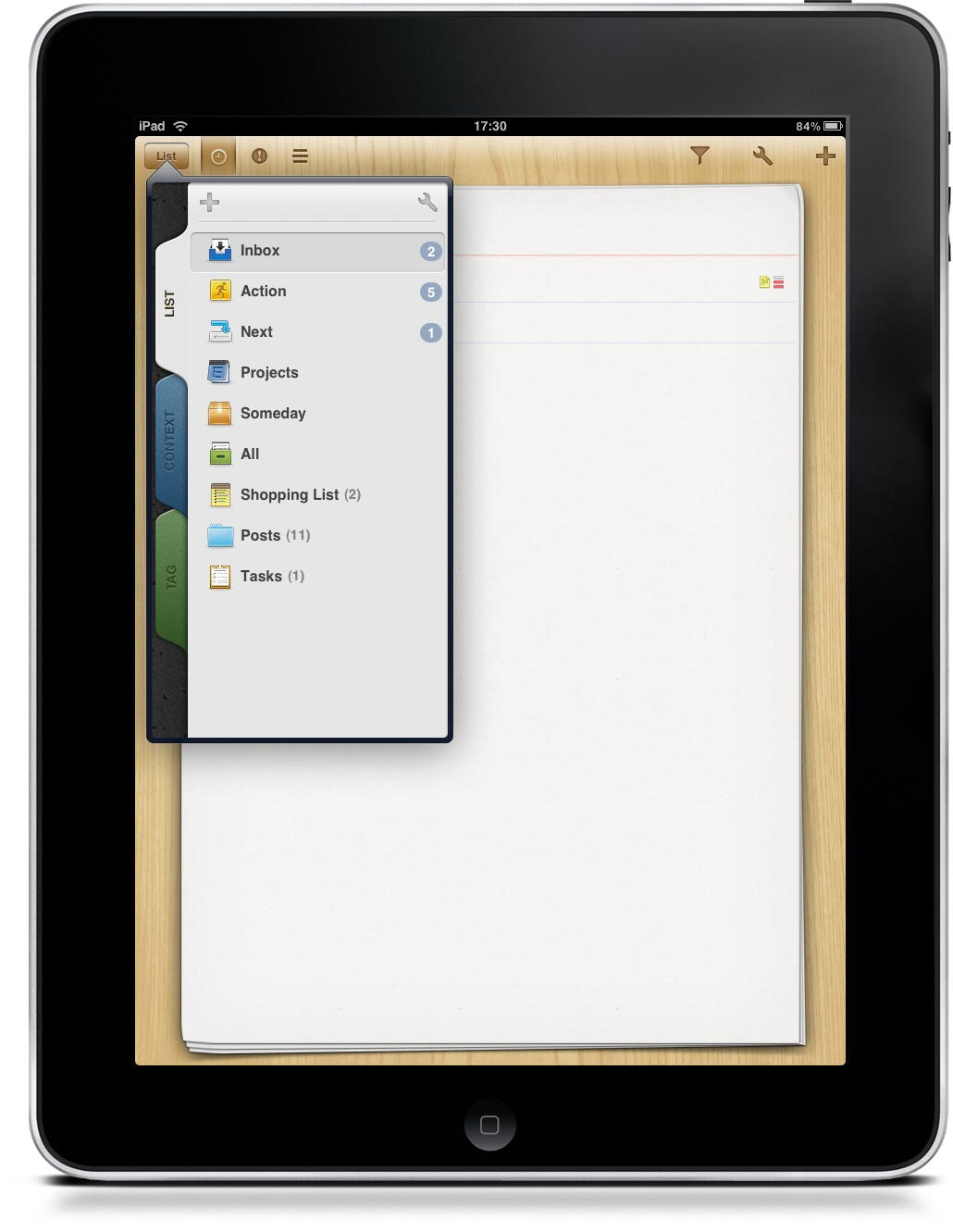 By default, the main window opens the Inbox, which is where you can enter a task to process (assign to a specific folder or timeframe) later. To enter a new task you have to tap the + button in the top right corner and start typing into the modal window that will appear on screen. The new task window is well realized and offers a lot of options: you can enter a title, some notes, tags, contexts, assign a priority, favorite the task, set a repeating date. I appreciated the repeating feature very much, as unlike many other apps it allows you to choose between “set repeating on due date” or “after completion” and then you can choose the actual kind of repeating days. It’s highly customizable and definitely fits to my needs. 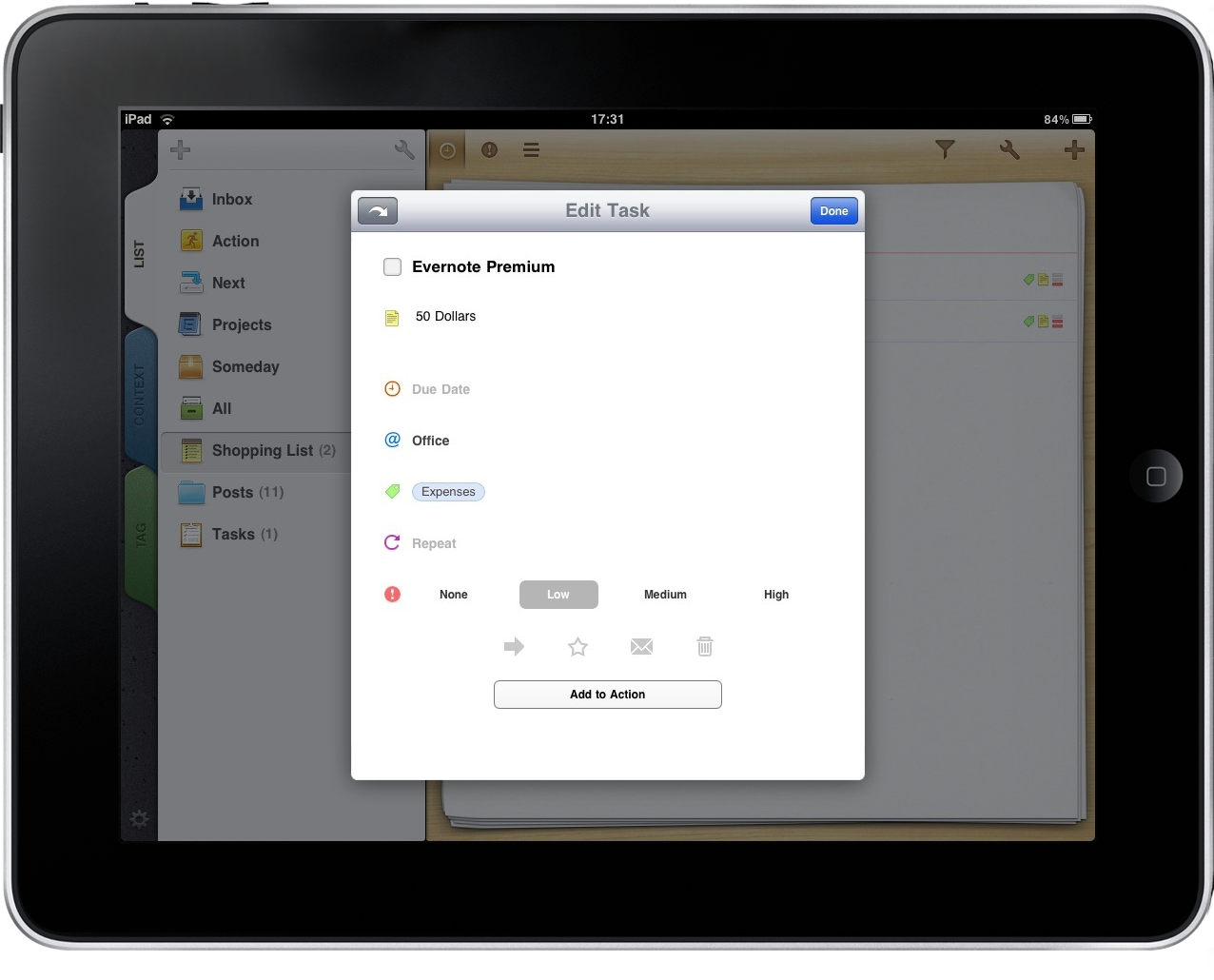 I also liked the possibility to enter a checklist from the new task window, and I think this is one of the real advantages of Taska over its competitors. Basically, a checklist is like a huge task that involves an array of other smaller sub-tasks you have to do before the main one is completed. If I have to write a review of DEVONthink, I can create a checklist and assign sub-tasks like “research”, “write the post”, “take some screenshots” and then “proofread”. Cool thing is, you can also enter a quantity for each sub-item, so this is perfect for shopping lists and such. Last, the graphical layout of both the new task window and checklist is great: the modal window is enriched with small icons for each text field, while the checklists appear in a popover that uses, again, a paper sheet over a background with the same texture you can see when you move Safari’s windows around. 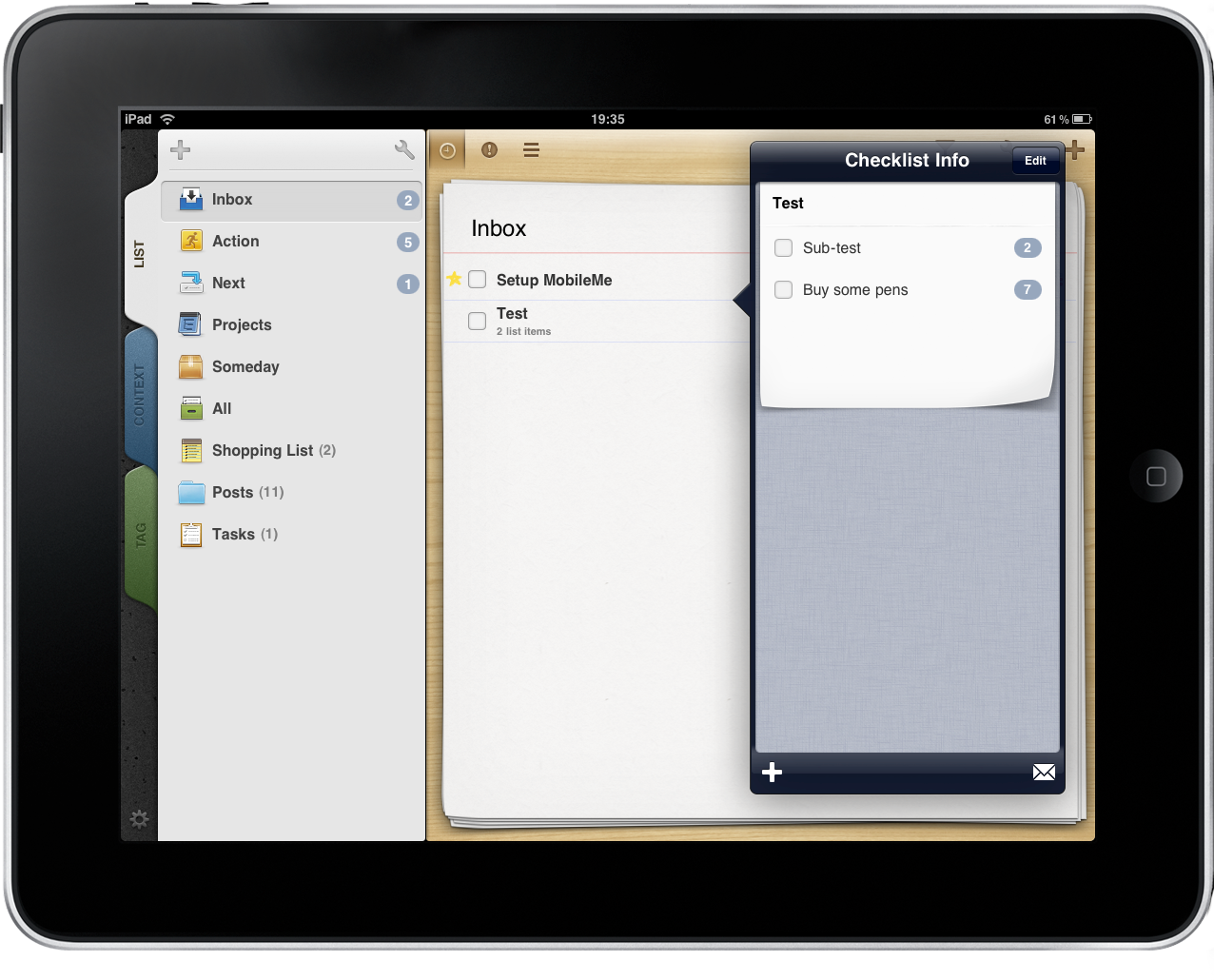 In the Inbox there are some buttons to edit tasks and their order as well. You can of course change how the app sorts tasks by switching to priority or just arrange them manually, but I liked the buttons to apply filters (opens a popover with contexts and tags) and move tasks to another destination. 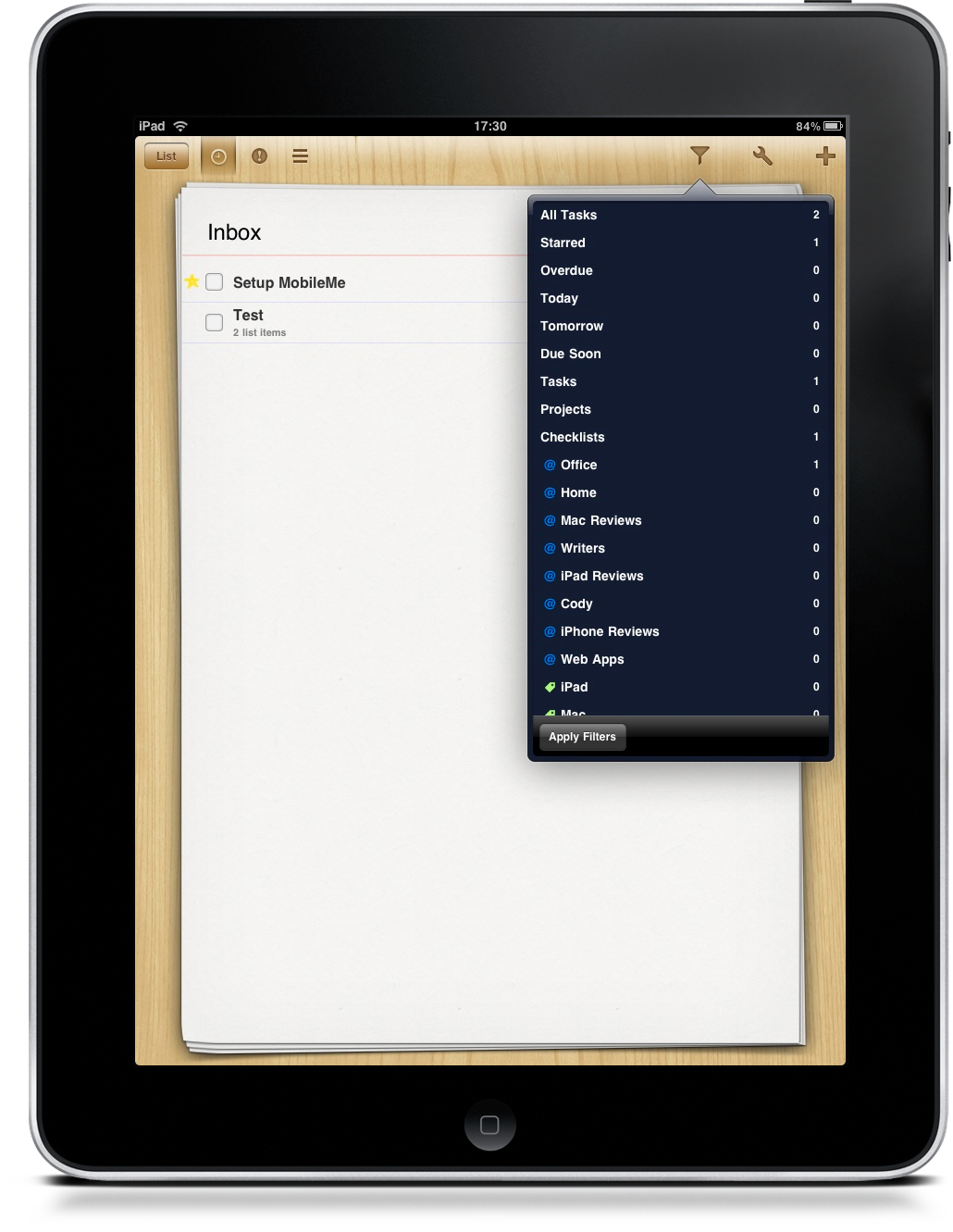 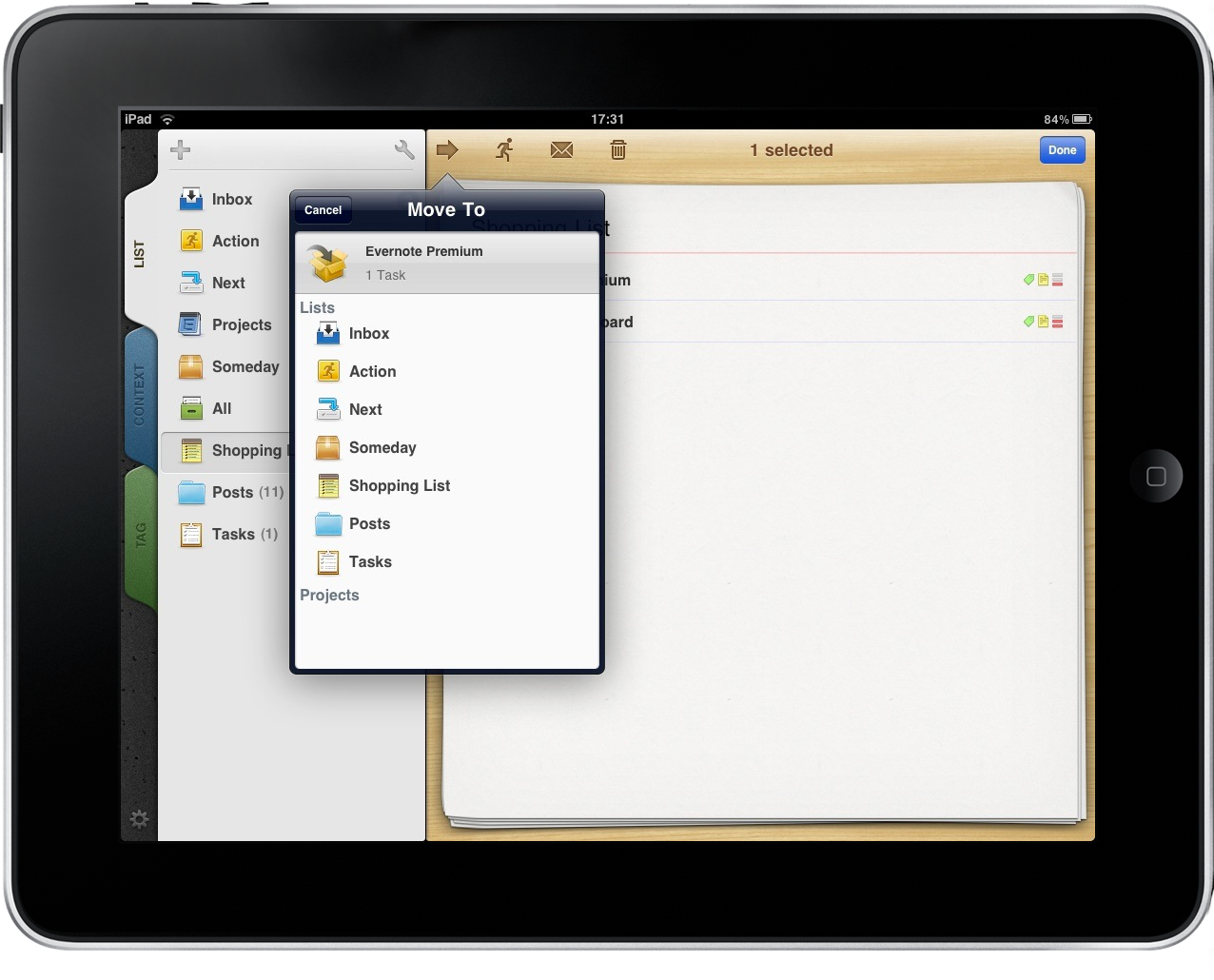 Moving tasks around (what I call processing) is one of the best things about Taska: it’s easy to do, thanks to the iPad’s menus and large screen. You’ll always have everything a tap away, you don’t have to scroll huge lists to retrieve tasks and the process of “working” with them is smooth and painless. You can create as many folders as you want, they will go under the List tab and you can also choose from a set of 10 custom icons. Very nice. Of course there are some default sections like Action or Someday, but ultimately Taska is about enabling you to create your own workspace and customize it the way you want. Obviously you can create Projects, and the tasks assigned to them will launch a popover similar to the checklists’ one. I found myself using folders more, anyway.

There are some features I miss from the app though, and I have to mention them. First, sync: it’s not there yet, but the developer promised it’s coming within a few updates. It seems like it will operate through the Toodledo web service, and I’m curious to try it out. Also, there’s no support for teammates, which Things has and works pretty great too. I definitely would like to see more collaborational features in Taska, perhaps with extended support for mail or other online services. A Basecamp sync tool would be perfect. Last, I miss the possibility to link a specific email or file to a new entry: I know the iPad has its software limitations, but I also know that a workaround is always possible. You just need to be creative and find a way through.

I like Taska, I use it in a daily basis and I will keep using it until I will try Things and see if it’s worth to change from this environment to Cultured Code one. If you still kiss a good GTD app from your iPad, Taska is highly recommended.