A few apps changed my workflow the way Simplenote did. Soon after John Gruber’s public endorsement of Simplenote for iPhone, I decided to give the app a try, as I needed a fast and reliable solution to organize my notes.

I remember those days. In the early days of MacStories there was no team behind the website you see now, and I didn’t know back then I would need a cloud solution for my posts someday. Heck, I used to write posts in Pages.

Eventually I realized I needed to be able to start a writing session on my Mac, and finish it at my girlfriend’s place if I had time. Or, I could just jot down a few ideas while on the go and turn them into posts later. As I realized that, I tried Simplenote.

See, I try many new apps every week. Sometimes I think that it’d be interesting to keep on refining my worfklow (thus changing my app setup) and see what happens. You know my problem with financial apps, right? I can’t stick with one. I used to have the same problem with Twitter clients, but after many reinstalls and downloads (“I’m gonna delete it from iTunes, so I won’t be tempted to install it again.” Sure.) I found my way with Twitterrific on the iPhone and Osfoora on the iPad. Like I said, sometimes I think that this is just an interesting experiment a blogger can keep on doing just for the sake of it. If the results are good, even better.

I never switched from Simplenote to another note taking app. I never, never thought of deleting it and trying something else. Some applications are developed with the precise intent of letting them evolve over time. Despite the updates released in the past months, Simplenote was a complete app from the start.

Some apps are made to stay. And last night, Simplenote for iPhone and iPad got a lot better. 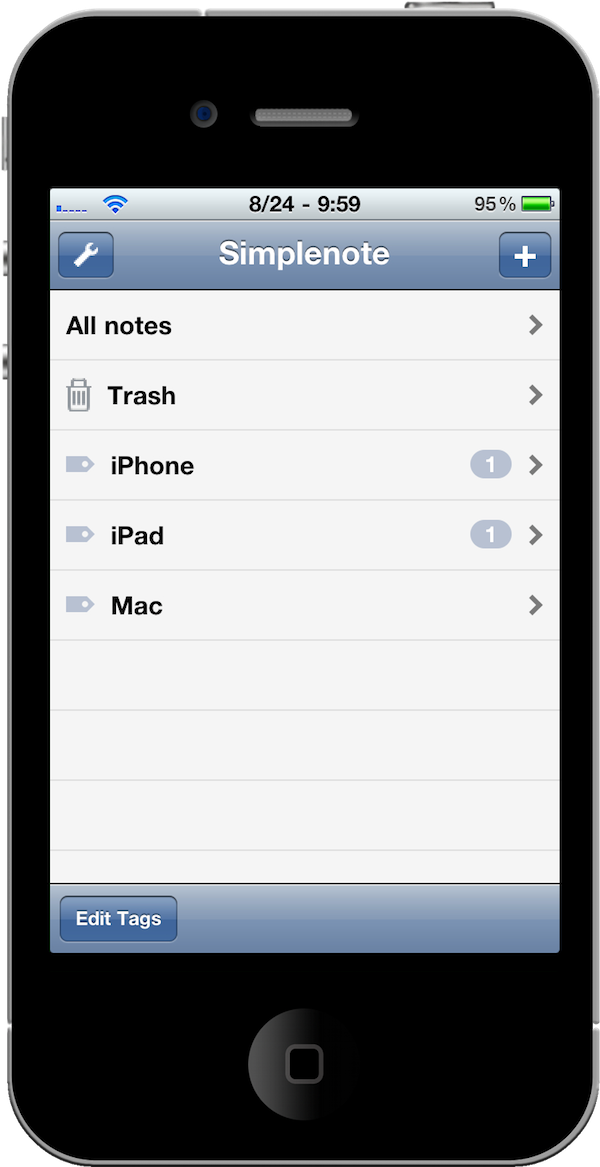 Actually, Simplenote for iPhone, iPad and Web got a lot better. Not only Simplenote is universal on Apple’s devices, the service is backed up by a great-looking (cheers to John Hicks for the stunning redesign) web interface that works and looks just like the mobile counterparts. Not to mention the infinite series of widgets, scripts, services and 3rd party apps that work with Simperium’s note taking tool, but that’s another story.

In case you missed my previous mentions of Simplenote (or the early days of MacStories, for that matter), a quick summary: it’s a cloud-based note taking tool that allows you to, ehm, take notes and save them online. Period. Hence the name Simplenote. All of this is packed inside a minimal (yet beautiful) UI and a set of features that make this app one of the most used tools among casual users and pros. That was until two days ago, because now (version 3.0.2) Simplenote is quite different.

This is a change for the better.

In fact, let me just tell you the story behind this article. This line should have been different: I was writing the post on my Mac, then WordPress screwed up and I lost three paragraphs. I was talking about the interface design of this new version when I lost everything. I deserved that, because I wasn’t using Simplenote. I was too lazy to leave my desk and pick up the iPad from its case and start writing. If I used Simplenote, this would have been a different article. After that I emailed myself a copy of what was left, fired up Simplenote on my iPad, opened the iPad tag and pasted the note. So here I am writing this thing all over again.

Yes, the new version of Simplenote has tags. And before you start screaming like a bunch of Bieber fans because the developers added this feature, just think about it. Simplenote is a place where you dump stuff: text notes, lists, quick ideas, even links. Personally, I use it to store my MacStories posts and anything else that I happen to think of (and find interesting enough to think of again in the future) every day. Sometimes I email myself links of stuff I want to check out later and save them into a unique Simplenote “Web” note. Simplenote is an anything bucket for notes. Now, when you dump stuff in a place that place becomes crowded. So instead of letting broken navigation and organization take over a great app, the Simperium guys decided to add tags (not folders) to the mix. Tags are dynamic, folders are not: they come from the desktop, where you’re used to move files between folders and leave them there for an unspecified amount of time. Now I can separate my work notes from the personal ones, open the app and focus only on, say, iPad-related notes. Simplenote gains an incredible advantage from this new feature.

There’s no really much to say about the user interface design of Simplenote: it’s clean, minimal, beautiful. The iPhone version is very straightforward, the iPad one shows some skeumorphic design love with its paper stacks effects and so does the web app. Everything is polished and refined.

Also new in this version are fullscreen mode, a “pin note” command, easy sharing and note revisions. As for the possibility to pin notes on top of the list, it’s pretty useful but no big deal, really. At least not for me. I highly appreciate the possibility to share notes with others, though, especially considering how simple it is: tap a button and you’re sharing a note with someone else via email, or just publish it as a web page and share the URL with anyone you want. Like I said, this will save hours of collaborative editing to bloggers. Last, the fullscreen mode is the icing on the cake. Killer feature, I say.

There are tons of other minor improvements here and there, but this is how I use Simplenote: a note taking app for everything and anything, something that backs up my stuff in the cloud and that even allows me to go back in time and select a previous version of what I wrote. Is Simplenote still the best note taking tool out there?

I guess there’s no doubt about it.

Simplenote is available for free in the App Store.