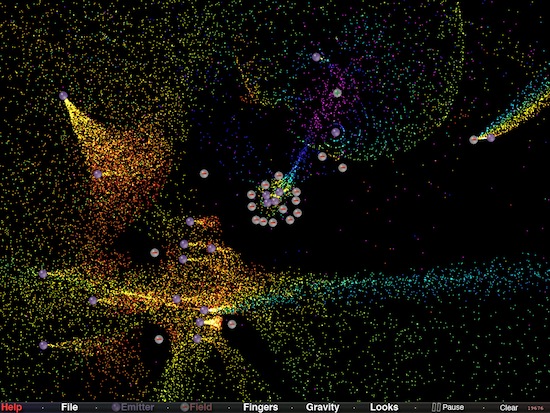 Soon after the iPad came out and Apple launched an App Store specifically meant for it, an app quickly jumped to first position of the charts: Uzu. The app, launched as free and eventually priced at $1.99, is a neat particle visualizer that supports multitouch input and allows you to create patterns with your fingers. Check our demo video here if you missed.

Ions, developed by Douglas Applewhite and available in App Store at $0.99, is an equally impressive particle visualizer that, unlike Uzu, gives you more control over the particles of light moving on screen. In fact, Ions might just be the most powerful and technically advanced particle visualizer we’ve seen on the iOS platform. The app comes with different particle light styles that you can switch at any time; you can control gravity with a slider or de-activate it from a popup menu; most of all, you can place emitters and negative fields on screen to control the movement of particles, which can go up to 20,000. Everything runs at 60fps and I haven’t noticed a single slowdown in my tests. Even with the maximum amount of emitters and fields particle were still running smoothly and fast.

You can also control the amount of particles released by an emitter, adjust the orientation and speed of the flow. Once you’ve achieved an interesting layout, you can save it and load it later to show it to your friends.