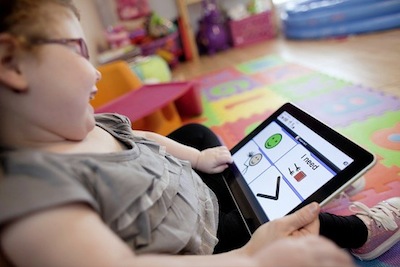 This is one of the stories that best shows what it’s possible to do with modern technologies, some basic development skills and the real need for something a consumer-oriented product like the iPad doesn’t ship with by default. Victor Pauca is a 5-year-old boy who has a very rare genetic disorder that prevents him from developing skills like speech and the overall ability to communicate with others. To help him, his father created an iPad app that turns the touch screen into an easy to understand communication tool.

The app, called VerbalVictor, will be released later this week in the App Store at around $10.

VerbalVictor allows parents to associate speech with pictures and make these pictures “buttons” to place on screen so that kids can press them to communicate their thoughts and needs. A picture of a backyard, as the Huffington Post reports, can be associated with “I want to go play outside”, for example. This is a really simple concept for an app, yet can become a useful tool for parents and caregivers that have to communicate with disabled children. The app records voices, it hasn’t got weird, robotic ones built in.

We heard the story of a paralyzed boy using the iPad to communicate and interact with his parents, and this father’s effort to create an app just to help his boy and hundreds of others like him is equally moving.

“We’re not a big-budget operation, and that allows us to sell it for $10,” said Tommy Guy, who is one of Pauca’s students and is now a Ph.D. candidate at the University of Toronto.

Jim Tobias, president of consulting firm Inclusive Technologies and an expert on disability-accessible technology, points out that VerbalVictor takes advantage of general-purpose, mass-market gadgets that cost hundreds of dollars rather than thousands.

People who already own an iPhone or iPad need to pay only $10 more for the app, “instead of taking a risk with $1,000” with specialized machines, said Tobias, who is not involved with the project.