I’ve been thinking about this for some months now: what could be the right way to “multitask” on the iPad? Some say we humans can’t really multitask. For the sake of the argument, let’s just say that we want to argue on whether Apple’s way to switch between paused apps on the iPad could be better or not. I think that, with a few tweaks, iOS 4.2 could bring a deeply different experience from the iPhone on the iPad. 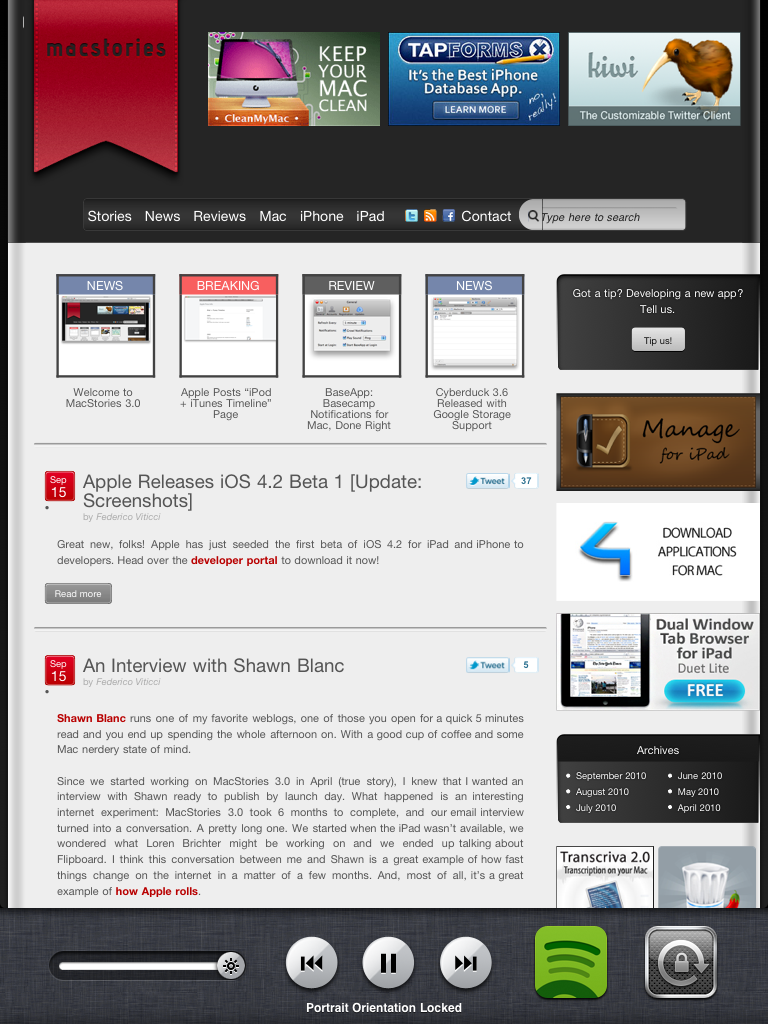 I’m no UX expert, I just have a few ideas to throw out there. I think that the multitasking tray feels a little bit awkward on the iPad: it’s too big. Especially when in landscape mode, it feels weird to be forced to stretch your thumb down to the bottom part of the screen to change app. Either that, or you have to hold your iPad with one hand. Same applies for portrait mode, but I feel this problem more in landscape. The reason is simple: depending on the orientation of the device, placing the multitasking tray on the longer side would feel awkward.

That’s why I’m skeptical about this idea of placing the multitasking tray on the side by default: while it’d be great in landscape, it’d be just the same problem all over again while, say, reading in iBooks. Circuitous (a Cydia app that brings some sort of multitasking tray to the iPad via jailbreak) in portrait mode proves me right.

So here’s the thing: if we think of the multitasking tray as OS X dock (a quick way to switch between apps), it would make sense to offer users the possibility to set the position in the Settings. This concept raises even more questions, though: you don’t change the orientation of a Macbook, so you don’t have to tweak the behavior of the dock for portrait or landscape. Would users be supposed to dig through 3 layers of settings to adjust multitasking to their tastes? Not Apple-like at all. And what about casual users who really don’t give a damn about settings? Would they experience a half-baked multitasking just because they don’t want to play around with Settings? I have my doubts.

Personally - as a geek -  I would love to be able to tweak multitasking to my own needs. I can perfectly understand, though, that more settings and options bring more “clutter” to the whole experience, and Apple wants the exact opposite: making the iPad an easy yet powerful device.

Multitasking is at its first iteration with iOS 4. iOS 4 is about to reach its second version with 4.2 - there’s a huge room for improvement and new ideas. It’s a long way to iOS 5, and you never know what the engineers at Cupertino may come up with. What’s for sure is that the iPad with multitasking feels like a brand new device.