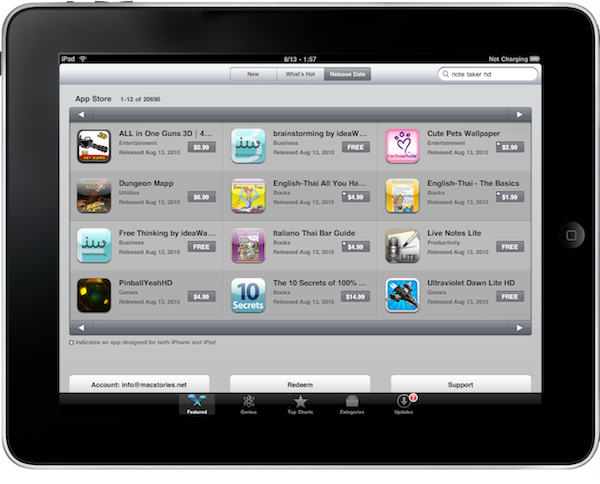 Two interesting tidbits from today’s Apple iOS 4.2 press release you might have missed with all the excitements for the new OS:

iPad users can now run their favorite apps and switch between them instantly, while preserving iPad’s legendary battery life.

Today, customers have downloaded more than seven billion apps from the groundbreaking App Store and more than 300,000 apps are available to consumers in 90 countries, with more than 40,000 native iPad apps. Over 125 million iOS users around the world can choose from an incredible range of apps in 20 categories, including games, business, news, sports, health, reference and travel.

While Apple isn’t new to using peculiar adjectives to describe their products (just think of the “magical” iPad), the data provided in the press release are definitely noteworthy.

In June we reported 10.000 iPad apps were available. That was 2 months after the official release of the tablet, and we thought it was a stunning result. But wait, because in a matter of two months the bar raised to 20.000 apps available. Apple was basically accepting 5.000 apps per month, and while we initially thought that around 35.000 apps would be available by the end of the year, 30.000 apps were already available a month later, in September.

Apple now says over 40.000 native iPad apps are available, and I wouldn’t be surprised to see 50.000 out in the App Store before the end of the calendar year. With this in mind, think about what Steve Jobs wrote in today’s press release:

Once again, the iPad with iOS 4.2 will define the target that other tablets will aspire to, but very few, if any, will ever be able to hit.

There’s no doubt developers are all jumping on the iPad bandwagon, and it’s going to be really difficult for all the tablets coming out next year to catch up. Why does this remind me of the iPhone in 2008?