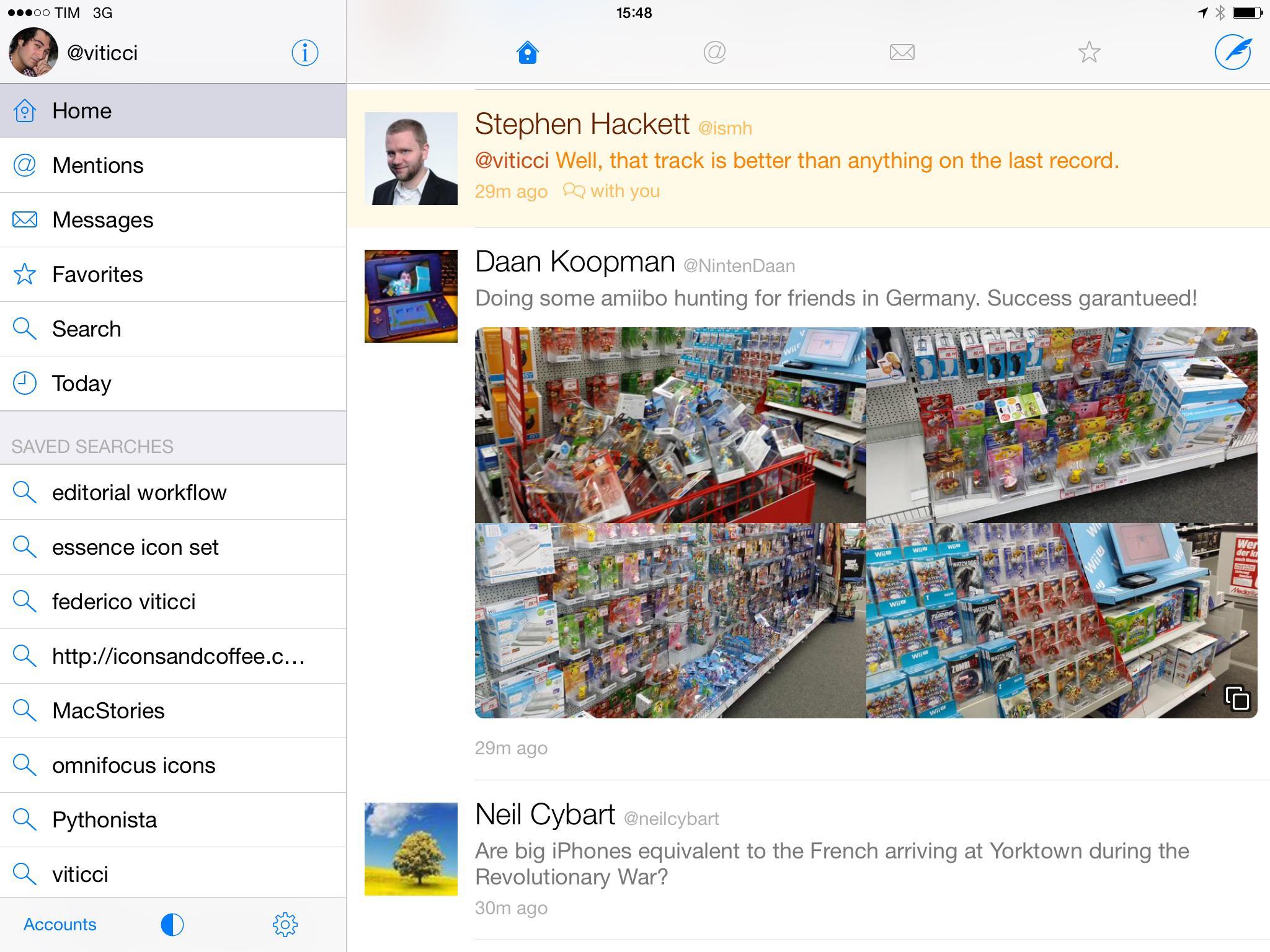 In my in-depth look at Twitter clients for iOS from December 2014, I noted Twitterrific’s fantastic support for iOS 8 extensions and thoughtful design touches, but lamented the app’s lack of integration with modern Twitter media features. In particular, Twitterrific didn’t support multiple images in tweets and animated GIFs; compared to Tweetbot, Twitterrific didn’t have inline playback for popular third-party sharing services such as Vine and Instagram either.

With today’s 5.9 update, The Iconfactory has considerably improved their client’s media preview capabilities by bringing native integration with the aforementioned services and support for Twitter’s GIFs and multiple images. Furthermore, Twitterrific has gained minor but welcome changes such as the ability to save source tweets to Pocket and show a user’s mentions by long-tapping a profile picture.

The lack of multiple images in tweets was the worst offender in older versions of Twitterrific, as it effectively changed the way some tweets looked in the timeline by removing attachments that were displayed in Twitter’s official apps and Tweetbot.

With the latest version, I find Twitterrific’s implementation of multiple images to be superior to any other Twitter app (including the official client). Multiple images carry a badge in the lower right corner of their inline preview to properly indicate that a tweet contains multiple images (useful to distinguish tweets that actually contain multiple images from those that “fake” multiple attachments as a grid of images). You can swipe through multiple photos and check their order with a page indicator at the bottom; and, you can tap individual thumbnails to directly open a specific attachment. You can also post up to four images in a tweet as you can in Twitter and Tweetbot (but without the effects and editing tools available in the official Twitter app).

In the timeline, besides multiple images and native GIFs, Twitterrific can now render previews and inline playback for Vine, Instagram, and Moby videos. This is a good addition as popular sharing services now require less taps to view media posted to Twitter.

But there’s more. According to Twitterrific’s release notes, the app now has support for “rich media previews for a wide variety of links”. As someone who’s deeply used to Twitter Cards at this point, the feature caught my attention and I immediately started hunting media links in Twitterrific. To my surprise, Twitterrific now shows thumbnails for iTunes content, SoundCloud files, and even Kickstarter campaigns. The latter is especially interesting, as Twitterrific pulls in a Kickstarter video from a campaign link and shows a native thumbnail with a player in the app without having to include a video URL in a tweet. 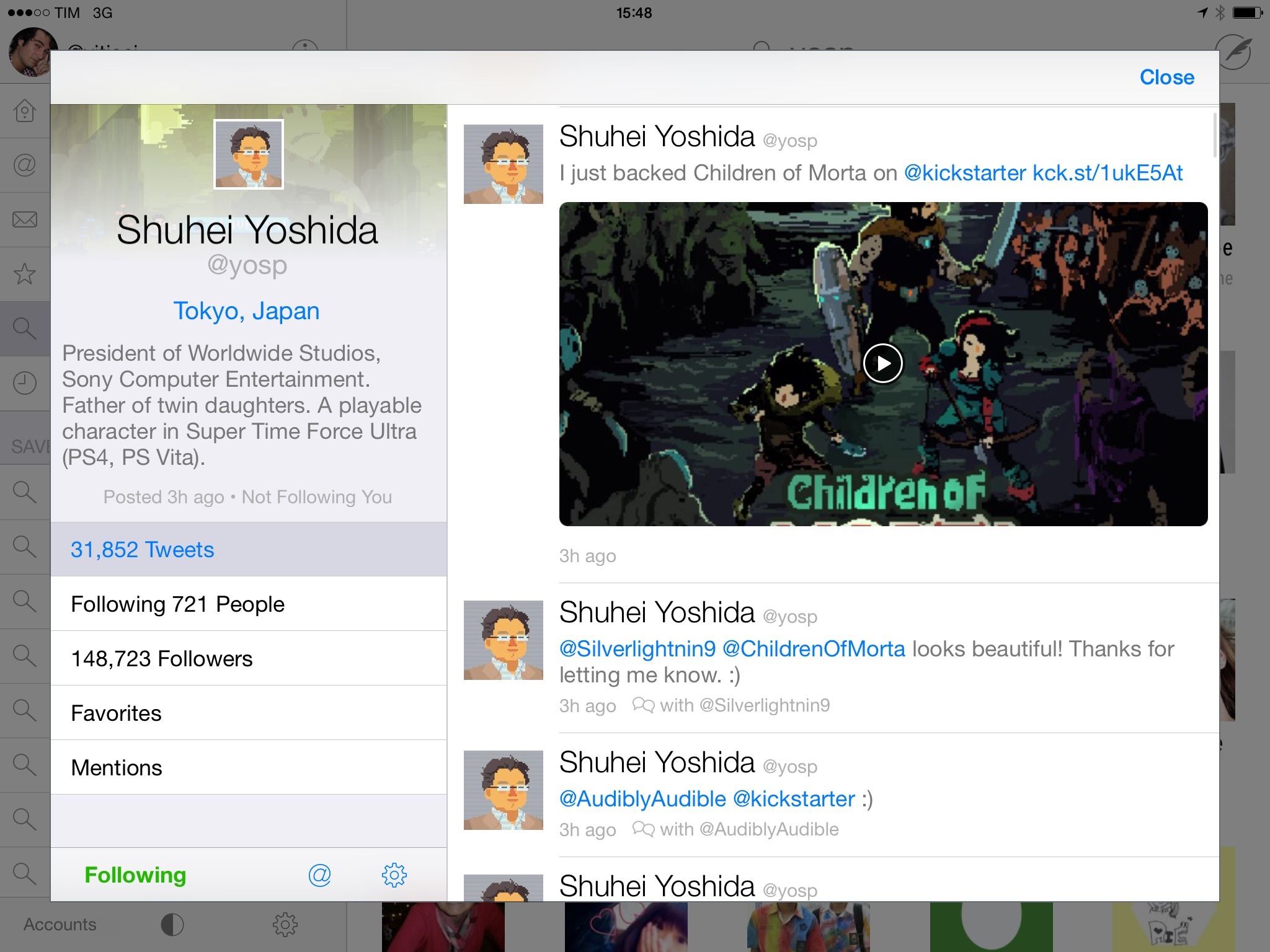 A Kickstarter video thumbnail in Twitterrific 5.9.

If you’ve used the Twitter app for iOS, this will sound familiar. Kickstarter implements Twitter Cards with campaign summaries and videos, but Cards aren’t directly exposed to developers over the Twitter API. This means that the Iconfactory has built its own media preview feature for Kickstarter links in a way that’s similar to the official Twitter Cards, which is extremely interesting to me. As I wrote in December:

In the months I’ve spent using the Twitter app, I’ve come to expect my Twitter client to support multiple photos, native GIFs, summaries for web articles, and other static or interactive previews with Cards. I want to be able to listen to SoundCloud snippets in the timeline with a mini player, and I appreciate that Twitter gives me the tools to let people subscribe to my newsletter easily and securely.

Of course, what The Iconfactory added isn’t the full Twitter Cards experience – it’s an extended media preview, enabled for certain types of links without the full set of integrations found in Twitter. However, I think it’s a smart decision, elegantly implemented, and it puts Twitterrific’s media support above Tweetbot at this point thanks to the larger selection of links the app can preview in the timeline.

Update: As confirmed by The Iconfactory, there’s a full range of links that the app now supports with rich media previews. These include Spotify, Bandcamp, Pinterest, Etsy, and even links to images shared from FiftyThree’s Paper app. You can find the full list in a tweet by The Iconfactory’s Sean Heber below.

@viticci @Twitterrific this is most of them: https://t.co/upROHp8HYQ Some are conditional depending on URL. More will probably be added.

In spite of the limitations imposed by Twitter and the difficulties involved with working with the Twitter API, The Iconfactory continues to raise the bar for what is possible in a third-party Twitter client. There are dozens of subtle touches in Twitterrific and the latest update reinforces the app’s minimal but powerful rendition of Twitter. Twitterrific still lacks some of Tweetbot’s advanced options and it obviously can’t compete with Twitter’s first-party features, but it continues to be updated with clever ideas and version 5.9 deserves a look.