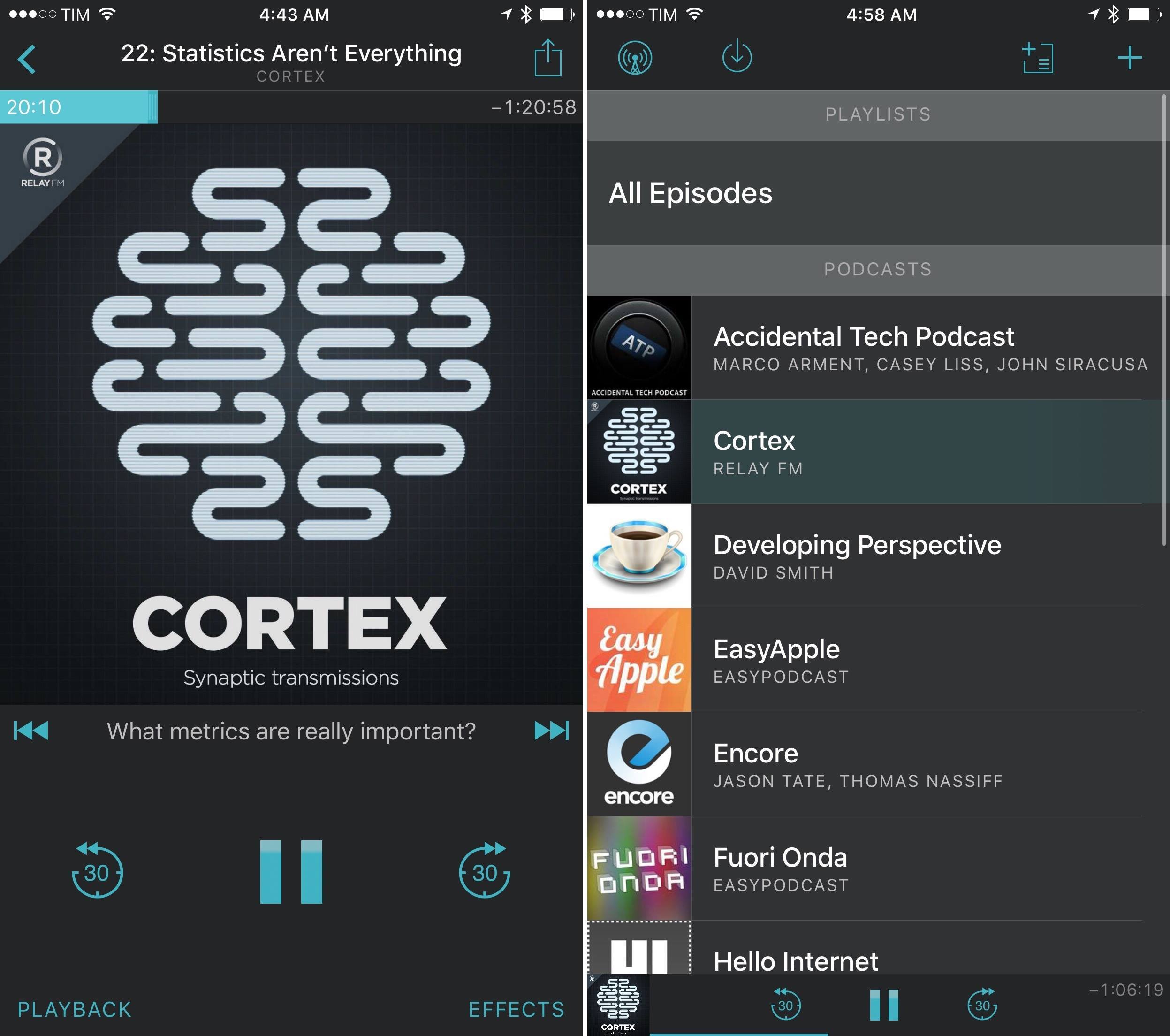 When it launched in October with support for streaming and chapters, Overcast 2’s patronage model was positioned as a way to directly support the app without the promise of anything exclusive in return. With Overcast 2.5, launching today on the App Store, Marco Arment is introducing the first features available only to Overcast patrons: a dark theme, and the ability to upload audio files to Overcast’s cloud.

Overcast’s dark theme can be enabled in the app’s Settings under ‘Patron Features’, and, as the name suggests, it’ll switch Overcast’s to darker tones – dark gray and light blue toggles. 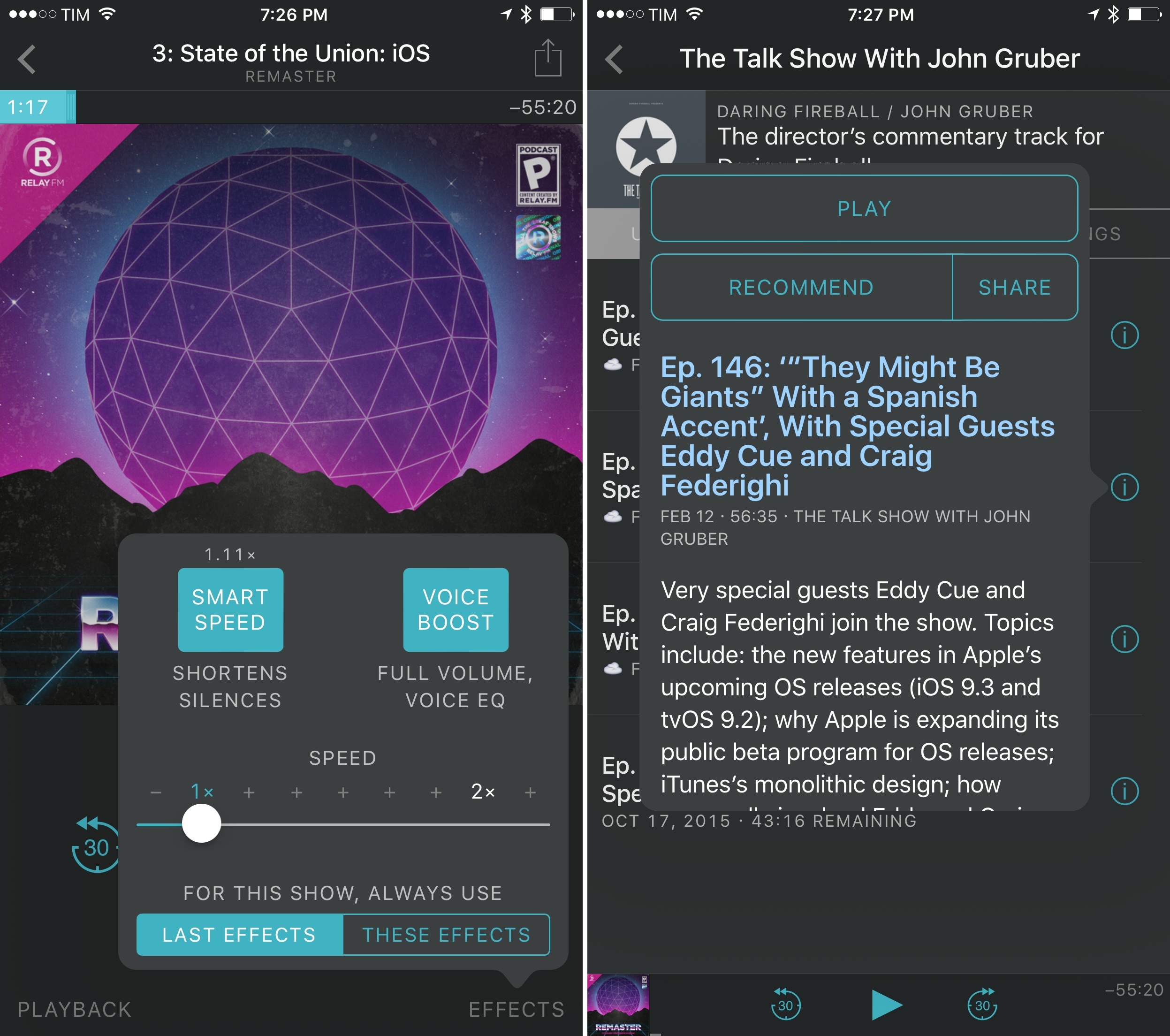 Like some of the best dark themes seen in other iOS apps (most notably, Tweetbot, Narwhal, and Drafts), Overcast’s new dark option doesn’t simply switch some of the UI elements to black; instead, Arment has considered every screen and every button, coming up with a tasteful color palette that retains legibility and, especially in low-light situations, makes the app easier to look at.

The side benefit of enabling dark theme is that, in addition to bringing a different color scheme, it changes Overcast’s marquee Concourse typeface to Apple’s San Francisco font. I was initially skeptical about the decision; Concourse is, after all, one of Overcast’s most recognizable traits. After a few weeks of using Overcast 2.5, though, I think San Francisco is a good match for dark backgrounds and popovers. If Apple ever comes up with a dark theme for iOS, I believe Overcast 2.5 would make for a fine template to draw inspiration from.

A tour of Overcast’s dark theme.

I’m usually not a fan of dark themes – I’m okay with predominantly white interfaces (and iOS 9.3’s Night Shift filter makes apps more comfortable to use at night), but I’ve grown to like Overcast’s a lot. The combination of San Francisco with dark gray and light blue interface elements looks nice, and I haven’t found myself missing Overcast’s traditional white and orange mix.

The other major addition in Overcast 2.5 are file uploads. If you’re a patron, you’ll be able to go to overcast.fm/uploads and upload up to 2 GB worth of audio files, with a limit of 250 MB per file. This is useful if you often come across episodes that you’d like to listen to without subscribing to their feed in Overcast, or if you have to listen to audio files that aren’t available on the web, such as pre-production podcasts, interviews, or audiobook files ripped from your computer. These files will show up in a special Uploads section of Overcast; like podcasts, you’ll be able to stream them or download them locally on your device. 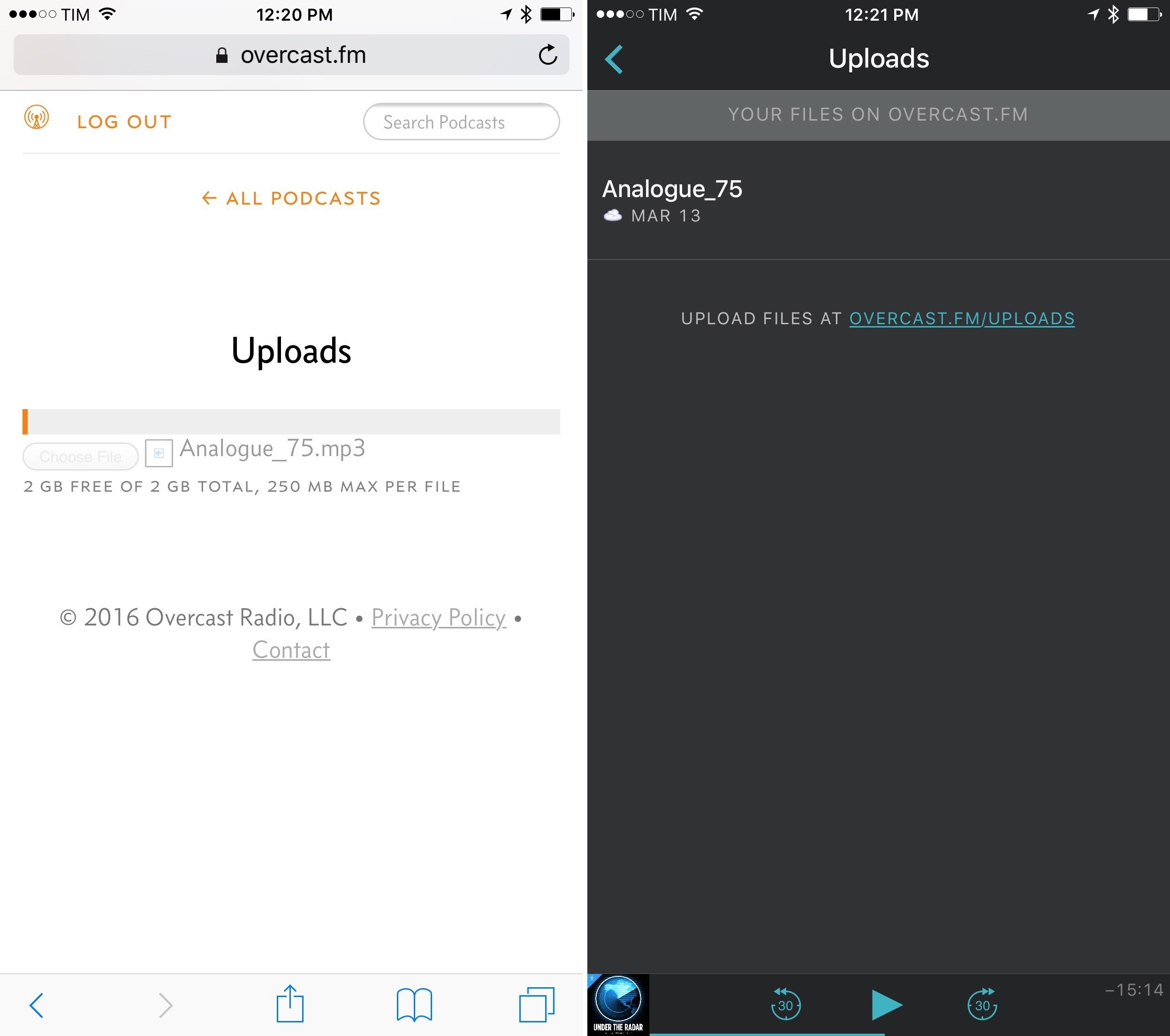 There’s an important distinction to be made between Overcast and another popular solution to listen to individual audio files, Huffduffer. Unlike Huffduffer, Overcast doesn’t create an RSS feed from podcast files saved from the web, nor does Overcast let you add files by pasting URLs to their MP3 versions on the web. Overcast’s file uploads are exactly what the name implies – files uploaded from your device, privately stored under your Overcast account. While I would have liked to see Arment take on Huffduffer with his own web service to save podcasts for later1, it makes sense to limit Overcast to a standalone player without the added complexity (and responsibility) of managing a web app to mix and match podcast RSS feeds.

There are other changes for all users in Overcast 2.5 worth pointing out. Voice Boost, the app’s audio effect to make podcasts sound better and louder, has a separate, custom-tuned profile for the iPhone’s speaker.2 The visualizer has been redesigned: it’s now integrated with the Pause button, it uses less battery, and, in my opinion, it’s more subtle and elegant than the old, bigger visualizer.

Battery consumption has indeed seen several notable improvements in this release. In a blog post, Marco Arment has shared the details behind the optimized audio engine and revised visualizer:3

Overcast was already pretty efficient, but the EQ-bars visualizer was a significant battery drain (and was so distracting that a very large portion of users had disabled it), so I’ve replaced the visualizer with a smaller, simpler, far more efficient one inside the Pause button:

After many hours of experimentation and optimization, I’ve highly optimized Overcast’s audio engine and UI to match or exceed the efficiency of Apple’s built-in Podcasts app in normal playback.

There are also a couple of “finally’s” in this release: adding shows from the directory no longer takes you back to the main screen and you can now batch Add or Delete All from a show’s page.

With new features for all Overcast users, version 2.5 of Marco Arment’s excellent podcast player continues to offer benefits that can’t be found anywhere else. Unique audio effects, now with decreased battery consumption; a rich directory, with highly diversified recommendations; and now, a dark theme and file uploads that bring even more value for patrons.

Overcast is where I want to listen to podcasts, and version 2.5 is available on the App Store.