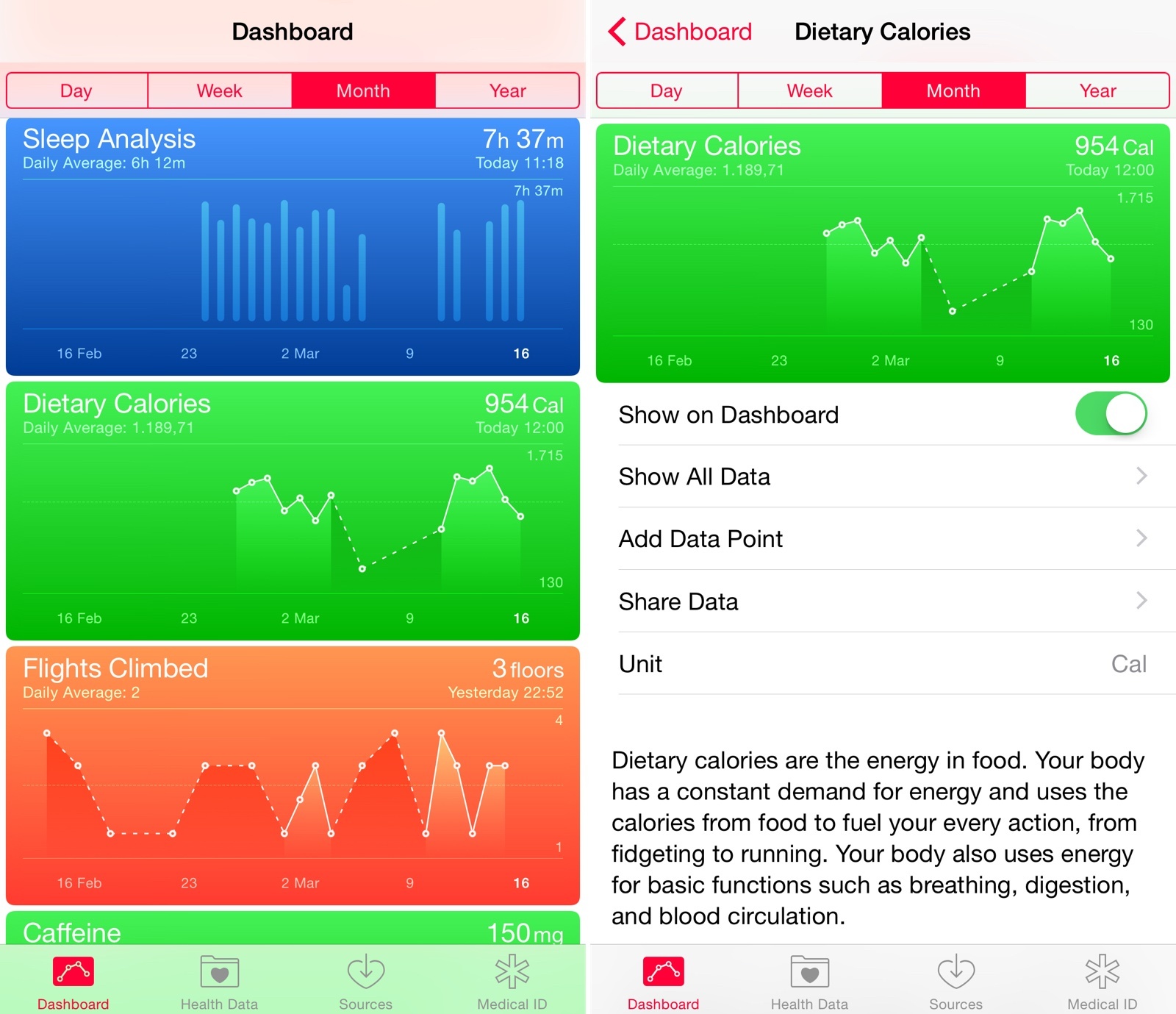 Last week, Apple released iOS 8.2, bringing a variety of improvements to the built-in Health app and other general enhancements and bug fixes. Almost two weeks after publishing my Life After Cancer article, I thought I’d briefly mention the changes introduced in iOS 8.2 and follow-up on some of the apps I originally covered in the story.

In my experience (but I’ve been able to confirm this with several users as well), iOS 8.2 makes the Health app faster by reducing the time needed to load data in the graphs. I keep about 10 categories pinned to my Health dashboard, and, before iOS 8.2, graphs required at least 3 seconds to load. iOS 8.2 has made the app considerably faster and this applies to third-party apps as well – the HealthKit framework has also been sped up, so apps that use it no longer get stuck in trying to parse Health data (such as Lark, but more on this in a bit). 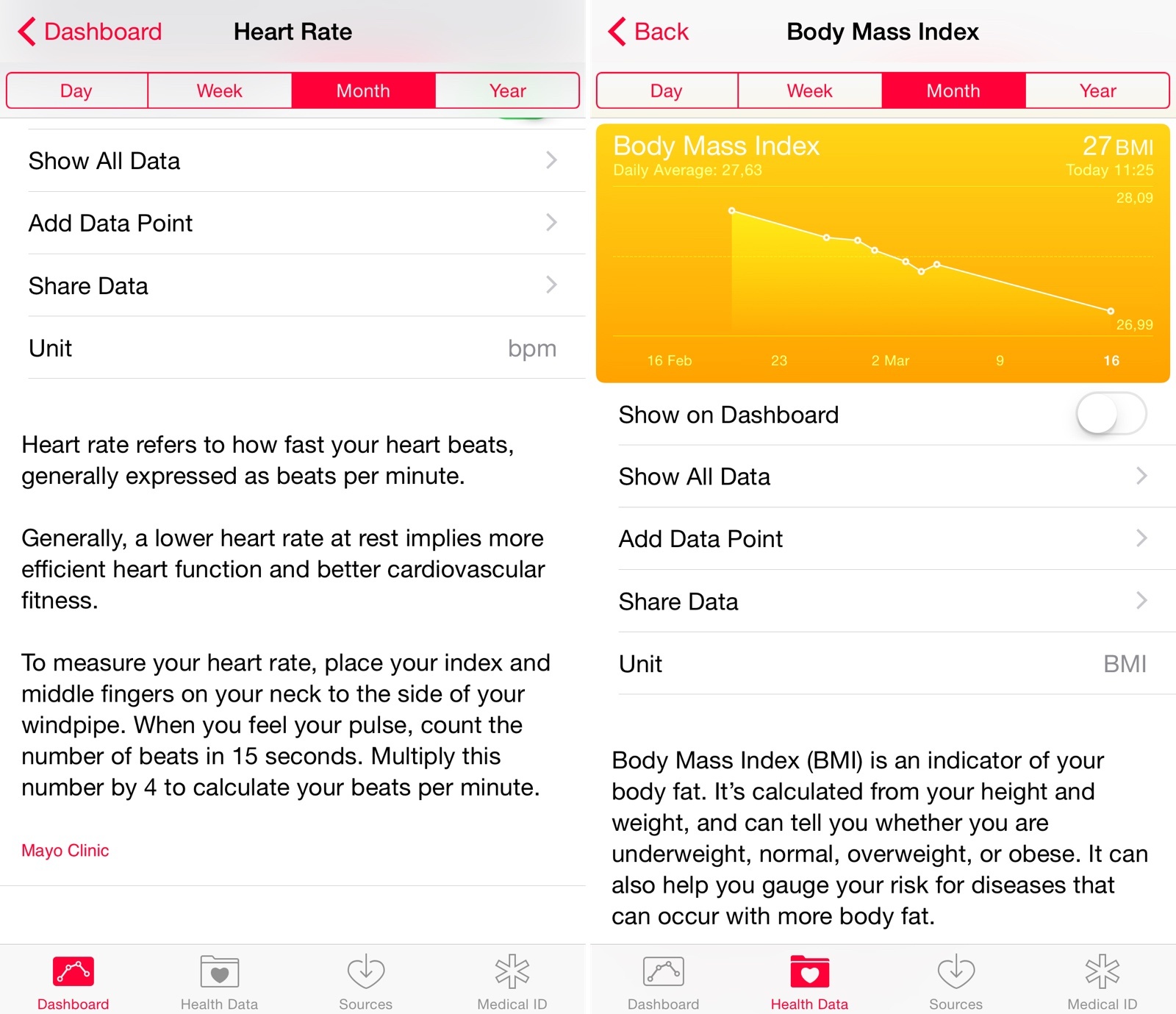 A good change in iOS 8.2 is the addition of descriptions for most of the categories available in Health. Descriptions are informative and concise, and they’re either provided by Apple or organizations like Mayo Clinic (in that case, a link to view more information in Safari is available). My girlfriend and I were looking for an explanation of body fat percentage and BMI (we have a shared Withings Smart Body Analyzer), and instead of having to search Google we simply opened the Health app and learned about how body fat percentage is calculated from there.

I still think that, in the future, Apple should use the Health app to provide suggestions and practical advice to complement data reporting. Right now, Health is a capable (and faster) dashboard for data and graphs, but it’d have a bigger impact if it could also tell me how to optimize my habits and live better. The fitness features of Apple Watch seem like a good start in that direction, and I’m curious to see how Health will evolve this year.

It has recently come to my attention that I may have been tracking my caffeine consumption completely wrong for the past several months. I’ve been tracking my espressos as single shots, whereas I was preparing them with the same quantity of coffee that I’d use for two espresso cups. Essentially, I’ve been drinking double shots for months and I’ve always reported them as single shots.

This poses an interesting scenario for my caffeine consumption habits. Obviously, there’s nothing I can do about past entries in the Health app1, but I can think about my plans going forward. I see two possible options:

My problem is that my espresso machine has two spouts, and when I’m home alone I don’t want to waste coffee that exits through one of them. The result is that I drink a longer and stronger espresso that alters the caffeine intake (and gives me a nice buzz).

The simple solution would be to put less coffee powder in the machine, which would result in a single shot that exits through two spouts. Or, I could limit the number of double shots during the day, but I like the ritual of preparing espresso because it’s also a pleasant break while I’m working. I’ll probably end up using less coffee (like a sane person) as I realize that most people do this. 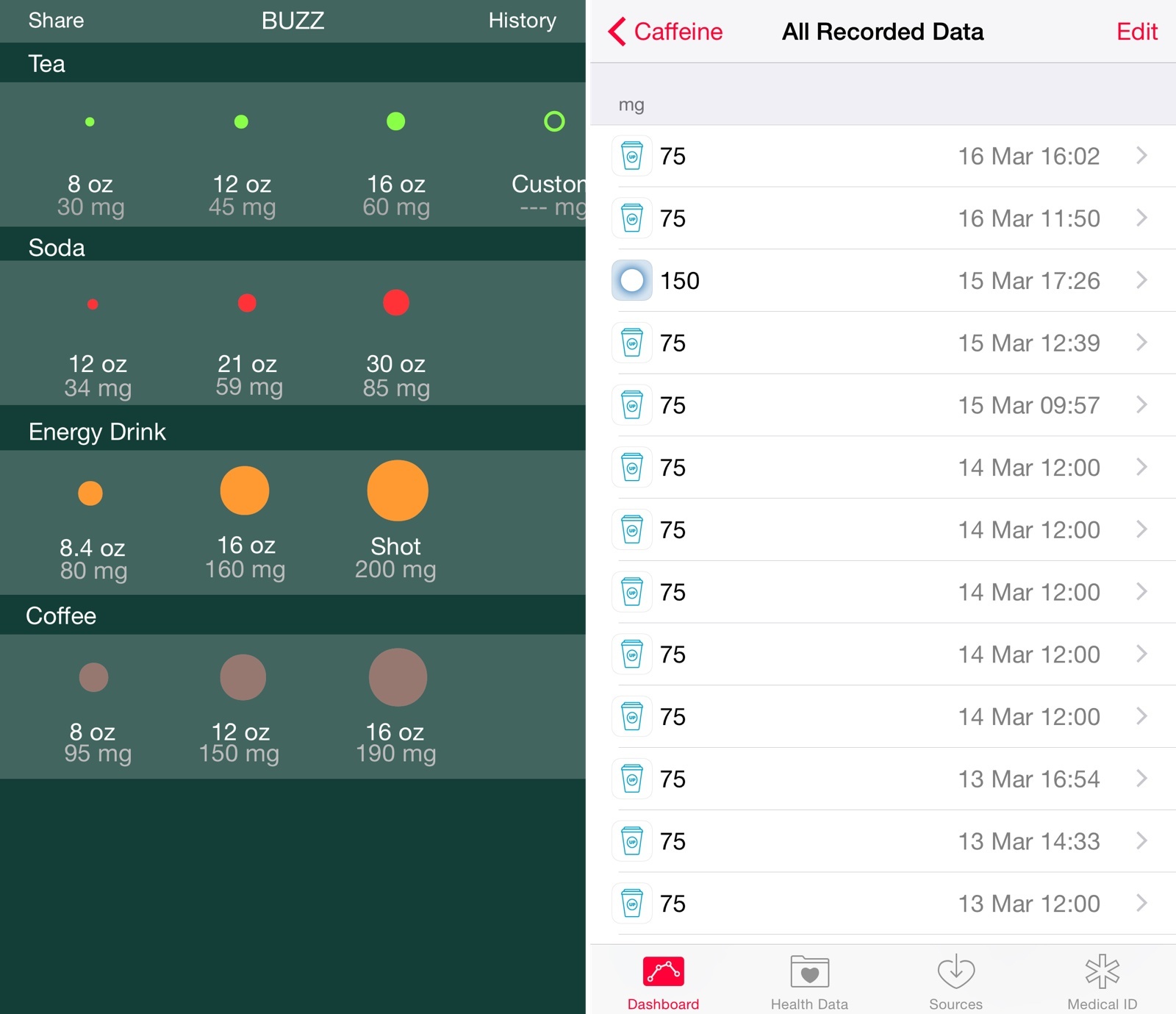 I’ve also been using an app called Buzz to track caffeine in addition to the Jawbone UP Coffee app, and it’s got some pros and cons. Unlike UP Coffee, it’s optimized for the iPhone 6 Plus and adding an entry to the Health app takes one tap. But, custom drinks are limited to tea and you can’t add entries for a specific moment in the past, which UP Coffee allows you to do if you forgot to track coffee. I like the simple interface and interactions of Buzz, and I’ll keep an eye on its updates.

Since my article, the apps I’m using for insights and suggestions have also gotten faster and more personalized. This, I believe, is a result of the changes in iOS 8.2 as well as a consequence of more data available to them.

I noted how Addapp’s insights were “more reminiscent of cool facts from fitness blogs and scientific studies than anything”. I’m happy to see that, over time, Addapp is offering more meaningful suggestions and data correlations fetched from the Health app. 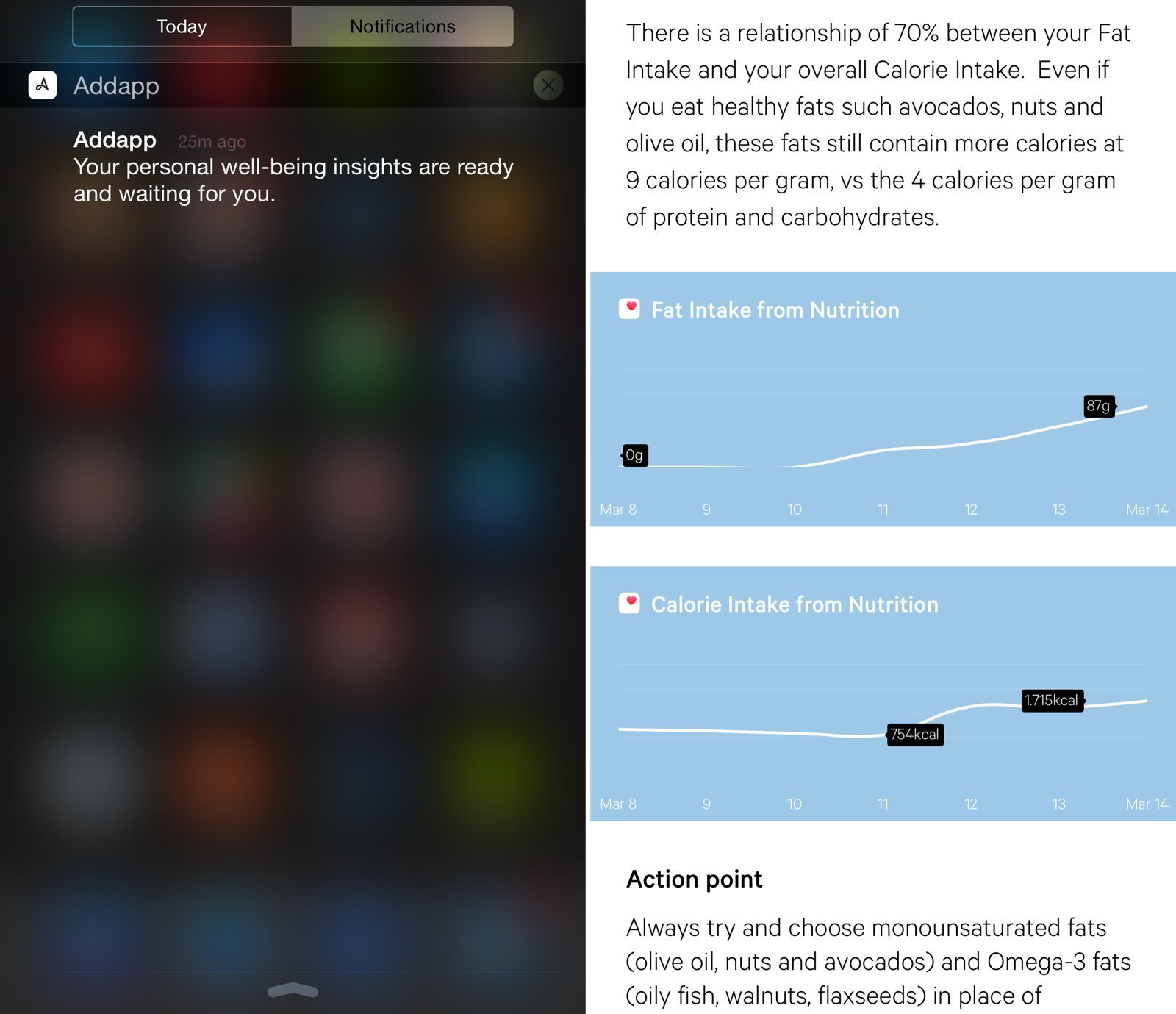 The app has so far told me that I should sleep more to feel more energized (they’re right) and that quality in carbs counts (less processed food is better); Addapp is showing daily summaries of my protein intake (I’m not doing bad there) and, in general, it’s sending me something useful every day. Some of the cards displayed in the app still feel like snippets pulled from online publications, but I’m starting to see how Addapp can get better and personal with time.

Similarly, Lark (a fitness assistant that presents data with a conversational UI) is benefiting from the improvements in iOS 8.2 as it’s not getting stuck trying to read Health data anymore. 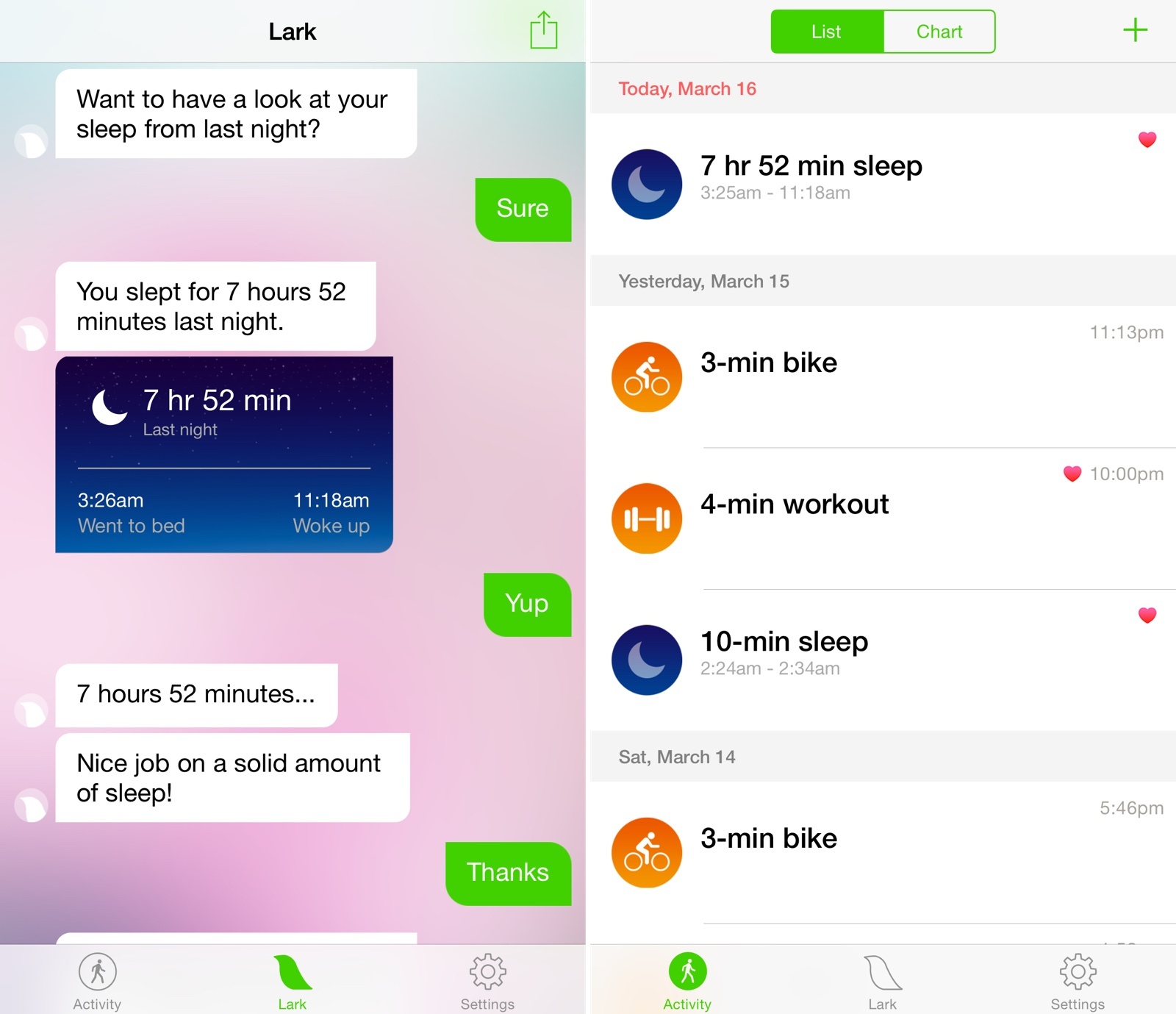 I’m still not sure about the day-to-day convenience of Lark: the app tells me how much I’ve slept (I already see that in Health and Pillow) and it usually suggests I should walk more, which is not exactly earth-shattering advice. However, Lark is also able to congratulate me on high activity on a certain day and it can display trends for a specific day and hour of the week, which can be useful to contextualize what I’m doing and why I may be sitting down too much. I’ve noticed that, since iOS 8.2, Lark is reporting some of my activity as cycling (which I don’t do), and I’m hoping that this will get fixed soon.

Overall, I continue to be happy with my decision to aggregate health and fitness data in Apple’s unified Health dashboard. As more apps integrate with HealthKit and Apple Watch starts reading historical data from Health, I believe that choosing to go all-in with Health will pay off – more than it already has.