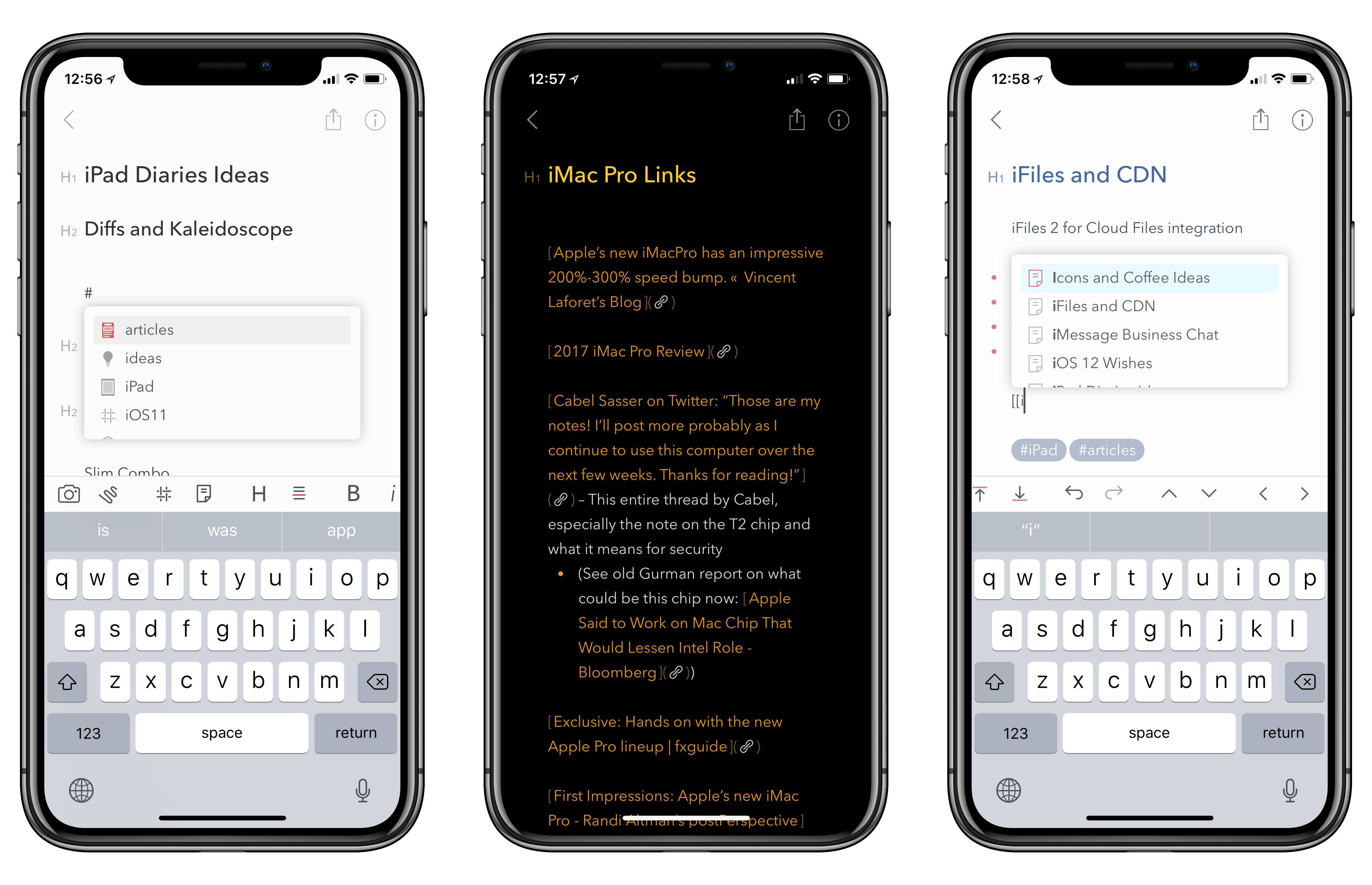 As I noted last month in my iPad Diaries column, I’ve started using Bear in addition to Apple Notes to research articles in Markdown and later convert them to drafts in Ulysses. I was impressed with Shiny Frog’s work on iOS 11 and how they brought advanced drag and drop to Bear, but I’m even more positively surprised by the improvements to tagging they released today as part of Bear’s 1.4 update.

The marquee addition to Bear 1.4 is autocomplete, which is most notable when adding tags to a note. Now, instead of remembering which tags you’ve already added to your notes in Bear, you can start typing a pound sign and the first letter of a tag, and Bear will show you an inline popup with tag suggestions.1 Tap one, and the tag immediately gets added to the note without typing it in full. This not only simplifies how you can organize your notes with tags, but it also ensures you always use consistent tag names as you won’t end up with duplicates (such as #idea and #ideas, which happened to me because I couldn’t remember which one I had originally created).

I’m a fan of the contextual menu to choose tags, which I think works well on both the iPad and iPhone. What’s even better though is that the same menu is now used to autocomplete wiki-style links to cross-reference other notes in Bear. The app has long offered the option to create links to other notes, but, like tags, the feature was inconvenient as it required you to manually type the entire name of a note you wanted to link to.

That annoyance is gone thanks to autocomplete. Now as soon as you type double brackets and the first letter of a note, Bear will show you a list of notes you can embed as links. Tap one, and you’ll create a reference link to the note in the document you’re working on. Alas, Bear still doesn’t include an option to compile linked notes upon exporting the master one (which would be terrific to work on longform articles in the app), but I appreciate the possibility to more easily create TOC-type notes in the app. 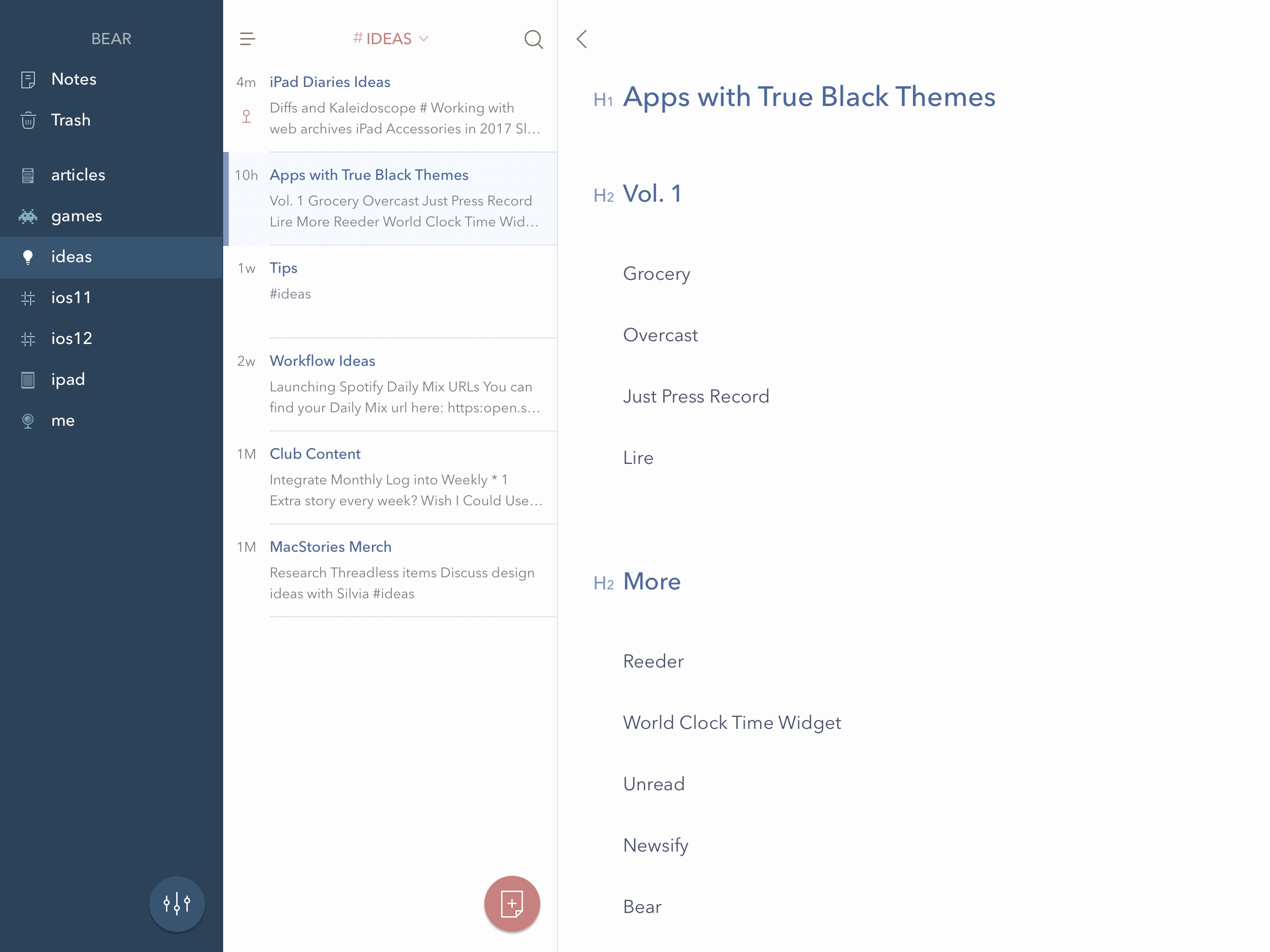 There are other improvements worth mentioning in this update. Bear now automatically assigns custom icons to popular tags: in the app, the articles, games, ideas, and iPad tags I was using before now carry delightful monochrome glyphs that add a touch of personality to the sidebar and also make tags easier to find. I’d be curious to know how many more popular icons are supported. You can disable this option in the Bear’s theme settings by turning off ‘Custom icons for tags’.

Speaking of themes, Shiny Frog has added three new themes for Pro subscribers: Duotone Light, Duotone Snow, and Dieci. The latter (which means “ten” in Italian) is a true black theme that looks fantastic on the iPhone X’s OLED display as it seamlessly blends with the bezels of the device.

In addition, Bear for Apple Watch now lets you scribble on notes by force pressing them, and you can also append todos to an existing note directly from your wrist. My favorite small tweak, however, is about using custom keyboards with Bear: the app now remembers custom keyboards you use for each note. For instance, the app will automatically show Gboard if you last used it in a note, but default to Apple’s system keyboard, or a different custom one, elsewhere.

Bear’s subscription model seems to be working well for Shiny Frog: the indie studio is releasing substantial updates to Bear at a regular pace, iterating upon their original vision of a Markdown-flavored note-taking app that combines elegance with power-user features. Version 1.4 is another remarkable update for what is, arguably, the best alternative to Apple Notes on iOS. If you’ve never played around with Bear, now would be a great time to check it out.

Bear 1.4 is available on the App Store.