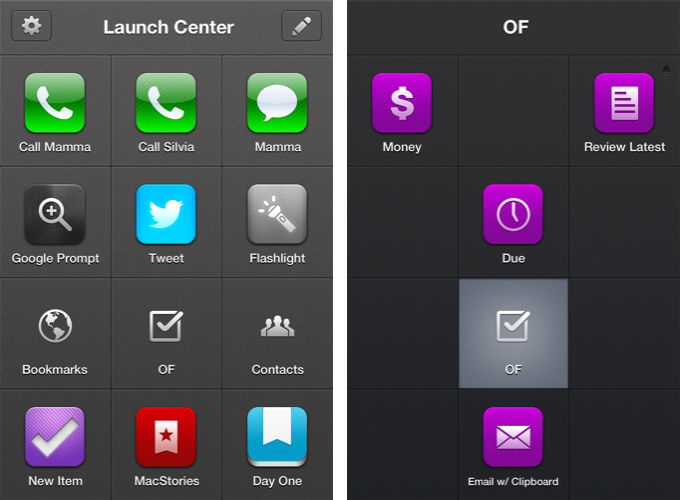 Michael Schechter has created a series of Launch Center Pro templates to speed up the creation process of repetitive tasks in OmniFocus for iPhone, inspired by David Sparks’ snippets for TextExpander and OmniFocus for Mac. With actions to easily attach the contents of the clipboard to a new task or setting up a reminder to follow up on something with a colleague, Michael’s snippets can be huge timesavers if you’ve been looking for a way to automate certain aspects of OmniFocus on the iPhone.

All I’ve done here is create a new group in Launch Center Pro called OF Actions. This allows me to have 11 rapid-fire actions for my most commonly created tasks. Rather than 11 unique actions, I’ve actually created duplicates for most that include whatever I have on the clipboard. This way I have a version that duplicates the Quick Entry field and another that emulates some aspects of the Clipper.

Based on OmniFocus’ new URL scheme and Launch Center Pro’s support for prompts (more details in our review of the app), these snippets won’t offer the same degree of customization found in desktop solutions like the aforementioned TextExpander or Keyboard Maestro, but they surely are the best way to automate OmniFocus on the iPhone for now. Because of the nature of iOS, you won’t be able to set up scripts that, for instance, let OmniFocus communicate with other apps automatically, but at least you’ll be saving some typing and navigation inside the app.

Inspired by Michael’s work, I have set up actions to access my most used perspectives and a new one called “Review Latest” that makes up for the lack of an Inbox perspective on iOS (as it’s project based rather than context based) and displays the latest tasks I may have added without a context or due date using Captio. Furthermore, I have assigned a scheduled reminder to the action, so that every day after dinner I’ll be reminded by Launch Center Pro to process my newest tasks created throughout the day.

The Omni Group’s Ken Case also chimed in on Twitter explaining how OmniFocus URLs work, and Justin Lancy collected the tweets in a Storify bundle. Nick Winja took a look at how it’s possible to access contexts via URL, as well.

You can see the full text for Michael’s Launch Center Pro snippets here.