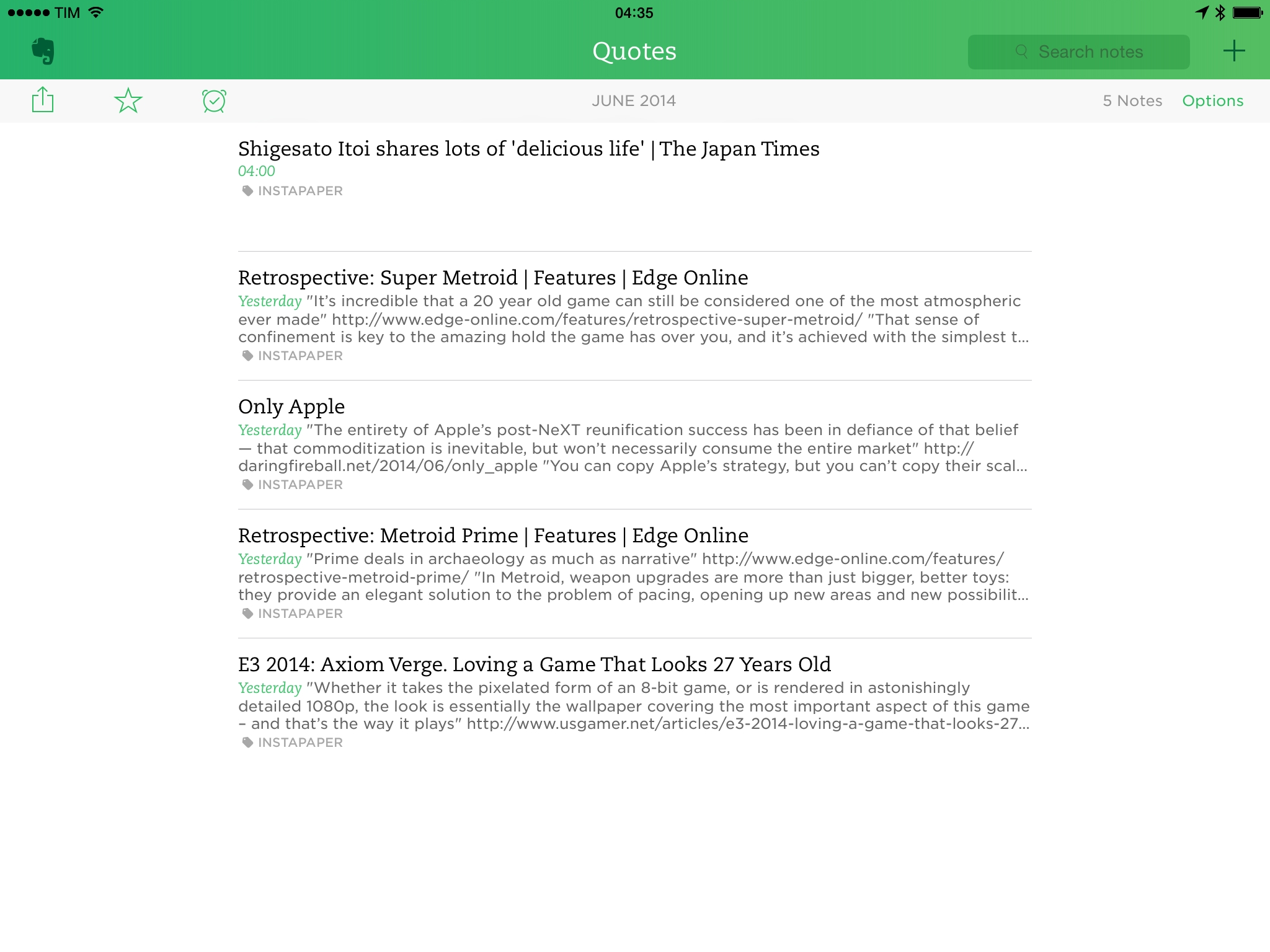 Earlier this week, web automation service IFTTT launched a new Instapaper channel that, unlike the old one, contains a variety of triggers to send items from Instapaper to other channels.

After my recent return to Instapaper (which I’ll write about…someday), I already had a Launch Center Pro action that used IFTTT to save articles to read later, but the new triggers intrigued me, so I decided to try out a couple of additional recipes.

This recipe is the same as the old one, except it runs on the new Instapaper channel. Whenever I want to save an article to Instapaper, I copy it to the clipboard of my iOS device, open Launch Center Pro, tap the Instapaper icon, and off it goes to IFTTT. It’s simple and it gets the job done.

I thought it’d be fun to visualize my Instapaper archival patterns over time – that is, the date and time of each article I’ve read and archived. And I also thought that the best way to future-proof that intention would be to save dates and times in a spreadsheet, like an adult. Therefore, I created a Google Drive recipe. Right now, I don’t know how I’ll visualize my reading patterns, but the recipe works fine and I’ll figure out a way to plot dates against URLs in a chart. Maybe I’ll export the spreadsheet to CSV and use Pythonista with matplotlib to visualize days, times of the day, and frequency of domains. Maybe I’ll just create a chart in Numbers. We’ll see.

This is the recipe I was looking forward to. Since Instapaper launched the great new Highlights feature, I’ve been trying to find a way to properly organize those highlights in Evernote. This recipe does (almost) exactly what I need: it appends highlights from the same article to a single Evernote note in a specific notebook. I use Instapaper Highlights to save quotes and passages I like. And while Instapaper does have a native Evernote integration, the problem is that it generates multiple notes for individual highlights, which I don’t like. Instapaper likely wanted the lowest common denominator for Evernote sharing, and I believe that’s fine for most people, but I’m a little peculiar about my notes (a trait that isn’t really appreciated in the real world).

In IFTTT, I chose to run an Append to Evernote action every time I have a new highlight. In this way, the first time the recipe runs it will try to append the highlight as plain text to a note for the article I’m reading, but because there won’t be an existing note for that article, it will create a new one. However, as I keep reading the same article and I keep highlighting bits of text, IFTTT will find an existing note, and this time text will be appended, so I won’t end up with multiple notes for multiple highlights.

My minor annoyance with the Append to Evernote action on IFTTT is that it can’t add the Instapaper article’s URL to the note’s metadata. This means that the metadata popover in Evernote won’t display the source URL for a note that contains highlights, which is the reason why I’m currently embedding URLs at the bottom of each highlight. It doesn’t look nice, but it works.