Saturday, Apple suspended social media app Parler from the App Store. The move followed Google’s removal of the Android version of the app from the Play Store on Friday and happened at roughly the same time that Amazon announced that it was ending Parler’s access to its cloud services.

On Friday, Google removed the service’s app from the Play Store, telling CNN that:

“We’re aware of continued posting in the Parler app that seeks to incite ongoing violence in the US. We recognize that there can be reasonable debate about content policies and that it can be difficult for apps to immediately remove all violative content, but for us to distribute an app through Google Play, we do require that apps implement robust moderation for egregious content. In light of this ongoing and urgent public safety threat, we are suspending the app’s listings from the Play Store until it addresses these issues.”

That same day, BuzzFeed News reported that Apple had given Parler 24-hours to improve its moderation of content posted to the service, or it would be suspended. Although there were reports that Parler removed some content, it wasn’t enough for Apple. On Saturday, in a statement to TechCrunch and other media outlets, the company said:

We have always supported diverse points of view being represented on the App Store, but there is no place on our platform for threats of violence and illegal activity. Parler has not taken adequate measures to address the proliferation of these threats to people’s safety. We have suspended Parler from the App Store until they resolve these issues.

Around the same time, Amazon announced that it would bar Parler from using its cloud services, which host Parler’s content, beginning Monday at midnight and dealing another serious blow to its future.

We are deeply saddened by the horrific events that occurred in Washington, DC last week. As a site that covers apps, we applaud Apple, Google, and Amazon for taking action to eliminate threats of violence and illegal activity from their platforms. Apps have been a force for good in the world in so many ways, but like any tool, they can be used for evil too. There should never be a place on the App Store or any other app platform for threats of violence or illegal activity. 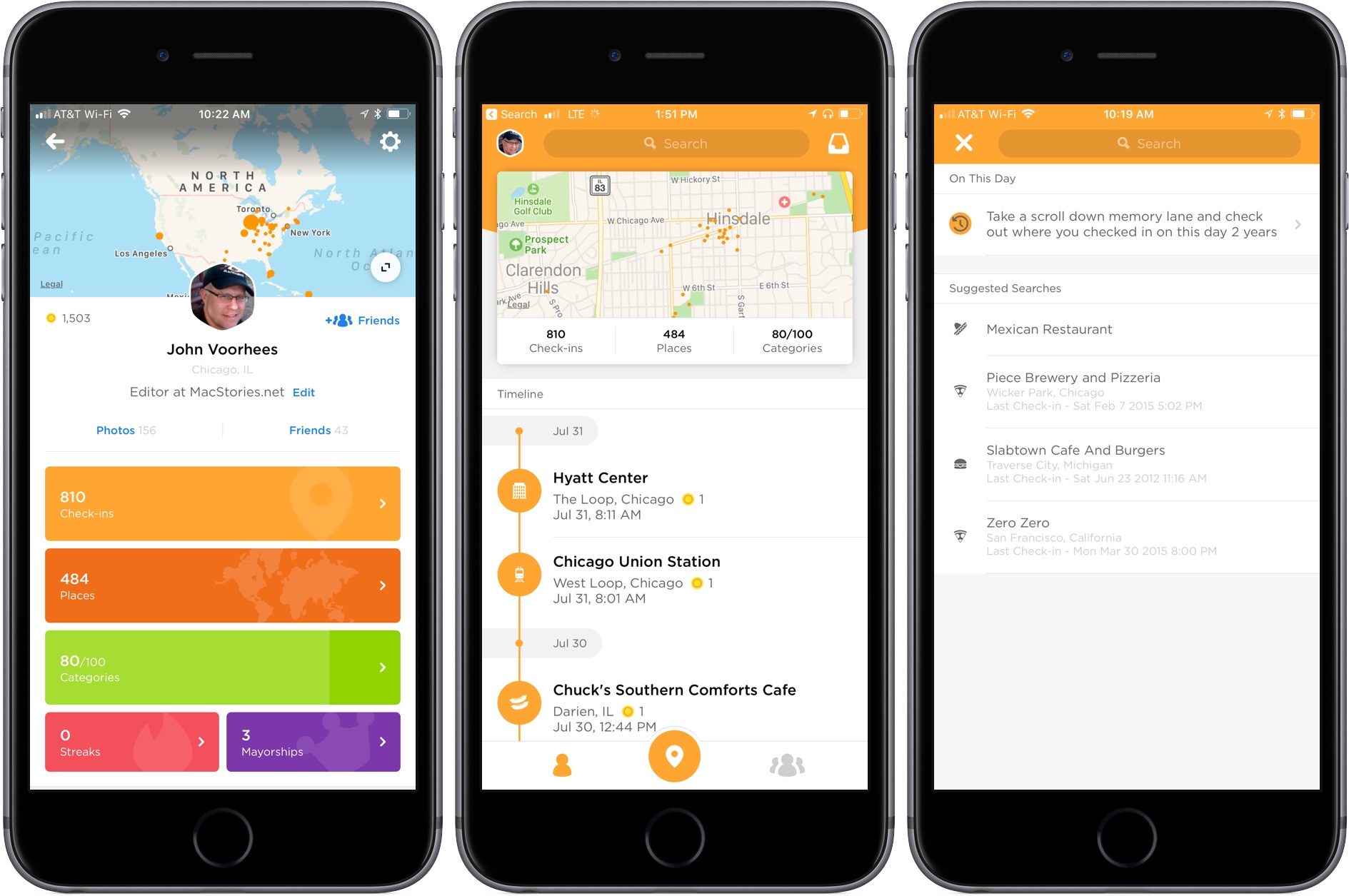 Swarm received an update this week that takes the app in a new direction. The latest version of the app deemphasizes location sharing with friends, mayorships, and sticker and coin collecting. Those elements are still there, mostly tucked away behind the ‘Friends’ tab, but the focus has shifted. Now, the app centers around the creation of a personal timeline as a sort of journal of places you’ve visited.

END_OF_DOCUMENT_TOKEN_TO_BE_REPLACED

Apple launched an official Instagram account today, @apple. Rather than opting to promote general company news, the primary focus of the account appears to be functioning as an extension of Apple’s long-running ‘Shot on iPhone’ ad campaign.

Nearly all of the initial posts from the account are galleries featuring various photos and videos shot using iPhones. Each post’s caption reads ‘#ShotoniPhone by…’ followed by a list of the names and accounts of those who created the content, and a quote from those content creators about their work. The bio line of the account reads, “Tag #ShotoniPhone to take part.” Presumably using that tag may lead Apple to contact you about including your work in one of their upcoming collections.

While the focus of the account may change in the future, Apple’s current strategy of tying together its photography marketing campaign with the real work of photographers on Instagram is an effective, thoughtful use of the platform. By connecting with content creators and highlighting their work, Apple is not only fostering an environment of social connection among both amateur and professional photographers, but it’s also promoting the iPhone’s strengths as a camera.

Today, Manton Reece launched a Kickstarter campaign to raise money for Micro.blog, a platform for independent microblogging and a related book on the subject. Micro.blog has a lot in common with social networks like Twitter, such as replies and favorites, but with an important difference. Instead of locking users into a proprietary system owned by someone else, the content created by individuals is owned and controlled by them. As part of the Micro.blog service, Reece is also building publishing tools with Markdown support, including a native iPhone app, to help people get started with microblogging.

At the core of Micro.blog is an critical design decision – the separation of publishing from social networks. That choice ensures that the microblog content you create remains yours to publish at [your-name].micro.blog or anywhere else you can host a website. At the same time, Micro.blog doesn’t ignore existing social networks. Microblog posts can be cross-posted to other services, which has the potential to give users the best of both worlds – control over their content and access to the broad audiences of services like Twitter.

New social networks have come and gone over the years, but Reece’s focus on decentralizing microblog publishing from social networks is unique. I had a chance to speak with Manton about Micro.blog at WWDC and know how much time and thought has gone into this project. The campaign is off to a great start and I’m excited to try it soon. 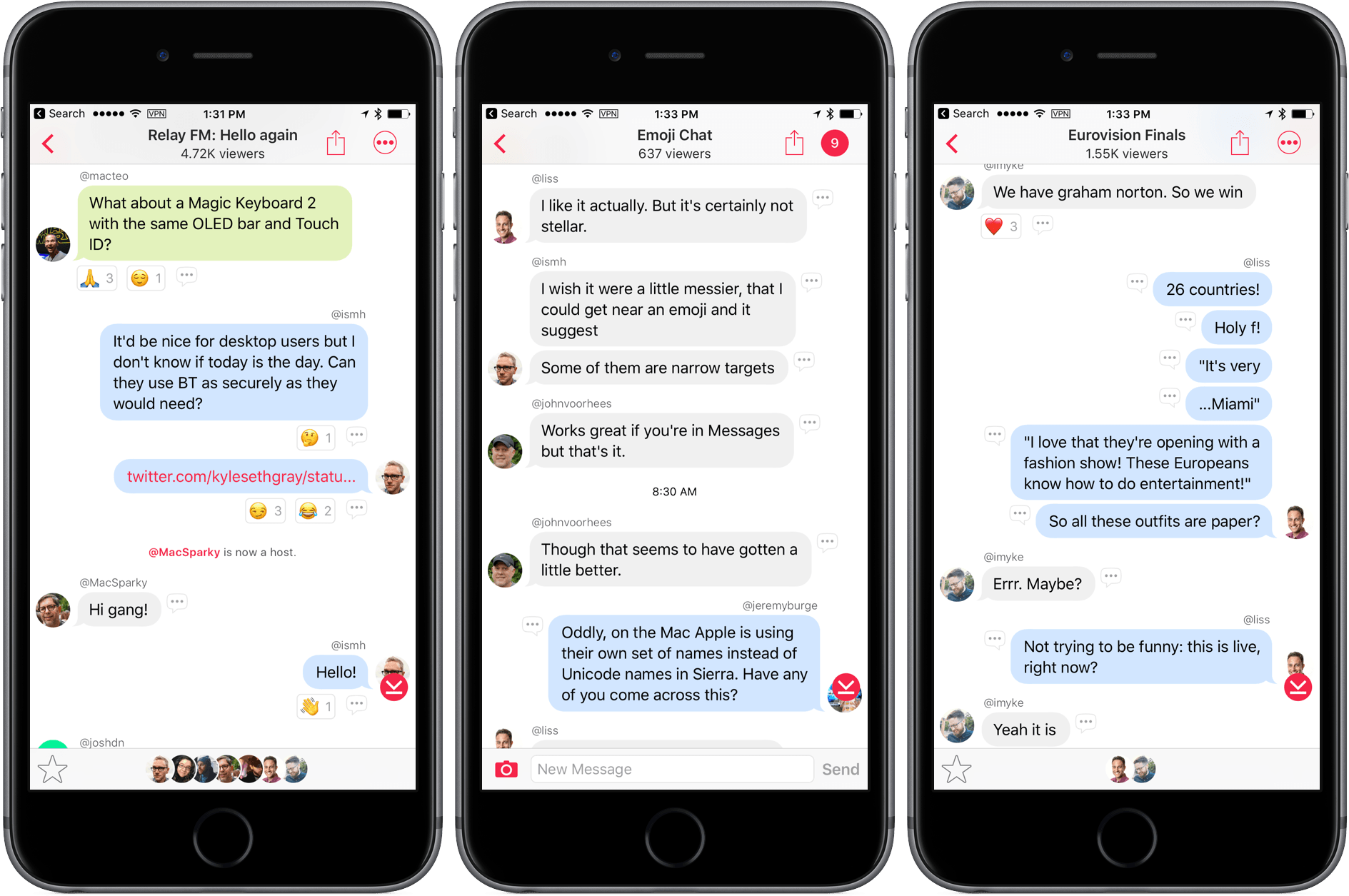 Talkshow, which launched about six months ago, will be shutting down effective December 1st. The service allowed groups to have text-based conversations in public. It quickly became a place to assemble panels to comment on live events or just discuss a particular topic. The discussion was limited to the host and guests, but people observing the Talkshow chat could submit questions.

In an email to users and post on Medium, Talkshow says:

While we have enjoyed the conversations that have happened on Talkshow, and are grateful for the community that has formed around the product, we don’t see it getting big enough to have the impact we had hoped for.

Talkshow’s shutdown is happening in stages over the next month. Talkshow is being removed from the App Store today. On November 8th, active Talkshows will end and tools will be made available to export existing shows. Finally, on December 1, the service will be turned off, which means the app will no longer show existing, inactive Talkshows, even in browsing mode. 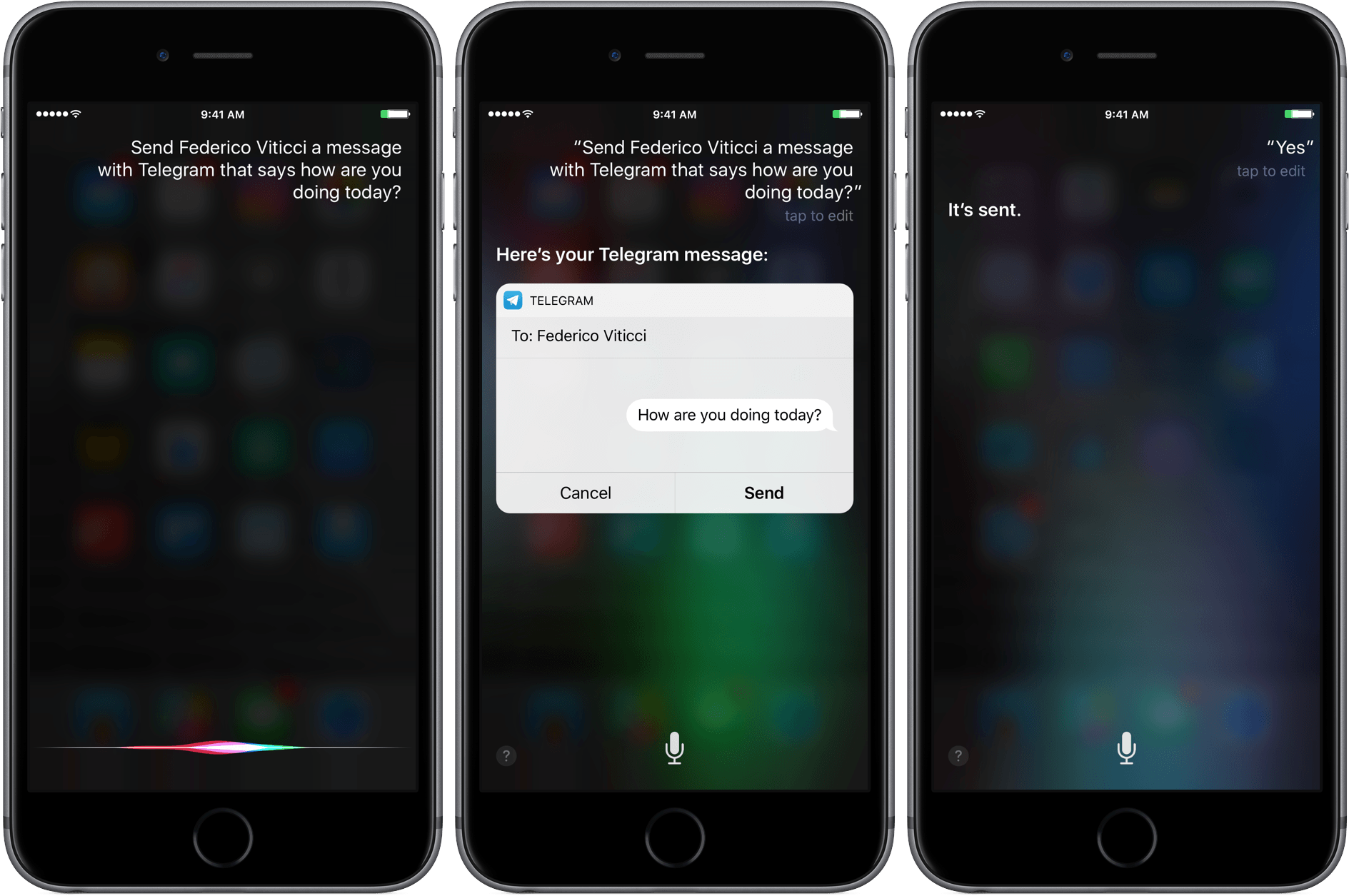 Telegram received a significant update today that adds SiriKit support for sending messages and upgrades its bot platform. Both features will help keep Telegram closer in line with the features available in Apple’s own Messages app.

By integrating with Siri, messages can be sent with Telegram using commands like ‘Send Federico a Telegram message that says what’s the weather like in Rome today?’ Similar to Messages, Siri interprets your instructions and presents you with a draft message before sending it. In my tests, the feature worked to send messages to individuals, but I couldn’t send a message to The MacStories Lounge channel, which broadcasts messages to everyone who subscribes to that channel. 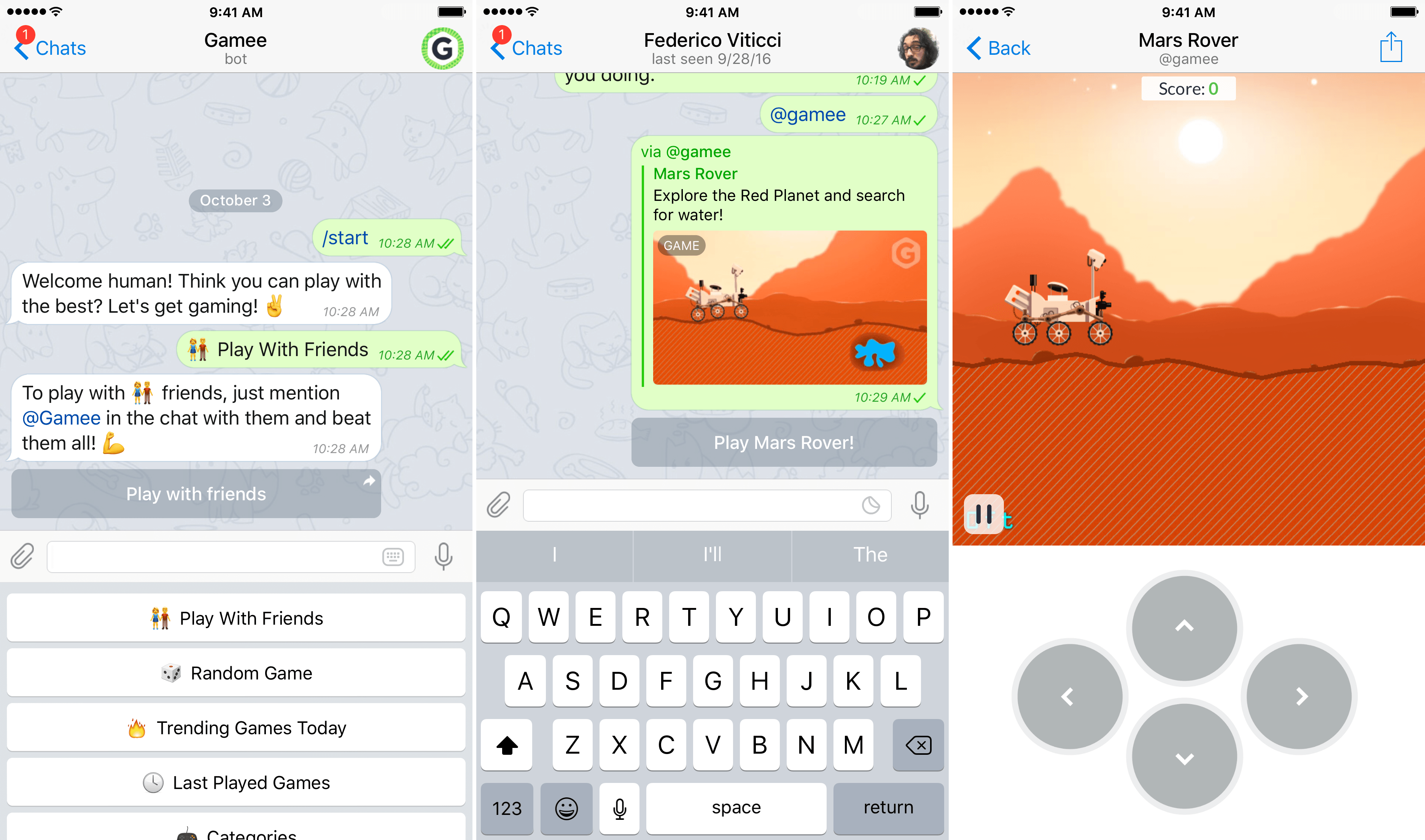 Starting a game in Telegram with a bot.

Telegram also updated its bot platform to support games made using HTML5. The iOS release notes for Telegram also suggest that the changes to bots could be used for other rich media experiences, but for now, Telegram has chosen to focus on games. According to Telegram’s blog:

The best part of the Telegram Gaming Platform is the competition across all your existing chats. We save high scores for every game played in every chat, and you can instantly check out how you and your friends are doing against each other. Every time there’s a new leader in the game, other playing members of the chat are notified that they need to step it up.

I took a quick look at a few of the thirty games available at launch from Gamee and they were fairly basic games, but it’s a good start, and it will be interesting to see what developers do with the new APIs. 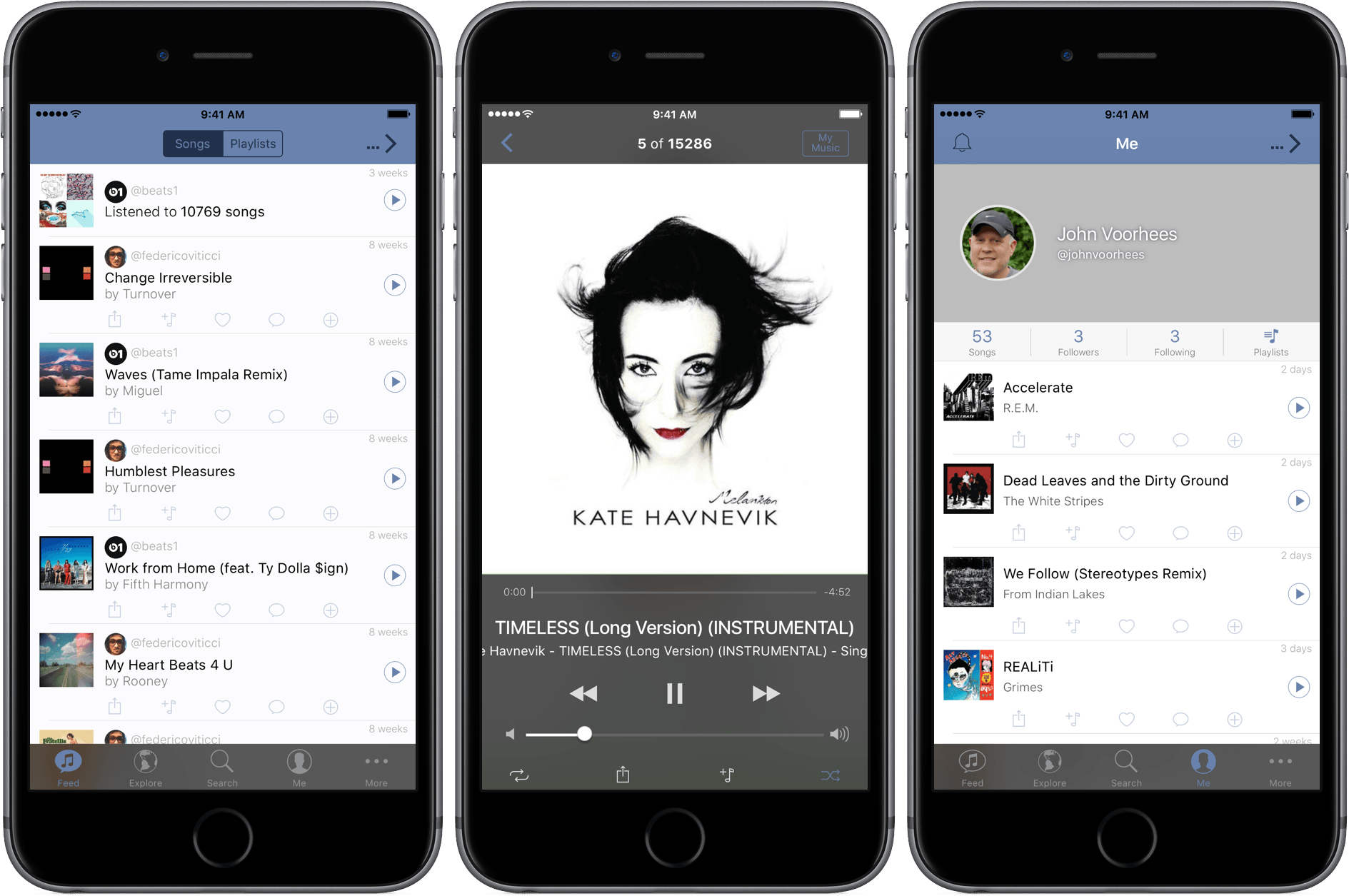 Today, Mateus Abras launched SoundShare 2.7, a social network for music lovers. SoundShare is an iPhone-only app designed to break down the walls between competing streaming services so that it’s easier to share music with your friends. Integration with Apple Music, Spotify, and Deezer allows music sharing with others and collaboration on playlists regardless of which service your friends use.

The social aspect works on the familiar follower/following model. When you play songs in SoundShare by giving it access to your streaming service, they are added to your SoundShare music stream after thirty seconds. If you prefer to listen to your music through a different app, you can add songs to your stream, or a SoundShare playlist, with SoundShare’s extension. Your followers can then listen to the songs in your stream using whichever service they prefer, add your songs to their streaming service, incorporate songs into SoundShare playlists, post comments, send SoundShare links, and like songs in your stream. The only limitation is that the songs shared must be the libraries of both services for you and your friends to enjoy them.

SoundShare shows a lot of promise. The music streaming market is fragmented and there is little incentive for service providers to build tools to share music across platforms. As a result, third-party developers have begun to step into the void.

I recently reviewed SongShift, a simple utility for transferring music from Spotify to Apple Music and back again. SoundShare aims to take third-party integration of streaming services in an entirely different direction by building a social network on top of streaming services. Social networks are notoriously hard to grow to a size where they reach critical mass and I have some doubts about the extent of the demand for music sharing beyond what is already achievable with existing social networks, but it will be interesting to watch SoundShare try with what in my limited testing is a well-considered, solid app.

SoundShare is a free iPhone-only download from the App Store.

Apple today created an official Twitter support account to provide customers with tips, tricks, and tutorials about the company’s product and services. One of the account’s first tweets provides users with step-by-step instructions on how to turn lists into checklists in the stock Notes app on iPhone.

Apple’s presence on social media is slowly but surely expanding. This is now the second support account that Apple runs on Twitter, following last October’s launch of @AppleMusicHelp which provides help and tips relating to Apple Music.