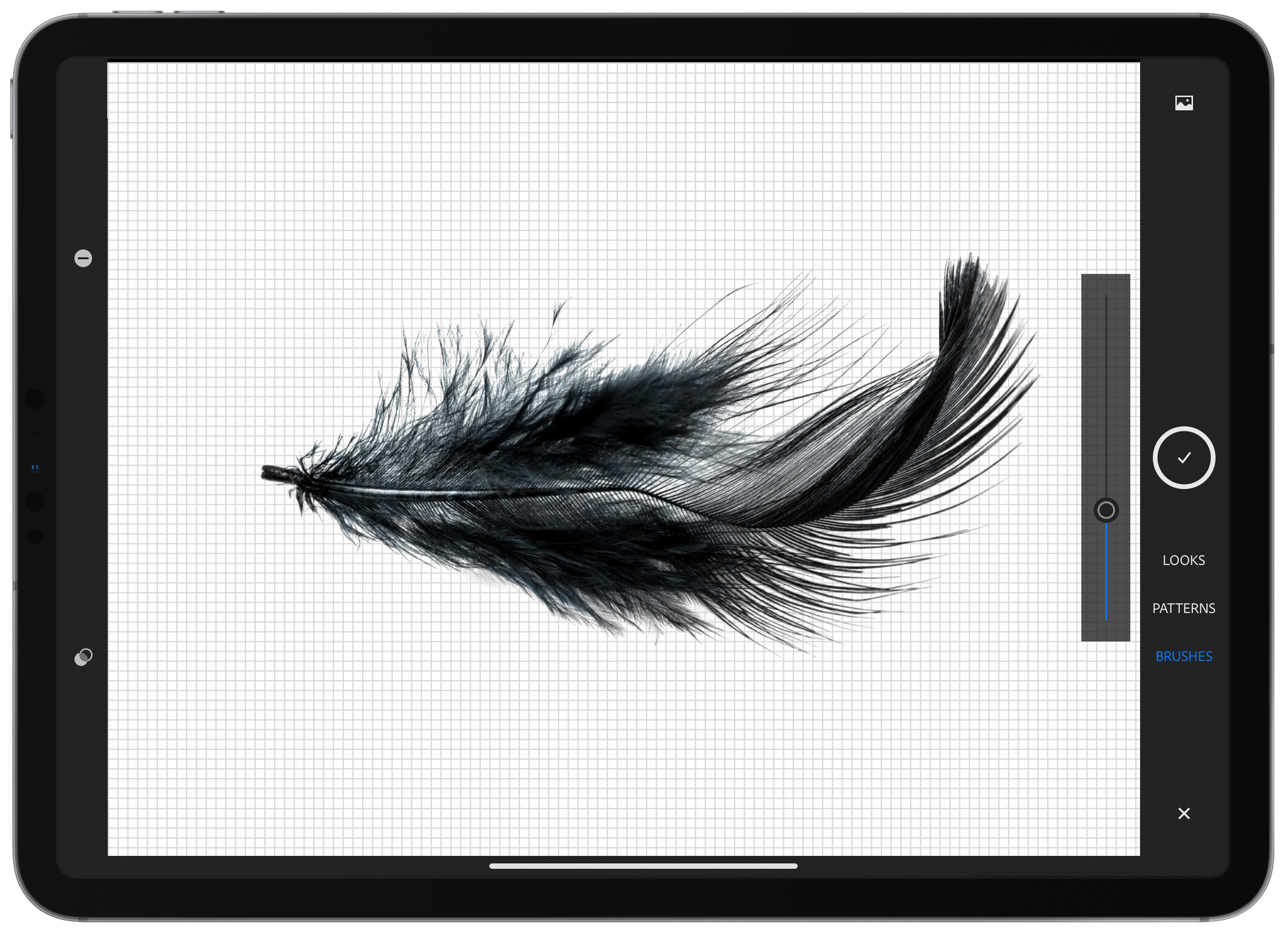 Adobe continues to release M1-native versions of its Creative Cloud apps, announcing today that native Apple silicon versions of Illustrator, InDesign, and Lightroom Classic are all available now. The company also revealed several features coming to its other desktop and mobile apps and published a benchmark analysis that it commissioned from Andreas Pfeiffer of Pfeiffer Consulting, showing that, on average, Creative Cloud apps run 80% faster on M1 Macs compared to comparable Intel systems.

END_OF_DOCUMENT_TOKEN_TO_BE_REPLACED 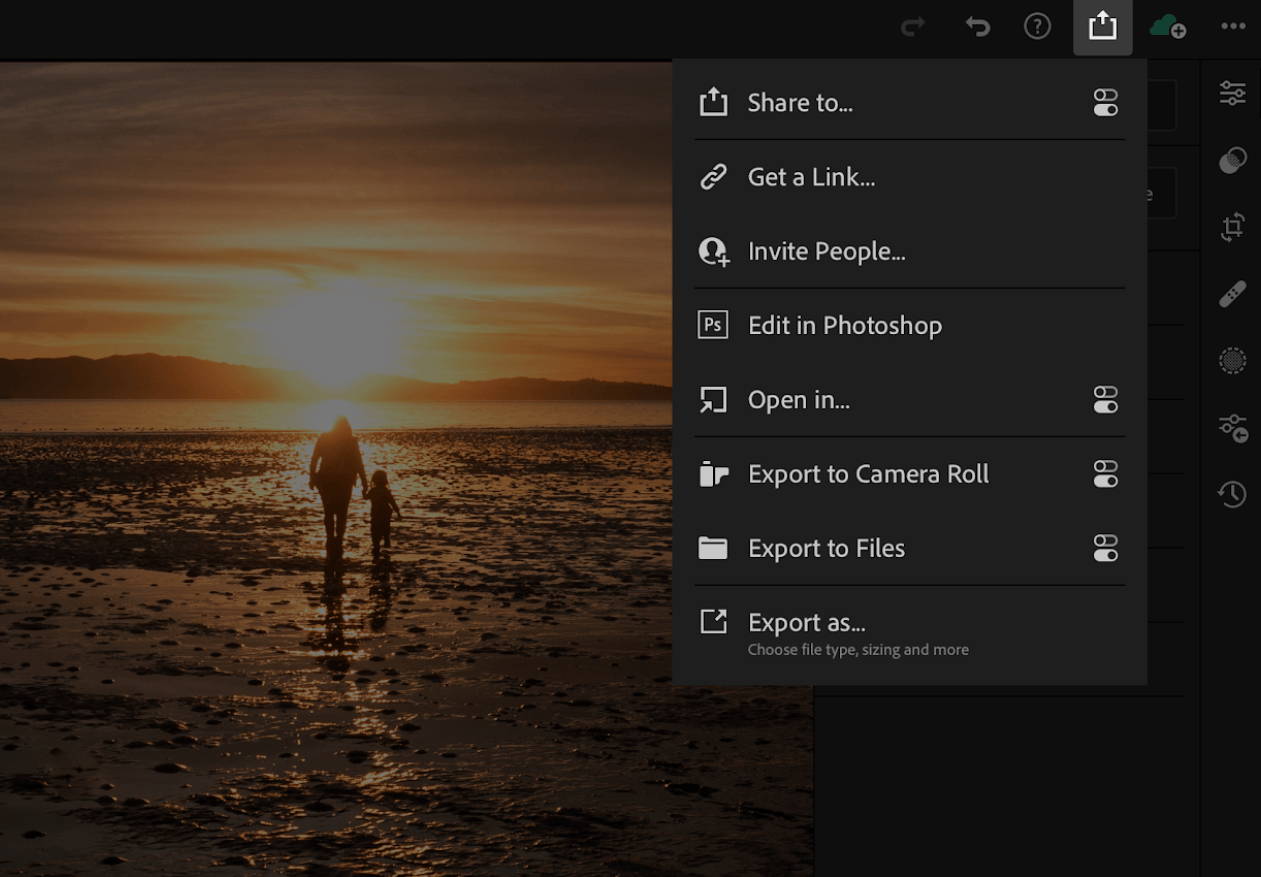 Adobe’s Lightroom and Photoshop are complementary tools that a lot of creative professionals use together on the desktop, moving images back and forth. Until now, however, that wasn’t possible on the iPad, which has made it a frequently-requested feature ever since Photoshop debuted on the iPad late last year.

With today’s update to Lightroom, there’s a new option in the share menu called ‘Edit in Photoshop.’ When you select that option, Lightroom converts your image for Photoshop and uploads it to Adobe’s cloud service. As soon as that process is complete, Lightroom automatically launches Photoshop and loads the image. When you’re finished making edits, tap the big, blue button at the top of the screen that says ‘Send to Lightroom,’ and a PSD version of the image is returned to Lightroom where you’ll also find the original image you sent to Photoshop. Alternatively, you can save the PSD file as a cloud-based document without sending it back to Lightroom.

Sending a RAW image to Photoshop, which is first converted to a cloud-based PSD file.

Finalizing the import into Photoshop, which now includes a big blue button for sending the image back to Lightroom.

Adobe debuted several other updates to Lightroom on the iPhone, iPad, and Mac too. The company is expanding the learning experiences available in the app with more guided tutorials and interactive edits that demonstrate the steps needed to achieve certain results. Lightroom also includes a new versioning system that permits users to experiment by applying different edits to the same image as different versions and compare them without creating multiple files. All users can also add watermarks to images now, which are synced across devices.

Users who upgrade to Lightroom’s premium service get several other features as well. Hues can be adjusted locally, allowing users to change hues in one area of an image without affecting other parts of it. Premium users can also share edits in the app’s Discover section, a community for sharing images, drawing inspiration, and learning.

With every major update of Adobe’s flagship apps on the iPad, I’m impressed by the progress that has been made. Lightroom is a terrific photo editor that’s made all the more powerful by the additional option of exporting images into Photoshop for iPad, which has been advancing itself quickly. Adobe announced updates to many of its desktop apps today too, but what’s striking about the announcements is just how quickly its mobile apps have begun playing a central role in Adobe’s pro product lineup.

Lightroom and Photoshop are available as free downloads on the App Store, with certain features requiring an In-App Purchase. 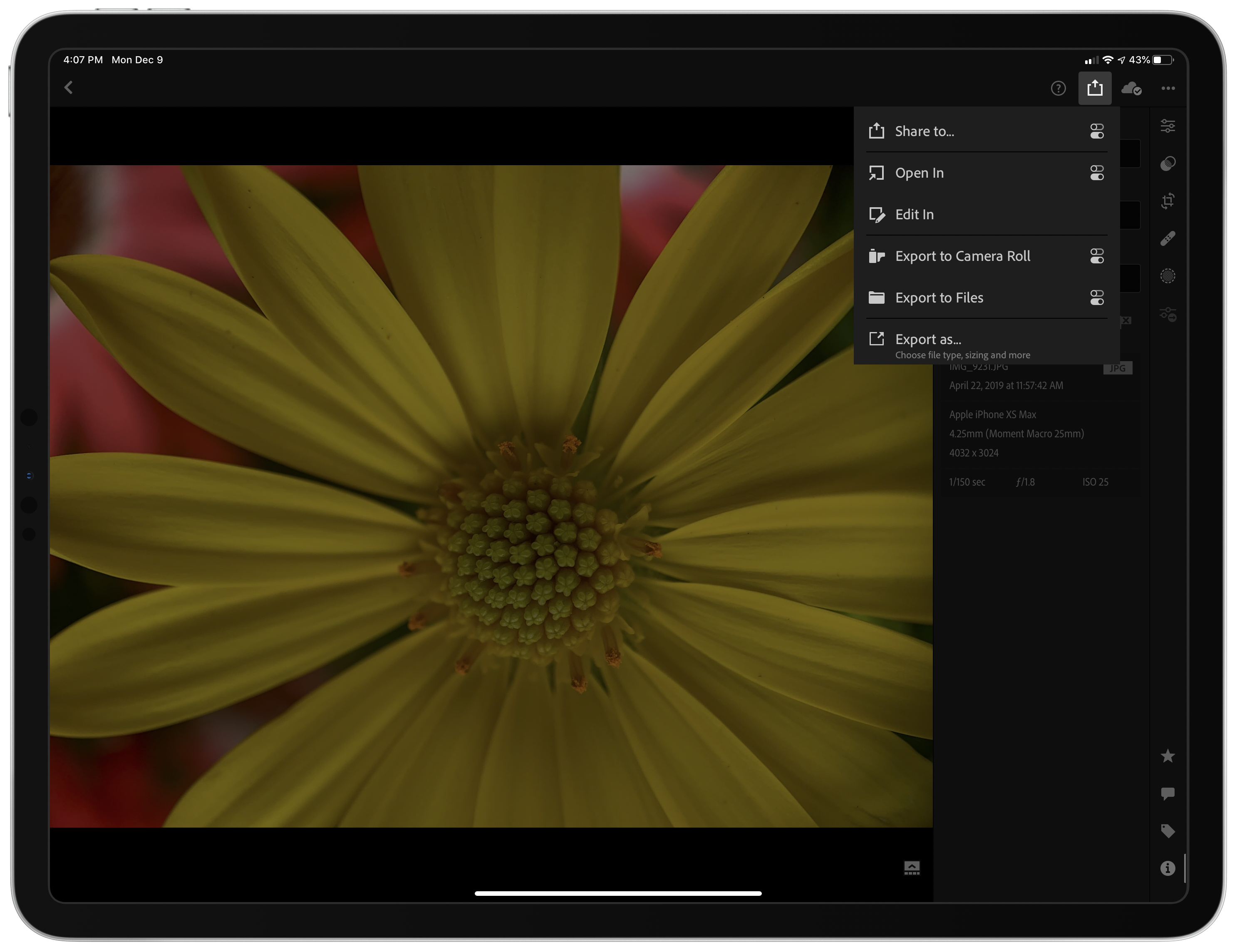 As promised this fall, Adobe has updated Lightroom for iPad and Lightroom Photo Editor for the iPhone with the ability to import image files from SD cards directly inside the app. The company has added new options when exporting your photos too. I’ve been using the beta of Lightroom 5.1 for the past couple of weeks, and the update has worked exceptionally well, reducing the friction of getting images into the app and adding flexibility to getting them back out again.

END_OF_DOCUMENT_TOKEN_TO_BE_REPLACED 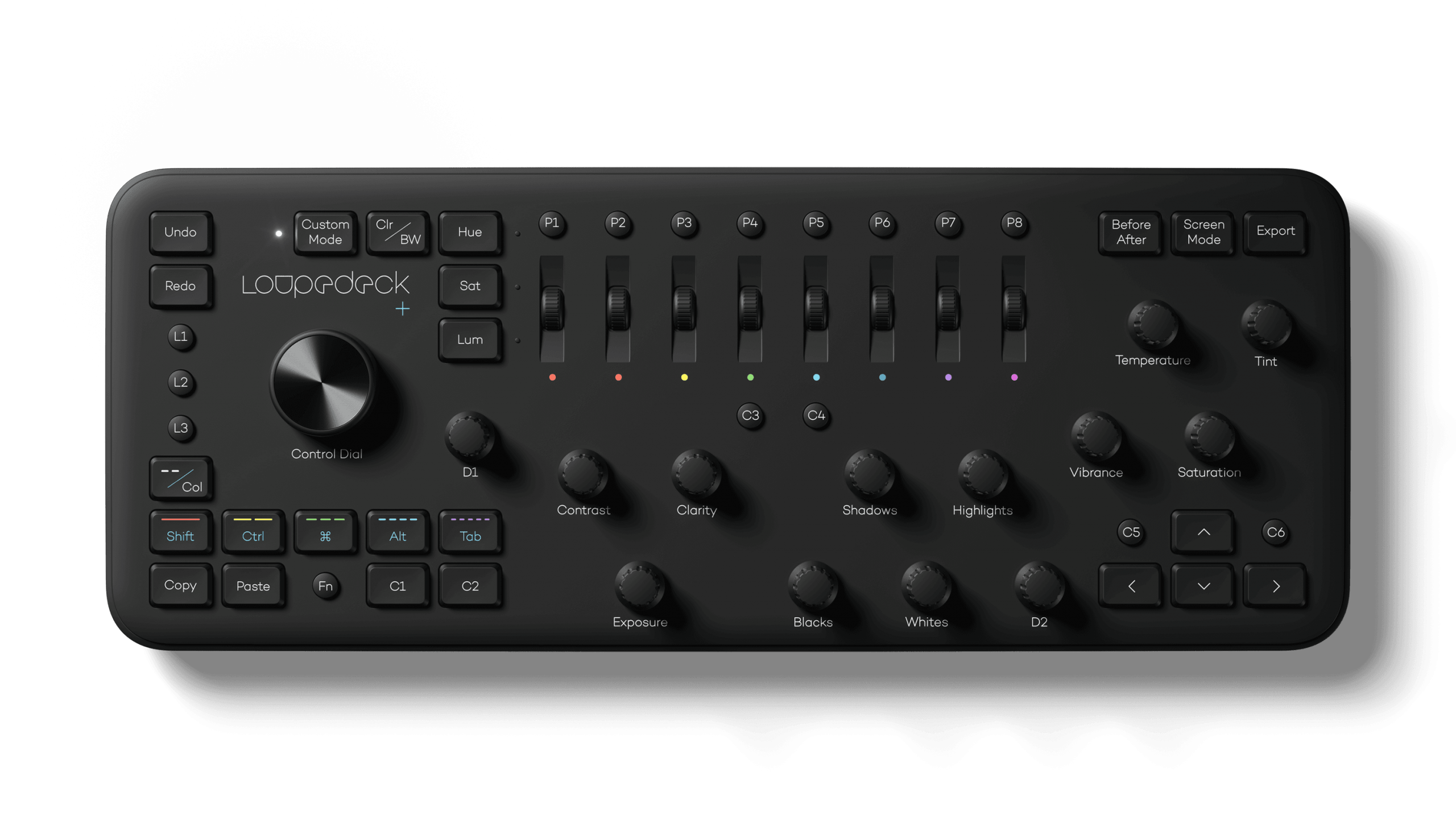 The Loupedeck+ is a hardware control panel for editing photos and video that transforms the software tools you’re accustomed to using with a mouse or trackpad into physical buttons, knobs, and dials. By eliminating the need to dive into menus and hunt for software, the Loupedeck+ changes the image editing process into something much closer to the feeling of editing on an iPad with the Apple Pencil. The seemingly endless series of swipes, drags, and clicks are replaced by something far more tactile and natural.

The result is a clear example of the benefit of using a dedicated tool for a particular task. Photo and video editing is often a high-volume, high-precision activity with lots of repetition, and depending on your job, tight deadlines. That makes any tool that can shave a little time off of editing each photo a win for professionals who often edit thousands of images in a week.

What I didn’t expect, though, is that the Loupedeck+ also makes editing more accessible for beginners like myself. As I’ll explain in more detail below, when Loupedeck sent me their device to test, I spent most of my time using it in Adobe Lightroom Classic, which I hadn’t used before. However, after a short time familiarizing myself with the Loupedeck+ layout, I found myself deep in the editing process with my eyes fixed on the images I was working on instead of darting back and forth hunting for the tools I wanted to use.

I may never enjoy the sort of time savings that a professional photographer could squeeze out of the Loupedeck+. However, simply knowing that I can dip in and out of Lightroom Classic for my editing needs with virtually no learning curve eliminates a significant hurdle that has slowed me down in the past. Although there are aspects of the Loupedeck+ that could be improved, it’s an incredibly powerful tool that fits into more workflows than I anticipated, which makes it an accessory worth considering for a wide range of users.

END_OF_DOCUMENT_TOKEN_TO_BE_REPLACED

In a video shared earlier today, Tom Hogarty, who’s a Lightroom product manager at Adobe, demonstrated an upcoming feature of Lightroom for iPad – the ability to import photos from external devices (such as cameras, drives, or SD cards connected over USB-C) into Lightroom’s library without copying them to the Photos app first.

Here’s how it’s going to work:

The workflow looks very nice: an alert comes up as soon as an external device is detected, photos are previewed in a custom UI within Lightroom (no more Photos overlay) and they’re copied directly into the app. I think anyone who uses Lightroom for iPad to edit photos taken with a DSLR is going to appreciate this addition. Keep in mind that the 2018 iPad Pros support up to 10 Gbps transfers over USB-C, which should help when importing hundreds of RAW files into Lightroom.

Direct photo import from external USB storage devices was originally announced by Apple at WWDC 2019 as part of the “Image Capture API” for iPadOS. When I was working on my iOS and iPadOS 13 review, I searched for documentation to cover the feature, but I couldn’t find anything on Apple’s website (I wasn’t the only one). Eventually, I just assumed it was part of the functionalities Apple delayed until later in the iOS 13 cycle. It turns out that this feature was quietly introduced by Apple with iOS and iPadOS 13.2, as also suggested by Hogarty in the Lightroom video.

According to this thread on StackOverflow, direct photo import is part of the ImageCaptureCore framework, which is now also available for iOS and iPadOS. I still can’t find any documentation for it on Apple’s developer website. 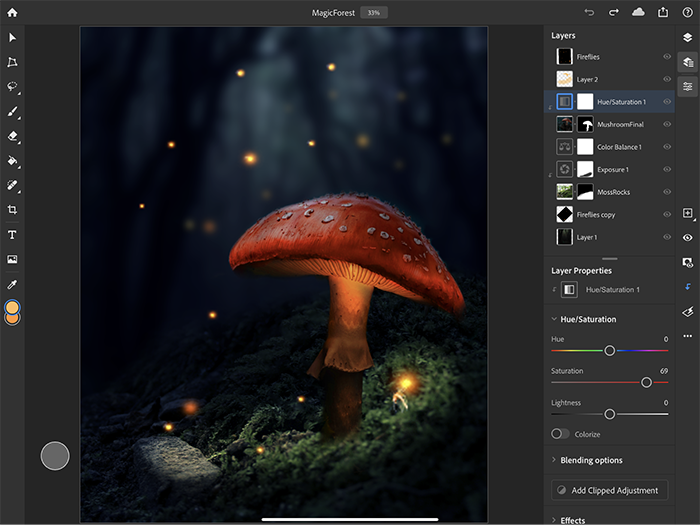 Adobe MAX begins today in Los Angeles and runs through November 6th. As in past years, the three-day conference is an opportunity for Adobe to announce new products and updates to existing ones.

Last year, Adobe previewed Photoshop for iPad and Aero, an iOS AR creation tool. Today, those apps are finally out of beta and are available to everyone in the App Store. In fact, both Photoshop and Aero showed up on the App Store the evening before the start of MAX, providing me with a little hands-on time with them in advance of their official release.

Adobe has also previewed an iPad version of Illustrator, another of its core Creative Suite apps, which the company says will be available sometime in 2020.

Adobe’s announcements are packed with updates to a wide range of its products, but there’s a clear focus this year on mobile apps. In addition to Photoshop, Aero, and Illustrator, the company also announced updates to Lightroom for iOS and iPadOS and its Rush video creation app.

However, the centerpiece of Adobe’s mobile announcements is Photoshop, the company’s iconic professional design app relied upon by creative professionals worldwide. Ever since word of Photoshop for iPad was leaked to Bloomberg’s Mark Gurman in July 2018, the idea of ‘full’ or ‘real’ Photoshop on the iPad has captured imaginations. That initial leak, combined with Adobe’s early marketing efforts, led to outsized expectations for the first version of the app.

Instead of the full-featured, desktop-replacement app that some people were expecting, Adobe says that it has built a foundation with its new cloud-based PSD files and Photoshop’s desktop engine, upon which it will evolve with the guidance of users. Based on what I’ve heard from Adobe and seen from my limited use of the app, I believe the company truly is committed to building a more fully-featured version of Photoshop for the iPad; however, it doesn’t appear that users will be able to abandon their desktops anytime soon.