Remember when there was so much talking about the iPad having problems with wifi connections and disconnecting from networks?  Some U.S. colleges even banned the device due to these problems with wifi. Apple has finally updated a support document about the issue including some “workarounds” to get wireless connections working properly on the iPad:

- Verify your Wi-Fi router firmware is up to date.

- If your router’s security encryption is WEP, try WPA or WPA2, as WEP can cause intermittent disconnects with the iPad which requires retyping a password.

- Make sure the iPad screen brightness is not at the lowest level.

- Obtain a new IP address by going into Settings, Wi-Fi, accessing the settings of the current network, and choosing “Renew Lease.”

- Finally, if these steps do not work, users are recommended to try turning Wi-Fi off and back

Also, the issues will be fixed with a Software Update. I can see OS 3.2.1 coming by the WWDC.

So we’ve been able to browse the iPad from the Finder, but what about browsing a portable drive from the iPad. Turns out you can connect a USB flash drive using the camera connection kit and browse its content using iFile (from Cydia, must have file browser).

Check out the video after the break. [via iPadevice]

END_OF_DOCUMENT_TOKEN_TO_BE_REPLACED

Thanks to AppAdvice, here’s a complete (almost, only Japan is missing) chart of the various iPad Wifi + 3G data plans around the world. 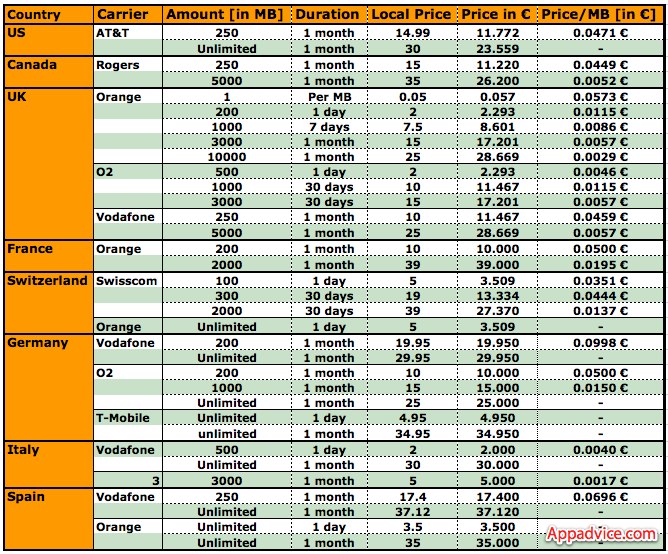 People want to be productive with their shiny new iPad, and so they spend on good productivity apps in the App Store. But if a developer has to deal with Apple’s revenue and such, what about Apple’s own paid apps - Pages, Keynote and Numbers?

According to the latest estimate reported by 9to5mac, Apple could make more than $40 million a year with the iWork apps for iPad.

“How did they work it out?

- All the iWork apps have been in the top ten since the iPad launched, with Pages at number one.

END_OF_DOCUMENT_TOKEN_TO_BE_REPLACED

Whilst in my $2 Staples stand dock thing, my iPad virtually does nothing as it recharges for the morning. Cup of coffee and keyboard in hand, I often pondered the ways it could make me more productive or more informed before its later afternoon usage. Enter Tweet Flow (tweet Flow? tweetFlow?), a pretty great iPad Twitter client that’s excellent for displaying recent tweets in big text.

END_OF_DOCUMENT_TOKEN_TO_BE_REPLACED

Finding a good PDF Reader has become somewhat of a chore. Well - not really. But there are certainly lots of solutions out there that make picking one difficult. After all, nobody wants to pay for five different PDF readers before finally finding the perfect one. So today I present to you my favorite so far, PDF Reader by Kdan Mobile Software.

END_OF_DOCUMENT_TOKEN_TO_BE_REPLACED

I bet you’ve already shown your iPad off to your friends and relatives, who surely were impressed by the ease to use of Apple’s new device. If you’re really that kind of guy that collects photos of vacations and stuff, then you might consider giving a try to ScrapPad.

Developed by Album tArt, ScrapPad is a simple and great-looking scrapbooking utility that lets you choose from multiple colorful kits, attach photos and include borders and backgrounds. You can do almost everything you could ever do with a real scrapbook, and the feeling itself is pretty good too. You can pull, drag, pinch and zoom, enter text, create unlimited scrapbooks and even share them on Facebook.

The app is 20% off during the introductory period and available at $3.99 in the App Store. Check out the screenshots after the break, and go download the app here.

END_OF_DOCUMENT_TOKEN_TO_BE_REPLACED

Redmond Pie has posted a tutorial on how to control a jailbroken iPad with a Magic Mouse. The hack requires you to install the BTstack Mouse app from Cydia, but the overall setup process looks very easy.

Check out the video after the break, and go jailbreak your iPad if you still haven’t.