I’ve been tweaking and updating the page for the past three months, and it now includes 20 apps that have implemented keyboard shortcuts. The page has a custom sub-domain at ios-shortcuts.macstories.net, and it comes with an index of apps at the top to easily see supported apps and click to instantly jump to a specific one. Each app has links to iTunes, website, and additional documentation if available.

If you’ve developed an iOS app with external keyboard integration, let me know on Twitter or over email and I’ll add it to the list. Check out the page here. 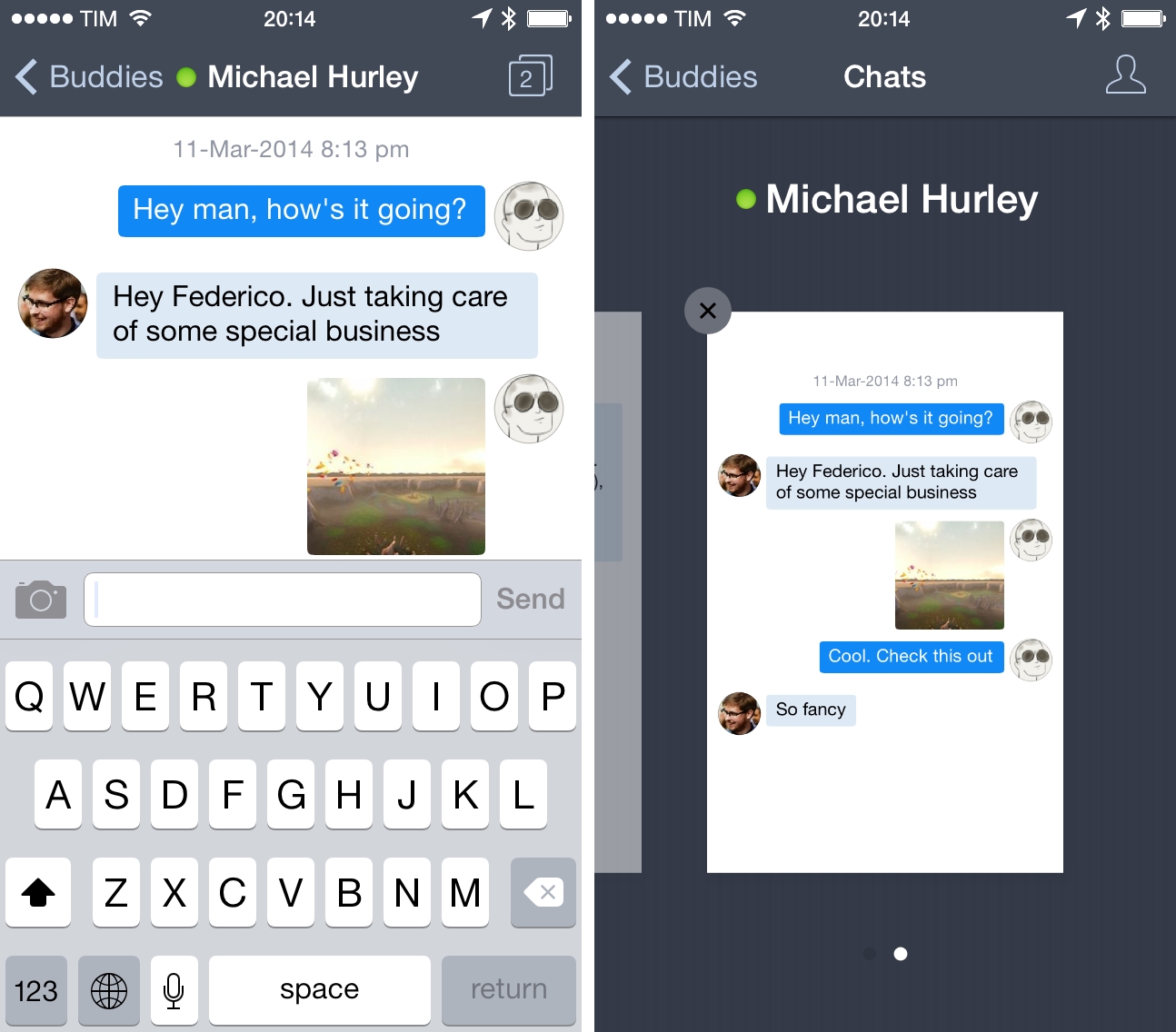 Previous owners of Verbs, an instant messaging app for iOS, will find a free update on the App Store that readies the app for iOS 7, while introducing a slew of new notification options, support for Jabber, and integration with Dropbox for sharing files and photos in chat. Verbs has also added a couple of read later options for sending links to Pocket and Safari’s Reading List.

As conversations take place outside of the conversation view, the status bar will flicker when new texts appear, much like status updates in Tweetbot or Mailbox. Inside the conversation view, Verbs has added some small contextual changes to message bubbles, changing their color when they’re delivered, and adding the option to use shapes to indicate your buddy’s availability status.

Dropbox integration with the app works out of the gate without a lot of setup. If you have Dropbox installed on your iOS device and are already logged in, you can pick a file and share the link with a friend. If you setup your Dropbox account, you can add files as well.

While I still don’t like how you switch between conversations views throw a Safari-like carousel, the remainder of Verbs feels fresh, and the app has always maintained a decided simplicity for simply sending and receiving messages from common services. If you don’t have Verbs yet, you can give it a try for $2.99 from the App Store.

I was surprised when Apple announced that iOS 7 would run on 2010’s iPhone 4, mostly because the OS seemed to make use of graphical effects, transitions, and animations that looked like great candidates for poor performance and hiccups. Indeed, iOS 7 on the iPhone 4 (and to an extend, the iPad 3) was, in my experience, insufferable: animations were slow, scrolling would often drop frames and stutter, and everything felt generally sluggish.

Ars Technica’s Andew Cunningham has run tests to measure the speed improvements of iOS 7.1 on the iPhone 4. The changes are noticeable, but, more importantly, the update makes the OS fluid and snappy – usable, at least. iOS 7.1 cuts the execution time of animations on all iOS devices, but the difference for the iPhone 4 is even more apparent.

It is a good thing that Apple is still supporting a four year-old device with the latest version of iOS (albeit with missing features), and I’m glad that iOS 7’s possibly one and only major update focused on making performance acceptable on older devices for the future.

As reported by Doug Thompson, a change in iOS 7.1 now allows iBeacon-enabled apps to look for beacons and fire off notifications even when closed and after a device reboot:

After opening an iBeacon app we hard closed it: not just putting it into the background tray but swiping it closed entirely. The phone still detected beacons and sent a message through the lock screen, something which in the past was reserved for apps that were at minimum running in the background tray.

The functionality even works if you reboot your device: after you power down your phone and start it up again, it will continue listening for beacons even if you don’t open up the app again.

As Doug notes, this is an important change for how iBeacon works with iOS apps – it sounds like it’s now more stable and it should always work, removing the need to make sure an app is running.

For retailers, museums, and any other place with iBeacon support, this means that launching an app the first time should be enough to have it always ready to listen for beacons in the future (unless the app gets uninstalled of course). And because the technology is based on Bluetooth LE, the impact on battery life should be minimal to non-existent. This seems like a great change for iBeacon. 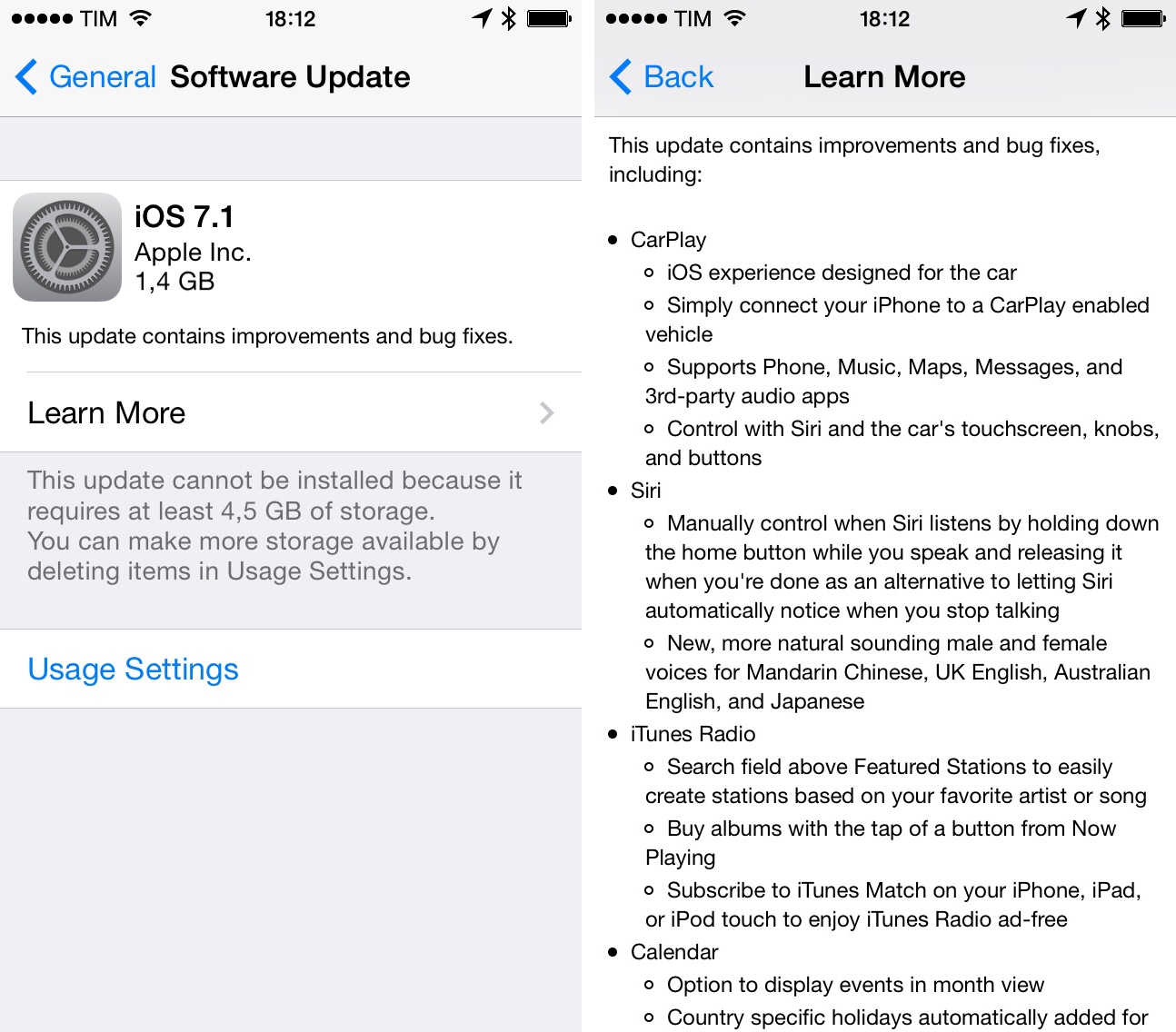 Apple today released iOS 7.1, the company’s first major update to iOS 7, which was released in September 2013. iOS 7.1 has been in testing with registered iOS developers since November, and it brings a variety of bug fixes, performance improvements, faster animations, CarPlay, user interface changes, and minor tweaks.

END_OF_DOCUMENT_TOKEN_TO_BE_REPLACED 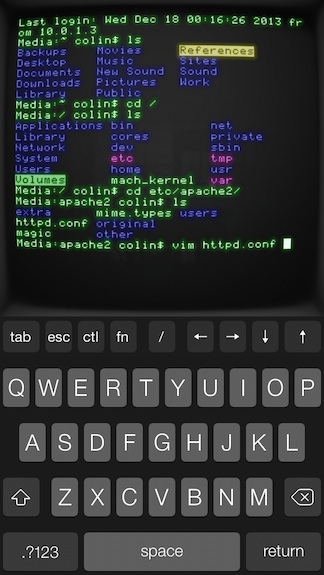 Your favorite customizable terminal app for the Mac is now available for iPhones and iPads, letting you wirelessly connect to any computer offering SSH access. The app gives you lots of control over its vintage look and feel, letting you change color, lighting, “shape,” and your choice of retro bitmap fonts. For iPad owners, the app supports Bluetooth keyboards, and works in both portrait and landscape orientation. Cathode supports multiple sessions and can automatically connect to nearby computers using Bonjour. For the geeks out there, Cathode costs a cool $5.99 from the App Store.

Matt Brian of Engadget spoke with an Apple representative at the International Motor Show in Geneva about CarPlay, and he recorded a video of a CarPlay demo in a Ferrari FF coupe.

The video is interesting for several reasons. First, as with Volvo, CarPlay is (unsurprisingly) a feature of the onboard system, as Ferrari is keeping its existing infotainment system and letting drivers with an iPhone access CarPlay separately. There’s an “Apple CarPlay” physical button to load the Apple UI, which, when in the foreground, takes over other physical buttons’ functions – for instance, pressing the “Navi” button when in CarPlay mode will go directly to Apple Maps. The screen appears to be a resistive touch screen: there are no multitouch gestures or swipes in the demo, and horizontal/vertical navigation is always done with software arrows rather than regular scrolling; it’s not clear whether scrolling will be possible on other screens or if it’s a design decision by Apple.

Update: A demo by Volvo shows various instances of scrolling, which suggests Ferrari chose a different implementation of CarPlay navigation for their demo.

The demo shows Apple’s reliance on Siri, which speaks texts and other information (preventing the driver from being distracted by the screen), and it demonstrates how CarPlay looks into email, messages, and calendar appointments for addresses to use in Maps destinations.

Brian also asked about third-party app support: apps that will receive CarPlay integration through the App Store will be automatically transferred from an iPhone to CarPlay and show up on the CarPlay UI, although Apple hasn’t confirmed whether there will be an SDK for developers just yet.

There’s a lot of early details and information to be seen in Brian’s video, which you can watch here.

In a press release (via setteBIT), Volvo has confirmed that CarPlay – officially announced by Apple today – will be coming to their new XC90 SUV this year, allowing drivers to use Volvo’s on-board system and CarPlay simultaneously on a single, portrait-oriented screen.

“Apple’s clean and intuitive user interface is a perfect match with Volvo’s Scandinavian Design approach and our focus on fluid functionality,” says Håkan Samuelsson, President and CEO of Volvo Cars.

The first car to offer Apple CarPlay will be the all new XC90 SUV which will be introduced later in 2014, one of the most anticipated cars of recent years, replacing the original XC90, which redefined the SUV and became the best selling model in Volvo Cars’ history.

In a video released today, Volvo shows how Apple’s CarPlay will essentially become a feature of the existing on-board system, providing drivers with a way to invoke the CarPlay interface manually to show the grid of icons configured to work with an iPhone. As Volvo notes in the press release, this approach removes “the need to switch between a dedicated car and iPhone screen”, and the video shows, for instance, how CarPlay can remain visible in the background while the driver adjusts the climate control through a separate overlay.

In the video, Volvo also demonstrates Siri integration in Messages, Apple Maps for navigation, and there’s a brief appearance of the Spotify app for CarPlay. Various interactions are shown by Volvo, such as the possibility to read and send messages through voice or with large buttons in the middle of the screen, the possibility to scroll through multiple results for map search, and a Siri UI reminiscent of the facelift Apple’s voice assistant received with iOS 7.

Last, Volvo shared a few technical details of their CarPlay implementation in the press release as well:

Apple CarPlay allows connection of the device to the car through a Lightning cable – with Wi-Fi coming in the near future. The connection is based on a streaming H.264 video feed that returns user input from the touchscreen. Apple CarPlay will be available in forthcoming Volvo models based on the new Scalable Product Architecture (SPA), starting with the all-new Volvo XC90 later in 2014.

Apple’s “iOS in the Car” initiative, first introduced at WWDC in June 2013, will launch as “CarPlay”, the company announced today in a press release. Premiering with an initial lineup of auto manufacturers that include Ferrari, Honda, and Mercedes-Benz at the Geneva International Motor Show this week, CarPlay will provide a dedicated interface for iOS features in the car, working with existing touch screens, buttons, knobs, and other physical controls to allow drivers to reply to messages, answer phone calls, listen to music, and more. CarPlay is an extension of iOS 7, and will work with the iPhone 5, iPhone 5s, and iPhone 5c through the Lightning connector. END_OF_DOCUMENT_TOKEN_TO_BE_REPLACED