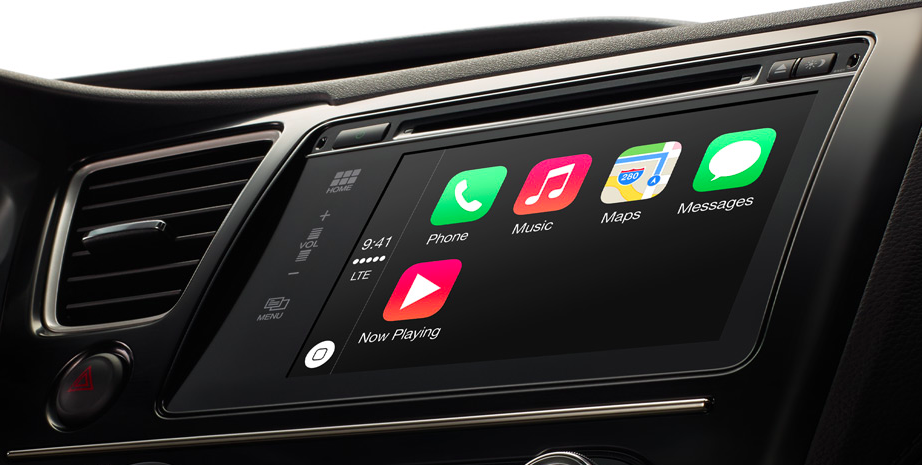 Apple’s “iOS in the Car” initiative, first introduced at WWDC in June 2013, will launch as “CarPlay”, the company announced today in a press release. Premiering with an initial lineup of auto manufacturers that include Ferrari, Honda, and Mercedes-Benz at the Geneva International Motor Show this week, CarPlay will provide a dedicated interface for iOS features in the car, working with existing touch screens, buttons, knobs, and other physical controls to allow drivers to reply to messages, answer phone calls, listen to music, and more. CarPlay is an extension of iOS 7, and will work with the iPhone 5, iPhone 5s, and iPhone 5c through the Lightning connector.

CarPlay is heavily reliant on Siri: once activated, drivers can use Apple’s voice assistant to control music playback and ask for directions with Maps, compose new text messages, make calls – all while staying focused on the road as much as possible. From a visual standpoint, CarPlay appears as an evolution of the iOS 7 design language optimized for the different form factor of car displays: there is a “Home screen” with icons for apps such as Messages and Music, as well as indicators for an iPhone’s signal strength, the current time, and a touch version of the Home button. While the iOS interface has been redesigned to fit on horizontal displays, the underlying principles are familiar to existing iOS 7 users: clean iconography, translucencies, and circular buttons are reminiscent of Apple’s iOS 7 and upcoming iOS 7.1 software update (which will likely come with CarPlay built-in).

In the press release, Apple has shared details on how CarPlay and Siri will work alongside iOS 7. Once an iPhone is connected, CarPlay will be able to access various information stored in a user’s contacts, emails, and texts:

Once iPhone is connected to a vehicle with CarPlay integration, Siri helps you easily access your contacts, make calls, return missed calls or listen to voicemails. When incoming messages or notifications arrive, Siri provides an eyes-free experience by responding to requests through voice commands, by reading drivers’ messages and letting them dictate responses or simply make a call.

CarPlay makes driving directions more intuitive by working with Maps to anticipate destinations based on recent trips via contacts, emails or texts, and provides routing instructions, traffic conditions and ETA. You can also simply ask Siri and receive spoken turn-by-turn directions, along with Maps, which will appear on your car’s built-in display.

CarPlay will debut this week in Geneva on vehicles from Ferrari, Mercedes-Benz and Volvo, which are three of the initial launch partners (others are Honda, Hyundai, and Jaguar); according to Apple, committed partners include BMW Group, Ford, General Motors, Jaguar Land Rover, Kia Motors, Mitsubishi Motors, Nissan Motor Company, PSA Peugeot Citroën, Subaru, and Suzuki (notably absent for now: Volkswagen and FIAT & Chrysler groups). The car manufacturers included in Apple’s announcement today are mostly the same ones that the company showed on slides at WWDC 2012 (when it was known as “Siri Eyes-Free”) and WWDC 2013 (Apple’s “in the car” initiative has faced numerous delays to date), albeit the final version of CarPlay shows design differences from what the company demoed last June. 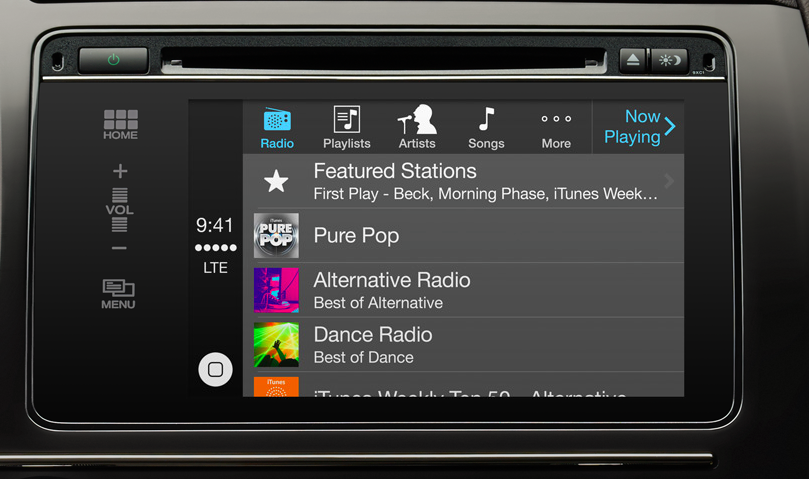 Today, Apple also launched a mini-site for CarPlay, showing screenshots of the interface and support for third-party apps, such as Beats Music, Spotify, and iHeartRadio. However, in the press release Apple stated that CarPlay will work with “select third-party audio apps”, suggesting that the company is seeking third-party partners with a private SDK rather than allowing any developer to build support for CarPlay, at least for now. On the CarPlay website, Apple says to “stay tuned for even more supported apps coming soon”.

Select cars with CarPlay integration will ship in 2014. As shared by Apple in a feature availability page, CarPlay will be “coming soon” in Australia, Canada, France, Germany, Hong Kong, Italy, Japan, Mexico, Republic of Korea, Spain, Switzerland, UK, and USA.