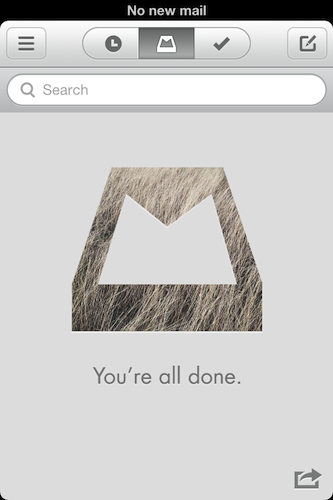 Orchestra, the company originally behind Mailbox, set out to redesign the traditional mobile email app by transforming the inbox into a to-do list. Recently acquired by Dropbox to the tune of $100 million, Mailbox has been making waves in the media on the promise of helping people act-on their email more quickly and efficiently. Anticipation for the free email app began late 2012 and came to boil over as the app launched in February, thanks to an incredible amount of press attention and clever marketing through Twitter.

Questionably, Mailbox launched with a reservation system to cope with demand. Available on a first come, first served basis, Mailbox was initially only available to those who signed up for the service early-on. So far, over a million people have signed up to use the app, and the company has filled over 500,000 reservations according to a recent TechCrunch interview with Mailbox founder Gentry Underwood.

Mailbox has had its fair share of both praise and criticism. Understandably there’s a healthy amount of skepticism over whether Mailbox actually helps you deal with the bulk of email people receive in their inboxes.

I gave Mailbox my phone number before much of the recent press, leaving me with a reservation somewhere in the early 20,000s. My reservation was filled relatively quickly. As I downloaded the app, I decided I’d pass on early impressions to get a good feel for whether Mailbox could be my daily driver on the iPhone.

As Mailbox is structured around the principles of Inbox Zero, the actions that can be performed are built on top of making quick decisions about what’s necessary to keep. With mobile in mind, Mailbox is designed to help people quickly archive, delete, snooze, or put email in a “do someday” list. People are always checking their phones throughout the day, so why not give people an easier way to weed out the things that don’t matter?

Mailbox works on top of your current email service (which is only Gmail at the moment), obfuscating folders and placing emphasis on what’s in the inbox. At the end of the day, the remaining messages in your inbox are the things you have to take care of either in the app or elsewhere. An empty inbox, Inbox Zero, indicates you’re done.

So far I’ve spent a month with Mailbox as my dedicated email app on my iPhone. The lingering question for many people is whether Mailbox will stick. I think Mailbox does something right, else I wouldn’t want to keep coming back.

My first evening with Mailbox was mostly pleasant. I archived, deleted, snoozed, and listed a few hundred messages in a 45 minute period. And I repeated this process as I added additional accounts. Granted, I could have done this on my accord at any time, but obviously I had both vested interest and some incentive to work with Mailbox. I wanted to replicate a likely first experience that many people will have when getting to Inbox Zero for the first time. I will note that not all of my messages were pulled down on the first run, leaving me to file away a couple dozen remainders from my laptop. This hasn’t been an issue since.

The bulk of Mailbox’s experience is comprised of swipe gestures which are the app’s bread and butter. A swipe to archive transitions into a delete if you swipe far enough, and likewise a swipe to snooze transitions into a list action. The ability to simply swipe messages away are what makes Mailbox interesting and fun to use.

You can reorder messages by dragging them up and down. I haven’t used this feature too much, but if you portion out parts of your day for email, you could rearrange messages in order of importance at noon before taking care of them in the evening.

I’ve only snoozed messages a few times, but I try not to use it as a procrastination tool. I’m currently using the feature to remind me about a service change in a month, and I’ve used it to push back a Kickstarter survey when I needed more time to consider a contribution as a part of my reward. Another use I can think of is for scheduling bill reminders for a specific time of the month. I don’t depend on it, but if email is to be treated like a to-do list, it’s best to only show messages when they’re relevant.

Mailbox sets up lists such as To Buy, To Read, and To Watch, which you can move messages into instead of archiving or deleting them. Consider them places for newsletters, promotions, weekly roundups, etc. You can change them or add your own, but I wouldn’t. I haven’t yet made a habit of consistently checking these lists, but if they resurfaced emails or tied into services like Pocket for example, I think they’d be much more useful. Thanks to the popular automation service IFTTT, you can find recipes like this one that can add desired functionality.

Messages aren’t always as they appear in Mailbox. Before Mailbox delivers your email, it compresses your messages in an attempt to leave only what’s relevant. Sometimes this means that promotions or newsletters you signed up for won’t gel with Mailbox since images with important text are stripped away in the process. Unlike Gmail which simply hides images and asks permission to show them, Mailbox may leave them out completely. I wish I could ask Mailbox to show me the original message for these cases.

Mailbox currently works on top of Gmail, creating its own set of nested labels to take care of its internal features. However, archiving still means putting messages into All Mail for example. If you’re already filtering and labeling emails as they come in, Gmail will still do all of those things in the background. Labels in Gmail just won’t appear in Mailbox. For me it’s not an issue. Some additional potential downsides are that Mailbox has you work exclusively out of a universal inbox, and currently you can only have one signature that applies to all accounts (not per account).

Inbox Zero is Mailbox’s goal as it’s the app’s sole indicator that you’ve taken care of your responsibilities. In fact, Mailbox rewards people who get to Inbox Zero by displaying a scenic photo from Instagram. Mat Honan, who wrote an initial take on Mailbox for Wired, is right to say that productivity shouldn’t be conflated with Inbox Zero. You could simply defer all of your email for tomorrow and end up with a reward without putting in the work. Because of the snooze feature, I do think Mailbox could contribute to some bad habits. Personally, how I handle email is really no different from Pat Dryburgh’s take on it. I just choose to get to an empty inbox instead of leaving a message or two in there. Unfortunately, Mailbox’s search isn’t as thorough as Gmail’s.

There is the question of whether Mailbox will help people who get huge volumes of email every day. The promise of helping people get to an empty inbox is what’s so alluring, but getting email is still getting email. The first run of Mailbox might give someone a reason to declare bankruptcy and start over, but I’m not sure anyone could keep up with a thousand or so daily emails with Mailbox alone. I do think it’s incredibly useful in weeding out a lot of distractors, but dealing with email itself is still a commitment. Mailbox aids in but isn’t necessarily a replacement email app for fulfilling that commitment. This could change if Mailbox becomes available on tablets and desktops.

I don’t know if email is broken, but Mailbox works for me because there’s less friction for what would otherwise require a tap of an edit button or a check of a checkbox. My smartphone is where I thumb through the bulk of my email, and Mailbox is befitting as I can quickly swipe to archive and delete messages as needed. The nice thing about processing email on your phone is that it helps you make snap judgements based on the subject line. Couple that with terrific gestures, and Mailbox becomes an excellent way to tackle messages on the go.

I’ve come to think of Mailbox as being designed to complement what you’re already using on your tablet or desktop. It’s an app that helps you sort out the unimportant stuff when you check your phone at a café or in line at the grocery store so that you only see what’s important later.

Lots of people casually check email throughout the day on their smartphones, and I think Mailbox’s similarities to a to-do list can help prioritize reminders and requests thanks to those unique features like reordering. Replies can be taken care of in the moment thanks to Mailbox’s smart conversation views, and messages can be archived away for later recollection with a simple swipe. Our smartphones are often where we get notifications first, allowing features like snoozing to become useful for event reminders, meeting notes, or even incoming grocery lists. The really important stuff can always be taken care of at the office.

Mailbox hasn’t launched with accompanying apps for other smartphones, tablets, or desktops, but for what it’s worth, it does feel at home on the iPhone. Mailbox has expressed wanting to be on more platforms as soon as possible, and I think the app’s recent acquisition by Dropbox will accelerate that goal. While currently free, Mailbox launched with the promise of charging for premium features at a later time. With Dropbox being a company that has refused potential buyouts and is successful by charging for its own service, I’m personally confident that Mailbox will follow the same path.

Sending feedback in Mailbox is easy and I’ve certainly sent my fair share of it. There’s lots of little things I’d like to see tweaked, such as a better pull-to-refresh animation, signatures per account, the ability to reorder accounts in the sidebar, the option to see the original message in full, and a unique notification sound. Perhaps unimaginative, they’re things that would make the app a little more polished on top of its current set of features. Imagine if photos emailed to you from family could automatically be saved to your Photos on Dropbox. There’s numerous subtle additions like this that Mailbox and Dropbox could tie together for a premium offering.

There’s still plenty of people waiting to use Mailbox, but I’d be surprised if Mailbox didn’t have their current queue taken care of by the end of April if not sooner. Considering Mailbox’s impressive current rate of scale, I think anyone interested should download Mailbox, reserve their spot, and tuck away the app on an unused home screen. It’ll be something you’ll want to check daily, but Mailbox will send you a notification when they’ve made room.

Mailbox is a free download from the App Store.