But what is the agency model and how does it work? I’ve done my best to explain the two systems and some of the details surrounding the model that was adopted by Apple and the publishers that are in hot contention. I’ve also summarised the DOJ’s allegations as well as their timeline of events that the DOJ goes into great detail in their court filing. Finally, if you find yourself fascinated by the topic, at the end of the post is a further reading section to get more details and some opinions on the issue.

Jump the break to view the full article and video explaining the wholesale and agency models.

Traditionally books were sold using a wholesale model. Publishers would set a Recommended Retail Price (RRP) and then sell those books to retailers at roughly half the price of that RRP; that price that the wholesaler sells the book to the retailer at would be called the wholesale price. Retailers would then sell the books at whatever price they wanted to – traditionally it would be around the RRP, but if they wanted to, they were free to offer those books at a price less than the wholesale price — meaning the retailer would be losing money on the sale of that product.

As publishers began selling e-books, they retained this wholesale method. So when retailers such as Amazon wanted to sell e-books they established wholesale contracts with the publishers. But Amazon, as part of their move to promote the Kindle device they sold, began to sell new release and best selling e-books at $9.99. This price was below the wholesale price. 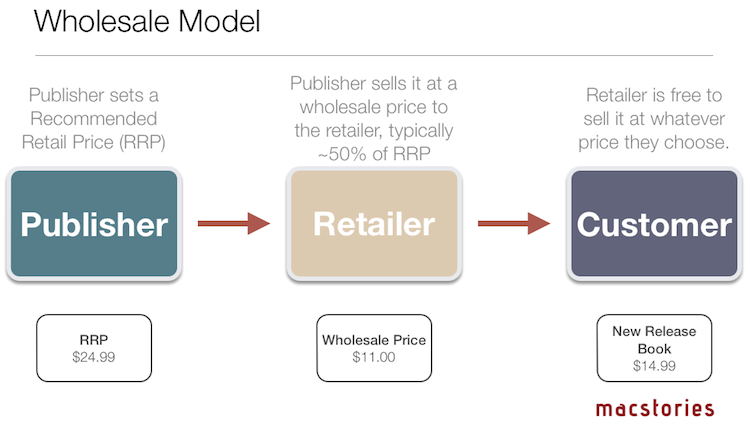 Amazon was relentless in their push for $9.99 prices on virtually all new release and best seller titles. The publishers were still getting the full wholesale price, but customers were getting e-books for less than that price and Amazon was willing to take a loss on them. Amazon made those e-books a loss-leader, meaning that they priced them at below cost-price in order to entice new customers to purchase a Kindle or perhaps even to encourage them to purchase other goods from Amazon.

A common example used to illustrate the idea of a loss-leader is that of the razor/blades example. Frequently the razor will be sold at a loss, but profit will be made as people purchase the blades.

When Apple launched the iBookstore it signed contracts with the big publishers to use the agency model, rather than the wholesale business model. The formation and some of the details of the agency model between Apple and the publishers is what is in contention with the DOJ. 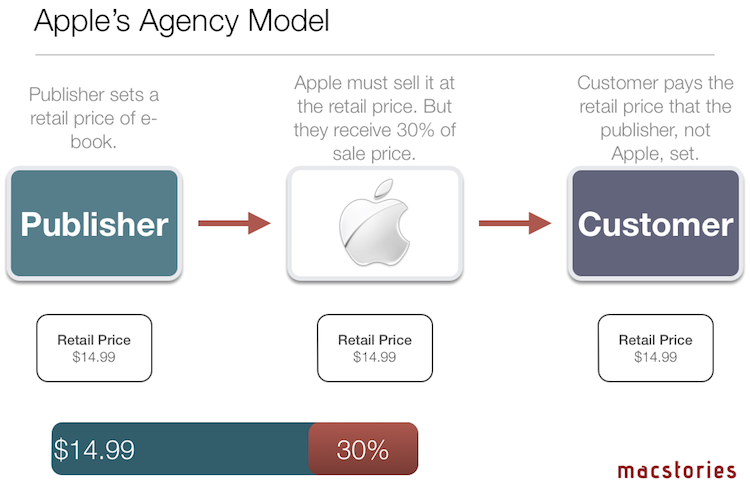 There was one other important aspect to the agency model that Apple established with the publishers – it included a most-favored-nation (MFN) clause. An MFN provision will frequently appear in contracts between wholesalers and retailers and it ensures that the wholesaler will provide the retailer with the best wholesale price. But Apple adopted it in the agency model to require that the publishers adjust e-book prices in the iBookstore to match the lowest price offered by any other retailer – regardless of whether the publisher controlled the pricing in that retailer.

The traditional purpose of MFNs are used to protect a retailer’s ability to compete, ensuring that they aren’t disadvantaged by the wholesaler giving their competitors a better deal. The DOJ contends that the way this MFN works, it was designed to “protect Apple from having to compete on price at all, while still maintaining Apple’s 30 percent margin.” Those are strong words, but there is certainly a kernel of truth to that. 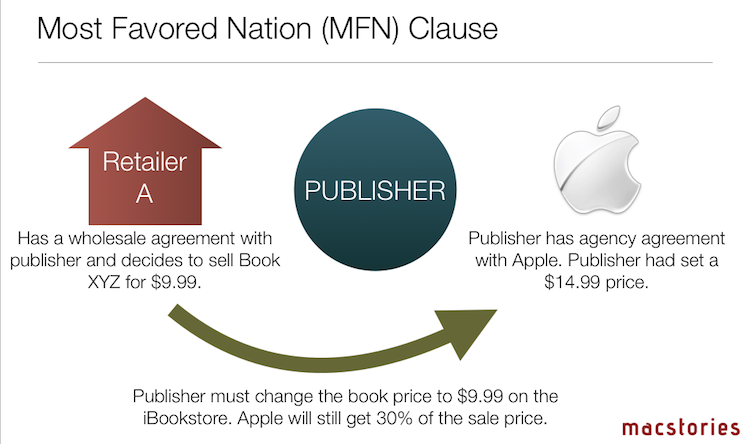 The DOJ’s Allegation in a Nutshell

To put it in the most simplistic sense, the DOJ is alleging that Apple and the publishers colluded to raise the prices of e-books by switching to the agency model where retail price competition would cease. More specifically, it alleges that not only did the various publisher executives meet to discuss issues of prices and the Amazon “problem”, but that when Apple negotiated with the publishers to adopt the agency model, Apple acted as a go-between to confirm to each of the publishers that the other publishers were signing up to the same agreement. They allege that the change to the agency model “would not have occurred without the conspiracy among the defendants”.

The DOJ contends that the direct result of this collusion to adopt an agency model is that retailers have lost their ability to compete on price. Further, they allege that the collusion meant that once publishers had control over prices, they limited retail price competition amongst themselves as well. Consequently, the DOJ estimates that “millions of e-books that would have sold at $9.99 or for other low prices instead sold for…$12.99 or $14.99”.

You can view the Department of Justice’s full court filing, which includes a 30-page plus timeline of events. I have summarised the key points that the DOJ makes below. Please note that some things are omitted in my version, including some context for events in order to shorten it to a reasonable length. I do encourage you to read the full document if you have the time and are interested in the issue, as it’s laid out in clear English and also includes the DOJ commentary on various events.

Competition for the attention of readers will be most intense from digital companies whose objective may be to disinter mediate traditional publishers altogether. This is not a new threat but war do appear to be on a collision course with Amazon, and possibly Google as well. It will not be possible for any individual publisher to mount an effective response, because of both the resources necessary and the risk of retribution, so the industry needs to develop a common strategy. This is the context for the development of Project Z initiatives [joint ventures] in London and New York.”

“at this point, it would be very easy for us to compete and I think trounce Amazon by opening up our own e-book store”

Bigger Than Agency, Bigger Than E-Books: The Case Against Apple and Publishers

The Apple/Amazon Conspiracy That Never Happened

Inside the DOJ’s ebook price-fixing case against Apple: an analysis

Agency seems (to me) to be working; I hope it’s legal