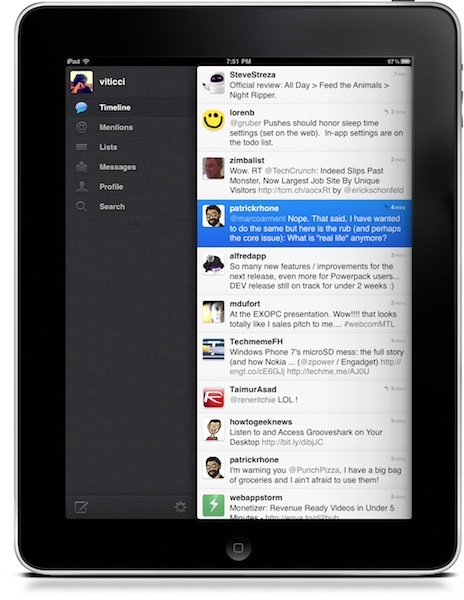 Twitter released an update to their official iOS app last night. The update includes the much talked push notifications for messages and mentions which, especially on the iPhone, really help in keeping track of what’s happening on Twitter when you’re not in front of your computer. I want to focus on the iPad version, though.

People went hard on criticizing Twitter for iPad when it first came out. Admittedly, it wasn’t the easiest “upgrade” to perform: until two months ago, users were accustomed to Osfoora HD and Twitterrific, two great clients that I still keep on my iPad because I don’t mind using them every once in a while. They’re beautiful and powerful pieces of software. Twitterrific has a huge userbase, but it doesn’t differ much from the iPhone version nor does it try to walk away from the standard established by Apple in Mail.app (sidebar in landscape mode, popover in portrait) being incorrectly used in thousands of other apps. I like Twitterrific, but it doesn’t give me the sense of trying something new, something revolutionary. Apps like Twitter for iPad, Aweditorium and Flipboard do. They bring a new, fresh experience to a new kind of device that seven months after its release still manages to surprise me.

It is not just a matter of innovation. When innovation meets usability and creates an experience you won’t easily forget – that’s where the great apps lie. Twitter for iPad surprised me two months ago, and impressed me again last night. Brichter fixed a lot of usability quirks spotted in the first version of the app, implemented a new way to dismiss panels and go back to the “root”, got rid of the “pinned tweet” option no one really enjoyed. Was the app perfect? No, of course not. The fixes released yesterday confirm that. But did it stand out from the crowd? Yes. And it still does.

Osfoora is probably a perfect app already. The developer took the solid foundation of the iPhone version, he made the app bigger and ported it to the iPad. He refined it with a few updates, then left it there in the App Store, selling copies on copies. That app is probably perfect for the thousands of users tweeting from it every day. I believe that in life one has to do more than settling, though. Innovation makes you imperfect, because you’re not conforming to the standards. Those who are used to standards will find everything that’s wrong with your (even slightly) innovative product; from their standpoint breaking rules is breaking a status. Those are the same people who wrote the iPad “sucked” because it didn’t have a physical keyboard.

Many Twitter clients have achieved a status quo. Loren Brichter and the Twitter mobile team clearly are developers and designers who believe in the power of innovation. Because while leading to imperfection, innovation can be the best thing that ever happened to your creativity. A truly creative mind does need innovation to move to “the next step”. Which is releasing products that leave something more than just a pack of features to the user.

So when people ask me why I use Twitter for iPad and why did I believe in it when it came out, I don’t answer by talking about panels and inline media viewers. Those are great, but they’re not my point. I use Twitter for iPad because I believe the combination of innovation and usability leads to better products. You can disagree and tell me Twitterrific is the best, Osfoora is the best and mostly everyone else is the best. They probably are.

But I want imperfection. I want to feel a great product. For as absurd as it sounds, imperfection leads to a better understanding of innovation.

So don’t ask me if I think Twitter for iPad is perfect. And don’t ask me about what’s needed to be perfect either, because I don’t settle.