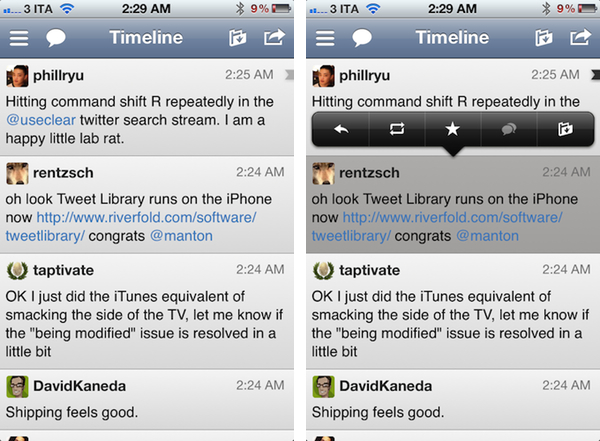 The last time I wrote about Twitter clients, I noted how I’d rather settle with a single app for power users, and have other developers innovate on top of Twitter and the technologies offered by Apple to provide a unique take on the standard Twitter experience. Unfortunately, until today very few developers seem to have believed in the market potential for innovative Twitter clients that go beyond refreshing your timeline and catching DMs, with Riverfold Software’s Tweet Library being the best example of what’s possible to do by leveraging the Twitter API, focusing on another kind of experience.

I initially reviewed Tweet Library when it hit version 1.0 on iPad. I wrote:

Tweet Library is a searchable local archive of your Twitter activity, with promising online functionalities that show good room for improvement. At $9.99 in the App Store it might not be an app for everyone, but if Twitter curation is your thing, this is the best you can have on the iPad right now.

Released earlier today, Tweet Library 2.0 offers some fantastic improvements for those who began using the app on the iPad last year, adding a completely new iPhone interface as part of the free, universal update that will have Twitter curation nerds drooling in new functionalities.

Those already familiar with Tweet Library will find the same functionalities of the old version, only enhanced for iOS 5 (which is now a requirement) and brought up to speed with Twitter’s latest additions to the service, like native photo uploads, which are now directly supported in Tweet Library. Similarly, many bugs related to loading items in your timeline or saved searches have been fixed, making Tweet Library more reliable at fetching older tweets in your stream also thanks to an improved timeline gap detection system that works fairly well (albeit not as amazingly well as Tweetbot’s). Whilst a full list of all of the minor improvements and refinements is available on iTunes, you have to keep in mind that the familiar look of Tweet Library (which isn’t nearly as custom and shiny as Tapbot’s or The Iconfactory’s UI choices) has been preserved, leaving much room for interaction and customizations in the sidebar list – a distinctive feature of Tweet Library that, especially on the iPad, makes it easy to create new saved searches and filters for content you want to aggregate (such as check-ins and photo uploads). Tweet Library’s custom pop-up menu is still there, allowing users to reply to tweets or star them, load a conversation, retweet, or move a tweet to a specific collection. The same menu allows you to copy a link to a tweet, copy text, or email a tweet on tap & hold, which is an excellent choice for those who prefer to save tweets in some other way.

Tweet Library works remarkably well on the iPhone. Scrolling smoothness and animations have never been the app’s main selling point, but I found this 2.0 update to be very stable and reliable when it came to loading thousands of archived favorite tweets (Tweet Library can be instructed to keep a local, searchable archive of your tweets with automated downloads you can configure in the Settings) – in this regard, Tweet Library is still the best option around if you’re looking for an iOS app that goes leaps and bounds beyond Twitter’s own search index with collections, filters by keyword or date, local archives, and exporting options. The new iPhone interface is a nice adaptation of the iPad’s counterpart, and I particularly like how crisp the sidebar icons are on the Retina Display. 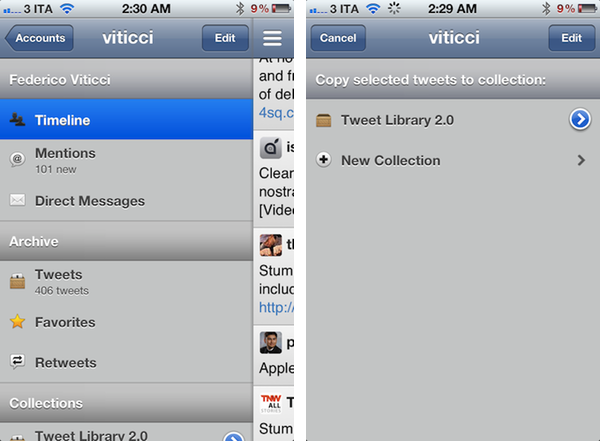 Tweet Library isn’t my main Twitter client. In fact, I don’t think Tweet Library will be many people’s main Twitter app in the way Tweetbot or Twitterrific are. Tweet Library is an excellent Twitter companion app meant for those people that want to curate tweets or save them for future reference. It’s the app you’d want to run alongside your Twitter client of choice, an app that provides basic access to Twitter functionalities (that’s why you can still use it as your main client if you want to) to leverage powerful curation features for users who care about saving tweets for later. So, Tweet Library is my “other main client” – the app I’d fire up to save tweets during an Apple event, a major controversy on Twitter, or just about any day to save tweets that I find interesting and worth keeping somewhere else.

In fact, Tweet Library 2.0 builds on the great tweetlibrary.com service offered in version 1.0 to provide Storify integration to publish your collections online. Readers who have been following MacStories lately know that I love Storify, and Tweet Library is sort of a dream come true for the curation geek in me, as I’m now able to collect tweets within the app, publish a collection to Storify, and tweet a link to it in seconds. Tweet Library only sends collections to Storify though – it won’t let you edit them or manage them – so you might still need to head over a desktop browser to make some final adjustments and add extra polish to your social story. This is, however, the first app that brings native Storify integration to iOS, and I believe Tweet Library and Storify are a perfect fit for each other – now that I think about it, it feels like it should have always been this way. I don’t see Storify integration as “competition” inside Tweet Library: tweetlibrary.com is still the default service for saving tweets, and I think Storify support can be seen as a “feature” inside Tweet Library itself.

Tweet Library is a must-have for people who see more in Twitter than just a way to share cat pictures. Those who value Twitter as today’s fundamental information sharing platform will be pleased to see some terrific improvements in version 2.0 of Tweet Library, including the ones mentioned above and others such as Pinboard support, better display of Tweet Marker’s status, a new profile popover menu, and a new pull-to-refresh behavior in Archive. If you’ve never heard of Tweet Library or you were waiting for an iPhone version, now it’s a good time to invest $9.99 in an app that will help you get more out of Twitter going forward.