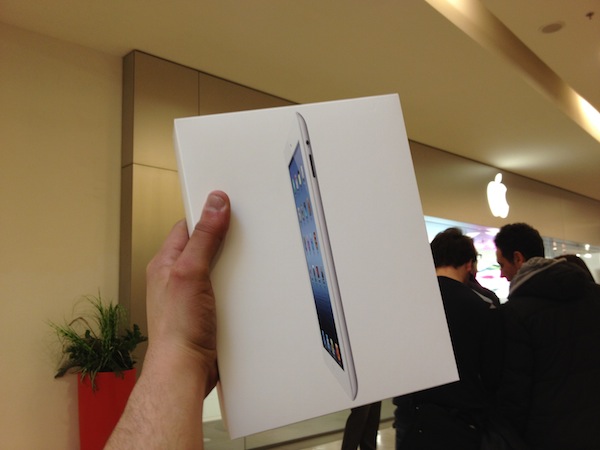 A few hours ago, I came back from the Apple Store at Roma Est driving all the way back home after a 19-hour wait for the new iPad. Tired – exhausted, my head exploding for the absurd coffee intake I forced my body into, but happy, smiling because I knew that what I had imagined all along didn’t turn to be true – it was better.

Until yesterday, I had never waited in line for an Apple product before. I always preferred driving to the store myself after a few days, or simply asking one of my US friends to ship me an iPhone or iPad without waiting for the Italian launch. A lot of people told me “I was missing out” – that for an Apple fan, getting in line to wait for a new product isn’t just about waiting, which is boring per se, it’s about knowing the people that share your same passion, not giving a damn about spending 20 hours of their lives to get “a device”. Today I can say buying an iPad was just the tip of the iceberg for what has been an incredible experience – something that I look forward to for the next big Apple launch.

I know I am late to the party. I’m fairly certain you all know what a “Day One” looks and feels like. Long lines, security staff, Apple employees, the cheering and the clapping before and during the launch. All that felt new to me. Unexpected and familiar at the same time, as if I was getting to know for the first time a family that, however, I had always known somehow.

It’s no exaggeration to call the people I got to meet in real life last night an extended family. I wrote about the Apple Community before, but actually meeting the people I mention so often is different. I shook hands and made bad jokes 5 minutes after arriving at the line. I talked to folks I only “knew” through Twitter and Facebook, and got a chance to really know them from a much more rewarding perspective. I talked to the founder of another blog and spent two hours discussing the future, where we see things going for our sites, and the state of Italian Apple reporting in general. I introduced myself to Apple PR, finally giving a face and a smile to the people that keep in the loop about news and announcements. I shared meals, coffee – and lots of it – and exchanged phone numbers and Twitter handles. Because whilst I may have known some of those folks already, clicking on usernames and friend request buttons after knowing them felt more real. Necessary. Natural. An obvious consequence.

It was surreal. I mean, we’re talking about a bunch of people – from any kind of social extraction – waiting in line and sitting on the ground to buy a gadget. We are talking about employees of a big corporation, all dressed up in blue and clapping and shaking your hands because you are giving them money. Because you are the customer. And it was surreal, because it felt like you were there as a friend. As my girlfriend put it - “they make paying more pleasant, as if you are glad you are giving them money”. I don’t know if I’m “glad” I spent 700 Euros today. But I sure am happy to have paid for this product in that way.

On the other hand, it felt real. Surprisingly so. You are meeting up with these people you only know from profile pictures and wall posts, and you realize these are real people that have their history, their flaws, their bad jokes about food and sports, and all those traits that turn flaws into the thing we love the most about human beings: that we’re different. That we all have problems and may argue about politics and Android. But that, in the end, if 20 hours spent in line to get an iPad can make us laugh, we should celebrate those 20 hours. Appreciate them. Treasure them.

The more cynical of you might dismiss my words as the usual excitement of a nerd who is happy about paying for Apple products because it is this company’s big, evil plan to make us think we have a choice. You are free to think whatever you want. Maybe it is Apple’s grand scheme to get rich by providing a friendly customer experience. But we do have a choice, and we have chosen to make the most out of it. Those people, those stories – heck, those 13 espressos were real. There is no corporate strategy that will take that away from us. There is no exclusive or breaking news that can beat the fact that some of my readers can also be my friends.

In our review of the new iPad, Cody wrote “you won’t believe it until you see it”. I agree. The device is fantastic. But I ’ll add this: the greatest thing about Apple isn’t the product line itself. It’s the community. It’s the users and the developers and the journalists. It is you, reading this on an Apple device. It’s the Apple community using Apple products. And you won’t believe it until you experience it.