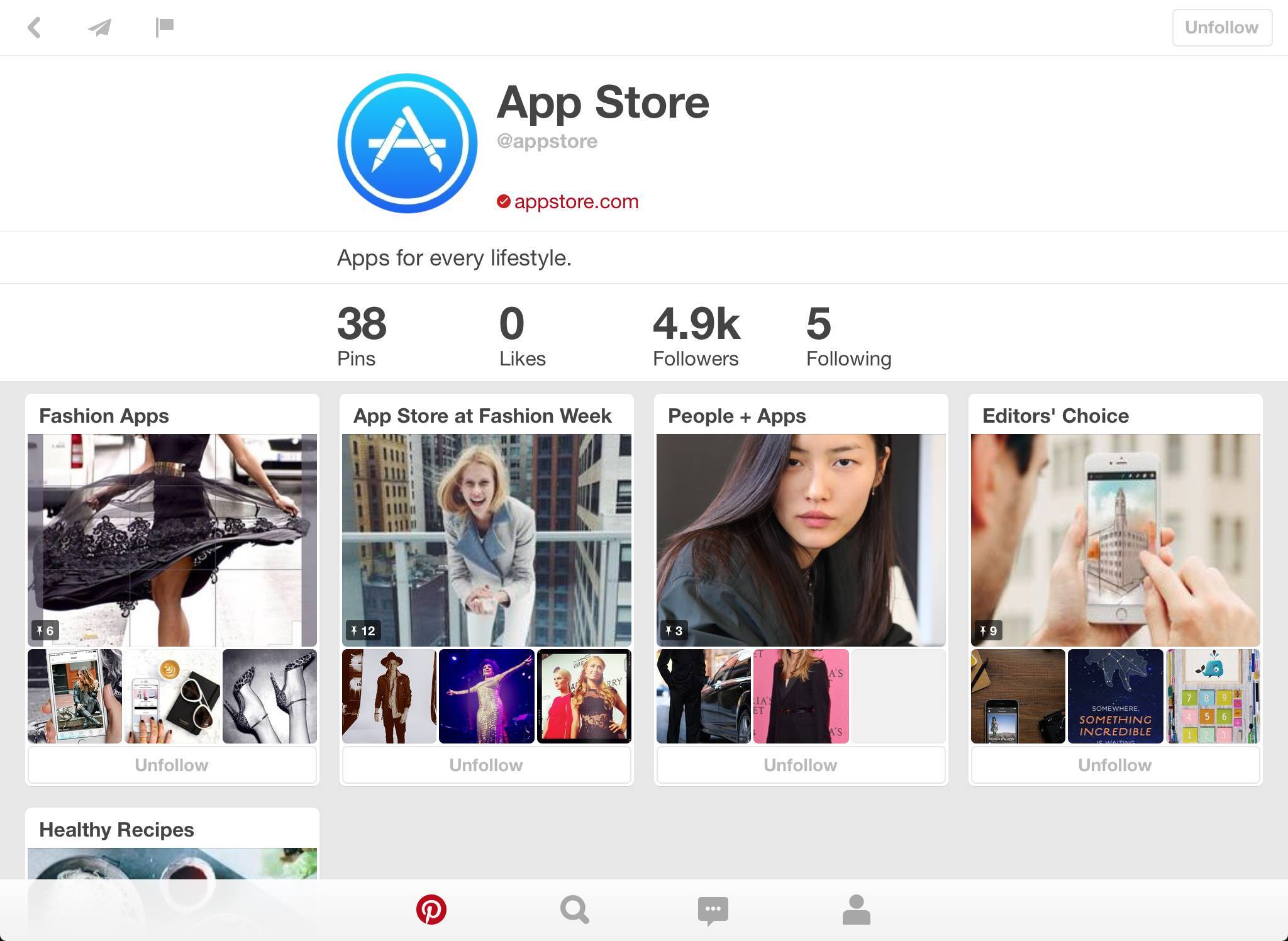 Last night, Apple and Pinterest announced a new collaboration that will see Apple curating app picks on the service, which has gained new special app pins with Install buttons. I can’t help but wanting to know more whenever the App Store and curation are involved; plus, I’ve been keeping an eye on Pinterest, and I find this new partnership fascinating.

Now if you’re on your iPhone or iPad, you’ll see another kind of Pin: app Pins. Let’s say you’re Pinning workout inspiration to your Marathon Training board. If you see a fitness app that helps you reach your goals, you can download it right from Pinterest.

And here’s The New York Times on the partnership and Apple’s role:

Along with Pinterest’s App Pins initiative, Apple will introduce its own curated App Store account on Pinterest, featuring multiple boards on the service on Thursday; it will use its in-house team to promote apps that will vary by season, theme and even the choices of so-called “guest pinners.”

The initiative is, therefore, twofold:

If the second part sounds familiar, it’s because of a music service that’s loosely based on the same curation principles that Apple also acquired: Beats Music. The concept of guest curators, seasonal collections, themed groups, and influencer favorites is one of the core tenets of music curation in Beats, and it seems like Apple is going after the same type of browsing experience for apps on Pinterest.

As for Fashion Week:

According to the company, the platform will serve as a dashboard for real-time app activity during all of the fashion weeks in New York, London, Milan and Paris. The App Store’s Pinterest page will feature content from Farfetch Discover, Snapchat, ASAP54, Lyst, Spring and PHHHOTO that will be updated for the duration of the Fashion Weeks, and influencers like Olivia Palermo and Cara Delevingne will share their go-to apps during the show season. The App Store’s social media team has also tapped iPhone photographers Katja and Mal Sherlock to share their work on Pinterest, and designer Valentina Kova will tell the story of her collection via pin, with the help of iPhone photographer Meagan Cignoli and visual storytelling app Steller.

I could be wrong, but I think this is an important new effort from Apple’s editorial team to bring app curation to the masses. More specifically, to a different audience that doesn’t browse the App Store or its Explore section but spends hours organizing boards on Pinterest and checking out pins from other users.

I don’t think that Apple is offloading app discovery entirely to Pinterest, but, unlike Twitter Cards (which support app installs), Pinterest lends itself better to curation and exploration than the fleeting nature of the @AppStore on Twitter.

Curation is intrinsic to Pinterest. The service is based on the metaphor of cards that are highly visual and can contain links, buttons, images, and descriptions – pretty good to preview apps. On iOS, browsing boards is easy and tapping Install opens a modal App Store sheet that doesn’t take the user out of the Pinterest app.

App discovery has been a tricky business for Apple. On the one hand, manual discovery continues to be problematic due to longstanding issues with App Store search and relevancy/freshness of results; on the other, Apple has been making great strides toward discovery via editorial curation with increased efforts on the App Store’s front page, the @AppStore Twitter account, iOS 8’s new Explore view, monthly recaps and sections, and more.

This Pinterest collaboration may fade over time, but, at least in the announcements, I see a few promising similarities with the type of curation found in Beats Music. It’ll be interesting to see if Apple’s plans for influencers, guest-pinners, and themed collections will work, and if the App Store’s Pinterest account will become a source of quality recommendations. I’m curious to see how this expansion plays out and the type of audience it’ll attract.