Last night I wrote about iTunes 10, and Apple’s problem with its flagship media management application becoming a bloat. Feature-creep, that is. The app wasn’t available yet, so I couldn’t give you my thoughts about Ping, Apple’s new attempt at social networking inside iTunes, although I already had some doubts about it. I installed iTunes 10 as it went live and immediately signed up to Ping. 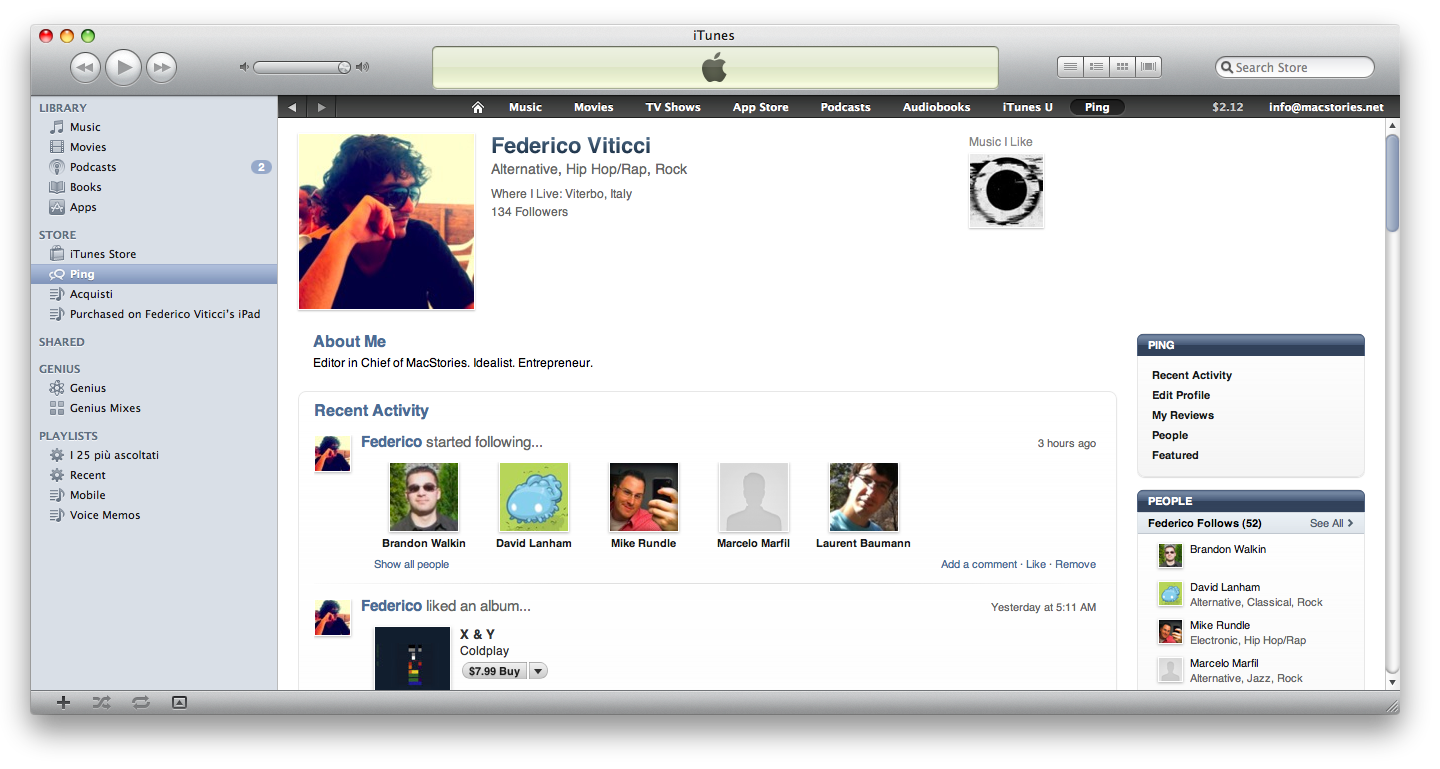 I don’t want to discuss iTunes 10’s UI changes here, even though I really like them. Overall, I think the design team did a good job (except for those vertical buttons). More on this in another post. What I want to focus on here is Ping: it’s useless and incomplete. As it stands now, it looks like Apple tried to copy Facebook and Twitter’s best features (the stream and the following system), blend them together with some usual Cupertino awesomeness, put some typical Last.fm stuff in the mix and pretend that we wouldn’t be disappointed at all. I am disappointed by the first version of Ping. It lacks a purpose, and it doesn’t really add anything to iTunes besides another tab in the toolbar. Looks like a demo to me.

Ping lets you follow people and be followed to share your music tastes with friends. You can comment on other people’s likes and posts, you can post links to albums and songs with a brief comment. That’s it. What’s even worse is that Ping lacks any kind of notification system: I somehow managed to get 134 followers last night, many of them commented on my stuff (or at least, my attempt to post stuff) and I don’t know anything about it. I commented on some people’s “updates”, and they probably don’t know. There’s no navigation: you either open your profile or search for usernames and open other profiles. If you want to check out a posted item you’re brought to the iTunes Store.

I have the feeling Apple did this as a “nice way” to put to use their 160 million iTunes accounts and credit card data. Ping is not a social network at all: it’s a layer above Apple’s purchase system. You just comment on likes and posts, but that’s a trick: actually, you’re playing Apple’s game. You’re commenting on links to iTunes Store items, and if you’re into this thing enough you’re also gonna buy some stuff thanks to Ping. In the end, it’s about the money.

Sure, everything in the end is about the money. Every corporation wants to monetize its efforts and creations to move forward. But at least Facebook is giving us a proper structure and social graph, and Twitter is giving us realtime. You might argue this is Apple’s first attempt at social networking, so I’m not allowed to criticize. Please remember that neither Facebook or Twitter started with a 160 million userbase, and yet they both provided systems way more capable and flexible than Ping. Ping is useless right now and it looks like another lame way to grab some money from the iTunes Store.

I keep saying “is useless right now” because I’m pretty confident Apple is going to improve Ping. I mean, of course they’re going to introduce new features and improve the system. They’ll bring notifications, API and a more complex social graph to Ping. I’m just wondering: how long are users willing to wait for a better Ping to show up?

This might be Apple’s first and last attempt at social networking. Be careful, Steve.