I go through seasons with photography, taking lots of pictures for a period and then hardly any at all for long periods. One of the most extended droughts was in 2018. Walking to and from the train station each weekday and around Chicago when I commuted downtown in 2017 was a catalyst for photography. Sitting at a desk in my home office just isn’t quite as inspiring.

That’s meant having to be more conscious about setting aside time to get out and take photos, which is something I’ve started to do more as 2018 comes to an end. I’ve also begun to explore product photography, which is more technical and challenging than I expected. I’ve done a little here and there for MacStories, but I’d like to do more.

Lightroom CC. To that end, I recently bought a new camera and have been trying out new apps for editing the pictures I take. On the Mac, that’s been Lightroom CC.

I’ve resisted Adobe’s subscription model for a long time primarily because the only options were expensive bundles that make sense for designers and pro photographers, but not someone who dipped in and out of photography periodically. That’s begun to change with more affordable pricing tiers. Also, my wife works at a high school now, which means we can get an even better deal with her educational discount.

Lightroom’s set of photo management and editing tools is robust without being overwhelming. I’m by no means an expert with Lightroom’s tools, but I’ve found it to be a good playground to edit my best iPhone and DSLR shots. I also like that my photos aren’t ingested automatically by Lightroom. I prefer to import them so that only my best shots are stored in Lightroom and Adobe’s Creative Cloud online service.

Pixelmator Pro. Pixelmator Pro has gotten significant updates since its launch right before my last roundup of must-have Mac apps. It became one of my favorite image editors almost immediately. Often, I use Pixelmator Pro for simple tasks like combining multiple screenshots for a story I’m writing, but I also use it for photo editing and more complex layouts. For instance, I found it was the perfect tool for lining up and evenly spacing dozens of app icons for our Club MacStories anniversary member perks in September.

During 2018, probably no bigger change has been made to Pixelmator Pro than the addition of machine learning-based auto-enhancement of photos. It doesn’t work perfectly, but it’s a fantastic start that can be tweaked manually once applied. Pixelmator Pro is also a paid-up-front app, which makes it an excellent choice if you don’t want to commit to a subscription from Adobe.

Retrobatch. Retrobatch is a photo utility from Flying Meat, the maker of image editor Acorn. Retrobatch, as the name suggests, can batch-process photos. The app works a little like Audio Hijack does with audio. You connect nodes of functionality that can run sequentially or in parallel on folders of images. It’s a powerful approach that abstracts away a lot of the complexity. Each node is customizable with different properties that can be adjusted to fit your needs too.

I don’t batch process images often, but Retrobatch was a big time-saver when I was working with those icons for Club MacStories that I mention in the Pixelmator Pro section above. The icons were all different sizes, but with Retrobatch, I created a uniformly-sized set in a matter of seconds.

xScope. xScope from The Iconfactory is another tool that I don’t use every day but is necessary several times per year. The app is a suite of tools for measuring screen distances and inspecting layouts. Every now and then, I find myself doing some sort of layout where the tools in whatever app I’m using aren’t capable of measuring some aspect that I want to get just right. For those times, I always turn to xScope.

I almost bought a new Mac mini when they were announced in October. My MacBook Pro made more sense when I was commuting every day, and with the right specs, I could get a mini that would approach the power of an iMac Pro, but for a lot less money. That purchase might happen eventually, but for now, I’m going to stick with the MacBook Pro.

In the meantime, I still have a late 2014 Mac mini that works perfectly well. I use it for a couple of things. First, it’s my macOS beta testing machine. Over the summer as I worked on my Mojave review, I relocated the mini, which usually sits in the corner of the room, to my desk, installed Mojave and most of the apps I use every day, and made it my primary computer, switching back to the MacBook primarily for recording and editing AppStories.

When the mini isn’t being used for testing though, it runs Time Machine backups, some automation, but most importantly, my Plex server and video library. I have an HDHomeRun Extend that sits in a room on the second floor of my house connected to a TV antenna. The HDHomeRun transcodes the TV signal it receives and transports it across my network to the mini, which serves live TV and recorded shows through Plex.

Screens and Luna Display. My mini runs headless, so I use Screens and a Luna Display dongle and app to access it. When I’m using my MacBook Pro, I access the mini with Screens. My network connection to the mini is usually wired, which helps make the experience incredibly smooth. I also occasionally use Screens to access my Mac when I’m away from home and need to access files on it, but most of the time, I use it to interact with a handful of apps.

The Luna Display helper app that runs on my mini along with its Mini DisplayPort dongle allows me to access the mini from my iPad. I could do that with Screens’ iOS app too, and I do when I’m away from home, but the Luna Display turns my iPad into a second display for my Mac with virtually no lag and the addition of touch controls. It feels like absolute magic and renders the fact that the mini is sitting in the corner of my basement inconsequential.

MakeMKV. I’m tired of having physical disks and the hardware to play them. A couple of months ago I bought a Blu-ray and DVD drive for my mini to copy the remaining movies and TV shows we have on disks to an external hard drive that’s attached to the mini. MakeMKV is one of the homeliest apps I’ve ever used on the Mac, but it does an amazing job decrypting Blu-ray disks.

Handbrake. Handbrake can handle DVDs or MKV files fed to it after decrypting them with MakeMKV. The 2014 mini struggles with transcoding big movie files, but I’m not in a rush. I just pop in a movie when I think of it as I work and am slowly working through our entire collection. 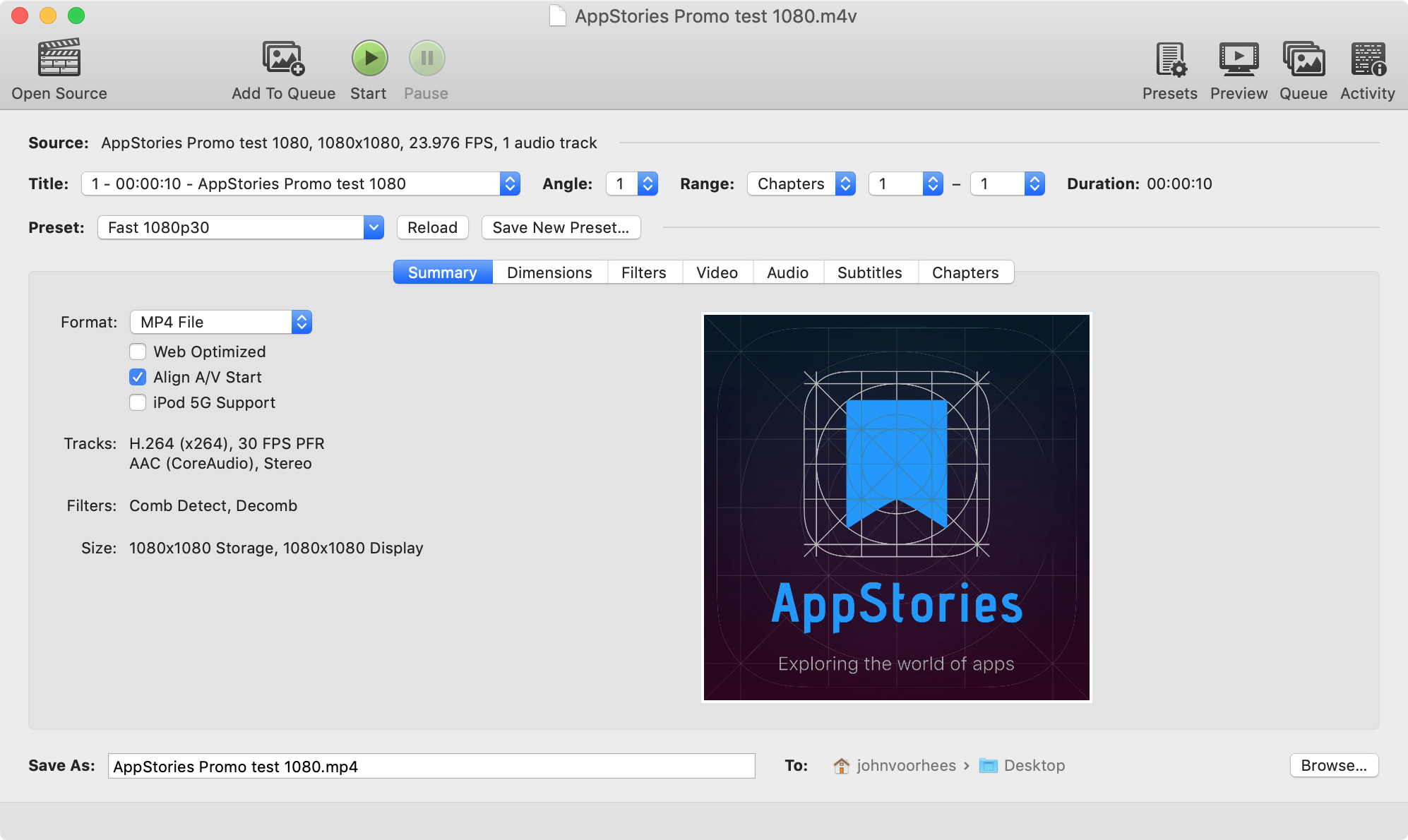 The next step will be to automate the process. I haven’t had time to investigate this yet, but other than inserting a disk, I’d like Handbrake and MakeMKV to do their thing without my intervention.

Plex. Plex runs all of the live TV I’m capturing through the HDHomeRun and movies ripped from disks. Plex can be a little tedious to fiddle with, but it works well with the HDHomeRun and plays nice with apps like Channels and Infuse on the Apple TV, which I prefer as alternatives or front ends to Plex. One feature of Plex I like a lot is the ability to watch live TV when I’m not on my home network. Hulu and other services limit how long you can do this, so an antenna is a nice alternative to those services for some shows.