Six years ago I was a senior in high school – a laughably short timeline compared to the immensity of growth and change which took place within it. Graduation, all of college, and a lonely move across the country; a career imagined, pursued, and achieved; friends and relationships come and gone. Not many threads of life make it all the way from the start of your late teens through the end of your early twenties, but those that do feel special in a way not much else can. MacStories is one of mine.

This week we’re celebrating MacStories’ 10th anniversary, and this year marked the fifth anniversary of my first article on the site. It boggles my mind to think that I’ve been part of this incredible team for more than half of MacStories’ life, but that’s nothing compared to the feeling of when it all began.

My first hook in the Apple blogging world was through the Macworld app on my iPad 2 sometime during my sophomore year of high school. I quickly added Daring Fireball and The Loop, and not long after that I started reading MacStories. I was definitely on to MacStories before June 2011 because I remember relishing the classic Daring Fireball piece On Attribution and Credit (and its equally classic more colorful precursor). In these articles John Gruber was calling out what MacStories readers already knew: MacStories wasn’t just some “Apple enthusiast site,” it was a legitimate publication covering Apple in a new way.

MacStories was one of the first blogs to really cover iOS as a serious platform for productivity. Federico saw a potential in the iPad at a time when the idea that “real work is only done on a Mac” was essentially unchallenged. As a high school student who owned an iPad but not a Mac, this resonated strongly with me. I had an interest in coding which was difficult to realize without owning a device with a terminal, but that unfed interest is exactly what pulled me into the fledgling field of iOS automation.

Comparing modern day iOS automation with that of 2013 is like comparing a car to a horse. We were years away from Shortcuts, and more than a year away from extensions and Workflow. There was only a single avenue of inter-app communication which could slip through the sandbox walls: URL schemes.

URL schemes were created to enable deep-linking in iOS apps. They worked extremely similarly to the standard web URL: an app would register a “domain name” which would launch it, and then could support parameters which directed the app to take a user to a particular place within it (or execute some action). A lot of apps supported basic launcher URL schemes, but it was Greg Pierce’s Drafts which really drove things forward. Drafts could be launched with the URL scheme drafts://, and then actions could be triggered by adding parameters to the URL. On top of those basics, Pierce invented the x-callback-url protocol, which apps could adopt in order to support a second level of automation called a “callback.” A callback meant that once an app successfully executed the action that the URL called for, it would then immediately trigger another URL.

This isn’t the place to go deep on a somewhat (although not entirely!) outdated automation paradigm, but suffice it to say that URL schemes and x-callback-url were a very rudimentary form of programming. My interests were piqued immediately, and the fire was fueled as Federico continued to cover the burgeoning possibilities on MacStories. These were the pioneering days of inter-app automation on iOS.

In February 2013, Federico posted an article about chaining three apps together with Drafts and x-callback-url. At the end he theorized that even more apps could be linked together using a similar approach to his. I took that as a challenge, and within a couple days I had chained five (gasp!) apps together. I tweeted that to Federico1, and he wrote an article about it on MacStories.

As a 17-year-old with no website and maybe 50 followers on Twitter, seeing my name on MacStories pretty much blew my mind. That day I realized I needed to have my own site to publish on so that I wasn’t just tweeting Dropbox links, and five days later The Axx was born2. 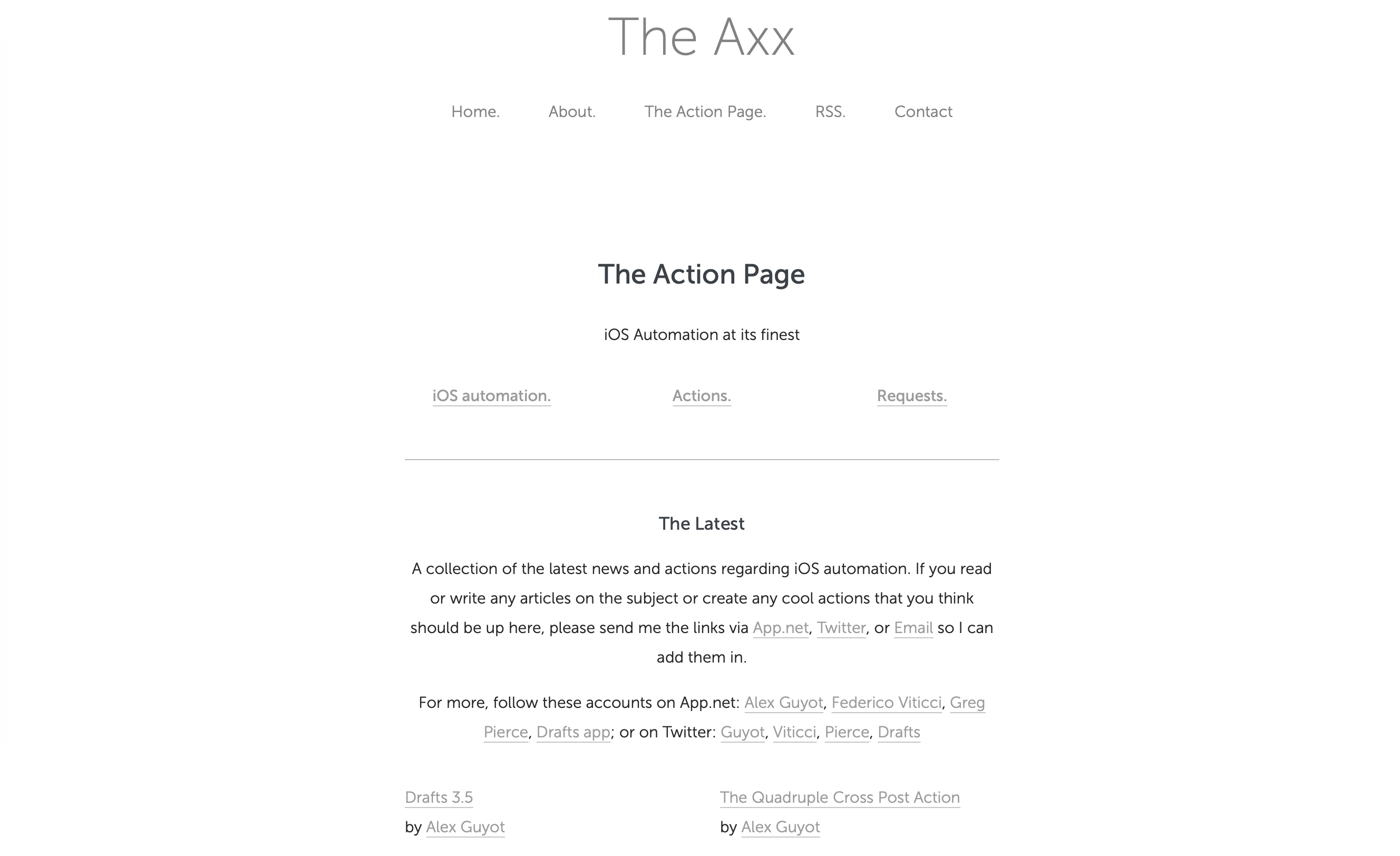 On The Axx I created The Action Page to document my URL scheme automations. A lot of them were pretty useful at the time, like cross posting between Twitter and App.net3. Others were just proofs of concept, or downright convoluted. On MacStories, Federico had just released his Editorial review, and I decided that Drafts needed a resource like that: a centralized place to learn how to use URL schemes and Drafts to link iOS apps together.

When my plans came across Federico’s radar4 he reached out to ask if I’d be interested in publishing the article on MacStories instead. A few months later I posted my first ever article to the site: 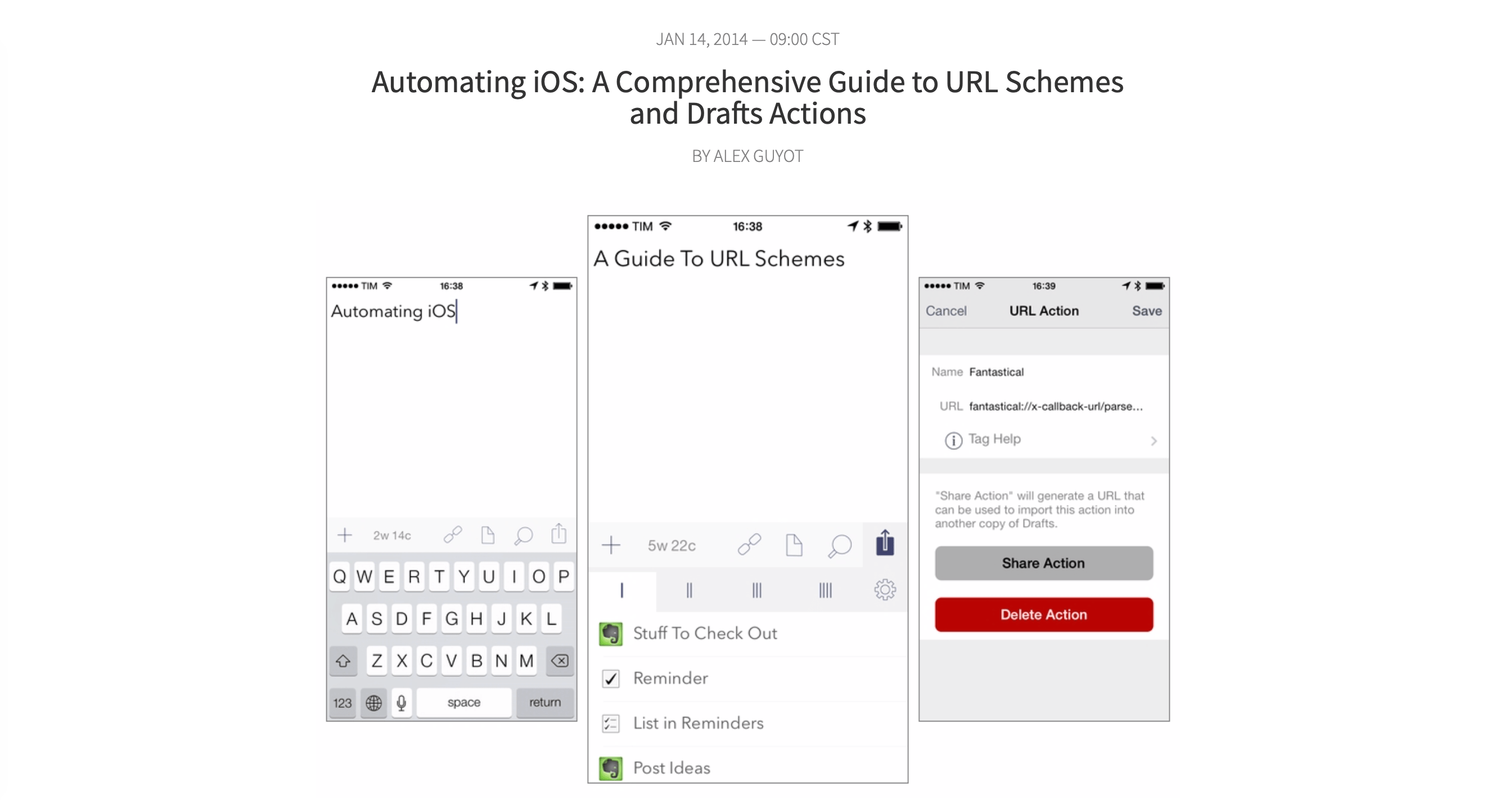 Since publishing that article, I’ve had the pleasure of being part of the MacStories team for over five years now. That lead up to it was one of the most exciting and special times in my life, and one of the most impactful. The primitive programming of URL schemes inspired me to choose software engineering as a career, and my work at MacStories was my primary reference to get my college job in support for the home automation company SmartThings. SmartThings hired me to their cloud engineering staff out of college, a position which I moved across the country for and continue to be employed in to this day. I’m not sure where I’d be today if Federico hadn’t been so fascinated by iOS automation, or if he hadn’t given me a spot on the MacStories team.

Being part of that team has been and continues to be one of the great experiences of my life. We have an extraordinary team here, and everyone on it cares deeply about the special place that we’re working to build. My annual watchOS reviews are some of my proudest work of anything I’ve ever done, and covering Apple events throughout the year has become a tradition that I love and look forward to despite the hard work that it entails.

Life hasn’t slowed down since that last year of high school, and a lot of my side projects have fallen by the wayside over the years. I haven’t been able to write for MacStories as much as I’d like to, but I’ve always made sure to keep my byline active at least a handful of times each year. This team of people is not something that I ever want to leave behind.

Here’s to the next ten years.