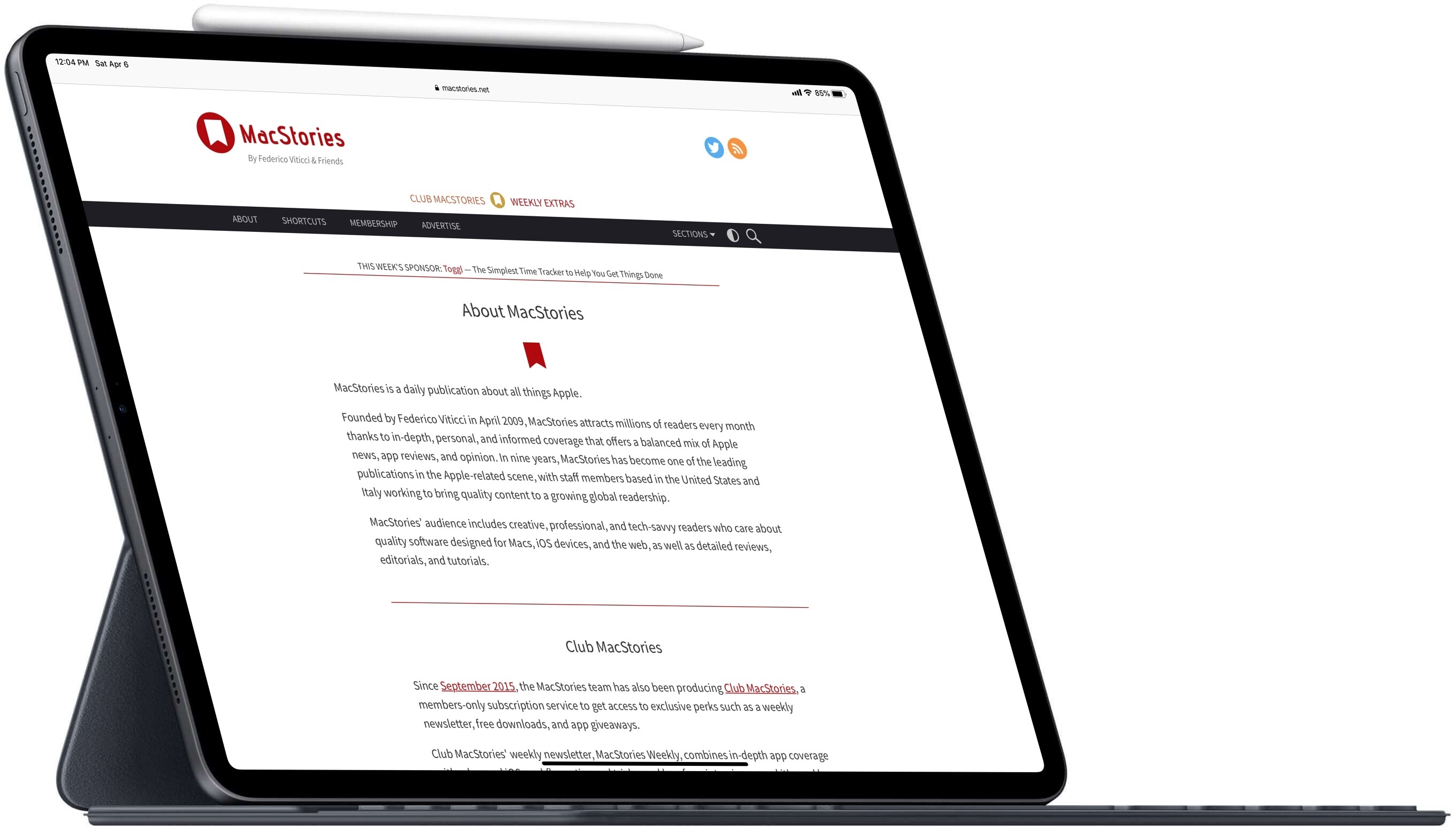 When I started reading MacStories, the site had already shifted its focus from the Mac to the iPad – and that’s what drew me in.

I’ve been an Apple admirer for as long as I can remember, but in my younger years the company’s products were simply outside my budget. It wasn’t until the age of 18 that I owned my first Apple device, an iPod, which was followed a couple years later by a second-hand MacBook. In both of these cases, it was the surprisingly short lifespans of my previous non-Apple MP3 player and laptop that led me to finally splurge and pay the Apple premium. I quickly discovered that, for me at least, it was well worth it.

Despite loving my iPod and MacBook, I didn’t start diving deeper into the Apple ecosystem until after the iPad’s release in 2010. At that point the iPhone had been around for a few years, but in frugality I had stuck with a cheap flip phone and evaded the smartphone era as long as I could. After the iPad, though, things quickly changed.

Shortly following the launch of Apple’s tablet, my boss at the time purchased that very first iPad for me, which was the gateway that led to an iPhone 4 later that year, a MacBook Pro the year after that, and many more Apple products since then. The iPad catalyzed my deepening interest in Apple, and it was the iPad that also, several years later, led to my discovery of MacStories.

From 2010 on, the iPad was a regular part of my life and work, as evidenced by how often I bought a new one: I moved from the original iPad to the iPad 2, then the iPad 3, iPad mini, and by mid-2015 I had settled on the iPad mini 2. I used the device primarily for taking notes, for reading, holding reference points during meetings, and a few other things that tablets are uniquely best at. I never considered making the iPad my primary computer, but it was a great complementary device to my Mac and iPhone.

Then I heard about Federico Viticci.

I began listening to Connected in 2015, where Federico regularly made reference to using the iPad as his primary computer. Exposure to that concept naturally led to my discovery of MacStories, and Federico’s written work on the subject. I devoured all the stories I could find in which he documented his iPad journey, and much of his iPad affinity resonated with me. 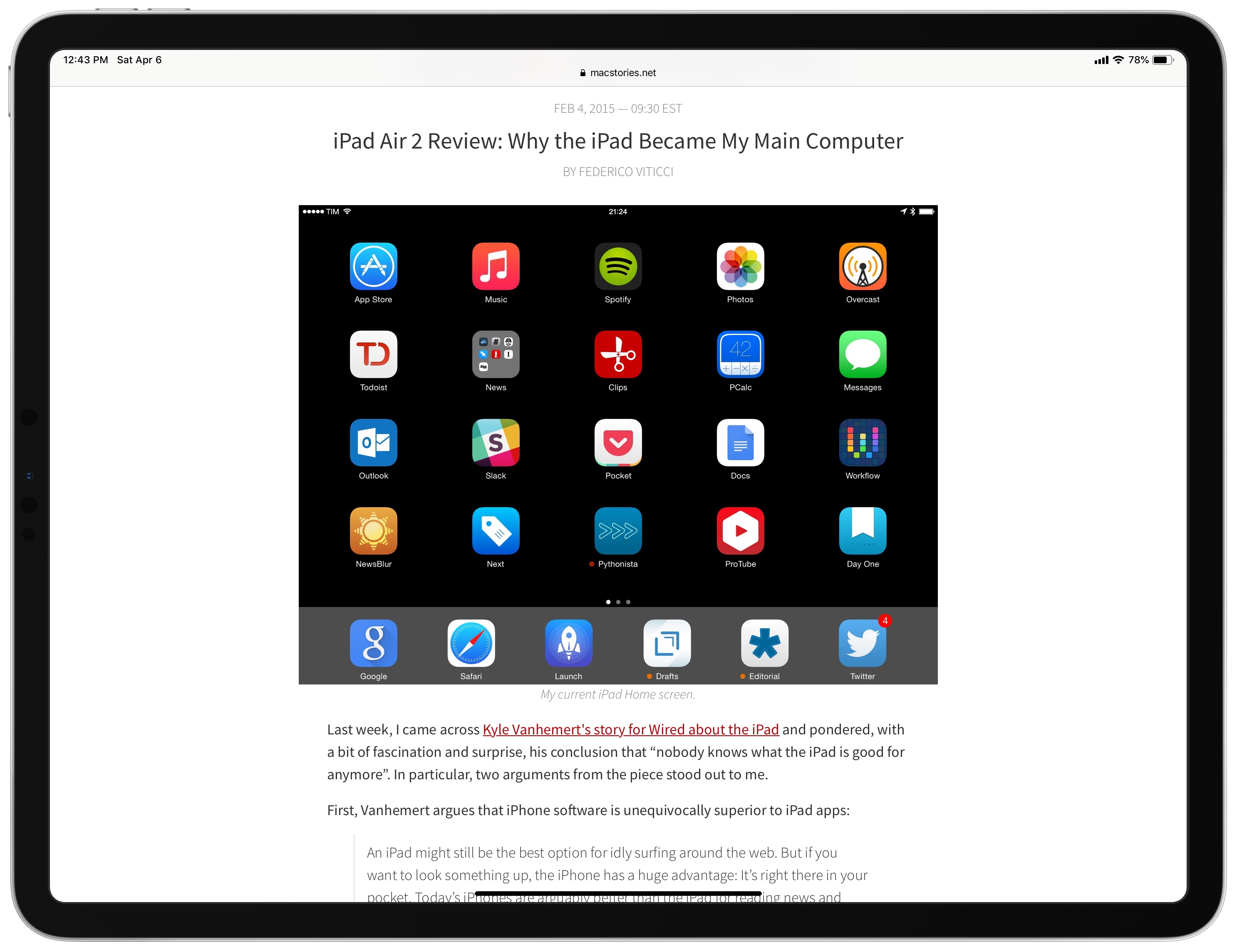 My primary frustrations with the Mac at that time were twofold. First, I noticed myself feeling scatterbrained and distracted when I used it; I was intrigued by the prospect of the iPad providing a more focused environment for work than my Mac, where I would constantly have multiple windows on-screen. I could have willfully limited myself to one or two apps at a time on the Mac, but the iPad offered the benefit of being designed from birth for such limitations. Though today I occasionally wish the iPad’s multitasking capabilities were more robust, for the most part I’ve ended up loving the device’s simplicity.

The second, more significant reason for considering leaving the Mac behind is that I felt the Mac platform had long been neglected by Apple as iOS and the iPhone received the company’s prime attention. Though the iPad may not have been Apple’s priority either, it at least benefited from sharing the same OS and much of the same technology as its smaller sibling. Features like Touch ID, display advancements like Retina and True Tone, and of course new iOS features served to improve both the iPhone and iPad; the iPad also had a much more vibrant third-party app market than the Mac in 2015, which was important to me.

These factors, combined with seeing Federico’s successful venture with the iPad, ultimately led me to adopt the iPad-first lifestyle – I sold my MacBook Air and bought the first iPad Pro on release day. 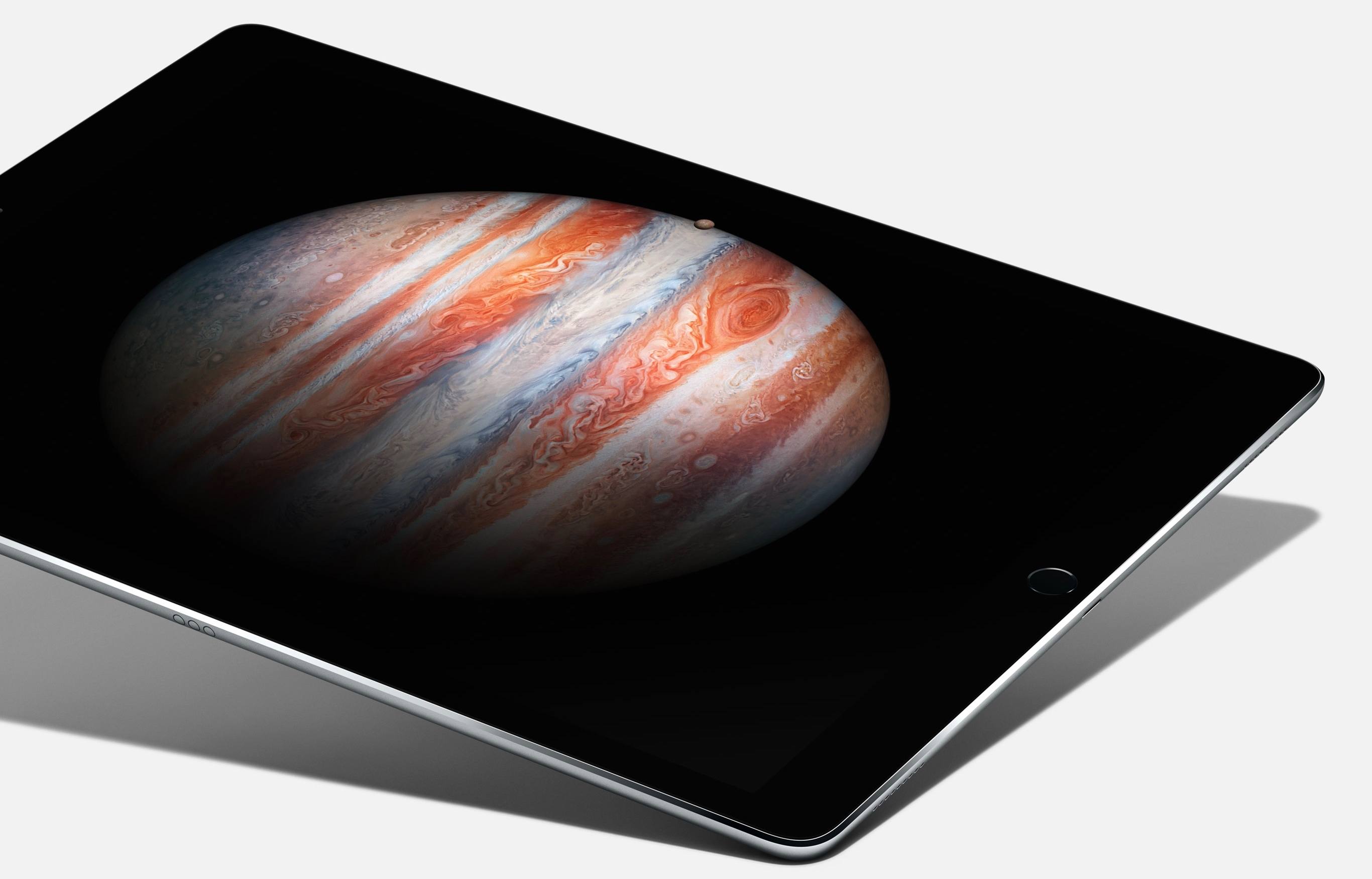 Despite Apple’s own positioning of the iPad Pro as a different kind of iPad, I don’t think I would have given the device a shot if it weren’t for Federico. His example on MacStories and Connected provided a real-life case study proving that iPad-first computing could not only work, but it could be a great thing. If I had never encountered that example, I may still be using a Mac as my primary computer today, content with the iPad as a mere tablet for tablet-y tasks.

My following of MacStories for its iPad coverage went hand-in-hand with another strength of the site that drew me in: the MacStories team’s approach to covering apps. I was impressed by how rich with detail so many MacStories reviews were. When Federico wrote about 2Do or Tweetbot 4, thanks to his in-depth analysis and plethora of screenshots, I gained a real sense for whether those apps would work well for me or not – and that practical benefit remained a consistent attribute of everything I read on MacStories. The site not only covered the basics about apps, it dove into the finer details that developers had crafted with care – details that matter a lot to me personally. Despite how vast the Internet is, and how big a market apps are on Apple platforms, it was hard to find another site with the same type of coverage as MacStories.

In 2016 when I started exploring turning my hobby of Apple interest into paid work, MacStories was the first and only site I reached out to. Federico graciously gave me the opportunity to join the team, and going on three years later, it’s a privilege getting to celebrate MacStories’ tenth anniversary as not only a reader, but also a part of the site’s on-going story.