Apple has on three seperate occasions announced that the iPhone 5 will have the fastest international rollout of any iPhone ever - at the announcement keynote, during the Q4 earnings call, and in their press release announcing opening weekend sales of the iPhone 5 in China. The claim was, no doubt, meant to impress investors, press and the general public, but I was curious as to how fast it really was compared to previous iPhone rollouts. So I decided to track down the launch schedules of all the iPhones to date and then again with the iPad. In the end I found a few trends, some oddities and that Apple’s claim was (mostly) true.

iPhone 5 will be available in more than 100 countries by the end of December, making it the fastest iPhone rollout ever.

My original goal was to track when every single country got each of the iPhone models, but it was simply impossible to track that much information down. I scaled back and decided to track down data for the first one hundred days of each iPhone and iPad - this proved much more attainable. My research started by looking back at Apple’s official press releases which often detail which countries are included in iPhone and iPad launch rollouts. However, Apple only does this for major “waves” of the international rollout, leaving massive holes in the timeline - to fill those in I fired up Google and tracked down news articles, blog posts and Wikipedia articles that detailed availability in other countries within the first 100 days. Thanks in particular to the following websites:

By and large I believe I have tracked down the accurate data for when the international rollouts occurred, but there are two exceptions in which I just couldn’t find enough data:

A note on interpreting the timeline
“Day 0” as shown on the graph is the day Apple held their keynote introducing the product, so you’ll see the lines start a number of days later. This seemed the fairest method to use, given some products arrived in more countries because they took much longer to launch (see the iPhone 3G as the clearest example). 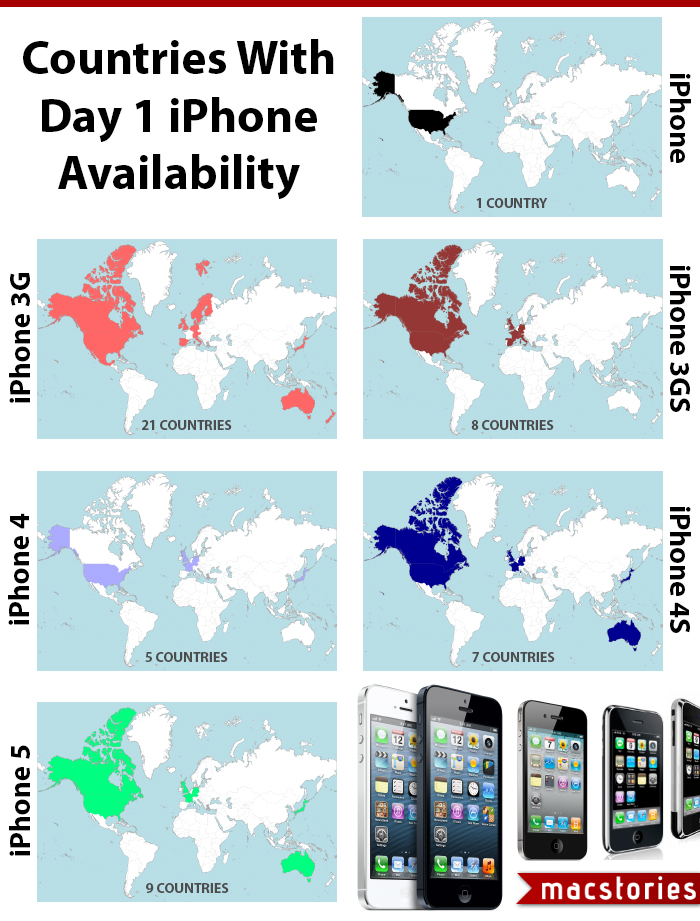 Initial Availability
Focusing first on inital device availability, the real oddity is that the iPhone 3G had the biggest international availability at 21 countries. But that big day one bang came at the cost of a greatly delayed launch - 32 days after it was announced. The subsequent year Apple drastically cut back the time to launch (11 days) and went with a smaller group of countries for the initial availability. Also of note is the iPhone 4’s initial launch which was also quite delayed at 17 days after the announcement and only had 5 launch countries. Jumping to the iPhone 5, its launch day saw the device arrive in nine countries (second to the 3G’s 21) only nine days after the announcement. 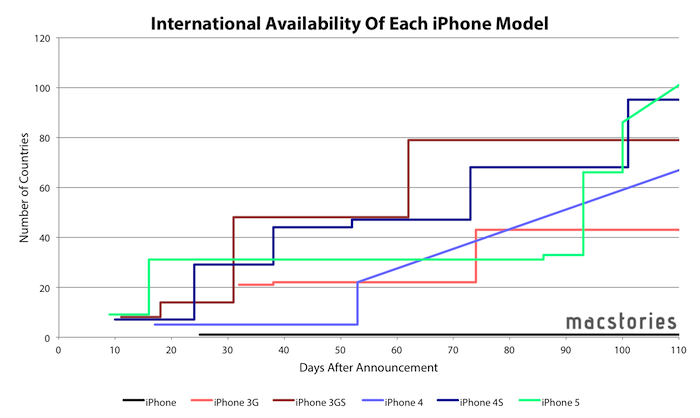 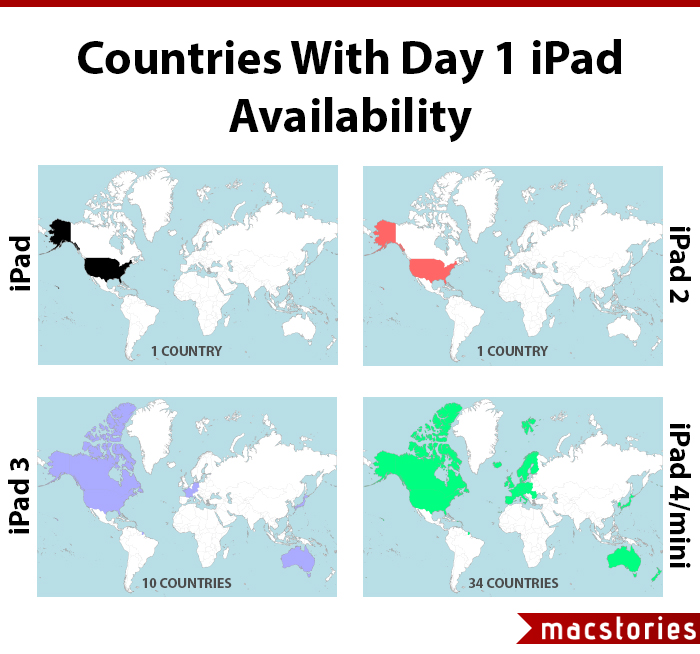 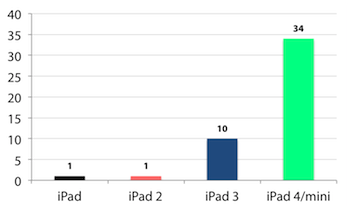 Both the initial iPad and the iPad 2 were only available in the US on day one (although the iPad 2 arrived much quicker) and the 3rd generation iPad launched in 10 countries. But the real surprise is the iPad mini and 4th generation iPad which launched in an incredible 34 countries just 10 days after the announcement. That’s easily the biggest number of countries getting an iOS device on day one - solidly besting the old record of the iPhone 3G which was available in 21 countries (and that took 32 days to launch). 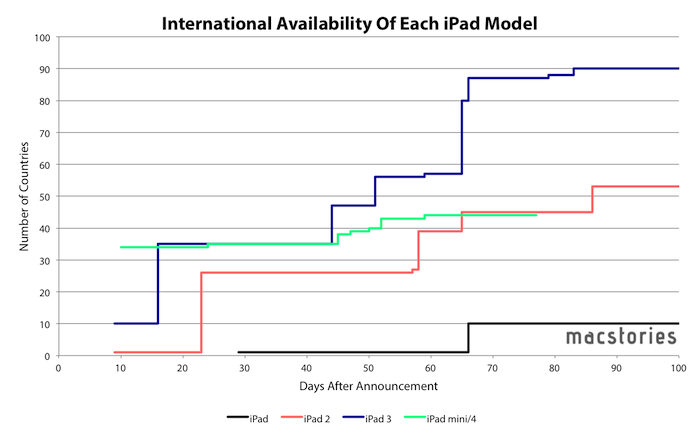 Well, yes and no. If you look at the iPhone rollout graph above, you’ll see that the lime green line is the highest for a short period at the start and then right at the end when it jumps up above the 4S. So it really depends what time frame you’re looking at: if it’s the first month or first 110 days, then yes, it’s true. But if you specify the time period to be the first 70 days then it’s actually the 3GS that had the fastest rollout with 79 countries whilst the iPhone 5 is in a measly 31 countries.

Expect device availability 9 or 10 days after the keynote

The last two iPhones and last 3 iPads all become available 9 or 10 days after Apple held its keynote - and all on a Friday. So if you know the keynote date, you can bet with reasonable confidence that the new device will go on sale on the following week’s Friday.

If you want to get all the data I collated, I’ve decided to upload the Excel file which includes all my working out, charts and also includes which countries were included in each of the launch waves. You can download it here.