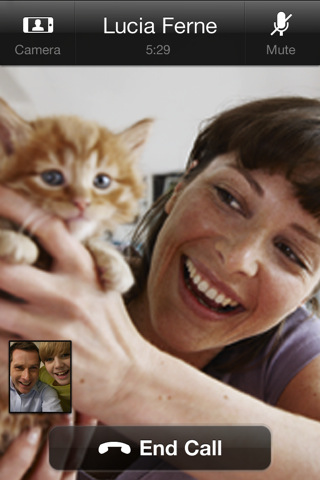 Last night, Skype released a major new version of their iPhone and iPod touch client. Version 3.0 of the Skype app, released just in time for New Year’s Eve, adds video calling to all iOS devices with the possibility to run the app in compatibility mode on the iPad and receive video calls on screen. The iPhone app allows you to receive and initiate video calls both on WiFi and 3G, it’s compatible with iPhone 4 / iPhone 3GS and iPod touch 4th gen and, when on 3G, consumes around 3.4 MB of data per minute. Previous tests showed that Apple’s FaceTime technology also consume 3 MB per minute. Skype 3.0 also lets you call desktop users on Mac and PC and check on their computer screens (sounds useful for remote troubleshooting or networking), requires iOS 4 and supports both portrait and landscape modes.

The latest Skype update is, put simply, a huge win for the millions of Skype users out there who have an iOS device always connected to the internet. We could argue on the 24/7 internet availability on devices like the iPod touch and the iPad WiFi, but there’s no doubt the new Skype for iOS is the closest thing Apple ever had to a FaceTime competitor. Forget the 3rd party apps in the App Store that allow video calls: this is Skype. Which leads me to consider Apple’s position in regards to this update: Skype lets you see your friends wherever you are, no matter what kind of connection you’re on. Apple, due to technology limitations or AT&T’s pressure, only lets you FaceTime on WiFi. But looking at the big picture, that’s not really what Apple should fear.

The problem is, Skype has a userbase. Millions of users with address books and contacts lists ready to be tested with mobile video calling. Even if Apple’s FaceTime runs on iOS and OS X and it’s installed by default on every mobile device, they have no way to aggregate their users. Well, unless you add a person to your own Address Book. Which is similar to adding someone on Skype, with the exception that Skype’s address book can do other stuff besides keeping phone numbers. In Skype, you can check on your contacts’ online status, chat, share files…In Apple’s Address Book, you can only save contact information and that’s about it. When you try to FaceTime with someone, you have to hope he’s online or at least running an active internet connection. There’s no way to see if your friends who have FaceTime are online. There’s no way to see who, among your friends, has FaceTime, actually – unless you previously had a video call with him. Not to mention the lack of chat, file sharing or status updating features.

The funny thing is Skype is closer to the integrated model than Apple ever was as long as online communication is concerned. That’s why Skype 3.0 for iOS is such a big deal: it brings chat, address book, video calls, file sharing and status updating in a single place. Which, by the way, happens to be interoperable with desktop computers.

I’m not saying Apple should turn the address book that’s built in every iOS device and Mac into a Skype-like service. But I do know that by entering the video calling segment of mobile computing with the iPhone 4, they set out to replace what iPhone users were previously relying on for their video calling needs. Typical Apple scenario: two iPhone 4 users want to see each other in a video call. They know each other well, they have each other’s info in their address books. What are they going to use, Skype or FaceTime? People like my mom and dad – are they going to log into Skype, check on available contacts and initiate a video call or tap on the camera button in the phone app? For the average user, and Apple knows this, FaceTime is appealing because of its simplicity. It’s the “it just works” thing all over again.

I believe it is about infrastructure and context. Skype has the best system right now, with lots of options, 3G capabilities and a nicely designed app. Apple has the chance to win on context, with a simple system that can be just fine for the millions of iOS users. Another problem arises, though: will these average users eventually grow tired of Apple’s restrictions and become interested in Skype’s mobile offering? And if so, how long is that going to take?

Putting all the available options on the table, the big picture is easy to understand: Apple is Apple and Skype does everything else. Apple will iterate like it always does, Skype is already delivering on their promise of bringing video calls to everyone.

Apple’s biggest problem is not the Skype app by itself, it’s that Skype seems to like integration a lot.