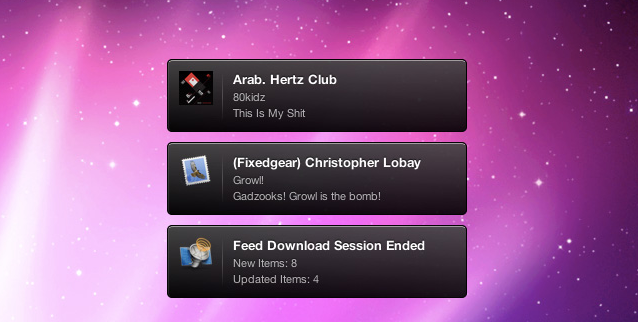 The developers of Growl, a popular notification system for OS X that’s been around for years and it’s completely free to use, have announced that the plugin is going to become a Mac App Store application through a complete rewrite with OS X Lion in mind, dropping support for older frameworks and “hacks” like GrowlMail and GrowlSafari that wouldn’t probably make it past Apple’s approval. For those not familiar with Growl, the notification system became popular among Mac users because of its highly customizable nature that enabled almost anyone with basic coding and design knowledge to create “themes” for it that changed the appearance and animations of the notification tickets displayed on screen. Growl is supported by hundreds of different applications for the Mac, including big names like Twitter and Dropbox. We have covered a handful of beautiful themes for Growl in the past, and the success of this plugin also inspired several iOS developers to create mobile apps capable of plugging into the desktop system to fetch or send remote notifications. Growl is the undiscussed king of notifications for OS X apps.

Yet the developers are willing to change everything about Growl to get it ready for the Mac App Store and turn it into an app as requested by Apple to developers submitting software to iTunes. In a post on Growl’s official Google Group [via Steve Streza], developer Christopher Forsythe has announced that the upcoming 1.3 release will bring important changes such as the aforementioned Store availability, as well as full support for Lion and a new “app” form that has the obvious advantage of allowing users to easily upgrade to new versions by simply checking on their Mac App Store purchase page. One of the common complaints about Growl, in fact, is that the app often requires the user to download and perform an upgrade. As the existing version comes with a .DMG file that contains an installer for a System Preferences panel, the current Growl 1.2.2 forces users to manually upgrade every time a new version is out. With the Mac App Store and Growl becoming “an app”, the developers want to eliminate the convoluted process of opening and mounting a disk image file, running an installer, and manually upgrading from System Preferences.

It is unclear at this point how “Growl as an app” will work with its settings, third-party app integration and themes (will the devs find a way to make the app theme-able?), but the team seems to be betting heavily on the future of Growl as a regular app available on the Mac App Store, a trend that’s growing stronger among app makers who are seeing the same explosion in popularity – and overall deeper user satisfaction – the iPhone App Store saw in 2008 when it launched, as also confirmed by Apple’s Phil Schiller on stage at the WWDC 2011.

Growl is going to be put into the Mac App Store. There are multiple reasons for this:

- This will make distribution much easier for us. One of the biggest complaints that I am seeing on Twitter is people complaining about updating.

Growl will become an application. This fits into the MAS rules more than anything else we’re doing.

*Do not expect any further releases of GrowlMail or GrowlSafari*. This is only in bold so that it’s easier to see. This should not be unexpected to those who use GrowlMail already, since most of you know that it breaks with every Apple Mail update. That is simply not something we wish to keep up with. Going to the Mac App Store for distribution seals the fate of anything considered more or less a “hack”.

Forsythe says they’re looking for more developers, too, and that these aren’t the only changes coming to Growl 1.3. From a user’s perspective, it makes sense to have Growl available as an app on the Mac App Store: updates will be easy to perform and Growl will sit alongside any other software you’ve purchased using your Apple ID. Our only concern is that Apple’s rules could somehow limit Growl’s existing customization and tweaking options, forcing the devs to cut “power user features” to make room for the average user and a notification system that can be sold on the Mac App Store. But then again, we’re just speculating here and there’s the high chance Growl will keep working as it does now, only in a new app form, through the Store.

Furthermore, it’ll be interesting to see if the Mac App Store release of Growl will push the developers of Boxcar (another notification system for OS X and iOS, based on social services and email with a strong online component) to unleash their tool on the Store as well. Boxcar and Growl are ultimately different (Growl aims at integrating with local apps, Boxcar fetches data from the web), but Boxcar (currently in beta on the Mac and insanely popular on iOS) uses Growl notifications, too. Also worth noting is that OS X Lion will allow developers to enable push notifications for desktop apps, though examples of such a technology haven’t been demoed yet. In what sounds like a major inspiration from iOS, Apple writes on the developer’s website that “if you are designing a sports app, you can notify users of key game updates” or “if your app manages tasks, you can show the number of tasks a user has to complete”. With this in mind, developers could have a choice to support both Growl (when installed), or Apple’s standard notification system for all users.

In the meantime, you can download Growl 1.2.2 from the official website. We’ll keep you posted on the release of Growl 1.3 which, we assume, should happen in the next few months after the public release of Lion. [image via]