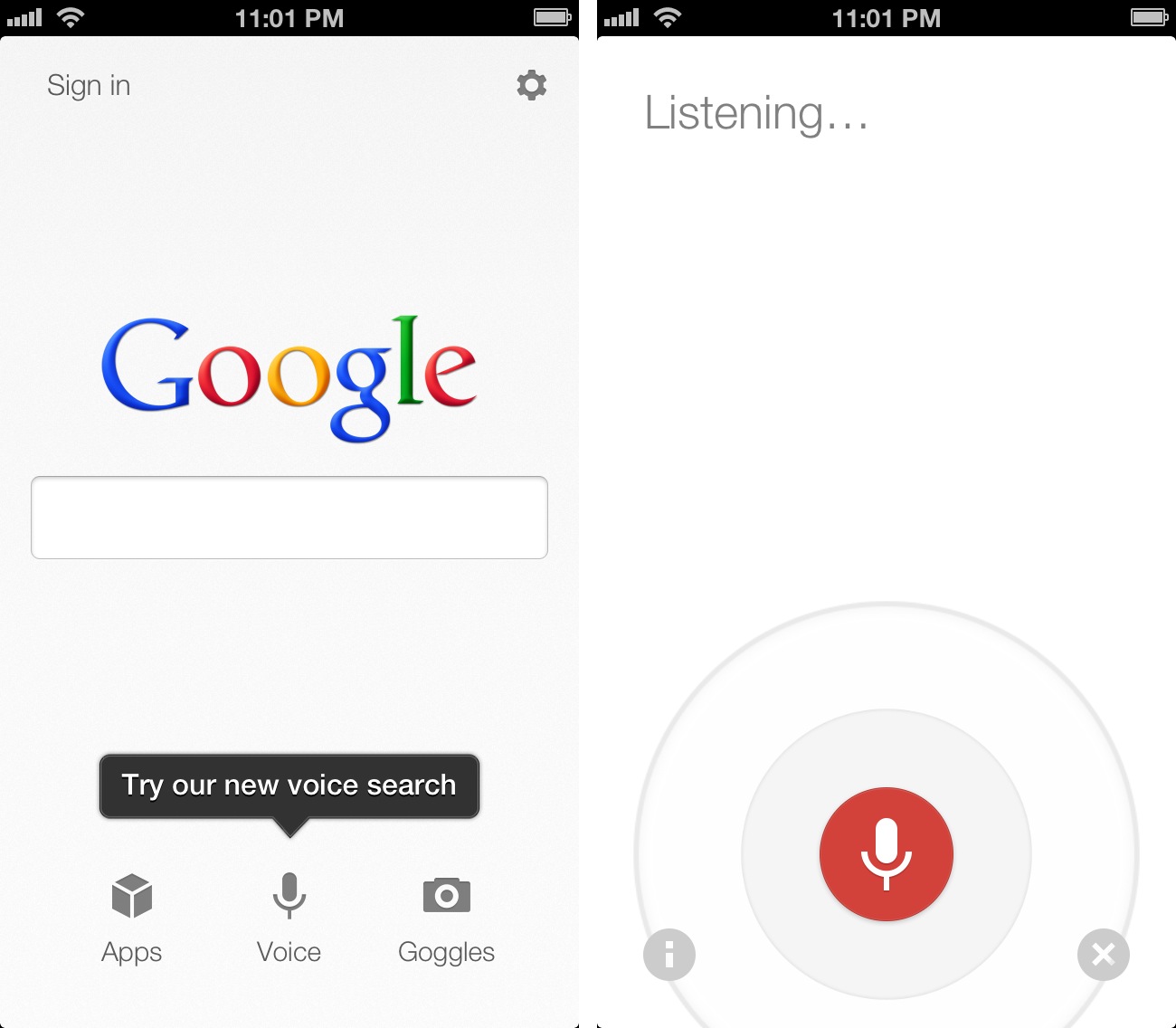 Earlier today, Google released an update to its Search app for iOS (a longtime favorite of mine both on the iPhone and iPad) to include an “Improved Voice Search” experience. Apparently, the app had been submitted a while ago, but Apple approved it this week.

The new Voice Search of the app may seem Siri-like in terms of overall concept. Essentially, it allows you to ask questions in natural language without typing, and get results back. I took some time to test the app, and, in actual usage, the scope is considerably different from Apple’s Siri, at least for now. And, at the same time, the technology behind it is much different.

Firstly, while a bunch of languages are supported (check the Settings of the app), the ask-and-get-spoken-results feature is only supported for English speakers, as Google notes in its Help pages. In fact, for Italian, Google uses the old Voice Search workflow to get results for your spoken queries. However, they are also relying on a new voice recognition technology to get your words translated on the fly – but more on this in a bit.

The real potential of the app is unveiled when you use it in English. Based on the Knowledge Graph, results that Google thinks it can provide a useful spoken answer for will be passed to the built-in “robotic voice”, which in my tests sounded a tad more “natural” than Siri. These are the kinds of results that Google is already showing “inline” with search results, such as weather forecasts, directions, word definitions, Wikipedia excerpts, math calculcations, and so forth. The “widgets” have been optimized for mobile view, and they are embedded directly in the search results; Google Search 2.5 will speak only the most useful portion of these Knowdlege Graph-based results. For example, if you ask for weather conditions in a specific location, Google will bring up a 7-day sheet, but the Voice Search will only speak the first-day result. Similarly, the app will only read the first line of a Wikipedia excerpt, or the first definition for a word. As long as you use English, you can also ask for results pertinent to your location, as I did for Viterbo. 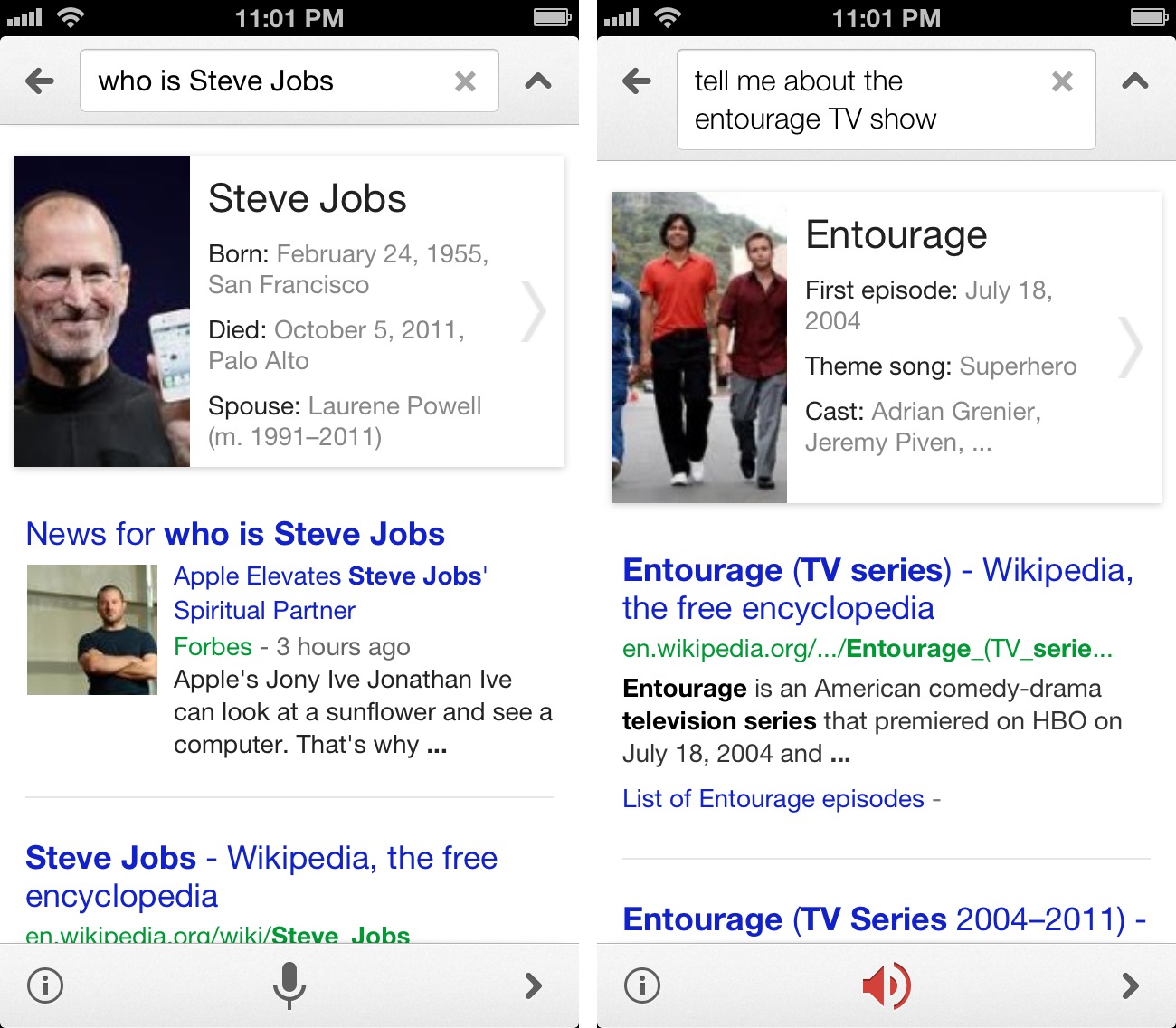 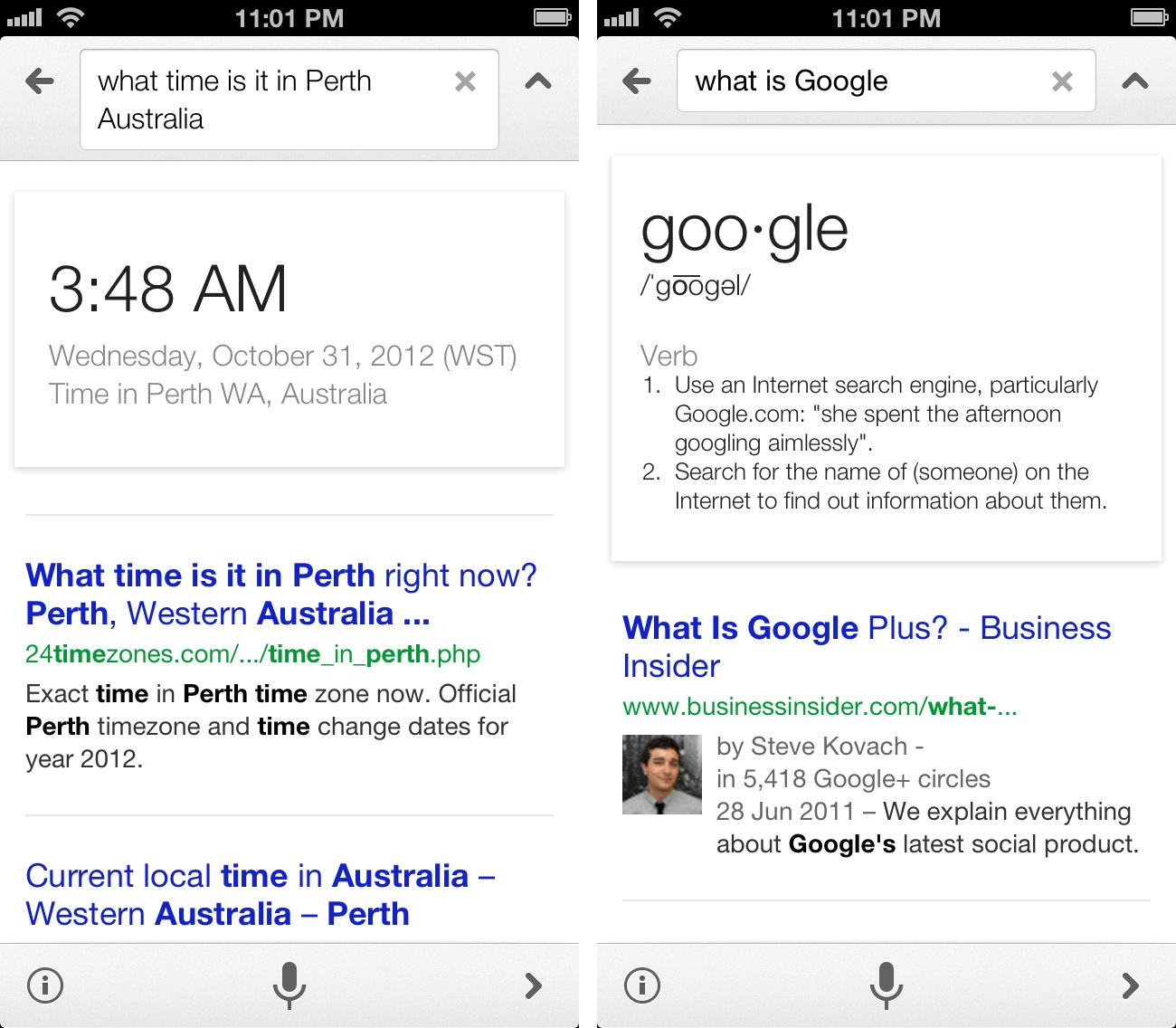 Interestingly enough, asking for directions (“to” or “from and to” a specific location) shows a (non-Retina) embedded Google Maps preview that, when tapped, still asks you if you want to open the “Maps application”. Tapping on it will launch the Google Maps website, which was recently enhanced for mobile users. 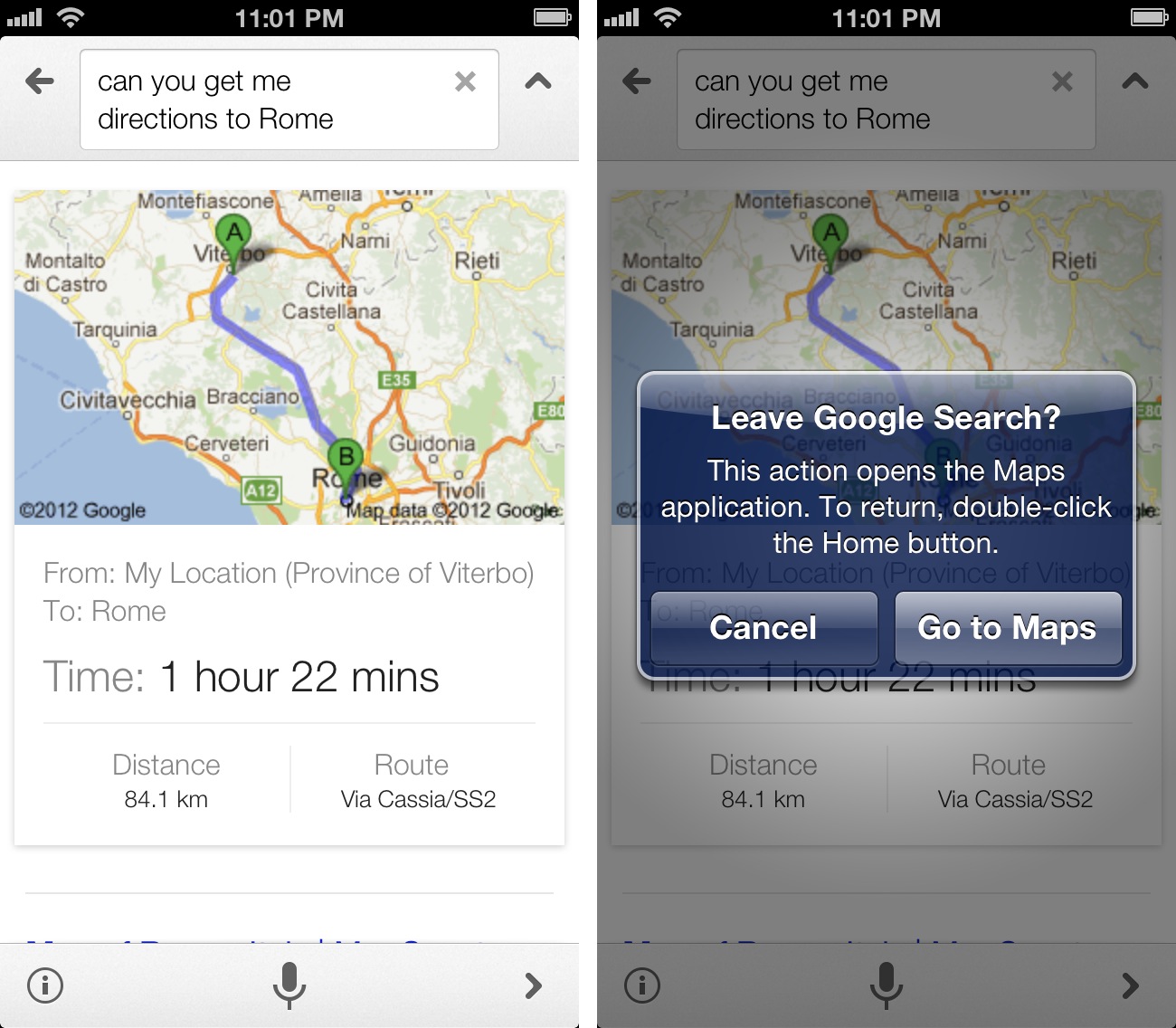 As I’ve posted on Twitter, the new Google Search app does have a sense of humor. It recognizes funny questions such as “sing me a song” or “what’s your name”, but, overall, it doesn’t have the same amount of “witty responses” as Siri does. After playing around with the app, I’m under the impression that Google built in some Easter eggs similar to Siri’s ones, but the overall focus of the app is on Search, and voice is just a new interface for that. I wouldn’t even be surprised if this “best Android phone” screenshot is actually just the result of targeted advertising from Apple. 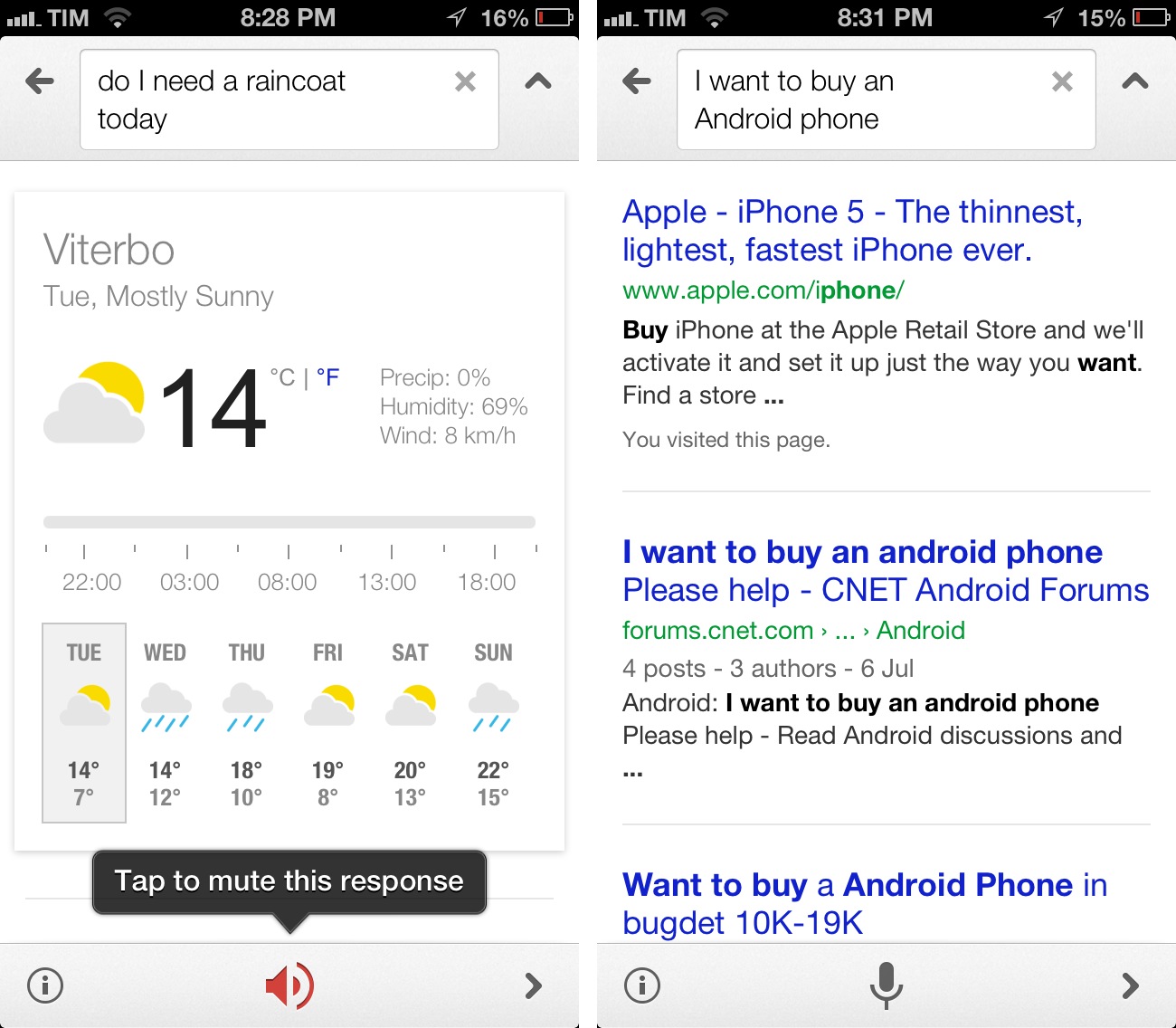 Google Search for iOS doesn’t want to be Siri: after all, it can’t. It has some similar features (“Do I need a raincoat today?”), but it’s not an assistant. It couldn’t be per Apple’s restrictions, and Google isn’t even trying to posit it as a Siri replacement. It’s Voice Search.

It is inevitable, however, to compare some areas of Google Search with Siri on the iPhone. Barring the obvious technical differences (understanding conversations and context vs. getting search results from Google), I came away impressed with the speed of Google Voice Search. It is fast. But more importantly, it’s fast at transcribing the words you speak on screen: both in Italian and English, spoken words are transcribed on screen nearly at as-you-speak speed. It’s quite impressive, but there are a couple of tricks. First, Voice Search appears faster than Apple’s dictation/Siri because, on iOS, you don’t “see” words: you just speak and the software processes the query. Siri and Dictation might as well be as fast as Google Voice Search at transcribing voice queries, but we don’t know because the interface is different.

Second, it seems like Google is using some sort of “voice autocompletion” to guess the best query for what you’re asking. In trying the app, for instance, I asked “what is Goo…” and the app assumed I was asking “what is Google”. In Italian, I asked “meteo a Fire…” and the app returned “meteo a Firenze” (weather in Florence). You can try this by truncating words and see how Google autocompletes them in Voice Search. I don’t know (obviously) what kind of algorithm Google is using here, but autocompletion contributes to the overall feeling of speed and responsiveness. As long as the “feels fast” argument goes, Apple should a take a look at Google’s work here.

I liked Google’s Search app before, and I think the improved Voice Search is a solid addition…for English speakers. Right now, the new Voice Search won’t give smarter results to international users, and it would be unfair to compare it to Siri, because they are two different products. Perhaps Google’s intention is to make Voice Search a more Siri-like product with Google Now, but that’s another platform, another product, and, ultimately, pure speculation.

Will this lure customers away from Siri? Perhaps for Google-specific results, yes. The app is undoubtedly good at finding Google results and displaying content from Google’s Knowledge Graph-supported services. I wouldn’t call it a “Siri competitor”, because while some features might look similar to Siri (“Show me pictures of…”, “Play the trailer of…”, etc), on the other hand Google knows they can’t achieve the same level of integration of Siri. Voice Search is destined to remain what it is: search. Even with the wind changing, I doubt Apple will ever let Google put its hands on a core element for the future of iOS such as Siri.

Voice Search for iOS feels fast and it’s a good product if you’re an English speaker and use Google a lot. In that case, check out the app here.