When Federico and I hatched the idea for the contest last fall, it quickly became the centerpiece of Automation April. As Shortcuts tinkerers ourselves, we know that the best way to learn automation techniques is by doing, and with the contest, we hope to give the automation community a place to show off their best work and, perhaps, win some fun prizes along the way. The contest is a way to encourage people to explore what’s possible with automation, allow others to benefit and learn from that work, and recognize the best automations in several categories.

Whether you’re a Shortcuts expert or just starting out, we encourage you to participate in the contest. Shortcuts do not need to be complex to win in one of contest’s categories.

Our panel of judges will be evaluating submissions based on originality, performance, design, user experience, and usefulness. Pushing the boundaries of what is possible with Shortcuts is certainly a factor that will be considered in originality, but, at the same time, usefulness doesn’t require complexity, which is something we’ve emphasized often in our writing about Shortcuts. So, no matter your level of experience, we’d love to see what you build.

As you have probably gathered from the name, the Automation April Shortcuts Contest is limited to shortcuts built with the Shortcuts app. As I’ll detail more below in the rules, that doesn’t preclude you from using actions that take advantage of scripting and web APIs, but the automation must be a shortcut.

For this first year of the contest, we feel that these categories encompass the widest variety of automations that will benefit the automation community the most.

We’ve been fortunate to have recruited a stellar group of Shortcuts experts to help us pick the winners in each of the shortcuts categories.

In addition to Federico, Alex, and I, our judges are:

We’re excited to be working with such a talented group to help us with picking the winners of this year’s contest. Of course, judges may not participate in the Automation April Shortcuts Contest themselves. 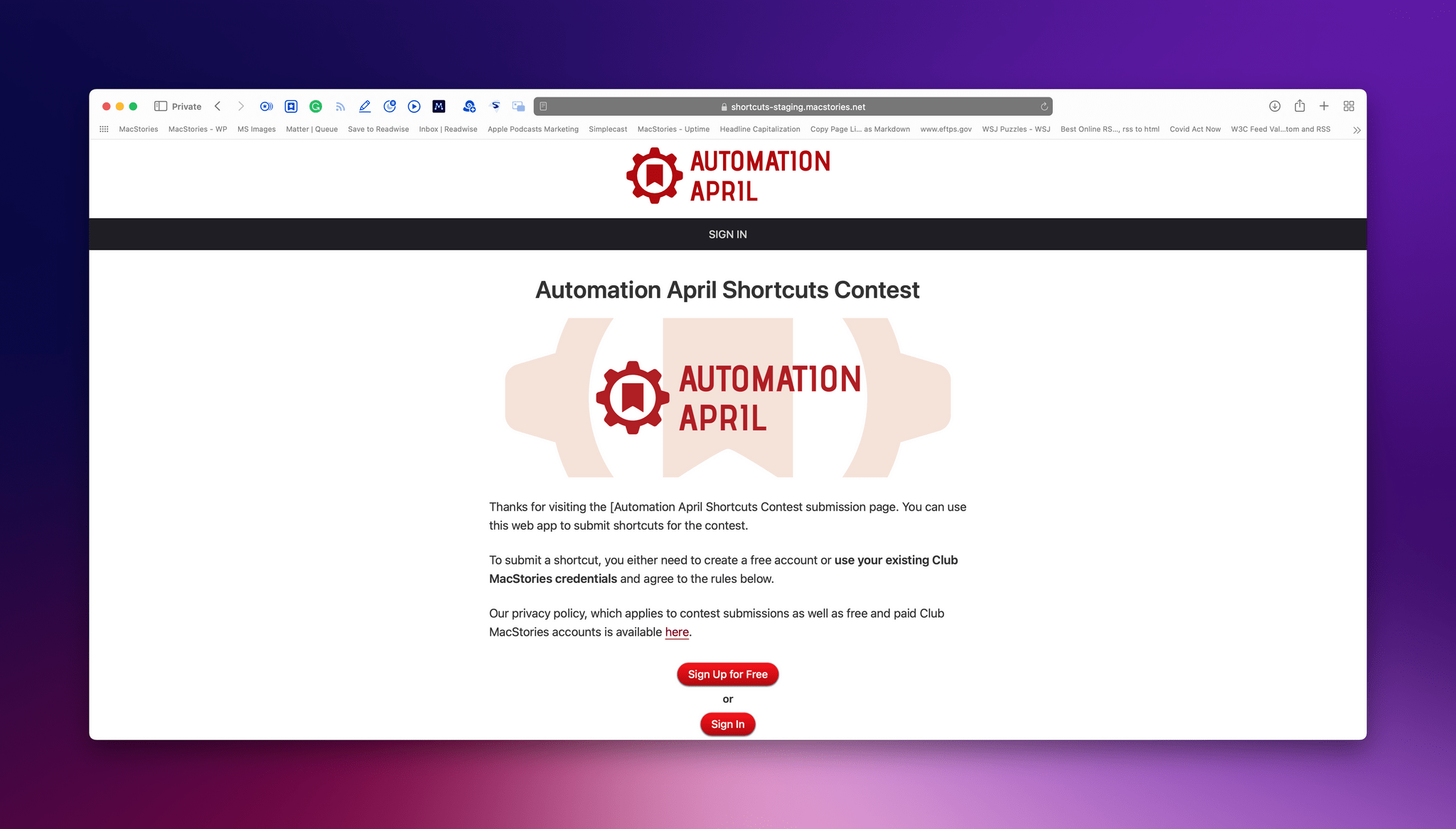 To help us manage the shortcuts submissions process, we’ve built a web app that builds on the membership system we introduced last summer with the relaunch of Club MacStories.

To get started, visit shortcuts.macstories.net. If you’re a Club MacStories member, you can use the ‘Sign In’ button to log into your existing Club account and start the submission process.

If you’re not a Club MacStories member, you’ll need to sign up for a free Club account using the ‘Sign Up for Free’ button, providing your name and an email address. Free Club accounts are a brand new MacStories feature that currently only takes submissions for the Automation April Shortcuts Contest. Submissions received any way other than via the Automation April Shortcuts Contest webpage will not be considered by the judges. 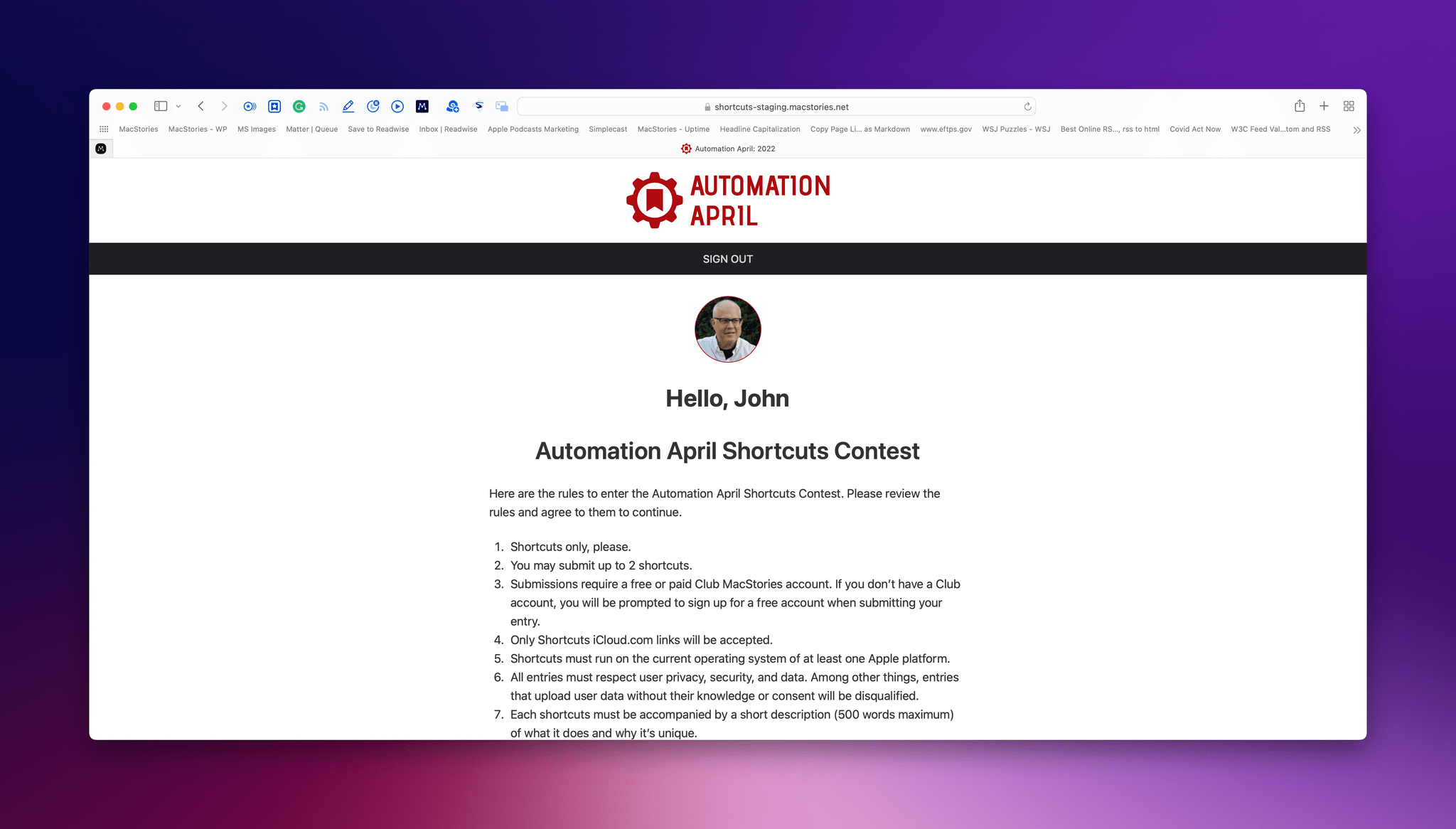 Once your account is set up and you sign in, you’ll see the Automation April Shortcuts Contest rules. Please read through the rules because they address many of the questions that we’ve received from readers. To submit a shortcut for the contest, you’ll need to agree to the rules by selecting the button on the bottom of the page. Agreeing to the rules will take you to a page with a form for submitting your shortcuts. There are fields for the name of your shortcut, an iCloud link to the shortcut, a list of any third-party actions your shortcut uses, and a description of what your shortcut does and why it’s unique, which is limited to 500 words. 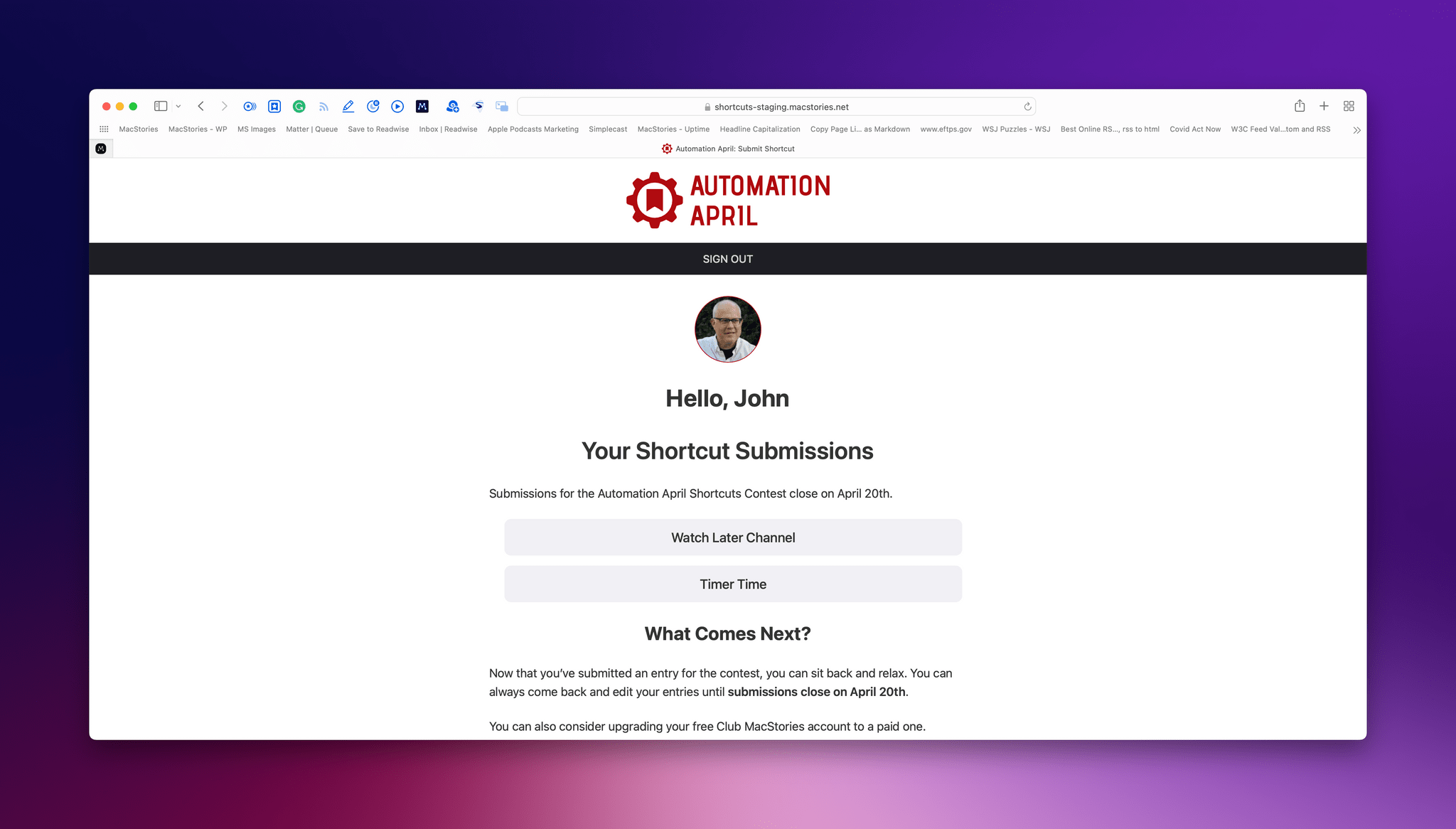 After you submit a shortcut, you’ll be taken to a page that lists your shortcuts submissions. If you want to edit one of your submissions, you can do so until the close of the contest by selecting the shortcut on this page. However, once the deadline passes, shortcuts cannot be revised.

The deadline for submitting shortcuts is 5 PM Eastern US time on April 20, 2022. Any submissions received after that time will not be considered by the judges.

As explained above, your submissions must be shortcuts, although they can incorporate scripts, web APIs, and actions from third-party apps. All scripts, web APIs, and third-party actions on which your shortcut relies must be listed in the space provided in the contest submission form. Also, your submissions must run on the currently released versions of Apple’s operating systems and must be submitted as iCloud links.

All shortcuts submitted must also respect the privacy, security, and data of users. For example, shortcuts that upload user data without their knowledge and consent will be disqualified.

As you’ll see from the submission form, we ask that you provide a brief description of your shortcut, along with an iCloud link, and a list of any script, web API, and third-party action integrations. You’ve got 500 words to explain to the judges what your shortcut does and what makes it special. Among other qualities, our panel will evaluate submissions based on originality, performance, design, user experience, and usefulness.

It should go without saying, but all submissions must be your own original work in their entirety. It’s fine if your shortcut was inspired by a technique you saw somewhere else, but shortcuts that copy the work of others will be disqualified. For the same reason, your shortcut should not use the Run Shortcut action to call another shortcut that you didn’t create. If available, please provide links to any blog post, Reddit thread, tweet, or other material that supports the originality of your work.

All materials you submit to us in connection with the Automation April Shortcuts Contest are subject to the MacStories Privacy Policy, which was recently updated to address the contest and free Club MacStories accounts. At the conclusion of the contest, winners will be announced on MacStories.net and contacted to arrange delivery of prizes. Within 90 days after that announcement, we will discard all contest submissions.

If you create a free Club MacStories account to participate in the contest, it will remain active after the contest concludes. You’ll be able to use that account to enter future contests and events, and it can always be upgraded to a paid Club MacStories account if you wish. We don’t spam our Club MacStories members and won’t do so if you sign up for a free Club account either, but we will contact you periodically about what’s happening at MacStories. Of course, you’ll be able to unsubscribe from those messages if you choose.

We’ve got some fun prizes for the winners of each category of the contest.

Winner of the Best Overall Shortcut award will receive a Stream Deck XL, Analogue Pocket, and other prizes.

Enter the contest now through April 20, 2022 at shortcuts.macstories.net.

You can also follow MacStories’ Automation April coverage through our dedicated hub, or subscribe to its RSS feed.