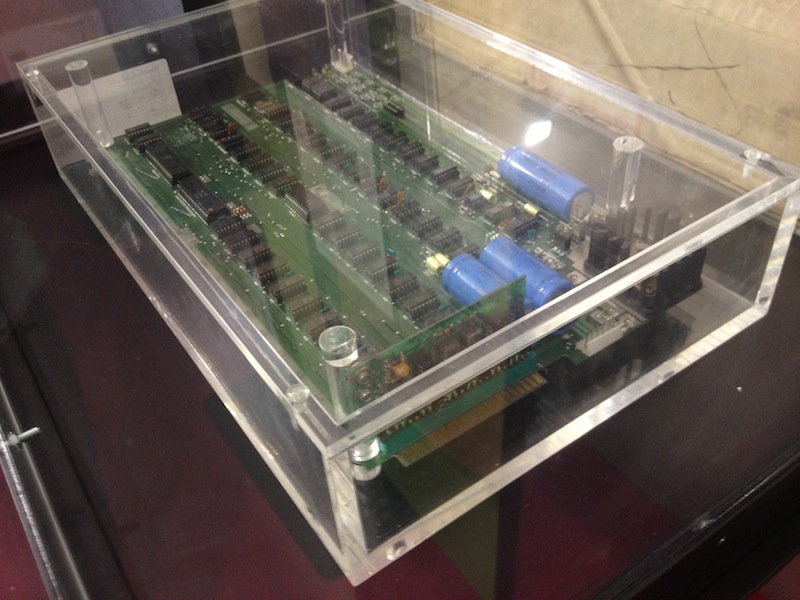 I live in Viterbo, a small town in Lazio, Italy, not too far away from Rome. My town is a beautiful place to visit with a rich history behind its Etruscan origins; unfortunately, it is often vastly undervalued by its citizens and municipal administration. My town lives and breathes in history, but very few people seem to appreciate its roots.

I took a walk in the center of my town today, and I ended up gazing upon an original Apple I. And an Apple II. And a Lisa. And a Macintosh. Today, the medieval buildings that make Viterbo an evocative architectural tapestry of art and history became, for a moment, a gallery for the modern history of technology.

Thanks to the efforts of Medioera, a festival of “digital culture” at its third annual edition here in Viterbo, Marco Boglione’s original Apple I gained a prominent spot in the gorgeous Piazza del Gesù (take a look at the location) alongside other Apple computers from the 70’s and 80’s, as well as Atari, Commodore, and IBM machines.

The Apple I exhibited at Medioera is the same that was auctioned (and sold) at Christie’s in November 2010. According to Medioera, this Apple I (#82) is one of the six working models left in existence. Computerworld has more details on the Christie’s auction from 2010:

The original Apple-1 was sold as a fully assembled circuit board with 4KB of memory but no case, power supply, keyboard or monitor. Christie’s Apple-1 included the machine’s original packaging, manuals, cassette interface and basic tape, documentation and a letter from Steve Jobs, but some parts may not have been original, said computer hobbyist and retrocomputing expert Eric Rucker.

The #82 Apple I has also been indexed by Mike Willegal’s Apple I Registry website. The unit has, according to various sources, a lot of history attached to it. Apparently, it was originally sold by Steve Jobs without telling Steve Wozniak, his partner, to Craig Solomonson through electronic dealer Frank Anderson of Great Falls, Montana. Solomonson worked for MECC, an organization that provided “computer services” to schools in Minnesota in the 70’s. The company dominated the market for Apple II software within schools, and it was behind commercial successes like The Oregon Trail and The Secret Island of Dr. Quandary. Spun off as a private corporation in 1991, MECC was then acquired by SoftKey in 1995 for $370 million in stock.

According to Solomonson, his garage was filled with computers because he had to test MECC software in advance. Solomonson also told the story of his purchase of the Apple-1 on The Vintage Mac Forums:

One of my more interesting encounters while working at MECC was a visit from Steve Jobs in 1982. He told his “Apple 1” story and I immediately started my search for one of my own. He was not very cordial when I asked where to look, but a guy with him (Mike Murray) gave me a lead and it resulted in purchasing an Apple 1 (serial no. 01-0005). I eventually parted ways with my Apple 1 when Jean Louie Gasse of Apple approached me to buy it. He wanted to trade me a Macintosh with a laser printer for it. I said no. I wanted to buy a new van and eventually Apple paid the price. So…Woz sold his van to finance the Apple 1–and I sold my Apple 1 to finance my van. Worked out pretty well. I have had 2 other Apple 1 computers since. One now lives in California and other hangs on the wall of my old boss.

According to Willegal’s Apple 1 Registry, the #82 Apple I was then sold to Jesse Sackman in California; it then re-appeared as an auction on eBay in late 2009, and was sold for $50,000 by user  “apple1sale” to “julescw72”. Cult Of Mac has a post from 2009 about the eBay auction; here’s a high-res image of the unit linked on Willegal’s website.

Fast forward to 2010, the #82 Apple I was auctioned at Christie’s in London, and sold for £133,250 to Italian businessman and collector Marco Boglione, president of BasicNet.

After Buglione’s purchase, the Apple I began its tour around Italy. It was first “brought back to life” in Turin, Boglione’s hometown, at the at the Politecnico di Torino university. From our coverage of the event last year:

The computer was rebooted for the first time in years today at the Politecnico di Torino university in front of a large crowd and Boglione himself. Italian website Macity, which was there to cover the event, reports [Google Translation] after an initial technical issue that was fixed in a couple of minutes the Apple I was able to start up, display its usual list of random characters upon booting (while connected to an external display and keyboard this time), the typical blinking cursor and then, after running a simple BASIC program, a sort of “Hello World” message appropriately changed to “Hello Polito” in honor of the school that hosted the event.

Here’s a video from the first reboot in Turin in 2011. And below, this is how I stumbled upon the #82 Apple I myself this evening. 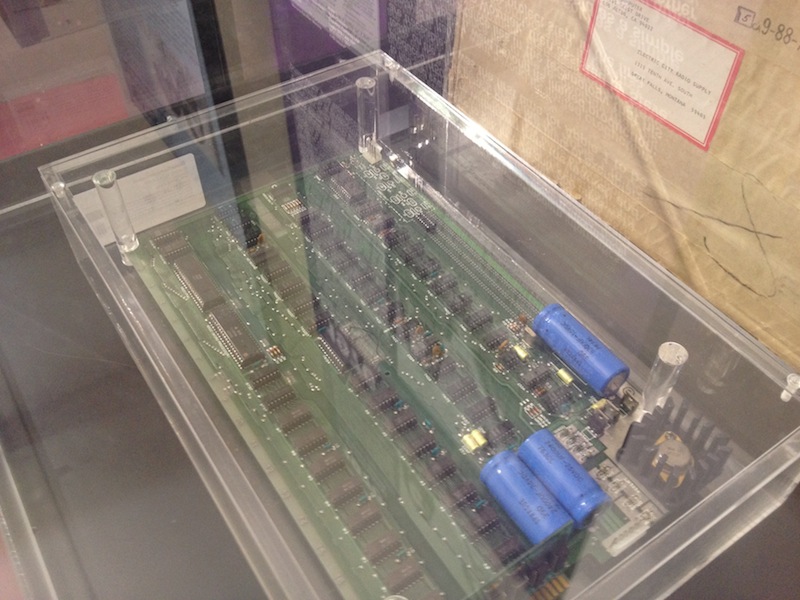 Sealed in a glass box, the machine wasn’t connected to any monitor or keyboard; there was, however, the original shipping label showing Jobs’s garage address (11161 Crist Drive in Los Altos, California) as well as the one for Frank Anderson’s Electric City Radio Supply in Great Falls, Montana. I wasn’t able to look at the machine’s documentation, which wasn’t on display at Medioera. 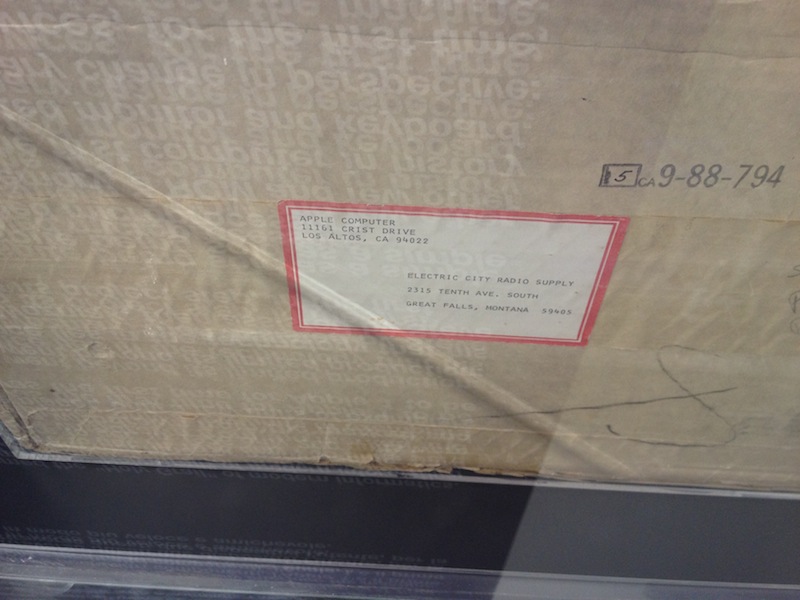 As I mentioned above, other computers and memorabilia were exhibited. For instance, an Apple II: 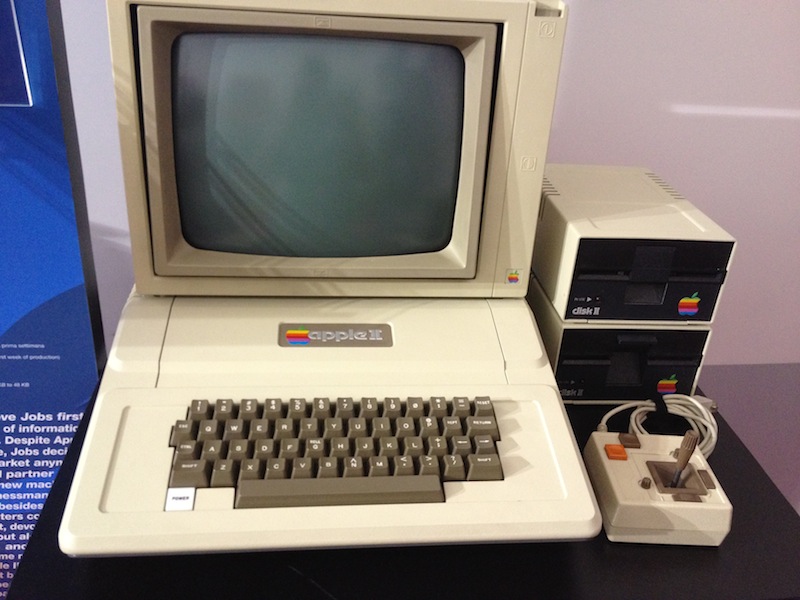 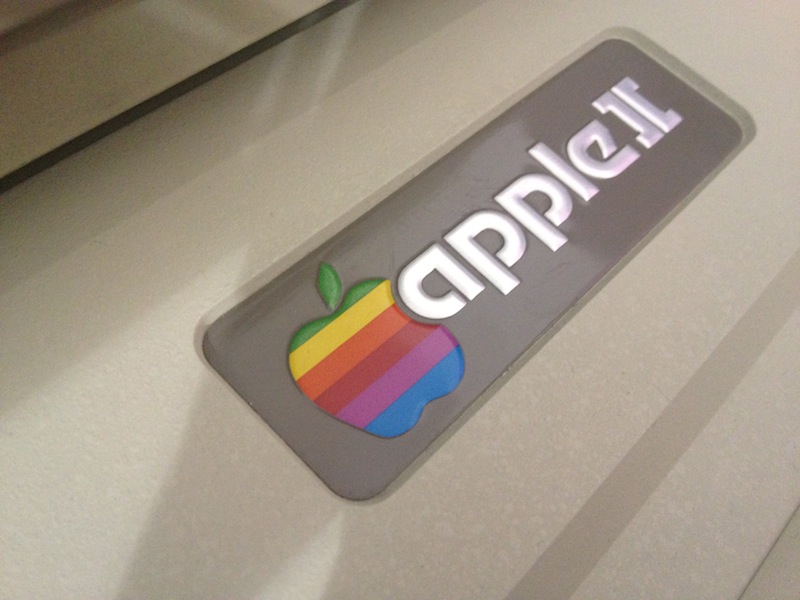 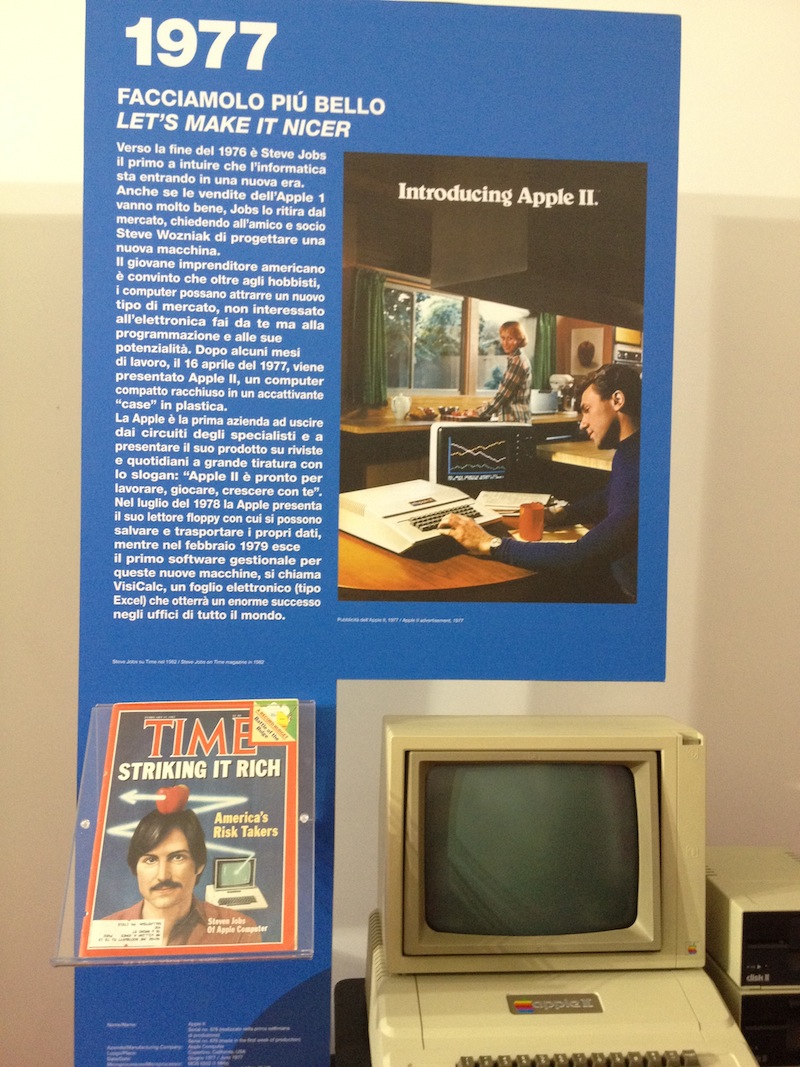 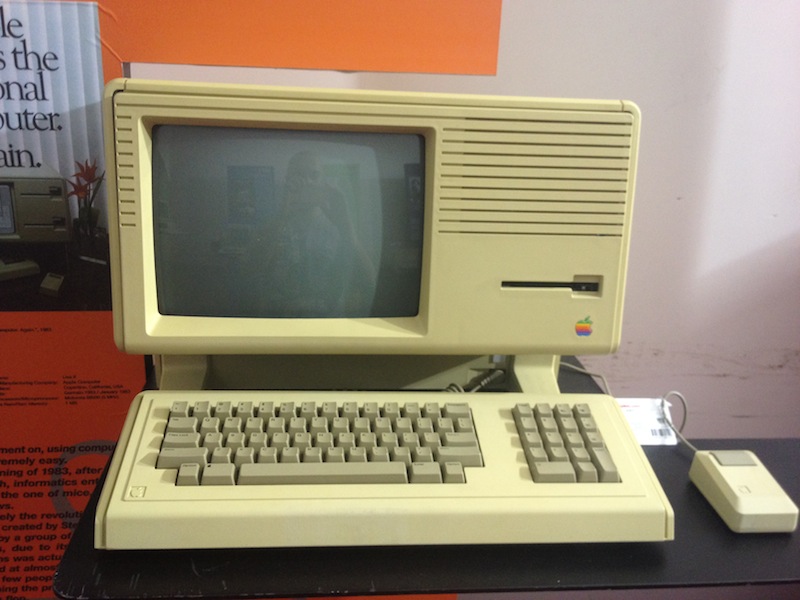 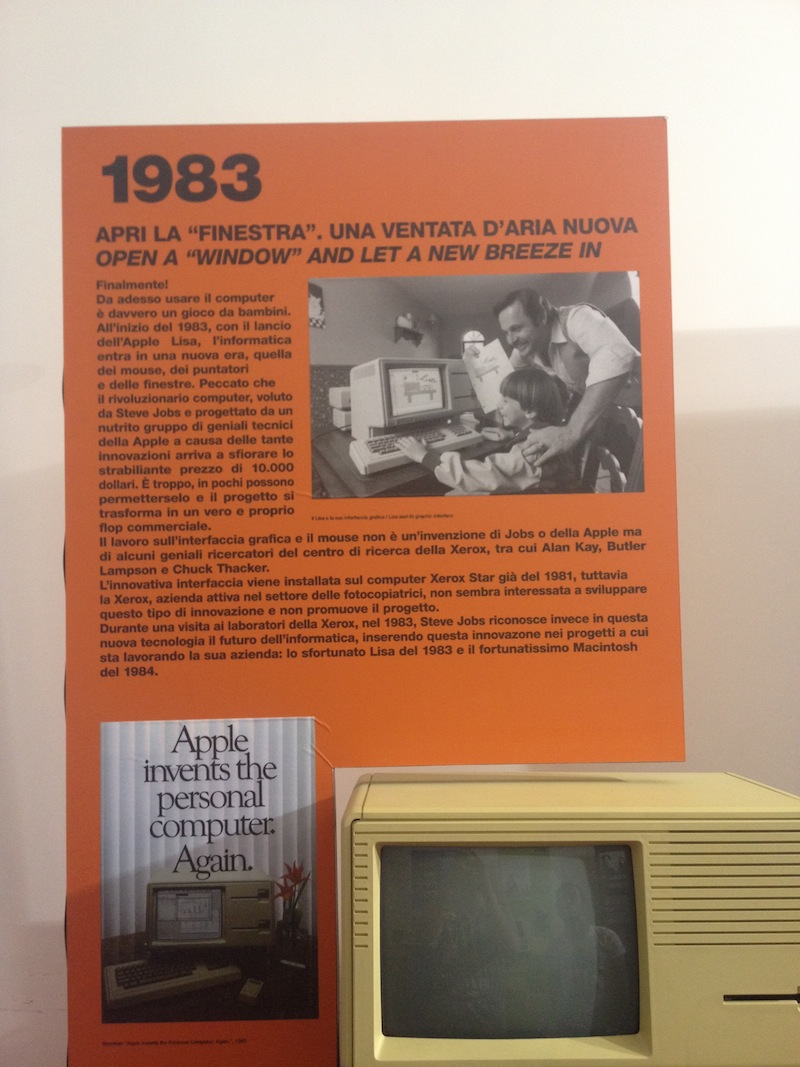 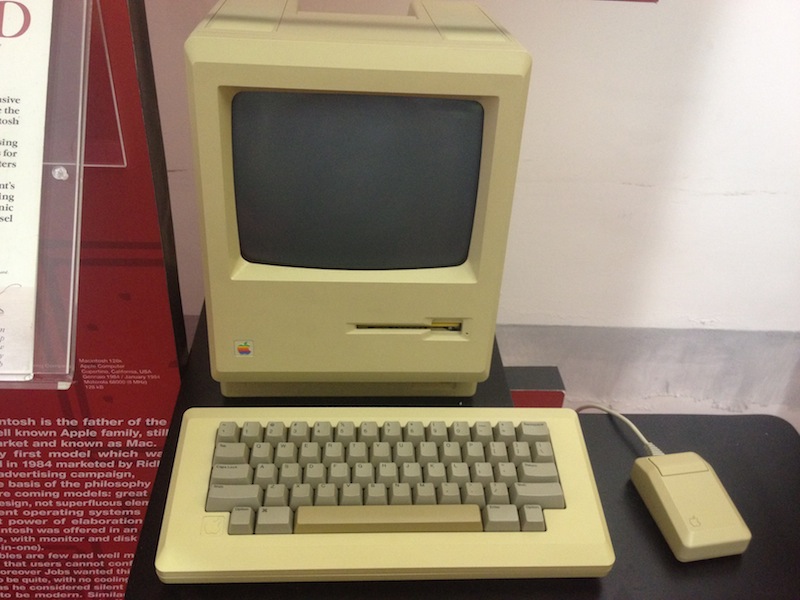 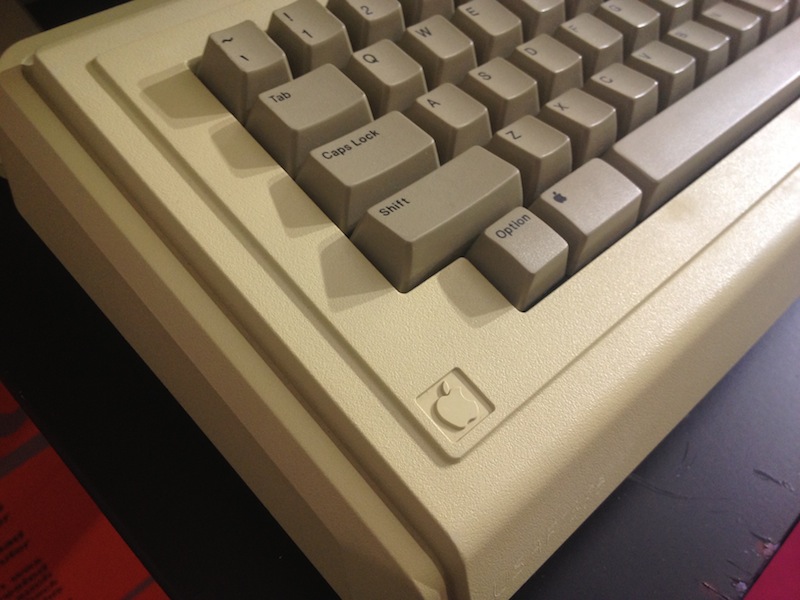 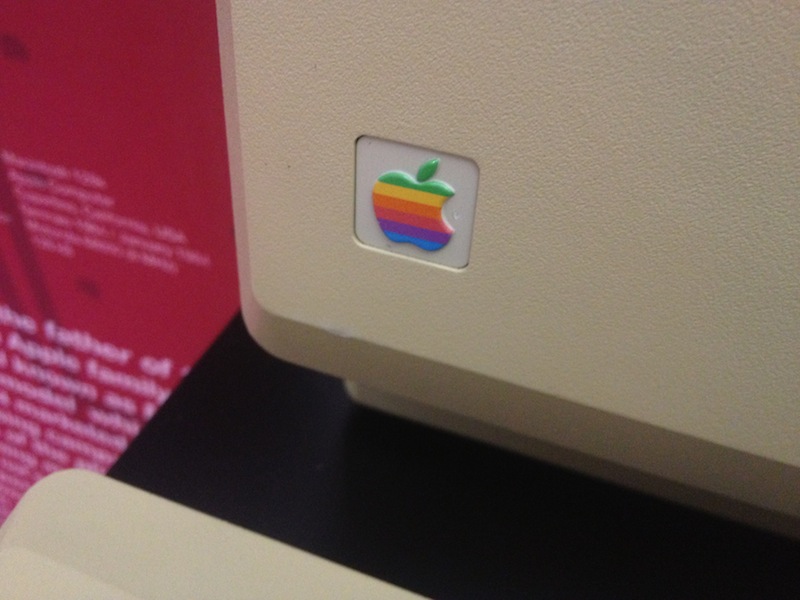 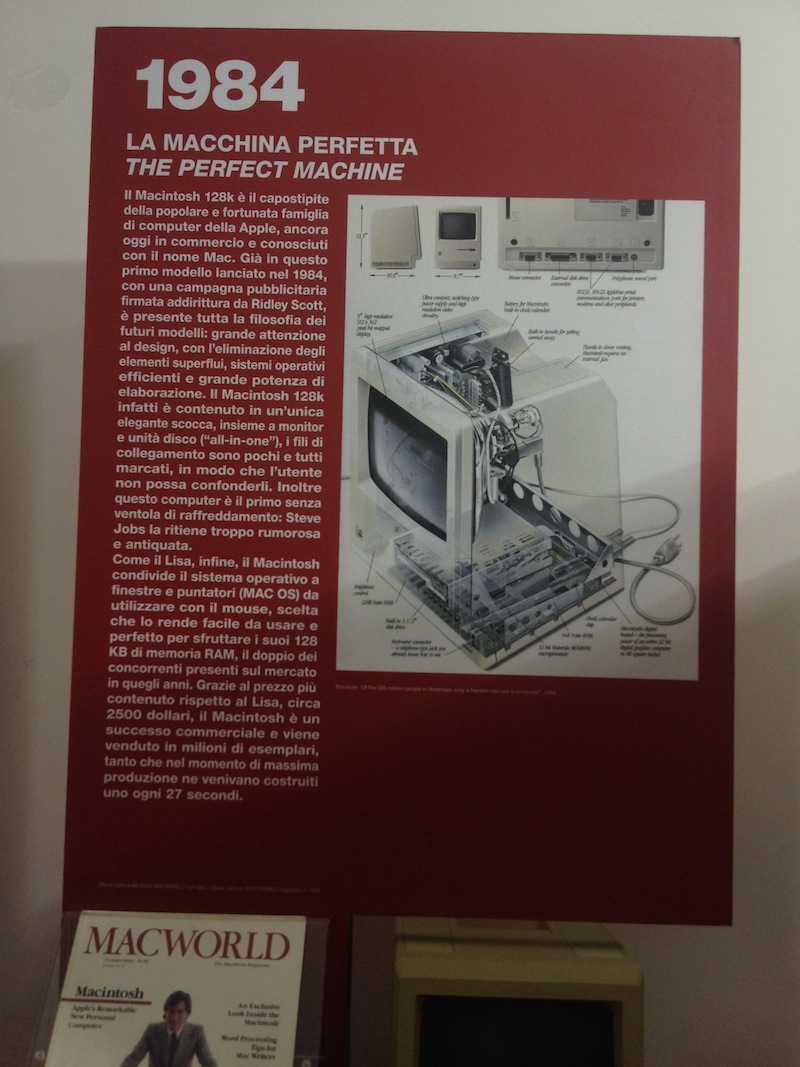 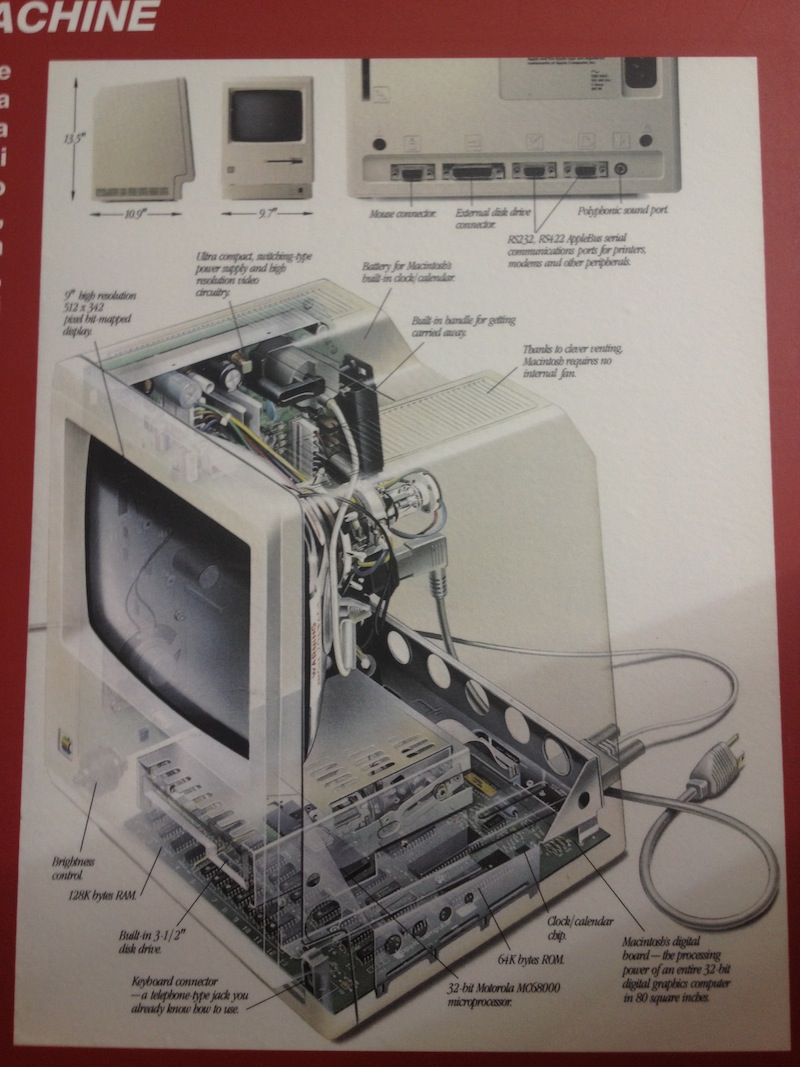 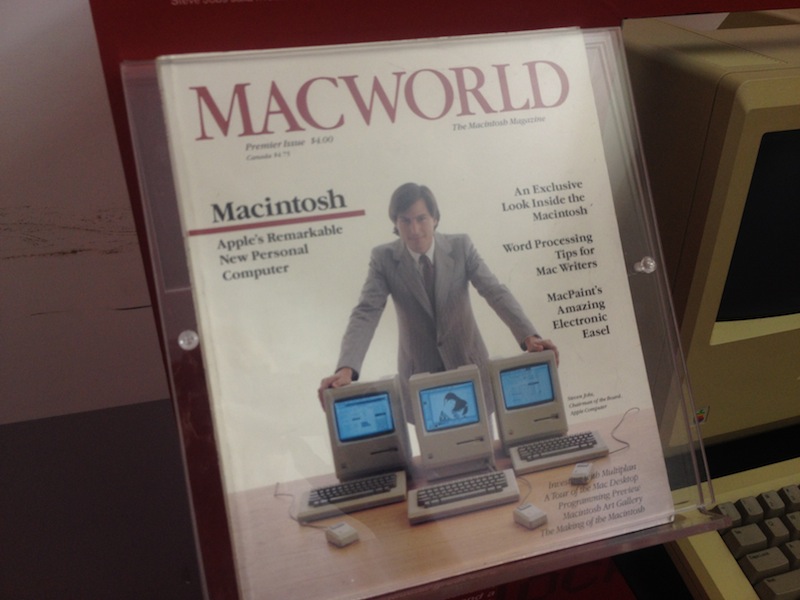 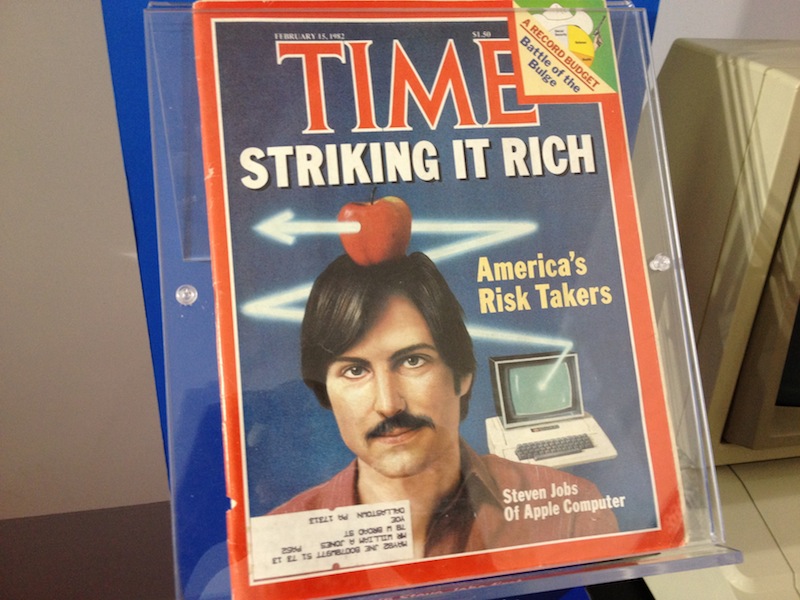 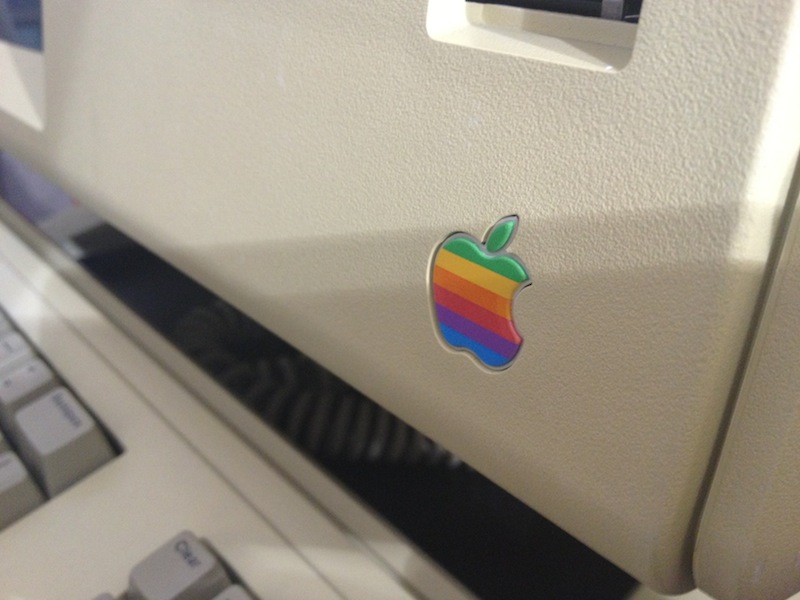 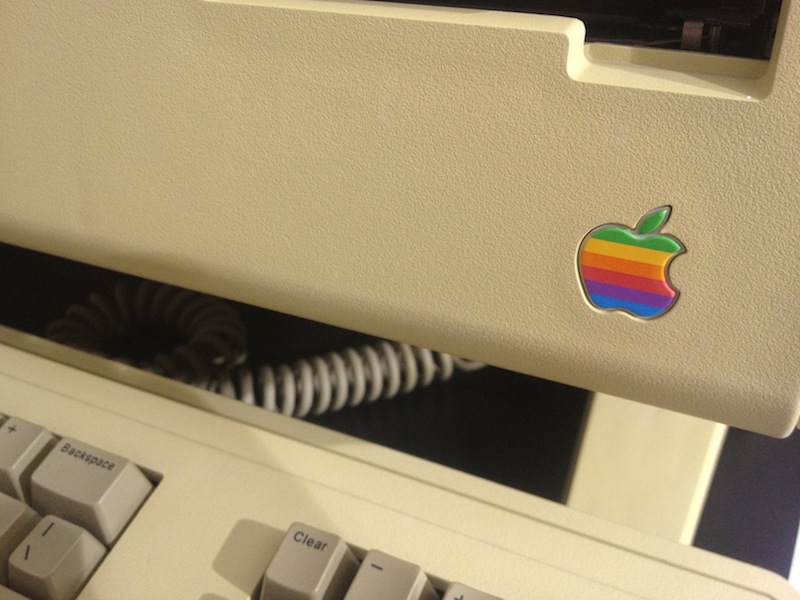 And, of course, an original Macintosh: 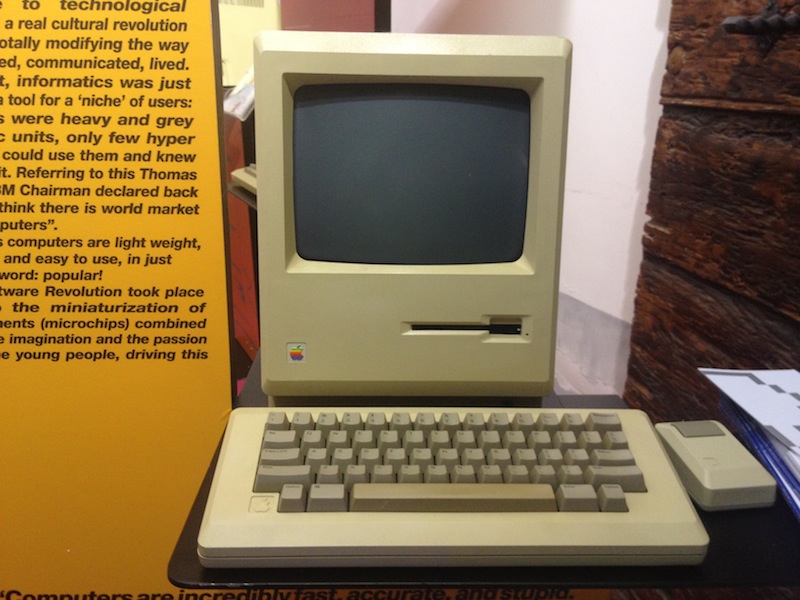 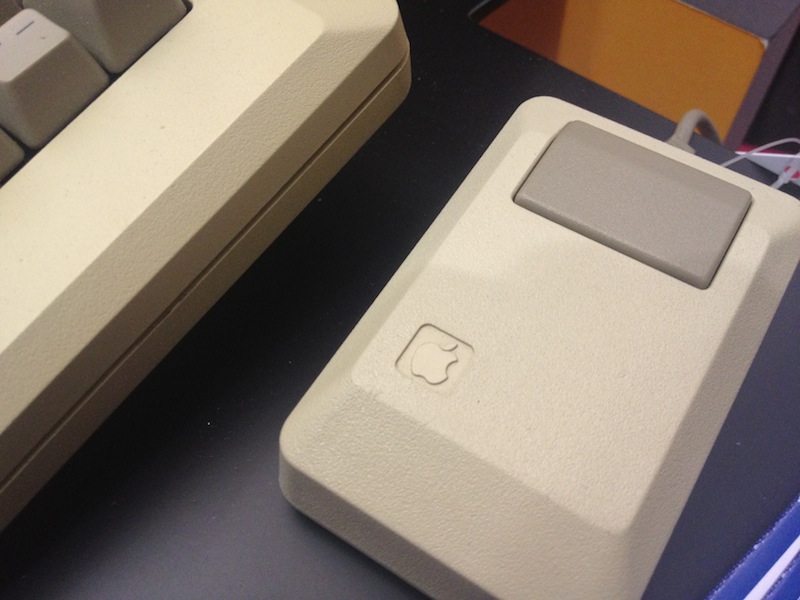 If you happen to be near Viterbo, come check out Medioera. If you can’t, head over their website for more details, blog posts, photos, and videos.

They are just computers, but they made history. And this week, they’re in my town.