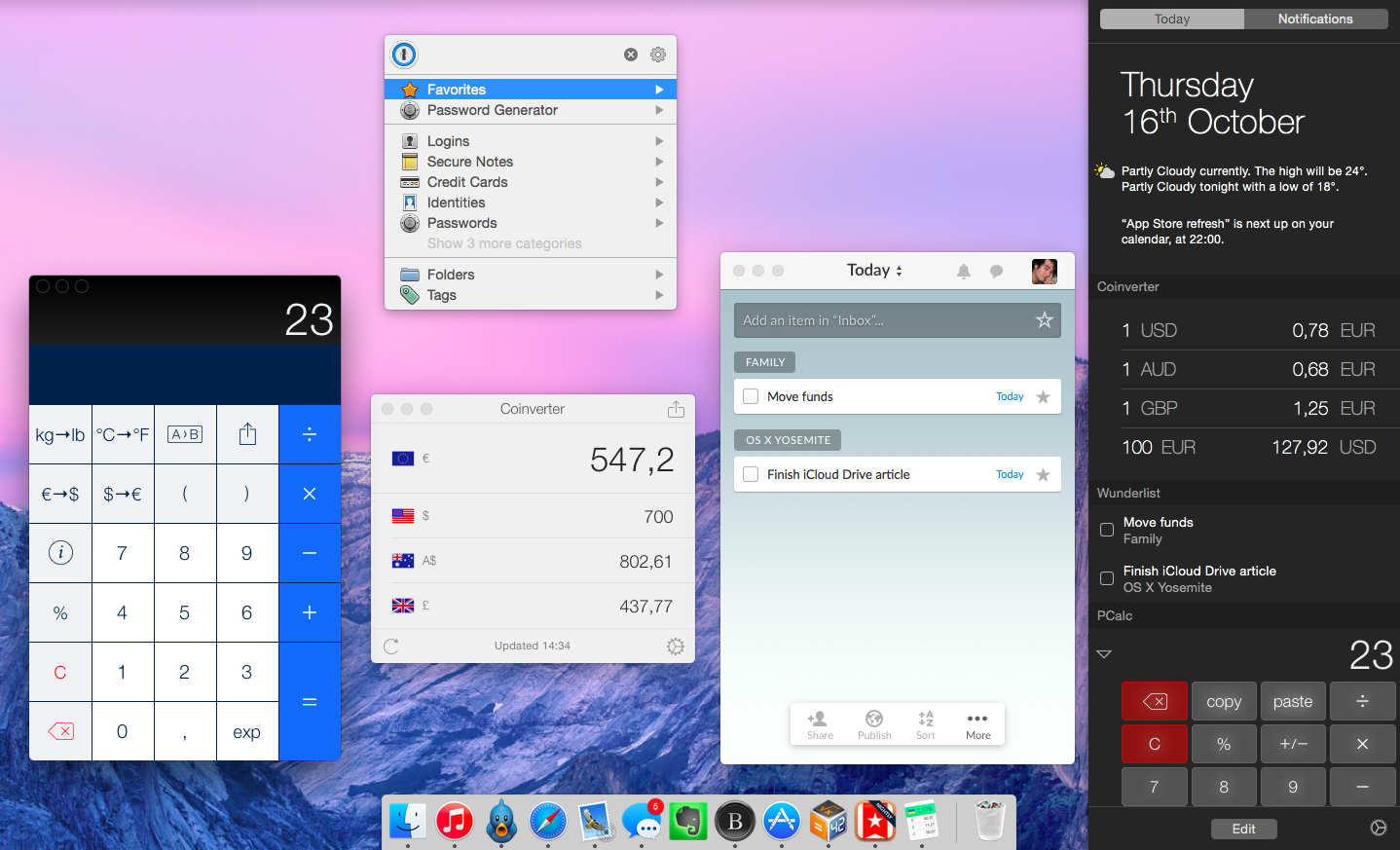 OS X Yosemite, first announced at WWDC in June and released today by Apple, brings a major redesign of OS X and a variety of new features such as widgets, extensions, Handoff, and Continuity. While I don’t use OS X as much as I did a few years ago, I still rely on the system for tasks that I can’t complete on iOS alone.

Below, you’ll find a roundup of the third-party Yosemite apps I’ve been testing over the past couple of weeks, which should give you a good idea of the design changes and new functionalities Yosemite is bringing to OS X.

6Wunderkinder’s cross-platform task management app has received a Yosemite update that brings a general UI refresh, a Today widget, and a share extension to easily save new tasks. In terms of design, Wunderlist has always featured a custom look that didn’t completely adhere to certain OS X conventions, and while that is still the case with a few interface elements that don’t feel native on the desktop, the UI is cleaner and more in line with Yosemite.

I’m more impressed by the implementation of the widget and share extension. Once enabled, the widget lets you keep an eye on items that are due or overdue, letting you easily check them off without opening the app (Wunderlist needs to be in the background). There’s also a smiley face if you have no items in your todo list for the current day. 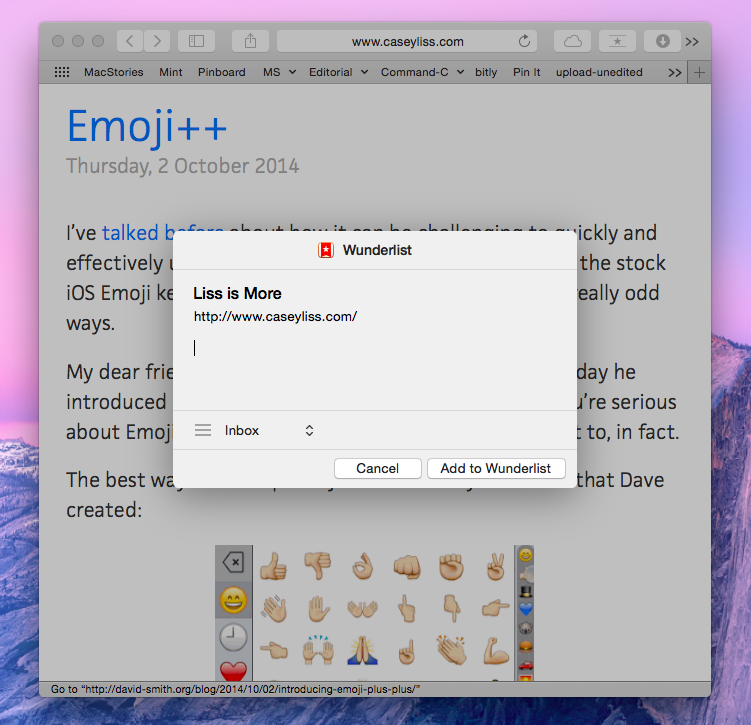 The share extension lets you save anything into Wunderlist using the share sheet. In my tests, I tried the extension from Safari (primarily due to a scarcity of Yosemite apps that properly supported share sheets) and it allowed me to easily save webpages from the browser into Wunderlist. The extension comes up as a floating sheet that previews the webpage or other string of text you’re saving – you can change the destination list before saving, but unfortunately the app doesn’t remember the last list you used with the extension.

Wunderlist is free on the Mac App Store (version 3.1 is propagating now).

Coinverter is a simple currency converter that has a clean interface and a widget for at-a-glance conversions between currencies. The app is straightforward: you can set up a list of your favorite currencies and typing in any field will display real-time conversions in the others (alas, the app doesn’t launch with the cursor ready to type in the first currency).

The widget is nice: you can click the “i” button to configure “currency pairs” and see conversions of 1, 10, or 100 in any given currency. I would like to see the ability to enter shortcuts for an arbitrary amount of Euros or Dollars in a future update.

Coinverter is available in public beta now (direct link) and will be released on the Mac App Store soon. 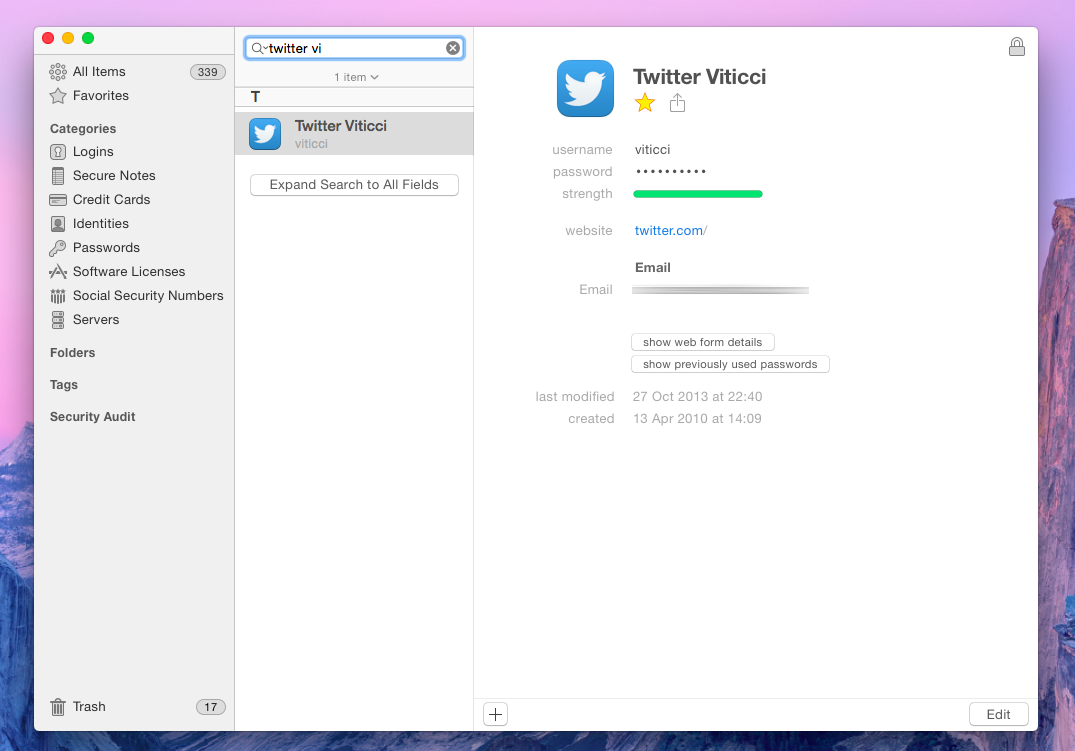 Building on the solid foundation of 1Password 4 for Mac, 1Password 5 brings a subtle and elegant Yosemite redesign, a more robust 1Password mini, support for dark mode, and rebuilt iCloud Sync that takes advantage of CloudKit.

The new 1Password looks great: icons have been redesigned, the layout has been cleaned up, and everything generally feels more spacious and organized. I haven’t been able to try iCloud sync with CloudKit because I use Dropbox, but I have played around with the updated 1Password mini and I like how it now pops up in the middle of the screen when activated from a keyboard shortcut.

Overall, 1Password 5 isn’t dramatically different from 1Password 4, but it looks good on Yosemite and it should be faster for users who rely on iCloud. 1Password 5 will be available soon as a free update. 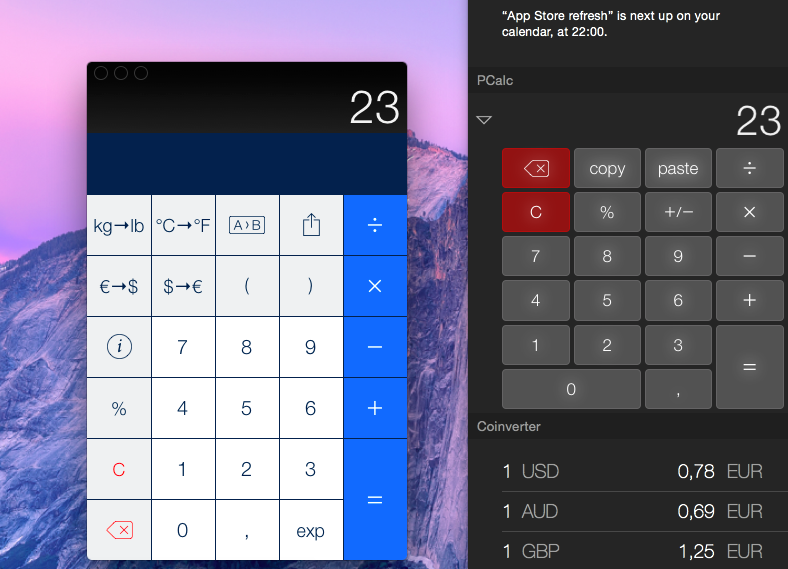 I praised the updated PCalc for iOS 8 and James Thomson didn’t disappoint with the app’s Yosemite update. Notably: PCalc 4.1 has a calculator widget, it supports Handoff, and it can use the custom layouts created on an iPhone or iPad.

As I wrote before, I don’t need the full functionalities of PCalc (I’m not Dr. Drang), but I’ve enjoyed the possibility of creating custom layouts with buttons for currency and unit conversions. On Yosemite, PCalc 4.1 automatically made these layouts available to me thanks to iCloud; setting one as default was just a matter of visiting Preferences > Layouts > iPhone > Vertical.

I couldn’t test Handoff support because my MacBook Air (mid–2011) isn’t compatible with Apple’s new technology, but my colleague Graham Spencer told me that Handoff worked as expected across PCalc for iOS 8 and PCalc for Yosemite, letting him continue calculations on either device.

Like the iOS version, a widget has been added to PCalc for OS X, which allows you to perform quick calculations in Notification Center and (optionally) have the result synced with the main app. Because of Apple’s limitations with widgets, however, I noticed that I’m not using the desktop widget as much: widgets don’t support keyboard entry, and I find it strange to be forced to click numbers on a Mac while I could just hit numbers on my keyboard to enter data in the widget. Hopefully these limitations will be lifted as Yosemite evolves. 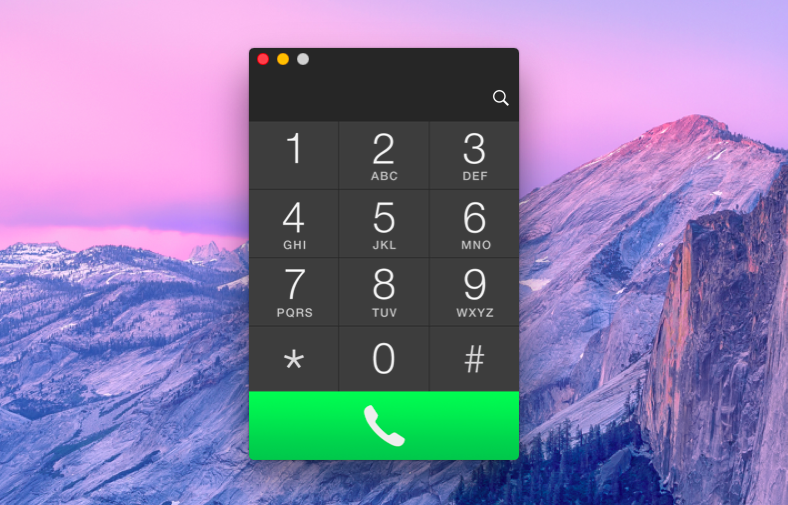 Yosemite’s FaceTime app lets you dial any number or contact and perform phone calls through your iPhone, but Continuity Keypad brings a more pleasant interface to the entire process.

Continuity Keypad shows a dialer with large buttons you can click; alternatively, you can type numbers with your keyboard and your Mac will emit loud, old-school phone keypad sounds. If you don’t want to type numbers, you can click the search icon and look for contacts in your address book. When you’re done, hit the Call button and the app will ask for permission to use FaceTime and Continuity to make a phone call through your iPhone (you can turn off the permission request in Settings > Automatically Confirm Calls). 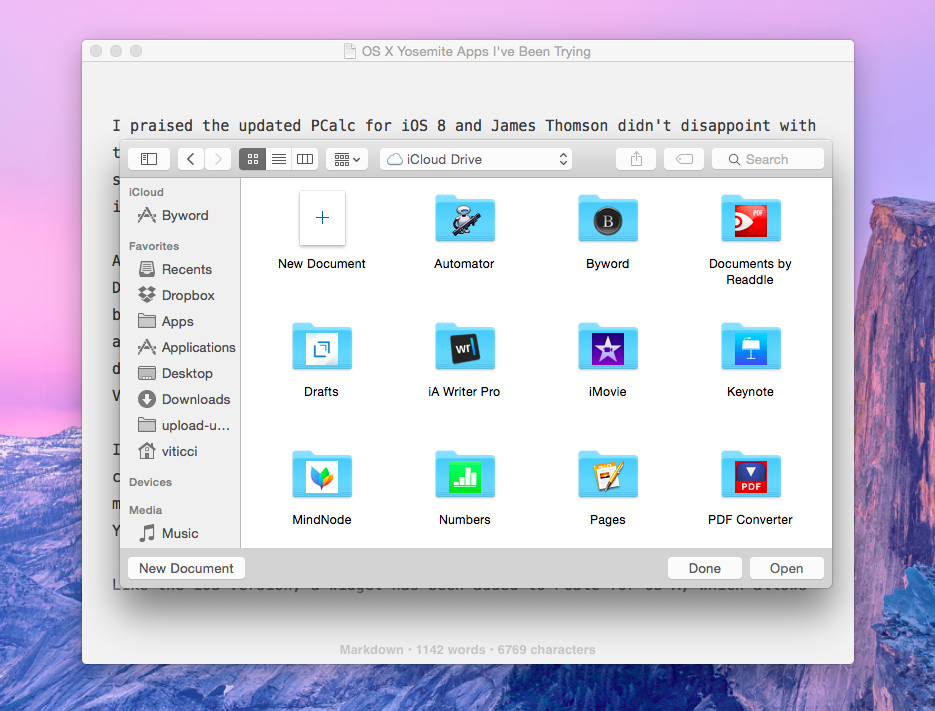 My favorite text editor for OS X is receiving an update for Yosemite with fixes, Handoff integration, and iCloud Drive support.

I couldn’t test Handoff integration, but iCloud Drive worked well in my tests. You can hit ⌘O to bring up the standard file picker, which has been enhanced in Yosemite with an iCloud Drive option (click the dropdown menu, then choose iCloud Drive) that lists all your app folders and files. I tested this with TextEdit files that had been previously opened by Readdle’s Documents app on iOS 8, and it worked well.

Byword 2.3 will be available soon on the Mac App Store. 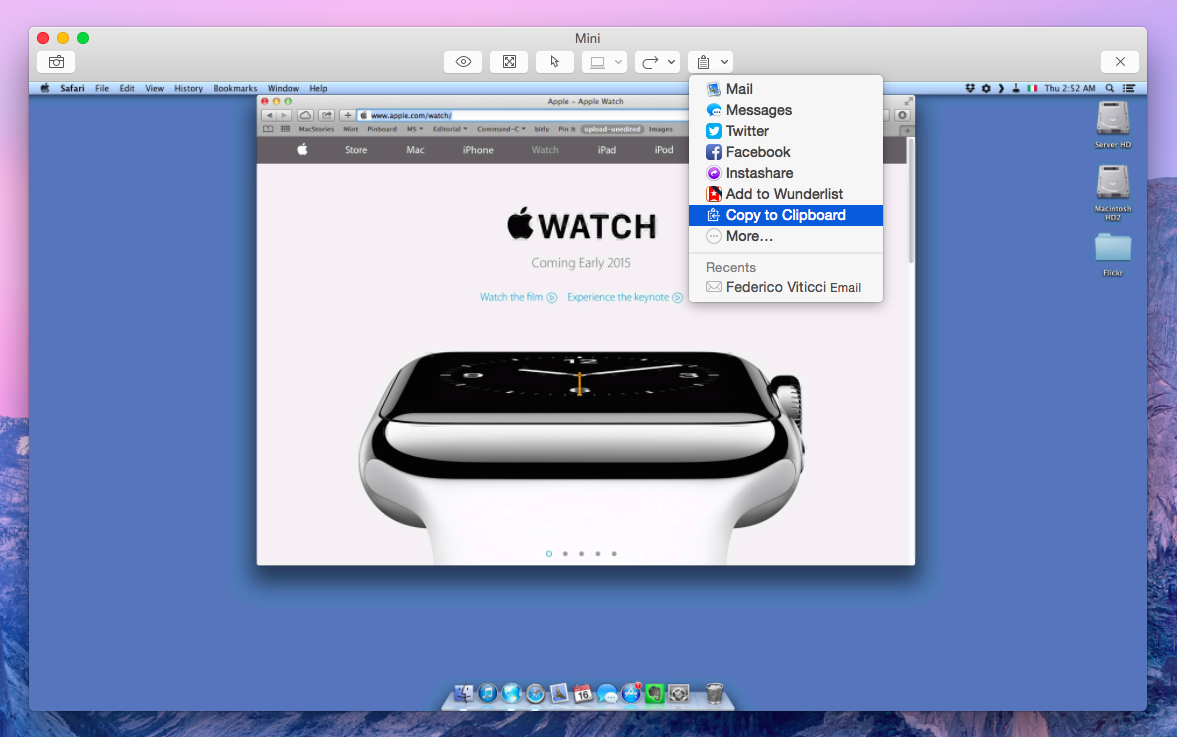 Edovia’s VNC client has been my favorite app to connect to my remote Macs for a long time and the latest 3.5 update delivers all the great improvements that were added on iOS 8 last month. Screens 3.5 for Yosemite features support for Adaptive Display, has a cleaner user interface, and lets you connect as a guest to other people’s computers using the Screens Express service.

Like on iOS 8, my favorite feature is the revamped clipboard integration. Screens can now send rich text and use a shared clipboard, which lets you copy and paste back and forth between your local and remote clipboard through VNC.

I’ve been using Screens for years, and Edovia’s iterative improvements never disappoint. Screens 3.5 is in review and will be available soon on the Mac App Store.