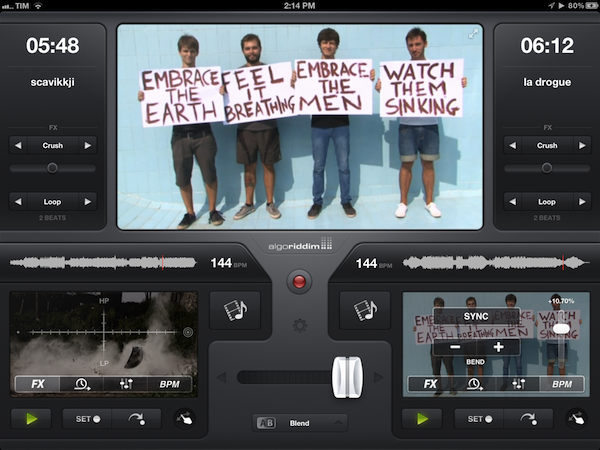 In late 2010, German software maker Algoriddim released djay for iPad, a powerful portable audio mixing solution that went on to win an Apple Design Award at last year’s WWDC. With a combination of advanced features, intuitive UI design, and a care for attention to detail, djay became one of the most well-known DJ solutions with seamless interoperability across the Mac and iOS. However, because I am no audio professional, I sometime found myself slightly overwhelmed by the feature set of djay – the app certainly requires a bit of basic audio knowledge to get the most out of its settings such as visual mixing with waveforms, beat-matched looping, and pre-cueing.

For the past week, I have been testing Algoriddim’s new iPad app, vjay, and not only I haven’t found myself scratching my head in front of some complex setting or obscure audio terminology – I had fun using the app, taking advantage of the complex tech that the developers embedded in a $9.99 package to, ultimately, provide an engaging experience for the users. vjay is powerful, but, in a way, more accessible than djay.

As the name suggests, vjay works with videos. And perhaps it is the app’s focus on visuals, rather just waveforms, that increases its “wow” factor and accessibility to users who, like me, aren’t exactly mixing and syncing tempos on a daily basis. Furthermore, I also believe that, from a mere technological standpoint, vjay’s video capabilities offer a more tangible, visibly outstanding showcase of the iPad’s engine. More than djay, I found vjay to be a perfect mix – no pun intended – of powerful technology and user-friendliness.

vjay can mix videos in real-time. Taking the underlying concept of djay and bringing it to a different type of media, vjay comes with a split interface displaying two content sources at the bottom, and a large, central visual preview at the top. At the bottom, you can pick videos (and even audio) from two separate “add media” buttons that are directly connected with your Camera Roll, video and music library, iTunes Store, and pre-bundled content offered by Algoriddim as a demo to get you started. In my tests, I decided to pick two .mp4 videos from my friends @AldrinBand that I had previously synced to my iPad, and see what vjay would allow me to do with them.

The result was surprisingly fun. As you pick a video from your library (but you can also shoot a new one with your camera-enabled iPad, as vjay only works on the iPad 2 and iPad 3), the app automatically analyzes its waveform and BPM; these are displayed above a video thumbnail that is fully touch-controlled. You can load just a video if you want, but obviously the app’s main concept is based on letting you mix multiple items, and record the output so you can share it with your friends locally (to the Camera Roll) or wirelessly (via AirPlay).

Between the two video thumbnails at the bottom, there is a slider that allows you to manually switch between videos in real-time through the selected transition available in the menu right below it. You can choose between Blend, Cube, Swap, Grid, Mosaic, and Push. These transitions are applied in real-time to currently playing videos: you’ll be able to hit play on two videos, and start moving the slider left-to-right and vice versa to see the associated animation change instantly in the upper part of the screen, where the larger preview is located. It’s neat, incredibly smooth on the iPad 3, but it’s not the whole story. 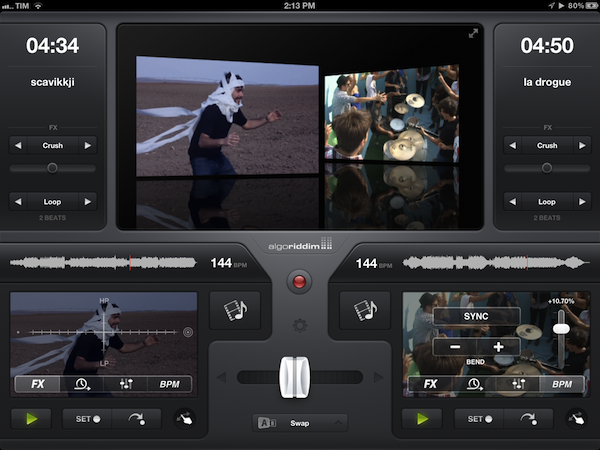 See, like I said, I am no audio or video professional, but I think this user-friendly interface to easily switch between two videos (and record the result) would alone justify the entry price of $9.99. In the past, I have tried to apply some simple transitions and effects to my home movies, and even “basic” software like iMovie or Avid Studio for iPad made the process of selecting two videos and blending them surprisingly head-scratching and confusing. With vjay, the streamlined interface and touch controls enable me to a) pick two videos, b) hit record, and b) use a touch slider to animate the transition. I am sure apps like iMovie and even more complex tools like Final Cut would let me do this with two clicks once I know the procedure. However, vjay doesn’t want to be a substitute for this type of apps, and I am not willing to learn a complex (and pro-oriented) UI just to mix videos of my dogs, friends’ band, or birthday party. It’s about letting me do one thing extremely easily, and vjay – through the combination of tech and understandable UI decisions – lets me do just that.

Back to my music videos. As I played around with vjay’s more fancy effects and options, I found out that I could “videoscratch” and apply “effects” to my videos in real-time, too. Now, I am no audio engineer either, but I think Aldrin’s videos could use some Strobe and pixelated Crush here and there. So as the two videos were playing, I moved the slider to the right to set a visual cue point (a point in the video I particularly liked), hit pause, and went back to the other video on the left. As that video reached the point where I wanted to showcase my all-fancy video mixing skills, I quickly jumped backed to the other video, and “scratched” on the thumbnail to apply a Strobe effect to the point I had saved. The BPM was synchronized (vjay offers such option), and everything was done in real-time as I was moving my finger on the iPad’s display to adjust the intensity of the Strobe effect – this is incredibly rewarding, as you have a direct connection between your touch gesture, the video, and the whole mix laid out in a great-looking interface that also happens to be recording what you do without missing a beat. As I was done with my effect, I did a bit of slow-motion, hit the slider, and I was back to the first video.

There’s lots of things vjay can do if you take your time to read through the extensive feature set available on Algoriddim’s website. From my perspective, though, I can say that I came away with the impression that vjay is visually and technologically more impressive than its audio counterpart, djay. With a gorgeous and easy-to-understand interface that’s fully updated for the iPad’s Retina display and a powerful engine that makes switching between two 720p videos a breeze, vjay successfully demonstrates – again – that the iPad is more than a “consumption device” if developers are willing to go beyond old UI and UX schemes.

In a single, well-designed package, you have an app that’s equally fun to use and powerful – vjay scales incredibly well from users like me – who perhaps just want to mix two music videos or easily apply transitions to their iPad-recorded home movies – to professional videophiles who will surely be able to create richer, more impressive video mixes than I did.

vjay is impressive, and it’s being offered at $9.99 for a limited time. Check out the promo video below.