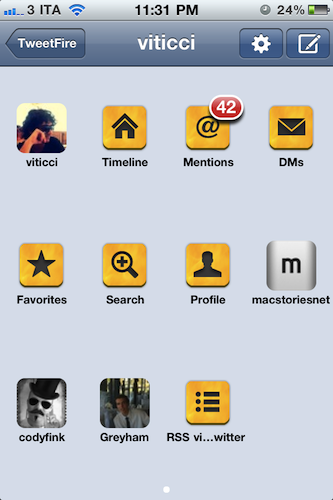 In my review of the first version of Tweetbot, I asked whether it was still possible to bring innovation to Twitter clients for iPhone, a category of apps that have offered more or less the same features for quite some time now, with the focus now being on interface design to make an app feel “unique”. With different takes on the same concept (interacting with Twitter) and with the company itself advising against “regular” third-party client apps that most users won’t install (they say people fire up the App Store, download Twitter’s official app, and that’s it), mine was a legitimate question. Is there still room for something new?

As Tweetbot’s successful launch has proved, there’s a niche of users willing to try out what’s new in the Twitter ecosystem. Tapbots have managed to build a loyal new userbase of customers interested in their unique spin on Twitter clients – these people have stuck around long enough to wait for push notifications and the consequent rapid rollout per Twitter’s own API approval. But I also take a look at Twitterrific from The Iconfactory, another third-party client that has built its own ecosystem across the Mac and iOS and which, from what I’m hearing, is about to introduce great new features in an upcoming update. I’ve mentioned Tweetbot and Twitterrific so far, but there are dozens of clients from both big and smaller indie companies that are thriving in spite of Twitter’s official free tools for the iPhone, iPad, and Mac.

And then there’s Apple’s initiative with Twitter and iOS 5, which will bring native Twitter access (single sign-on, contact lookup, tweet integration) to its mobile operating system. Users will be able to tweet photos and webpages, addresses in Maps and cool videos they find on YouTube. But they won’t be able to read their timelines, or receive push notifications through Apple’s native implementation. For these reasons, and because it is my job to look out for what’s next, I believe innovation in Twitter clients is far from done (that is, unless Twitter adopts changes that will make it impossible for developers to keep creating third-party tools), and we just need to keep looking to find the next app that may, in some way, improve the way we share information on Twitter from a smartphone or tablet.

Late last week, I stumbled upon TweetFire per Josh Hellferich’s recommendation. TweetFire is free on the iPhone, but it’s got a $3.99 in app purchase to unlock multiple accounts and remove ads, and get all the future “premium” features for free. Additionally, TweetFire also has a $0.99 in-app purchase to buy a notification sound pack. TweetFire isn’t a typical Twitter client: the app doesn’t run on the iPad, and more importantly it lacks the common implementation of unified timelines for people you follow, mentions, DMs, searches, and so forth. Instead of displaying a single view for your Twitter account and break it into tabs, TweetFire uses a grid of icons to let you access your own tweets, your timeline, mentions, DMs, favorite tweets, searches, lists, and users’ timelines. 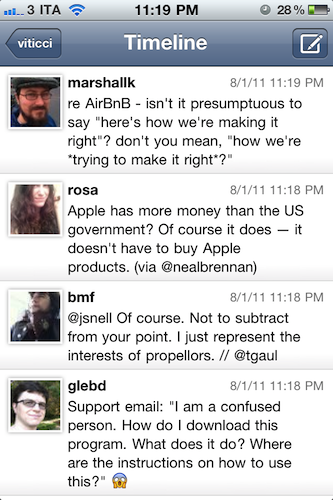 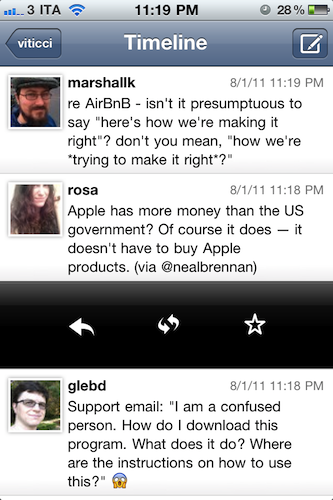 Why displaying Twitter sections on a grid, when the iPhone has proven to be so successful in organizing information with tabs? Because TweetFire is built with speed in mind. Whereas most Twitter clients upon launch take several seconds to load your timeline, mentions, and DMs, TweetFire’s grid concept allows you to, say, load your mentions only and avoid refreshing the main timeline. Same applies for DMs, a saved search, or tweets from another user. When you select an item from the grid TweetFire will only load that item, also pulling a series of tricks to give the illusion of a fast refresh, while the app is in fact still loading tweets. For instance, profile pictures will be loaded after tweets, as the app displays a default avatar for Twitter users first. Also, there is no timeline gap in TweetFire, which means you won’t be able to go back in your timeline, and the latest tweets will always be fetched.

The lack of timeline gap detection and the overly simplified interface for dealing with tweets and direct messages leads me to believe TweetFire has been developed more as a Twitter companion, rather than a full-featured client. And that’s perfectly fine: if I can be considered a “geek” or a “Twitter power user”, then I can say TweetFire won’t make it when it comes to loading 6 hours of tweets and interact with my followers or interesting content I need to save and share. That’s why I, personally, call it a companion app for Twitter that can sit alongside my Tweetbot. But for all other users, those who don’t stay 24/7 on Twitter and only check on their timelines a couple of times a day, TweetFire provides a new approach with speed in mind and the focus on gestures that might as well replace an old default client. 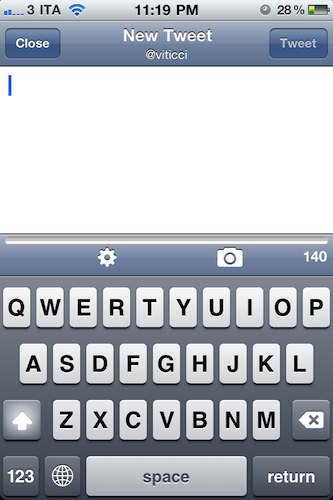 The more sections or users you add to your TweetFire homescreen, the more you can swipe back and forth to navigate. TweetFire allows you to swipe on the title bar to move to the next “grid item” (say from mentions to DMs), and the developers have also built a series of tips into the app and listed them on their website to detail how users can interact with the app using gestures. TweetFire also has a standard “swipe to reveal” menu for tweets to quote them, retweet them, mark them as favorite, and reply to the author, although the implementation is far from Brichter’s smooth animations in Twitter for iPhone. TweetFire indeed lacks the polish of apps like Twitterrific and Tweetbot, something I immediately noticed when trying to compose a new tweet and looking at the ugly slider next to the word count. The same compose screen places icons for camera access and link shortening above the keyboard but below the aforementioned slider – I’m not sure I like this choice. However, the shortening button has an additional option to “finish a tweet in Twitter”, which will open the official Twitter app if installed.

TweetFire’s UI design shows a huge opportunity for improvement in the grid itself – I don’t like the design of the yellow section icons and when you add a user to the page, the profile picture isn’t optimized for the Retina Display. 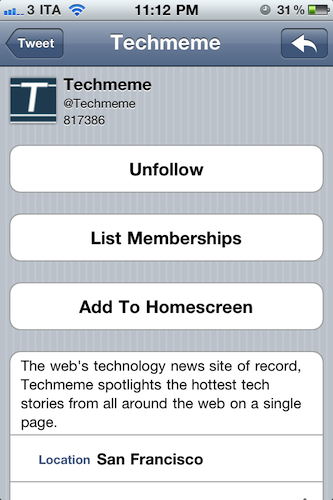 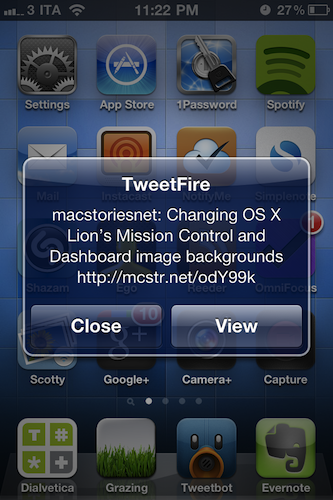 This brings me to my favorite feature of TweetFire, and the reason why I’ll keep using the app in spite of a not-so-lovable UI, lack of “power user features”, and bad timeline detection behavior: you can add users or lists to the homescreen, and decide to receive push notifications every time a specific user tweets. List can be managed from the app’s settings, whereas users can be added to the homescreen from anywhere in TweetFire – just open the single user view and tap “Add to Homescreen”. Once a user is on the homescreen, you can configure push notifications with sounds for every new tweet coming from that user. This is especially useful for me as I need to stay on top with tweets from @macstoriesnet when I’m not logged into our team’s chat, and my co-workers can’t tell me in real-time when a new post is going live. Tweefire’s push notifications have been stable in these past few days in that every time @macstoriesnet tweeted, I got a push notification. I also noticed TweetFire’s push service for user tweets is faster than Prey Fetcher, a service I configured with Prowl last week. Too, TweetFire can notify me of multiple users at once and send me notifications for mentions, though DMs haven’t been implemented yet (which isn’t an issue as I’ve got Tweetbot anyway).

The settings of the app offer more control over how notifications are sent: you can pause all notifications, mute them, and select “quiet hours” so you won’t be disturbed by your iPhone and TweetFire’s (optionally custom) notification sounds.

TweetFire isn’t as full-featured as other Twitter clients you can find on the App Store, and its design will leave many disappointed. However, its speed combined with being able to get instant notifications for any user I follow and direct Lists access from the homescreen have turned out to be improvements to my daily workflow that I’ve enjoyed using alongside my main Twitter client, Tweetbot from Tapbots.

You can download TweetFire for free on the App Store.