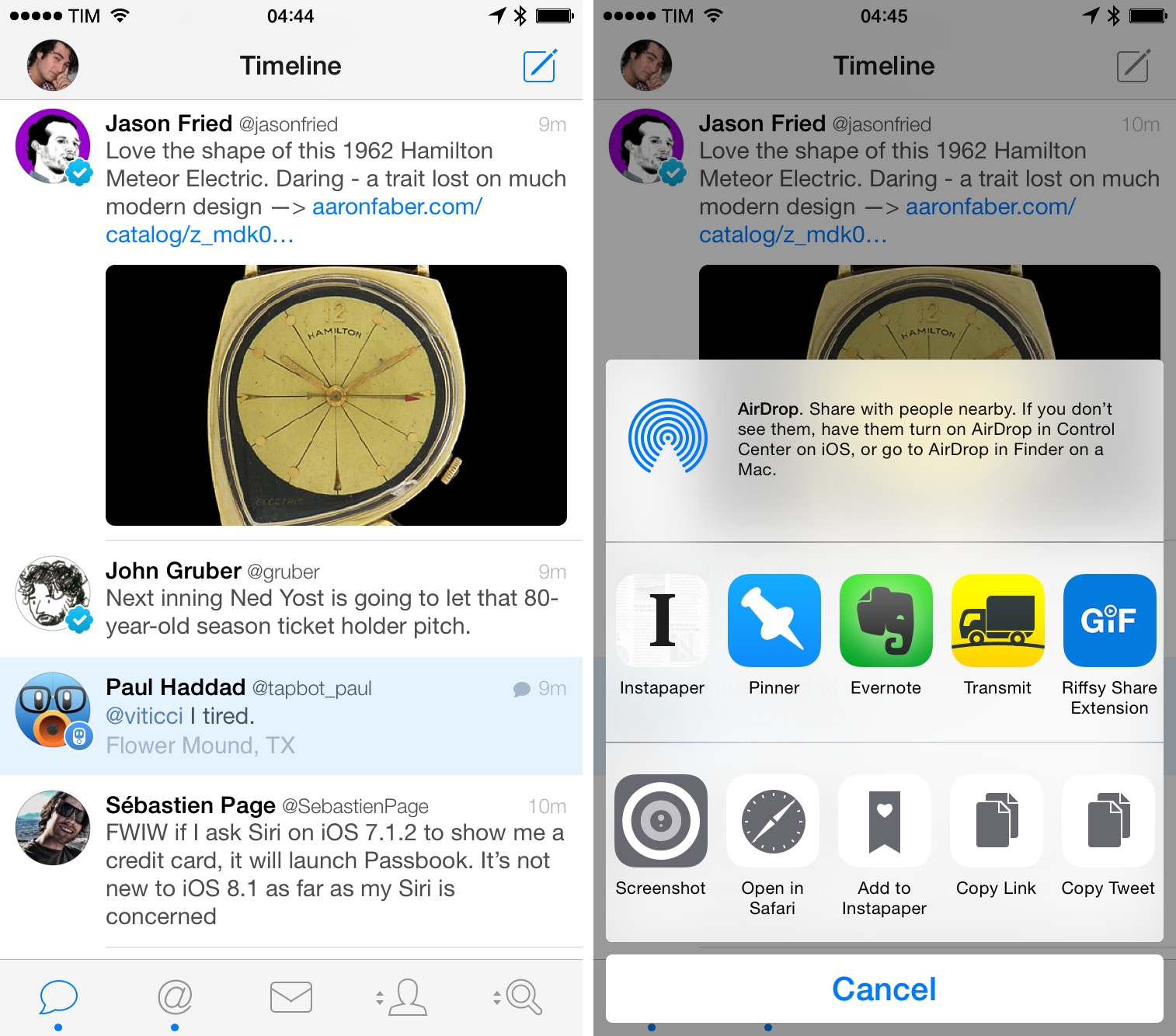 For the past two months, I’ve been switching back and forth between Tweetbot and Twitter’s official app for iOS in a personal quest to understand what’s the best Twitter client for me today. Tweetbot 3.5, available today on the App Store, has given me the biggest incentive to keep using Tapbots’ app yet: integration with iOS 8 extensions in my Twitter timeline.

Tapbots’ foray into iOS 8 is, on the surface, unsurprising: Tweetbot 3.5 has received layouts optimized for the iPhone 6/6 Plus and, like the official Twitter app for iPhone, interactive notifications. 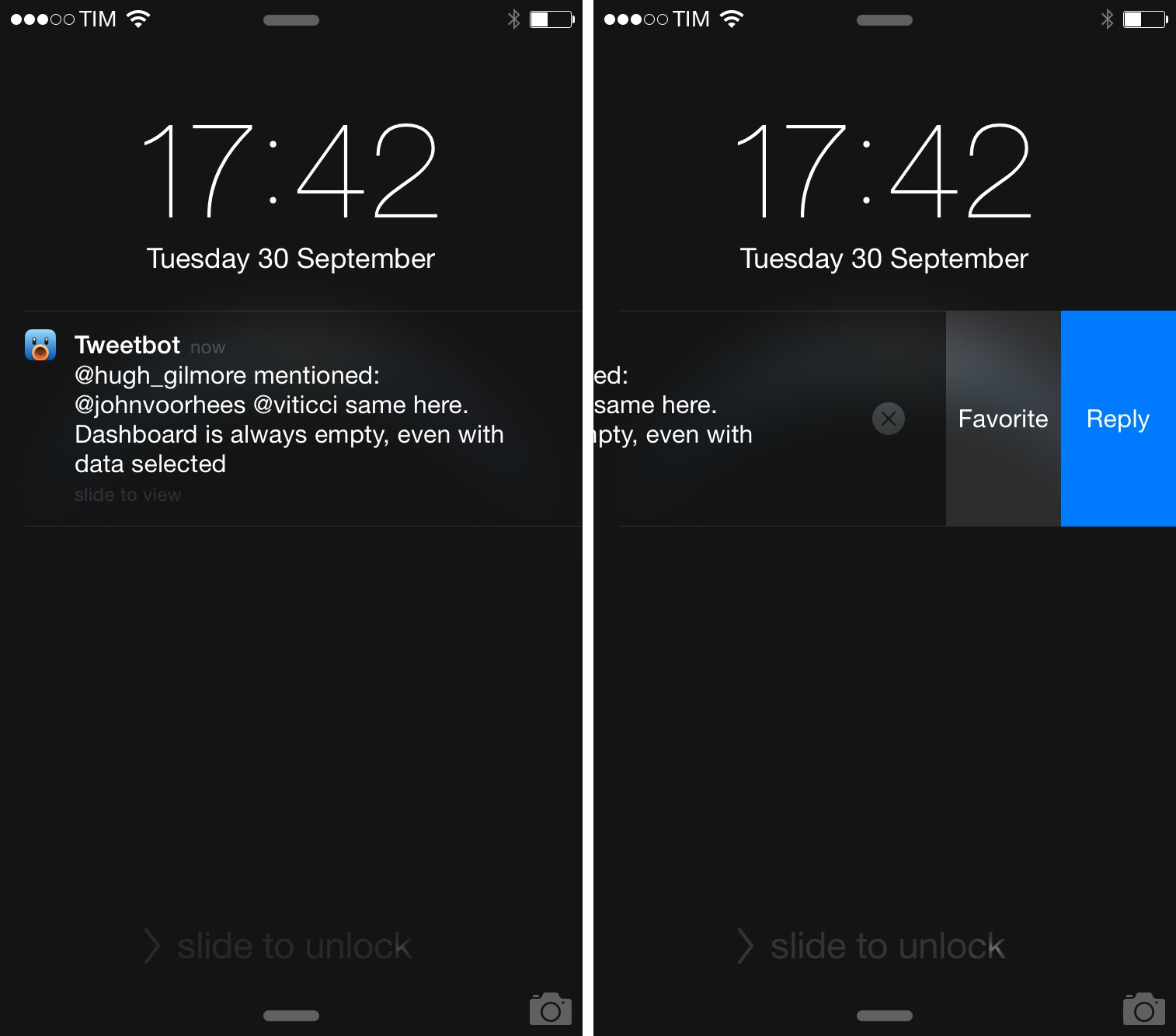 Tweetbot 3.5 looks great on the iPhone 6, and its new notifications allow me to quickly mark a tweet as favorite without opening the app. Unfortunately, third-party apps can’t access the quick reply feature found in Apple’s Messages app: like Twitter, tapping the Reply button in a notification won’t let you reply immediately but it’ll take you to Tweetbot instead.

From a visual perspective, Tweetbot 3.5 looks and works the same, keeping the foundation that Tapbots introduced with Tweetbot 3 last year. The app hasn’t changed considerably – it has evolved in expected ways and within the limitations imposed by Twitter’s API for third-party apps.

What’s changing today in Tweetbot is the action menu for tweets and links. With iOS 8, Tapbots has decided to fully embrace extensions (abandoning the custom contextual menu they had built for Tweetbot 3) by switching to Apple’s share sheet for action and share extensions. Every time you tap & hold a tweet/link or hit the share icon in your timeline or a web view, Tweetbot 3.5 will open the iOS 8 share sheet.

I probably spend too much time on Twitter, but I can’t deny that the people and websites I follow give me a consistent amount of interesting links I use for articles, MacStories Weekly, and podcasting. I discover apps, products, and great reads thanks to Twitter, but neither the old Tweetbot or Twitter’s app allowed me to act on those links right away with no friction. Tweetbot featured support for Instapaper, but its integrations stopped at read-later services. Over the years, I developed a habit of marking tweets I found interesting as favorites so I could later go through all of them and manually bookmark them on Pinboard, add them to Evernote, or save them to other apps. I turned Twitter favorites into an inbox because it was hard to share links quickly on iOS.

In testing Tweetbot 3.5, I’ve noticed that I now tend to use Twitter favorites less as temporary bookmarks and more as real favorites for tweets I like. With extensions available in my Twitter timeline, I can quickly save links to Pinner, archive them in Evernote, and even pin Twitter photos to Pinterest – tap & hold a tweet with photos, bring up the Pinterest extension, and it’ll scan the tweet for images. 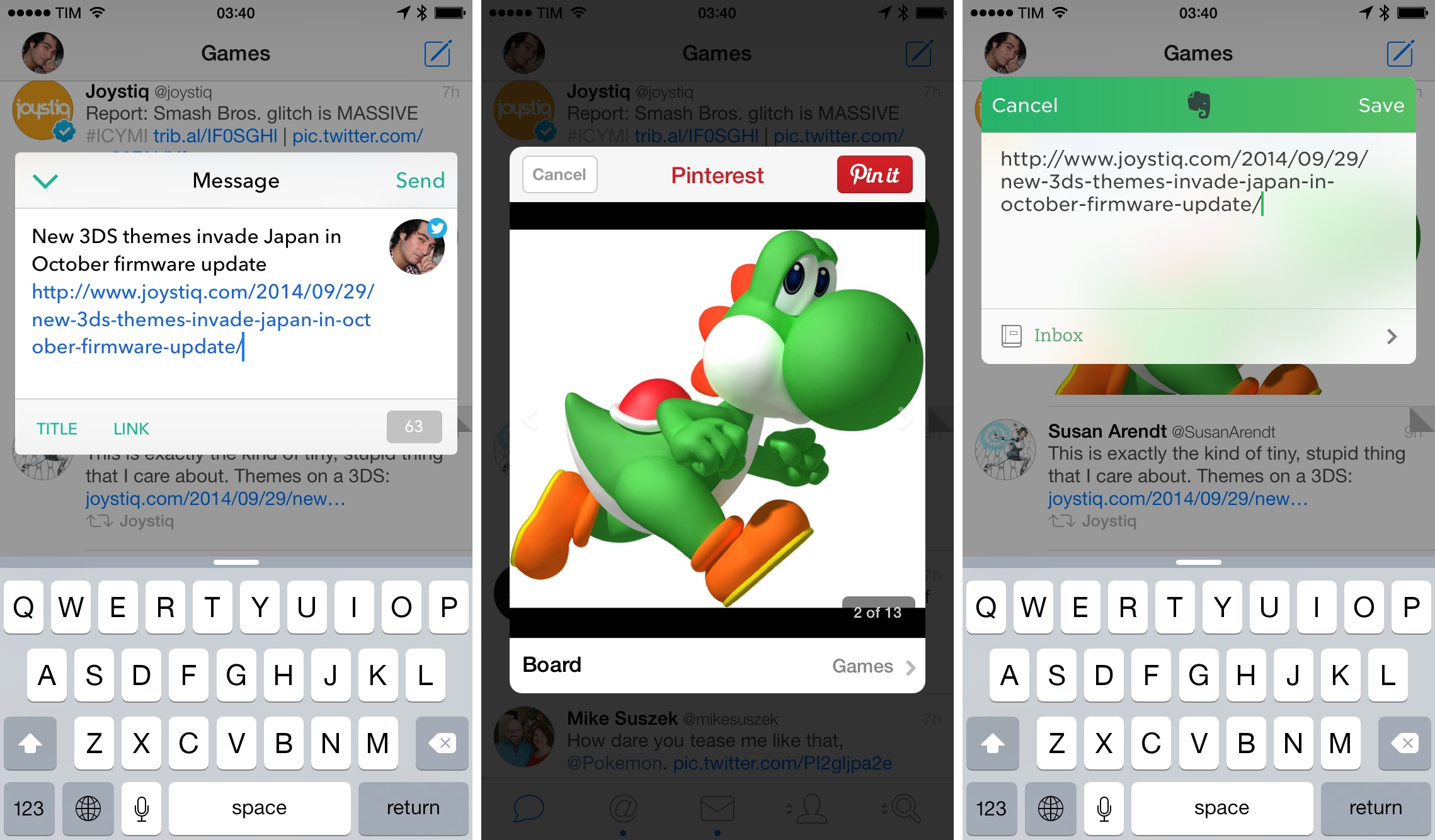 Any read-later app can now be integrated natively with Tweetbot thanks to the share sheet. If you follow recipe blogs, you could use the AnyList extension to save recipes to your account without leaving the app. I can tweet with Linky’s tweet panel inside Tweetbot if I want – a testament to the democratization of app features that extensions bring to iOS 8. Tweetbot has always been better than Twitter’s own app for opening webpages thanks to non-modal web views, but extensions take Tapbots’ app to the next level for processing tweets and links.

That, of course, comes with some trade-offs. Here’s one minor design detail that I mentioned in my review of Tweetbot 3:

If you tap & hold a long URL in the timeline, the contextual menu will intelligently resize the URL’s text to make it smaller so that you’ll be able to read the full URL without cut-off parts.

I used that feature all the time to understand if URLs were worth opening or not, and it’s gone in Tweetbot 3.5. Extensions can only be activated from the share sheet, and Tapbots can’t add a URL preview to it as it can’t be modified by apps. I loved that little feature, but from a user’s perspective having full access to extensions trumps the attention to detail for tap & hold on URLs. Thankfully, Tapbots is injecting its own buttons into the share sheet: my beloved “Copy link to tweet” is still available in the row dedicated to action extensions. 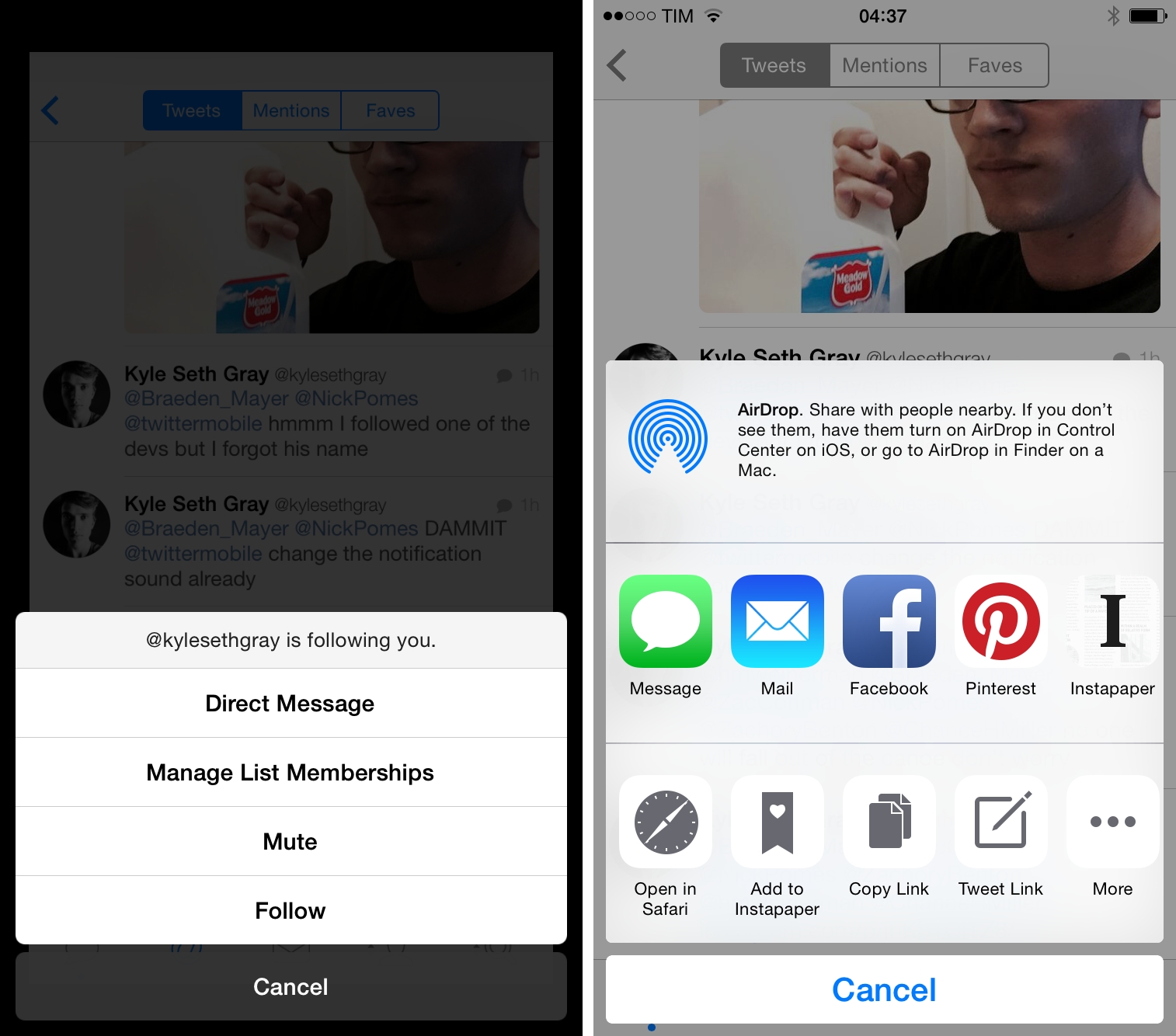 The second minor issue with extensions is consistency. Because of Apple’s implementation of extensibility in iOS 8, Tweetbot now comes with two distinct action menus: the Tapbots one, and the share sheet. This isn’t a deal breaker, but it stands out in an app whose design has been carefully considered.

Unfortunately, support for extensions hasn’t been added in the opposite direction: you won’t find a Tweetbot share extension that lets you send tweets with Tweetbot from outside the app. Linky proved that more powerful share sheets can be added to iOS, but Tapbots decided to go with the safest option for this 3.5 release. I would like to see further experimentation with extensions and Tweetbot in the future – integration with the native document picker to choose files and share them with Tweetbot would be, for instance, a fantastic addition for power users.

In the months I’ve spent using the official Twitter app for iPhone, I’ve enjoyed several features that aren’t available to third-party apps. Interactive Cards, the redesigned profile view, sync of DM read status, and the Discover tab were much better than I expected them to be, and I wish that third-party apps could get access to all of these features.

And yet I keep coming back to Tweetbot for the little things. Timeline sync with Tweet Marker, which allows me to comfortably read every tweet; easier access to Favorites with customizable tabs; the ability to switch my timeline to a list. And now, with version 3.5, action and share extensions for tweets and links. Tapbots may not be at the forefront of Twitter innovation because the company doesn’t let them, but Tweetbot still is a great client graced by a thoughtful design and, thanks to iOS 8, the kind of flexibility that can’t be found in Twitter’s app for iOS.

Tweetbot 3.5 is available on the App Store.