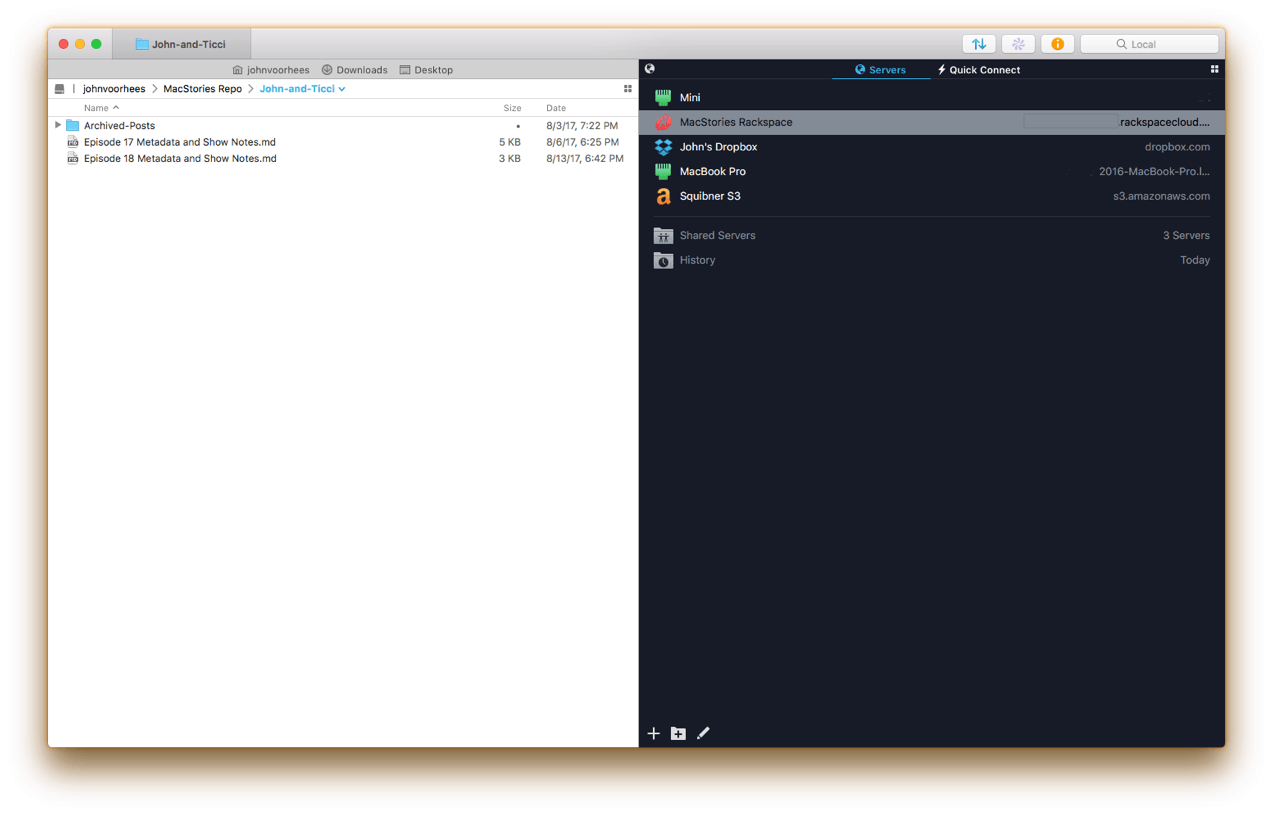 If you’ve used a Mac for a while, you’ve likely come across Panic’s file transfer app Transmit. Not long ago, I would have probably still described it as an FTP app even though it’s handled things like Amazon S3 file transfers for a while. However, with the recent release of version 5, Transmit for macOS has become much more than an FTP client adding support for ten cloud services. Moreover, Panic has taken the opportunity to rewrite its file transfer engine so that it’s faster, tweak virtually every feature, and update and streamline the app’s design. The result is an all-new Transmit that is both familiar and more capable than ever before.

Despite adding support for ten cloud services, Transmit remains just as easy to use as ever. Local files are on the left and servers are on the right. Drag a file from the left to the right to initiate an upload. It couldn’t be simpler.

It’s Transmit’s ease of use that has always appealed to me the most. My day-to-day needs for an app like Transmit have been fairly light, so I appreciate that it’s simple and fast to set up a server and transfer files. That said, the addition of support for services like Backblaze B2, Rackspace, Dropbox, Google Drive, Box, and One Drive has opened up some interesting new possibilities that I expect will greatly expand my use of the app. 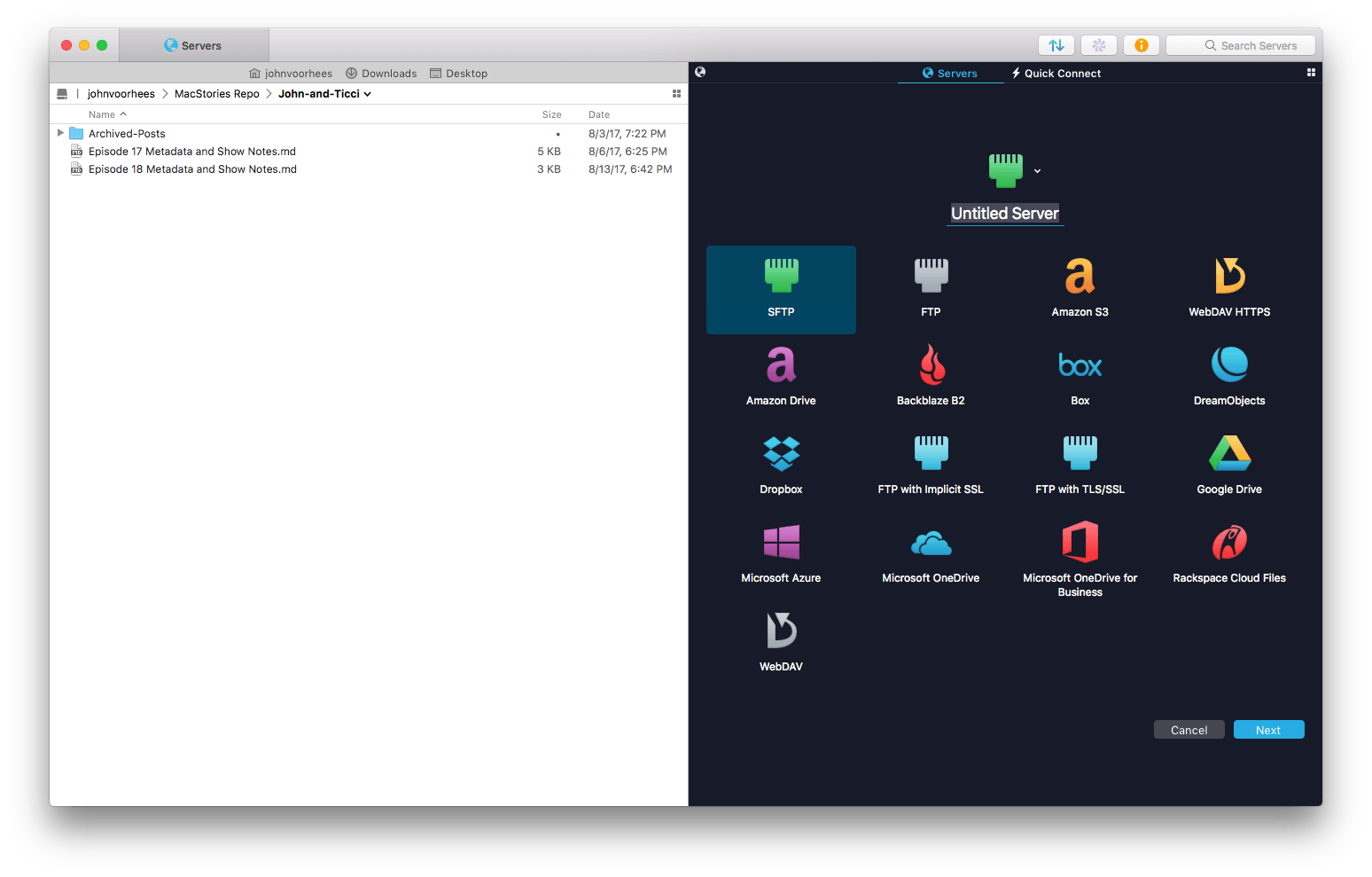 For instance, images on MacStories are hosted on Rackspace. I typically use a custom web app to upload images that are compressed with Kraken.io and then uploaded to Rackspace, but I’ve already found Transmit to be a much faster way to upload images. Transmit has the added benefit that I can upload several screenshots at a time and then quickly copy the URLs and drop them into an article. The next step is to automate the process so that dropping a screenshot in a folder sends it to Kraken for compression, uploads the new image to Rackspace, and places the URL on my Mac’s clipboard.

The possibilities with services like Dropbox, Box, or Google Drive are interesting too. Say you have multiple Dropbox accounts like one for work and the other for home use. With Transmit, you can be logged into both simultaneously and access both sets of files. Plus, if you have a Mac that doesn’t have much storage, you can selectively sync Dropbox your Mac, but still, access all the files through Transmit.

The expansion of Transmit’s support for cloud services will have the greatest day-to-day impact for most users because of the flexibility and convenience it adds, but there is much more in version 5. Panic rewrote its file transfer engine from the ground up to make it faster. I haven’t tested the update side-by-side with the last version, and keep in mind that I don’t typically transfer more than a handful of files at a time, but transfers do feel faster than before. 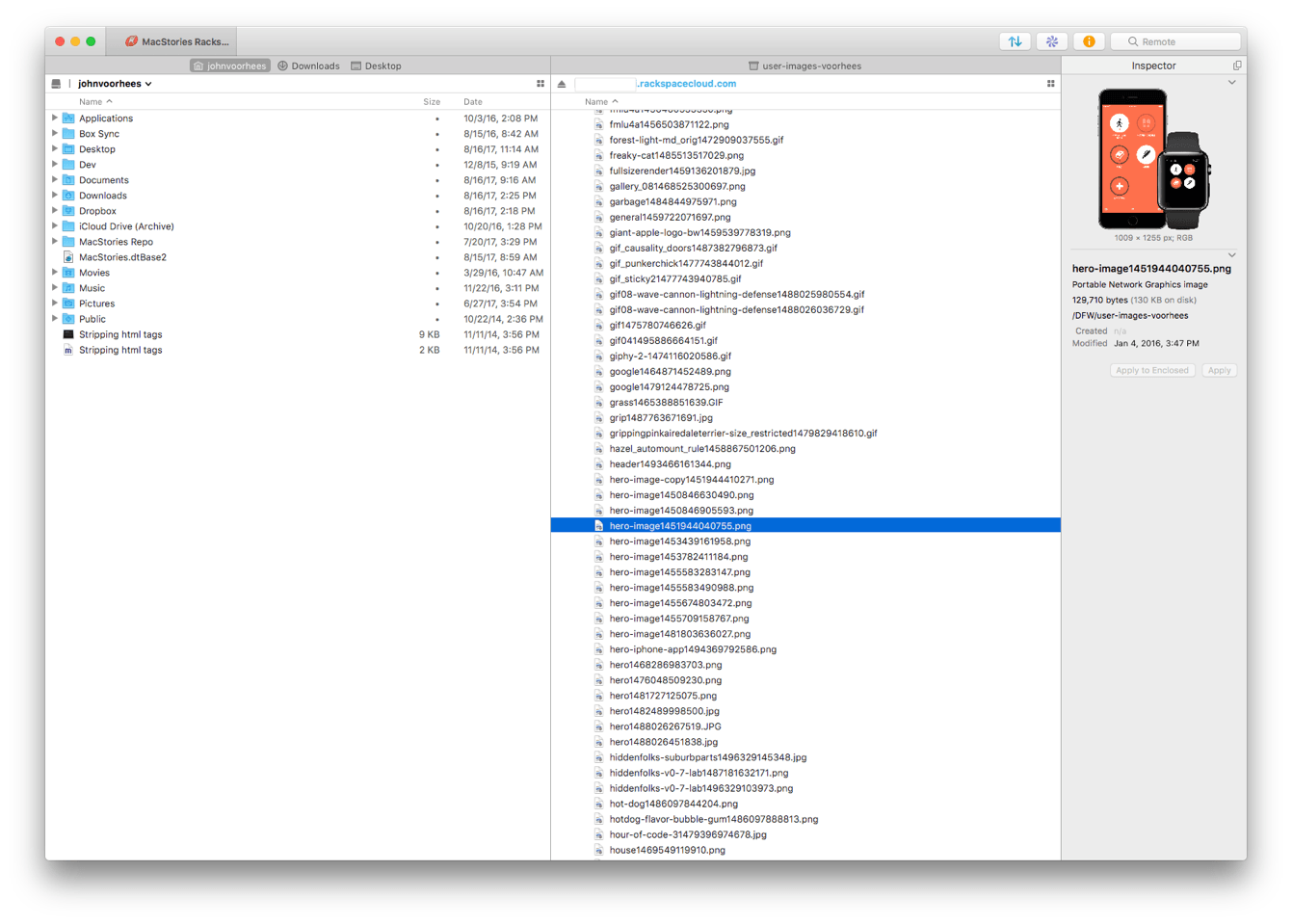 Transmit also includes Panic’s custom sync service. With Panic Sync, servers you set up on one Mac or in Transmit on an iOS device are copied to all of your other devices that are signed into the service saving you the trouble of setting up the same server multiple times. One side effect of Panic Sync is that I can see my new Rackspace and Dropbox setups in the iOS app, but neither is supported by the iOS version, which is too bad. Hopefully, support for all of the new cloud services is in the works for Transmit’s iOS app too.

With File Sync, you can also designate local folders to sync to servers and vice versa. I’m using File Sync as an extra layer of backup protection for my most important MacStories project folders, which are now in at least five places, only two of which are in the same physical location.

The refinements to Transmit don’t stop there though. Nearly every aspect of the app has been tweaked in some way or another. The hundreds of little changes make it hard to point to any one thing that makes a big difference, but together they give Transmit a fresh look and feel that is a pleasure to use. I particularly appreciate all the little design adjustments. There is less chrome and more information at your fingertips with things like the file information inspector panel, which makes the app easier to use than ever.

Users’ file transfer needs have expanded with the growth of cloud services. It’s no longer enough to simply support FTP and SFTP transfers. By adapting Transmit to accommodate more cloud services and reevaluating and improving scores of existing features, Panic has laid a strong foundation for the app to remain a premier file transfer utility for many years to come.