We’ve gotten used to think that FTP applications should be simple, highly functional and powered by outdated and ugly user interfaces. Some people seem to think that a good FTP client is that app that comes with hundreds of features and doesn’t care about design principles and good practices just because it has to be functional, and functionality doesn’t play well with the eye candy. I think that an app meant of power users doesn’t have to exclude a great Mac-like UI design from its list of features- it’s the contrary: a full featured and complex app should find the right compromise between design and features.

It’s quite difficult to approach Transmit 4, the latest release from Panic, considering that is an application that comes with an immense amount of hype, possibilities and commands, being specifically meant for people who do file transfers like they drink water. Put simply, Panic has just released the ultimate file transfer app for Mac OS X. But delving deeper into it, there’s so much more to talk about. 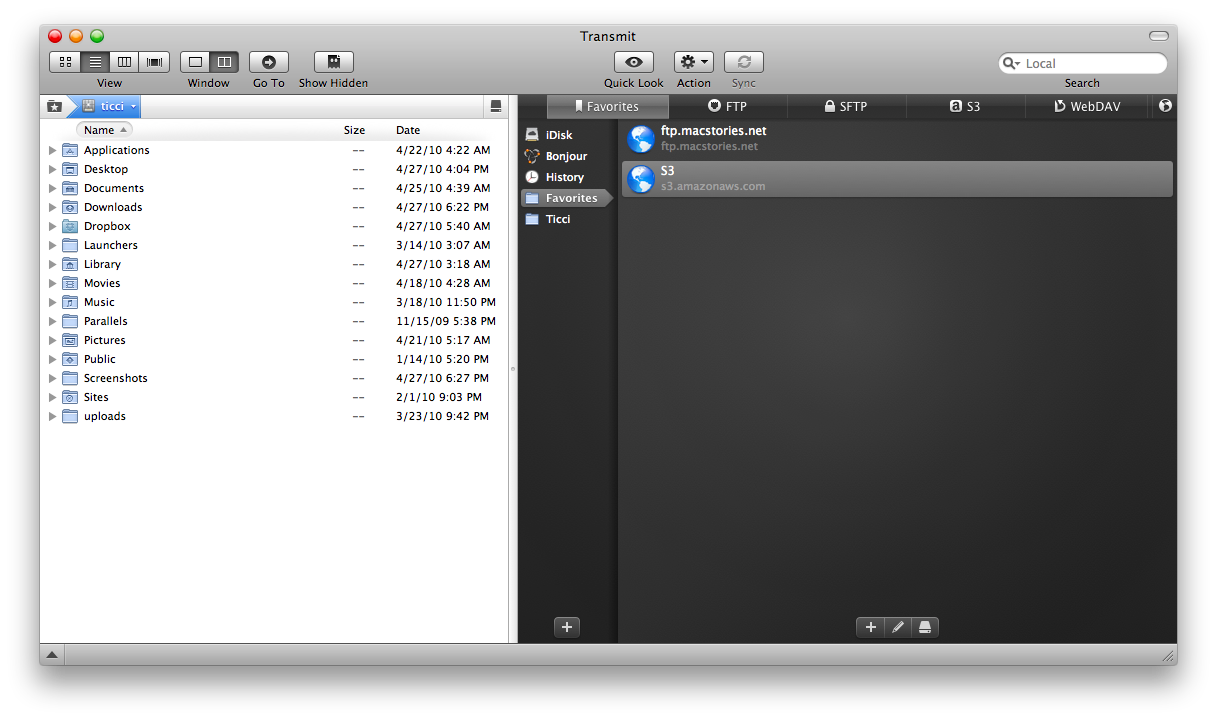 Let’s talk about the interface and forget about it: Transmit 4 is almost perfect. I say almost because perfection doesn’t exist, so my almost is a symptom of something that truly stands out and, basically, has no competitors. It’s beautiful, it’s full of details to the last pixel, it’s intuitive. I don’t think I’ve seen such a great looking piece of software gracing my Mac recently. I can say right now that Transmit 4 is the app that should win an ADA this year, without any doubt. It’s one of those applications you can’t really understand and appreciate until you try it, and I hope the screenshots in this review will help you in getting a fair visual overview of what Transmit 4 looks like.

Transmit 4 allows you to connect to FTP, SFTP, S3 and WebDAV servers but I’ve only tested FTP and Amazon S3 access so far, so if you have thoughts and feedbacks about the other ones feel free to drop a comment below. The main screen of the app is the Favorites section, where you can indeed add some favorite connections, those that you think will use more frequently than others. The layout here, and in the rest of the app as well, is a two columns one, with your local files on the left and the actual connection on the right. If you come from another context like, say, Interarchy or Cyberduck you can switch to a single window layout by pressing a button in the toolbar or selecting  View > Show One File Browser. Honestly, even though I’ve been using and loving Cyberduck for years now, I decided to stick with the two columns layout because it gives me a better overview of what a) I want to do locally and b) where I have to upload my local files. It’s very comfortable and it fits perfectly in my workflow, which is good. The left panel also provides some good file management functonalities, so that I don’t have to fire up the Finder just to do some basic stuff like navigating through folders or labeling files. Integration and consistency, that’s what Panic had in mind when developing this huge update.

Back to the Favorites screen, let’s see how you can add new connections and manage them. First, it’s worth mentioning that you don’t have to necessarily add a new server as Favorite, but you can also choose the FTP tab and connect to a server without adding it to your Favorites. This “Quick FTP” screen contains however fewer options than the Favorites’ one: when adding a Favorite you can choose a destination folder, enable the Dock Send feature (which allows you to drag files and folders from a specified local path to the Transmit dock icon and see them mirrored to the server) and create a Droplet to use in the Finder. The Droplet function is just great, it’s a huge time saver. Also, you can create folders for Favorites, see your History and check for Bonjour devices, but the cool thing is that if you want to do some serious file management before uploading to your server, you can click on the globe icon in the top right corner and have two panels for local files, pretty much like Path Finder. Then, if you change the view from List to Thumbnails (⌘ + 1) you’ll have a perfect copy of the Finder, right within Transmit. Let me say that this is awesome, and I haven’t seen any other implementation like this. But it doesn’t stop here: you can open tabs, change the background color of the local files windows, change focus via click or keyboard shortcut, show invisible files and file counts, refresh and fire up Cover Flow. Play around with it (a free trial is available) and you’ll see why Transmit 4 is the most flexible and yet easy to use app of its kind you’ve ever tried. Hands down.

A feature that local and remote files have in common is Places: how many times have you wished to be able to create shortcuts to your most used remote folders in a FTP client? And you had to manually go through all that navigation every time - yeah, it was a real pain. Not anymore. With Places you can add as many shortcuts to folders as you want, so that you’ll just have to click twice to open that damn hidden Plugins folder. The realization is delicious: a translucent window slides out from the Places button, revealing the folders inside it, while to add new ones you just have to drag them over a light purple bar you can dismiss at any time. All of this happens in the main navigation bar, which for instance also features smart breadcrumbs that support gestures and dropdown menus to accelerate and simplify navigation. 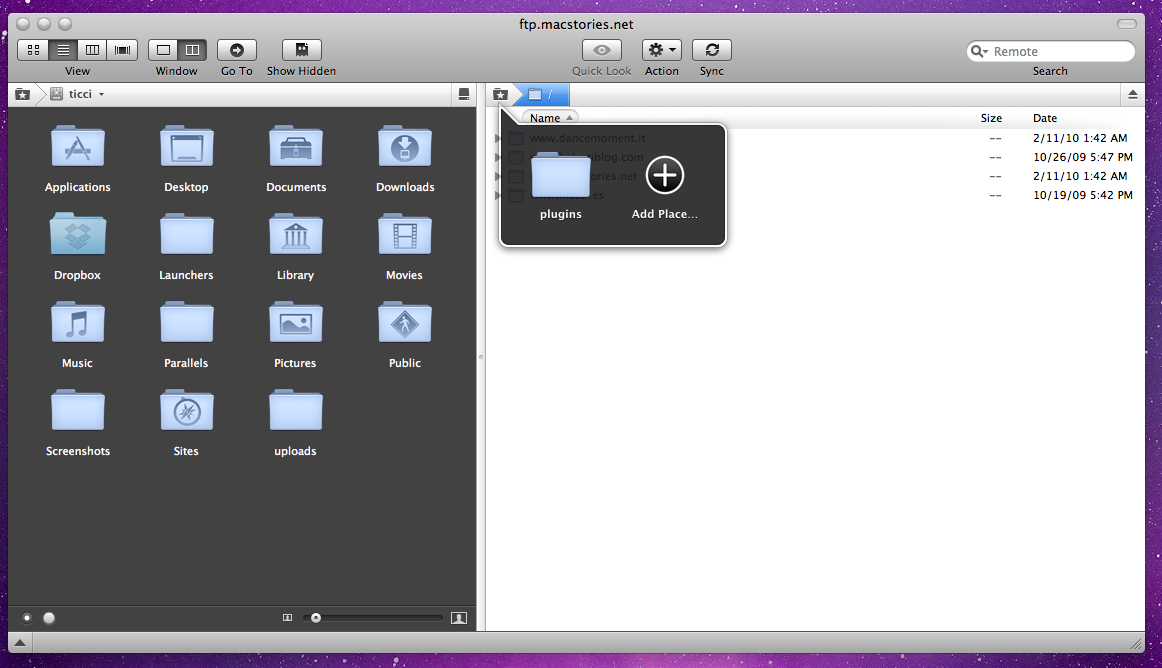 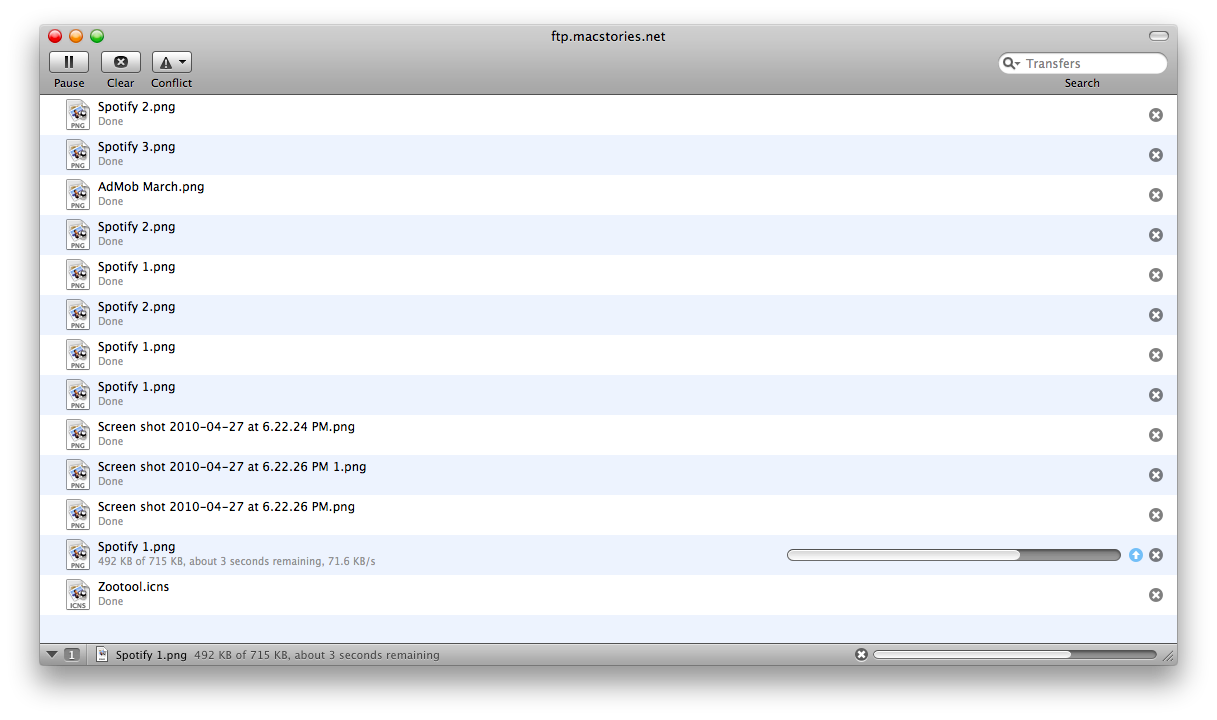 Transferring files is simple and straightforward, and there aren’t tabs or dialog menus that get in the way like in others FTP apps - there’s just a progress bar in the bottom right part of the window and that’s it. I also appreciated that Transmit 4 no longer transfers a group of files one file at a time, but uses a multi-connection system based on your connection limits. Cool. 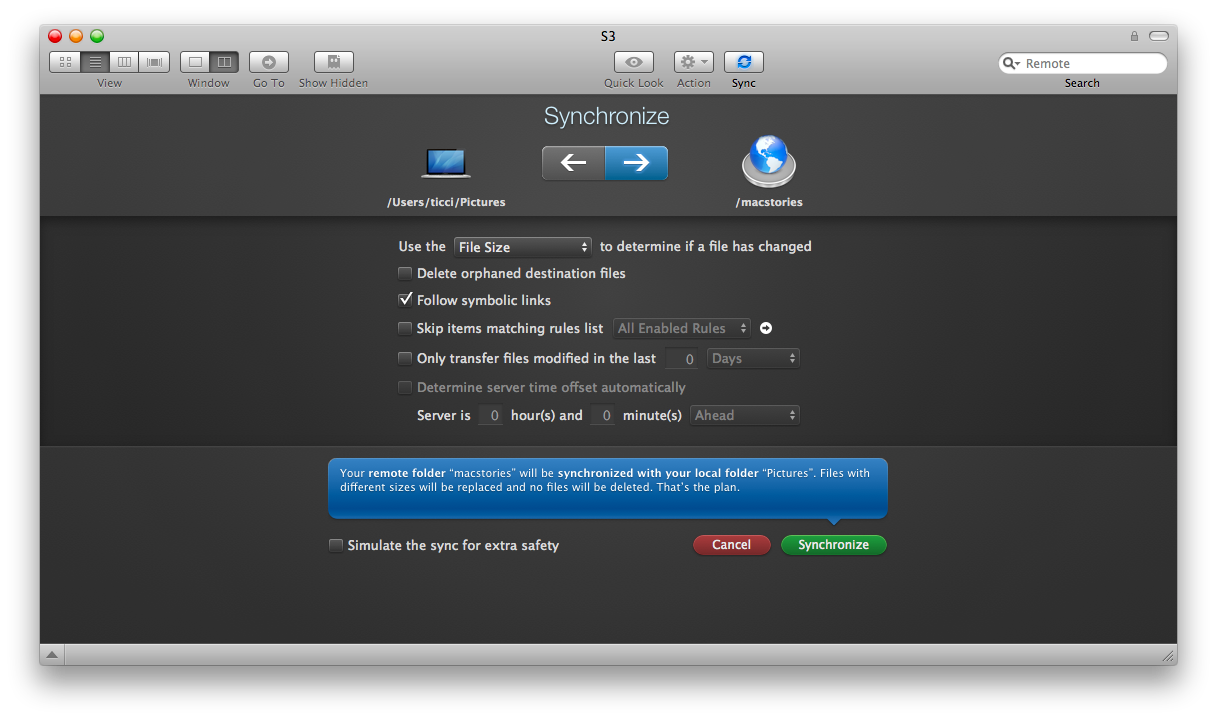 Last, Transmit 4 features two welcomed new features: Transmit Disk and Sync. Sync is great, as it basically lets you pick up two folders and sync their contents. Think of it as the built in Panic’s solution for backup and server copies, considering that it also works with Amazon S3 and, guess what, I’m using it to backup my entire photo collection. Transmit Disk on the other hand brings your remote files to the Finder itself: you can now mount any of your favorites right into the menubar or the Finder’s sidebar, even when Transmit’s not running. Again, you’ll save lots of time with this.

One could take a look at all the single features of Transmit 4 and say that Panic really put a lot of effort in creating the most complete and fast FTP client for Mac, but I think what matters is that Transmit 4 is ultimately aimed at refining and making your workflow just better. It’s the mix of those features that makes Transmit 4 stand out from the crowd, and if it’s the feel of an app that counts - I guess it’s safe this is even more than a feeling. It’s the best, and you don’t need anything else.

Transmit 4 is what we love about Mac OS X.