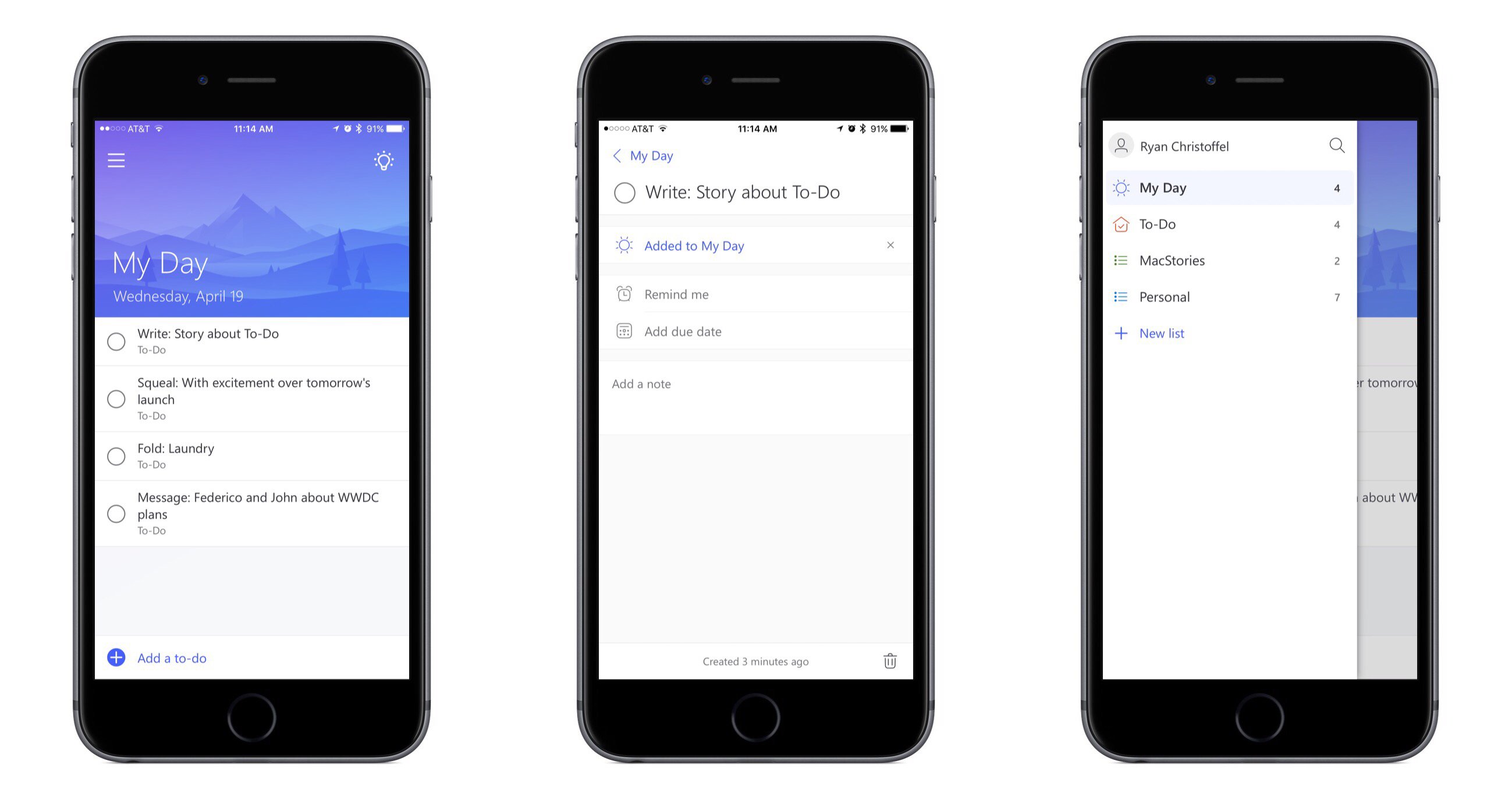 Microsoft To-Do is the official successor to Wunderlist, the popular task management app acquired by Microsoft in mid-2015. Microsoft unveiled To-Do today in Preview, which is essentially a public beta. The service is built on Office 365 technologies, but according to ZDNet it is available to anyone with a Microsoft account; Office 365 is not required.

To-Do launches today on several major platforms, including iPhone, Android, Windows, and the web. Unfortunately iPad and Mac versions are not available at this time, but Microsoft says those apps will be available in the coming months.

After spending some time with To-Do on iPhone, my initial impressions are that it’s a beautiful, simple task management tool that very much feels like a worthy successor to Wunderlist.

To-Do is perhaps the best looking task management app I’ve ever used – though the upcoming Things 3 may steal that title. Each list you create is topped by a beautiful header image and can be customized with a different theme. Text is crisp and clear and colors are pleasant tones. The animations for checking off tasks and navigating the app bring delight to the task management experience.

The level of complexity with To-Do resembles that of Wunderlist. It’s extremely quick and easy to add tasks to a list, and if you need to add things like reminders, due dates, or notes to a task, you can do that by tapping on it. Currently To-Do can’t do everything that Wunderlist can, such as adding attachments to a task or creating subtasks, but those things may be added in the future. Microsoft has already stated that they plan to add list sharing features soon. 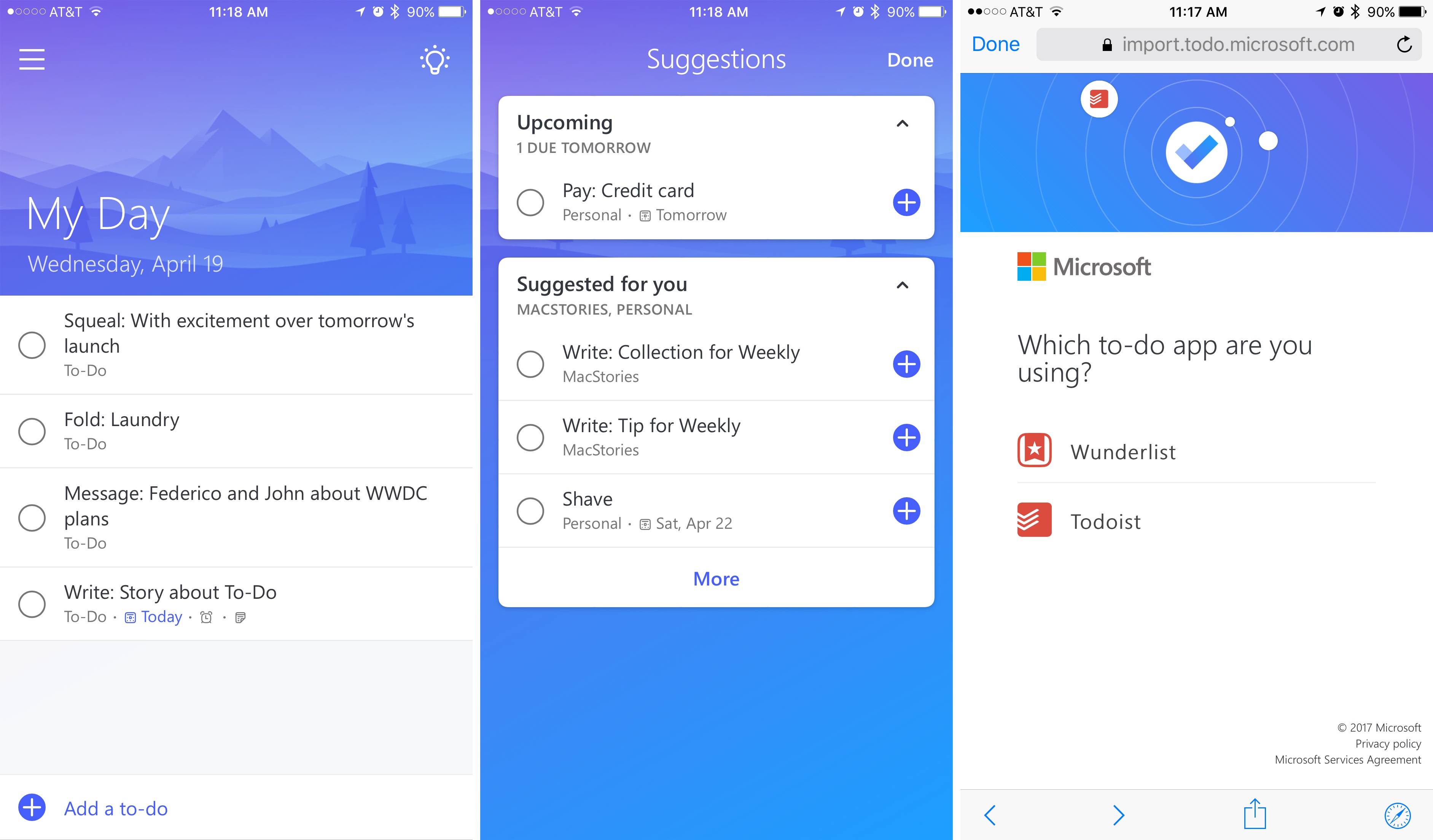 Although the app is very simple overall, one key feature that makes it stand out is Intelligent Suggestions. These are tied to the primary list in To-Do, called ‘My Day.’ In theory, this list should be empty every morning when you check it (assuming you completed yesterday’s tasks). An empty list provides you the chance to daily determine which tasks you’ll tackle in the new day and which you won’t; this kind of starting-from-scratch approach is where Intelligent Suggestions come in. Tapping the lightbulb icon in the top-right corner of My Day will bring up a list of suggestions for tasks that you can quickly, easily add to your My Day list. The tasks that you’ve assigned due dates to won’t automatically be added to My Day when they’re almost due, but they will show up at the top of your Intelligent Suggestions alongside other tasks that To-Do believes you may want to complete today. It’s an interesting, clever twist on the classic ‘Today’ list in other task management apps, allowing you to plan your work with intention and purpose each day.

Another feature worth mentioning is the task importer Microsoft has built. From To-Do’s settings menu you can import tasks directly from Wunderlist or Todoist. The importer contains several options so that you can import either all or just some of your tasks from those other services. I used it to import tasks from Todoist and it worked seamlessly.

Alongside To-Do’s release comes the unsurprising news that Wunderlist will be retired at an undetermined point in the future. From the company’s announcement post: “Once we are confident that we have incorporated the best of Wunderlist into To-Do, we will retire Wunderlist.”

To-Do will likely not be an adequate replacement for more powerful task management systems like OmniFocus or Todoist, but for those who want something simpler, Microsoft is off to a great start with To-Do. And this truly is just the start; Microsoft announced that they plan to integrate the service into other Office 365 products, such as Outlook.

Whether you’re an Office 365 user or not, To-Do is definitely worth a look.

Microsoft To-Do is available on the App Store.