Sometimes developing and releasing a new application it’s just about good timing. You can’t be sure if your app will succeed and become a blockbuster because you can’t tell if time will be your friend, or your opponent. Most of all, you don’t know if your enemies will get in your way with something similar to what you’re developing at the same time. So yeah, sometimes it’s just about timing. But sometimes - most of the times, actually - having a really good application ready to be launched is what really matters. “Good applications always get noticed”, someone once said. Maybe he was right, maybe he was just too optimistic.

But what happens in the middle? What if you just launched a good application but timing was not so good? Even worse, what if your app gets noticed by less people than you expected?

Hell, let me talk about Syncopy. 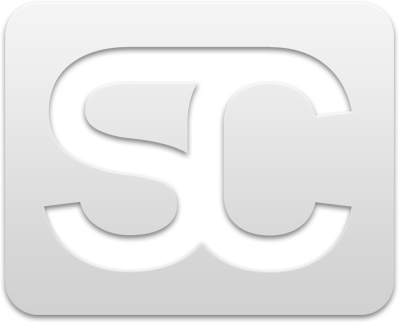 Syncopy by Syncode (nice name, huh?) comes as an iPhone app and a Mac app. It basically lets you share your Mac clipboard across different Macs and let it flow to your iPhone as well. Simple and effective. The Mac app is a free download, while Syncopy for iPhone comes at $0.99 at the App Store [iTunes Link]. Once you’ve downloaded the Mac utility and created a free Syncopy account (you just need a valid email and a password), fire it up and you’ll notice that the app runs in the menubar waiting for you to copy stuff into your clipboard. By default, Syncopy for Mac doesn’t automatically get every item you copy, but - trust me - I highly recommend you to turn on the “Automatic Sync” which syncs everything to the cloud. It doesn’t require a lot of memory and it won’t suck all your bandwith. And you know, my internet connection is not that fast, so you can be sure about that. 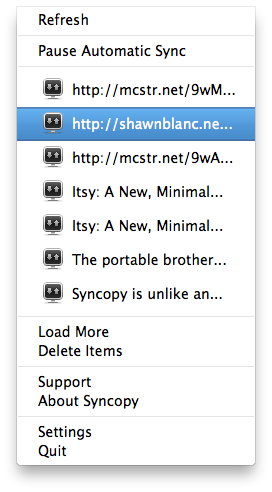 While the Mac app is simple and works just fine, I wish there was more stuff you could do with it. For instance, there’s no support for QuickLook (a là Notify), no support for Images (much like Clipmenu or other clipboard utilities) and doesn’t let you edit stuff you’ve uploaded to the cloud. If the times are now online into my account, why can’t I edit them. I’m looking forward to future improvements and refinements, but this is about the whole service. Let’s focus on the iPhone app now.

Syncopy for iPhone is slick and features a gorgeous User Interface. There are two main buttons: Paste to Server and Copy to Server. 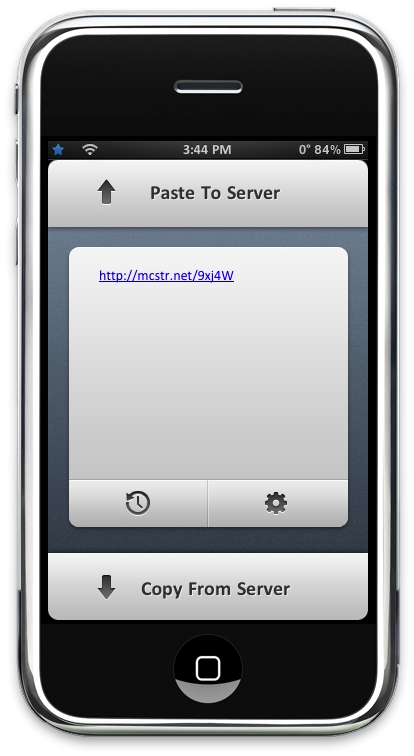 As you can guess, the developers couldn’t build a background-running app due to the SDK limitations, but I’m still wondering why they don’t go releasing specific Cydia tweaks for them. It should deserve an in-depth post, but - seriously - setting up a repo it’s free and doesn’t require that much of knowledge. Moreover, it could be the perfect way to make people buy the app from the App Store, if it can be extended with Cydia. Anyway, the application is very starightforward and once you tap copy from server it takes a second to sync the “clouded clipboard”.

The great thing about it is History:  you can retrieve every item you previously copied into the clipboard by just tapping the History button and “More”. You can view the date and time that text was copied, view and copy it again and delete it by swiping over it and hitting Delete. That’s it. 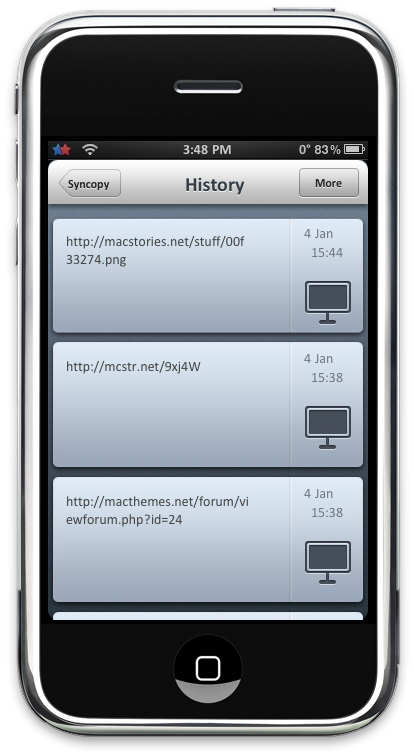 I started this review saying that sometimes it’s all about timing. Syncode saw the light a few days after King Pastebot III ascended the throne, and it wasn’t so great for marketing. I’d like to state anyway that Syncode is way different from Pastebot when it comes to clipboard sharing: while Pastebot requires both the devices (Mac and iPhone) to be on the same network using Bonjour technology, Syncode works using the cloud, so you just need to enter the same account ID. If you’re really serious about clipboard sharing and syncing Syncode is more reliable and useful than Pastebot, though you could argue about Pastebot’s having more features and an even sexier interface.

Truth is, Syncode isn’t a full featured clipboard manager, it’s a utility that syncs your desktop and mobile clipboard using the internet. And at $0.99, that’s enough for me.