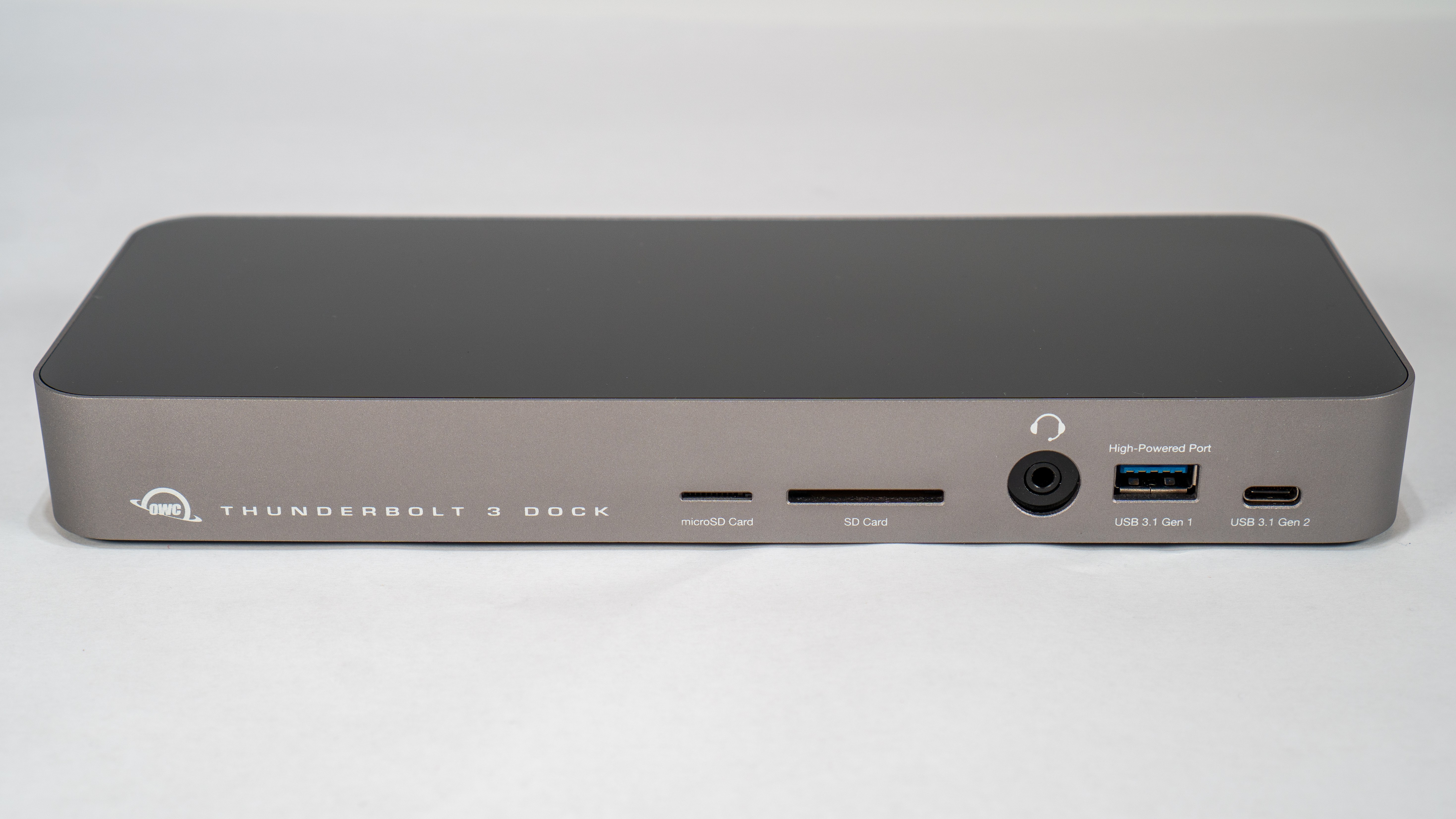 By limiting its laptops to Thunderbolt 3 and USB-C ports, Apple has been able to continue its relentless pursuit of thinness. That’s great when you’re on the go. However, if an Apple laptop is your primary computer, the number and lacking diversity of ports is problematic. When you’re back at home or work, connecting legacy USB-A devices, SD and microSD cards, and Ethernet and HDMI cables requires an array of often expensive dongles and cables that quickly fill up the available ports on your Mac.

When I commuted to downtown Chicago for work, I carried a 2016 MacBook Pro with me. At the end of the day when I returned home, I sat the laptop on my desk and plugged in a bunch of cables and dongles, which was a pain. Because I work from home now, I don’t use my MacBook Pro that way very often anymore, except in the summertime when that laptop becomes a testbed for the latest macOS beta. I’ve been trying to work on the macOS beta from a MacBook Pro as much as possible over the summer, and the experience has caused me to revisit the frustration of unplugging cables and dongles every time I want to leave my desk and work elsewhere.

I had been thinking about ways to improve my summertime beta setup when Other World Computing offered to send me its OWC Thunderbolt 3 Dock to test. I took them up on the offer, and having used it for a while now, I love the convenience of being able to connect everything to my MacBook Pro with a single Thunderbolt 3 cable. It’s not an inexpensive solution, but compared to the cost of purchasing multiple over-priced dongles, it’s not as extravagant as it might seem at first. 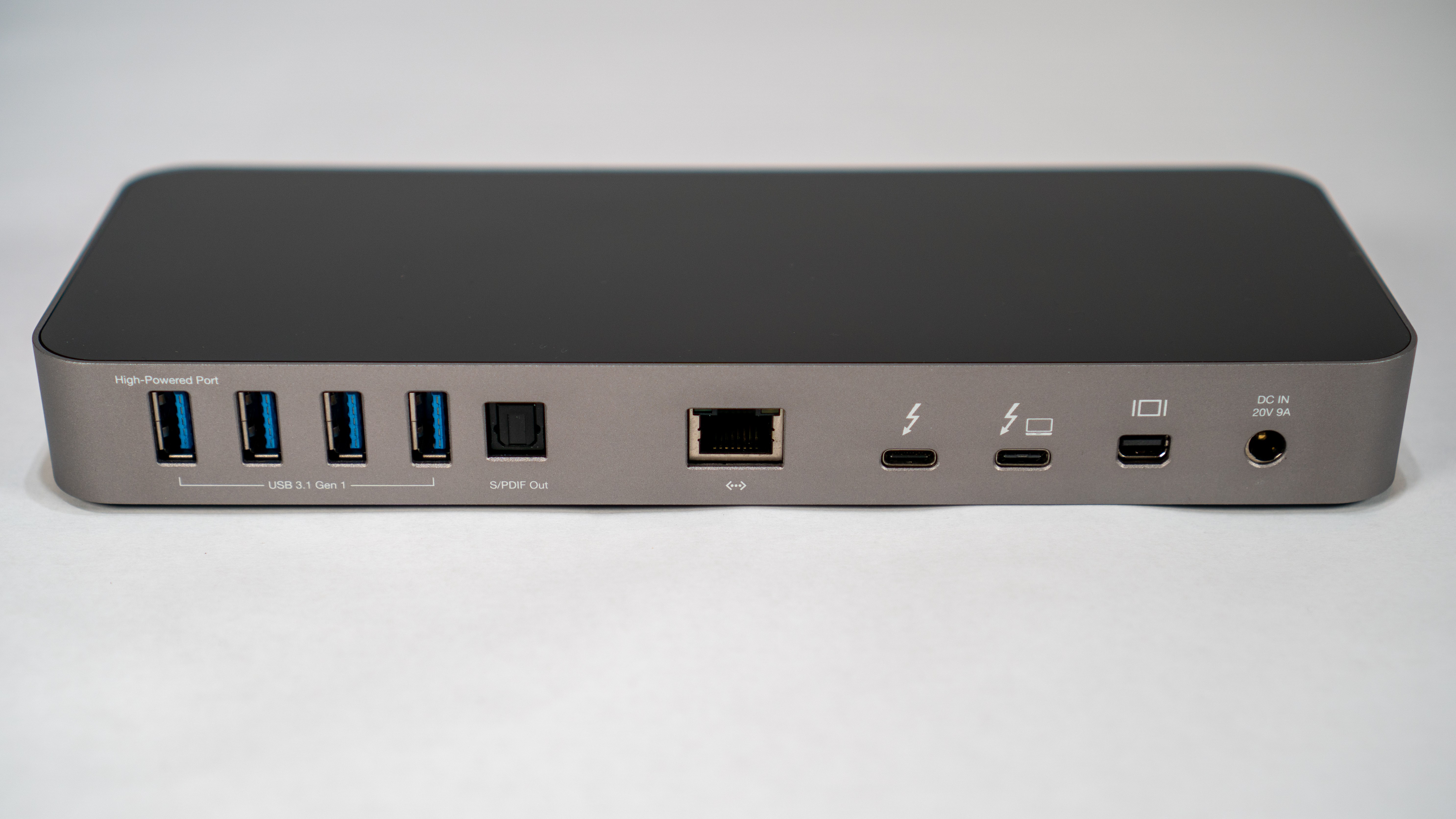 Nine of the OWC Thunderbolt 3 Dock’s ports are on the back.

The OWC Thunderbolt 3 Dock has 14 ports, which start with the Thunderbolt 3 port that connects the dock to your Mac using a cable that comes with the device. In addition to handling data transfer from the dock’s other ports to your Mac, that port delivers 85W of power, which has allowed me to ditch my ever-present Apple power cable.

It’s worth noting, however, that the power brick and cord combo that comes with the Thunderbolt 3 Dock is bulky and heavy, weighing more than the dock itself. That hasn’t been a dealbreaker for me because the dock has remained on my desk since I started testing it, but it’s worth keeping in mind if you’re looking for a dock to use when traveling. 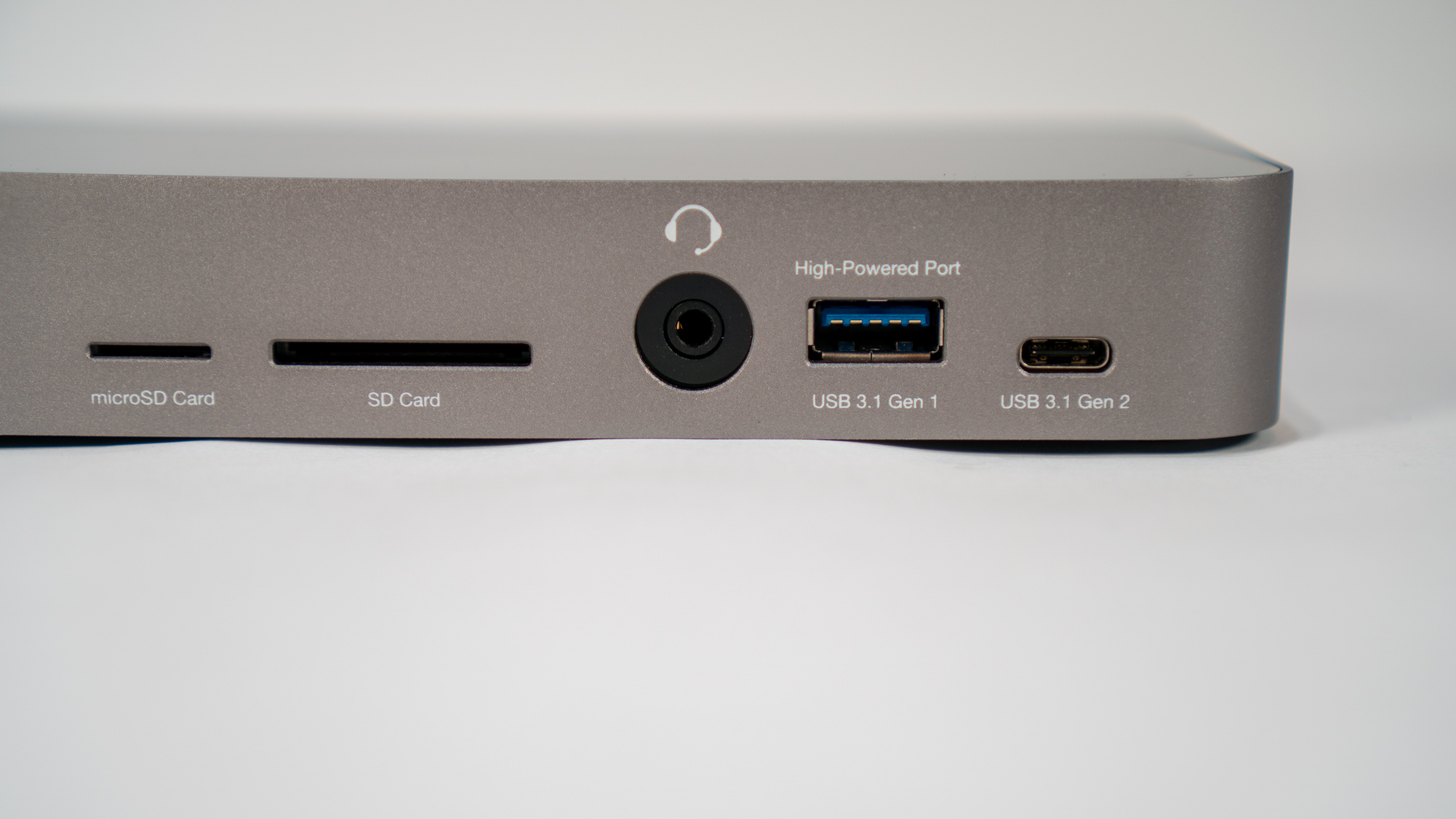 The front of the OWC Thunderbolt 3 Dock has SD and microSD card slots as well as powered USB-A and USBC ports.

Photographers will find the two front-facing SD card slots handy to have when returning from a photoshoot. The audio port handles audio input and output, so it can be used with speakers, headphone, and microphones. There’s also an optical S/PDIF audio input on the rear of the dock for handling additional audio devices. It’s useful to have two variants of USB ports on the front of the dock for charging devices, connecting USB thumb drives, and making other temporary connections too. 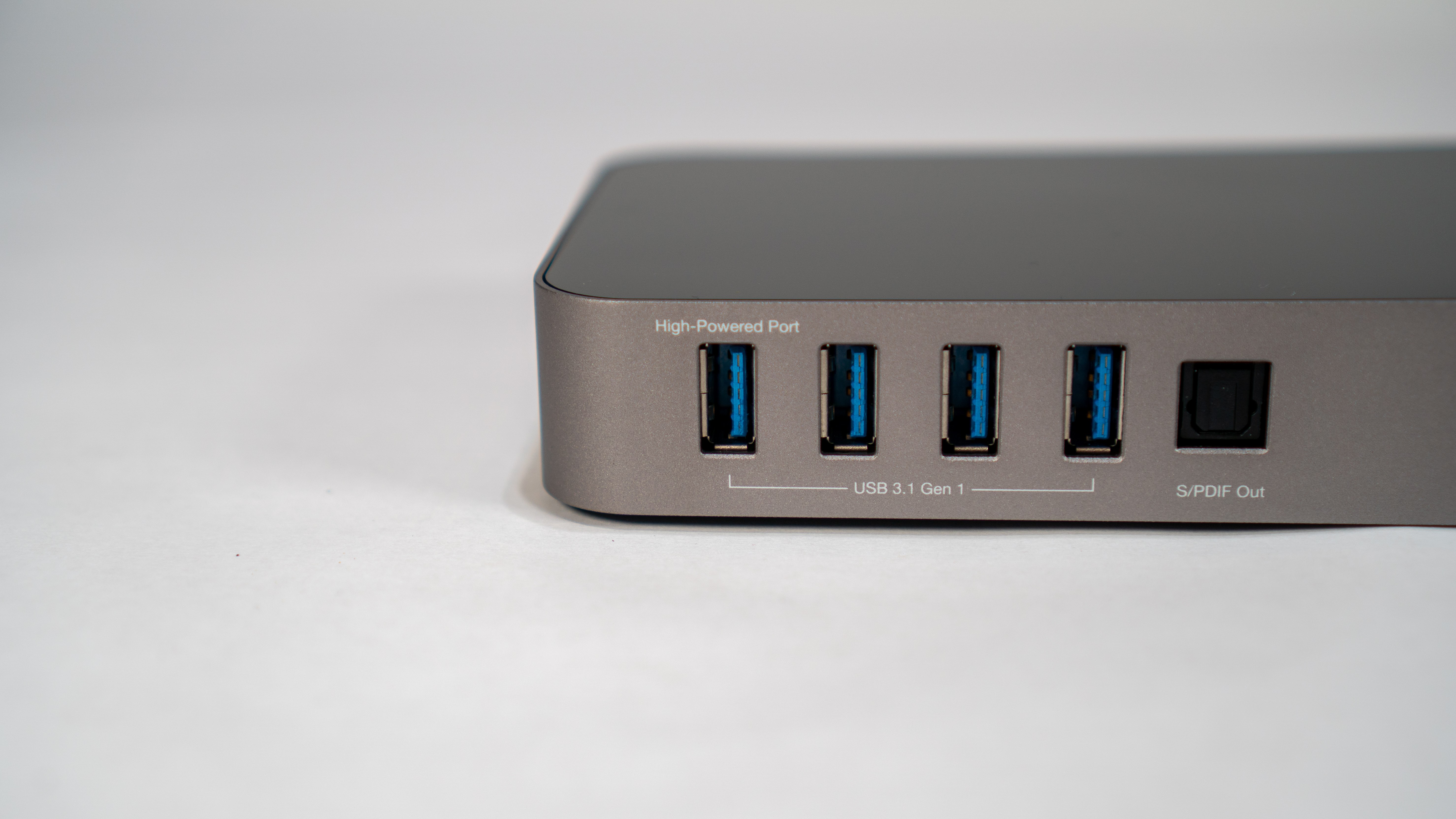 One side of the dock’s rear has 4 USB-A ports, one of which is powered, plus optical audio out.

The rear of the dock includes nine more inputs. There are four USB-A Gen 1 ports, one of which is powered, making it a good option for external powered SSD or HDDs that require power. The other three USB-A ports can be used with devices that don’t need power like mice, keyboards, and printers.

In the center of the dock’s rear is a Gigabit Ethernet jack and Thunderbolt 3 and Mini DisplayPort inputs. The Thunderbolt 3 port supports two 4K displays or one 5K display, Thunderbolt 3 device chaining, and USB-C Gen 2 devices, but does not support connecting an iPad to an external display. 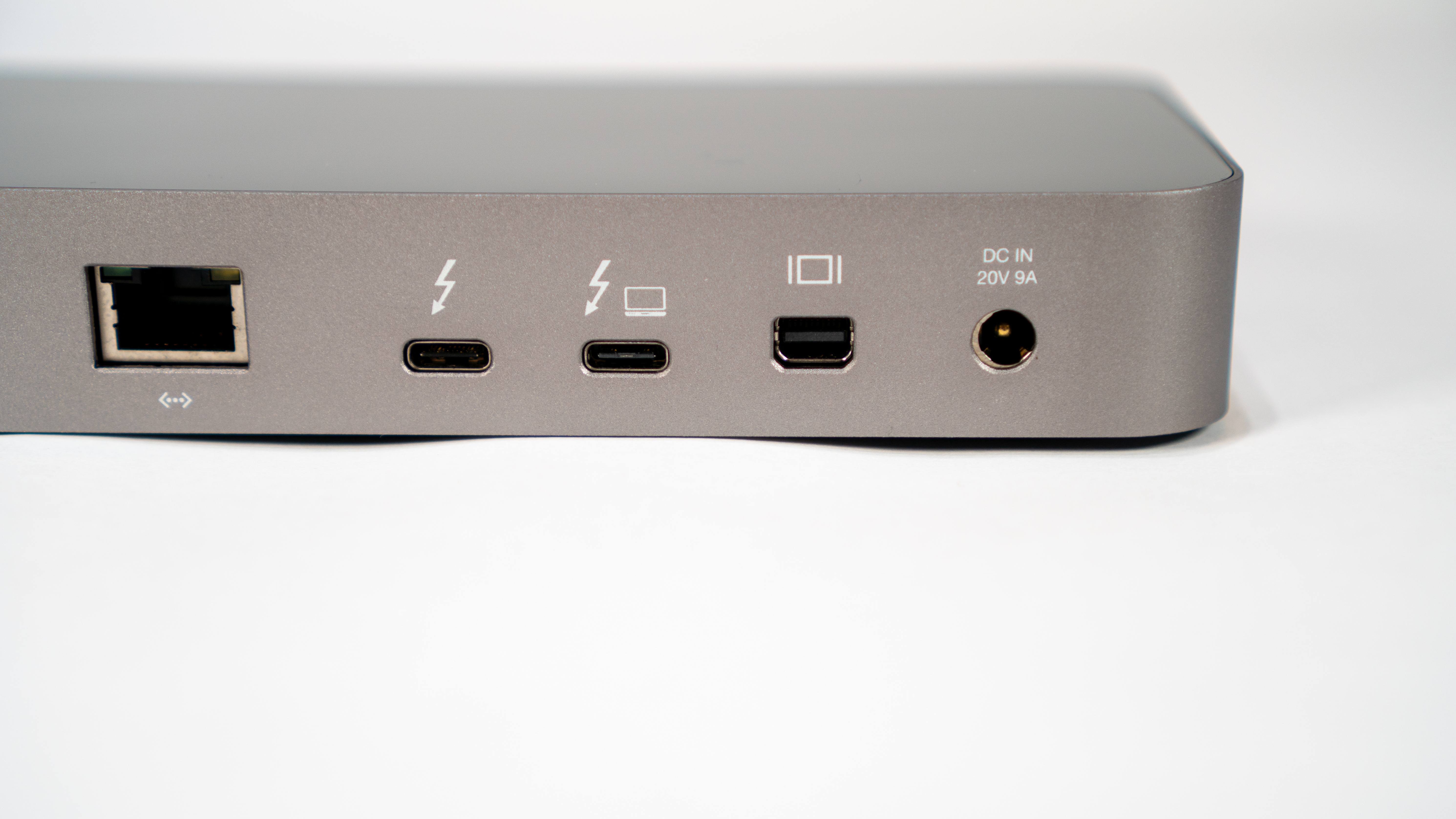 The other side of the dock features Ethernet, Thunderbolt 3 ports, Mini DisplayPort, and an input for the dock’s power adapter.

The Mini DisplayPort is probably the connection I’m least likely to use on the Thunderbolt 3 Dock. Because so many displays support HDMI, I would have preferred that type of connector to Mini DisplayPort.

One especially nice touch that I appreciate is a free menu bar utility OWC offers called OWC Dock Ejector. If you have multiple drives attached to a dock, the process of ejecting each one before disconnecting the dock defeats some of the convenience of having a single Thunderbolt cable connected to your Mac. With OWC Dock Ejector, a single click safely ejects every external drive attached to my dock, so I can yank out the Thunderbolt cable and be on my way. It’s a thoughtful software addition that makes the hardware better than it would be on its own.

The hallmark of a quality dock is that it just sits there handling inputs and outputs and powering your Mac without the need to fiddle with it. I can’t speak to the OWC Thunderbolt 3 Dock’s longevity given the short time I’ve used it, but setting it up was simple, and it’s been entirely trouble-free the whole time I’ve used it.

Last year, I found myself sitting at my desk testing Mojave more than I would have liked, in part because of the friction of disconnecting my MacBook Pro from Ethernet, external drives, an external display, audio gear, and power and then reconnecting everything again later. By reducing that process to a single connection point, the OWC Thunderbolt 3 Dock has made it easier to get away from my desk, which has made testing macOS a better experience this summer. Disconnecting a fistful of cables and dongles isn’t a terrible hardship, but being able to grab your laptop and go, then quickly reconnect when you return, is certainly better. This level of convenience makes the OWC Thunderbolt 3 Dock worth a look, especially if a Mac laptop is your primary computer.

The OWC Thunderbolt 3 Dock is available in Silver and Space Gray directly from OWC for $299.