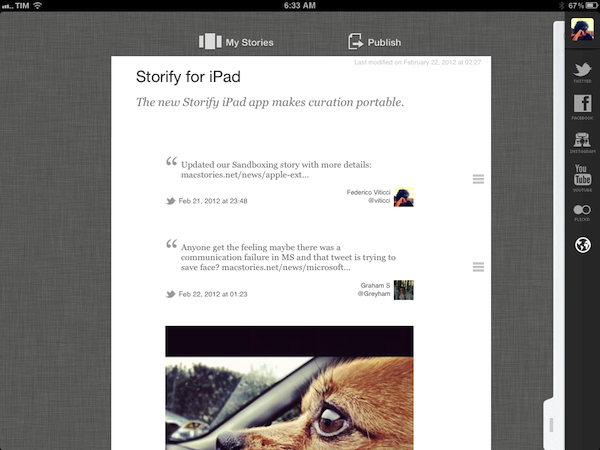 Since its release in April 2010, the iPad has been widely regarded as a “consumption device” not really suited for “content creation”. Whilst we have already examined the issue with dismissing the iPad as a device that’s not capable of doing the same things a computer can – and my friend Shawn has a good take on why “content” generally is an awful marketing umbrella – the Storify iPad app, coming today for free on the App Store, is yet another example of how the iPad is changing the way we create through unique interfaces built around touch and the strengths of iOS.

Storify is an interesting service. Per se, Storify isn’t strictly focused on allowing you to create original content (images, text, or a combination of both) that you can share with your friends; rather, Storify is a curation tool that, among other services, leverages Twitter and the openness of the web to let you create “social stories” based off elements shared by people you follow, or just about anyone else on the Internet. Storify wants to tell stories by “curating social media”. I have covered the topic of curation – especially Twitter curation – several times on MacStories, and I recently mentioned Storify in my review of Tweet Library, an iOS app by Manton Reece that enables you to create collections of tweets for future reference. As I detailed in the article, Storify integration in Tweet Library means you can easily collect tweets from a variety of sources (people you follow, Twitter lists, favorite tweets – Tweet Library does a great job at breaking up Twitter sections in neatly organized “sources” panels) and publish them online as a bundle on Storify. The first official Storify iPad app, however, brings the full feature set of Storify (or at least the majority of its online functionalities) to the tablet, mirroring the web counterpart available at storify.com to allow you to create visually rich social stories that go beyond collecting data from Twitter.

I have been able to test Storify for iPad in the past weeks, using it to create and edit stories that I’ve embedded on MacStories such as this one, or this one. When I first talked to Storify CEO Xavier Damman about their upcoming iPad client, I wondered how well the team had managed to port the desktop user interface and experience of Storify, which is largely based on drag & drop, to the iPad. Furthermore, the Storify web app benefits from the desktop nature of the web browser, which makes it easy to switch between dozens of tabs, collect links, snippets of text, and images, or simply open links from other applications without having to worry about “switching back” using a multitasking tray, such as the one we have on iOS. These are all problems a native iPad app should somehow address, I thought, as it’s not just as easy and quick to switch between the browser and multiple sources on an iPad, and I wouldn’t want the Storify creation process to become slow or, worse, cumbersome. It turns out, the Storify team solved the problem with converting mouse interaction to multitouch, and quite beautifully.

Storify for iPad is a clever mix of drag & drop, touch selections, panels, and a sidebar listing all your available sources and sections. Think of it as a Sparrow-like sidebar, only on the right side of the screen, with panels reminiscent of Twitter for iPad’s ingenious navigation. The combination of icons in the sidebar, panels, and drag & drop support makes for a pleasant experience that should enable interesting curation workflows on the iPad.

The app’s main screen presents a horizontal list of your available stories, both published and drafts, with previews for the latest edits you’ve made. You can scroll through these stories, create new ones, edit an existing one, or delete it. Double-tapping a story will bring it in the foreground, opening the editing interface built exclusively for the iPad client, albeit inspired by Storify’s core concepts (and features) on the web. 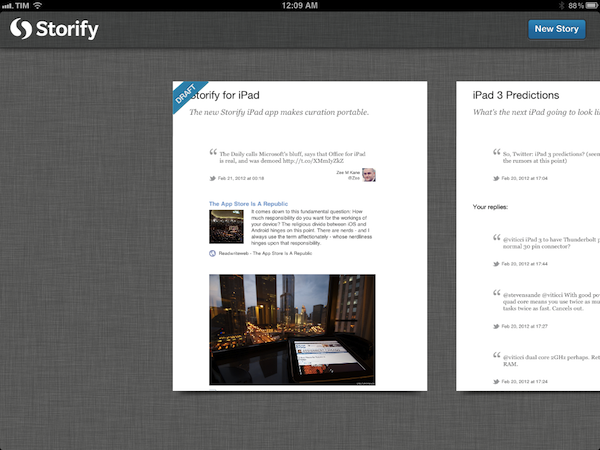 Storify works only in landscape mode, which is probably a good choice considering you’ll have to keep your eyes on lots of content that will fill a large portion of the screen. On the right, a sidebar collects your available options for curation: Twitter, Facebook, Instagram, YouTube, Flickr, and Browser. Now, the web app at Storify.com supports more input sources (such as RSS and Disqus) that I wasn’t able to find in the iPad version, and there doesn’t seem to be access to Storify’s own StoryPad functionality (a virtual scratchpad for content saved from the web with the service’s bookmarklet or Chrome extension) in this first release. It would be great to see Storify bringing the iPad app up to speed with the web’s offerings for a next update, but StoryPad and RSS aren’t features I use much on storify.com, so I didn’t really miss them. Because of its iOS nature, however, the iPad app does have some exclusive perks over its web brethren: for instance, iOS 5 Twitter integration allows Storif to compose tweets directly, send them off to Twitter, and fetch them using the app’s built-in timeline support. Twitter plays indeed a big role in Storify: it likely is the service you’ll use more to “curate social media”, and it’s the first tab you can check out at the top of the sidebar.

Tapping on the Twitter icon reveals more options: you can display your own tweets, load your favorites, open your Twitter timeline (people you follow), and search. Search allows you to look for all tweets, just images, or nearby tweets. Storify for iPad’s fundamental UI approach is all laid out in the Twitter implementation: as you tap on a source, a panel will slide out from the right side, with the main content area on the left shrinking to just a vertical list of the media you are embedding in your story. Say you want to drag a tweet onto your story – you can just tap on it, and drag it to the left. As you drag an item over to the story, the app will display a separator to indicate where it’s possible to drop it – this is fairly similar to how storify.com handles drag & drop. Once dropped, the tweet will be reformatted using Storify’s clean embedded view that shows the original text, source, date, and author. This is consistent across all the services supported by Storify, so no matter if you’re embedding an Instagram image or a tweet, you’ll always get proper attribution and profile pictures whenever possible.

Back to tweets: I don’t like how the panel doesn’t display a scrollbar to tell you just how much you have left to scroll, but at least the app seems to handle the “load more tweets” action better than many dedicated iPad Twitter clients. In the Twitter tab, you can get regular tweets as well as photo uploads, and “curate them” into a collection; you can also follow an http:// link and go directly to the source of an article. To do this, the app will open an additional layer on top of the panel, which behaves exactly like the Browser icon at the end of the sidebar. That is, the browser view is a layer above the main panel, and swiping it away or tapping the controller handle at the bottom will simply dismiss the web view, not the panel itself. This may be a little counterintuitive at first as you’re getting used to the whole metaphor or “swiping the panel away”, but it makes sense if you think of the Browser UI as an extra layer atop of Storify’s main sources. I like how the Browser has a handy “Add to story” shortcut that takes care of embedding a link (with a rich preview) in the story for you. I also like how you can load any user’s Twitter content simply by searching for its username.

Once you get accustomed to interacting with the right panel, using Storify for iPad is relatively simple, and even easier than the desktop web app. You can login with Facebook (using single sign-on with the Facebook app) and load your photos; you can login with Instagram and see all your pictures, feed, or search for someone specific; you can check on your YouTube account, Flickr, or manually enter a URL in the browser and forward webpages straight to your social story. 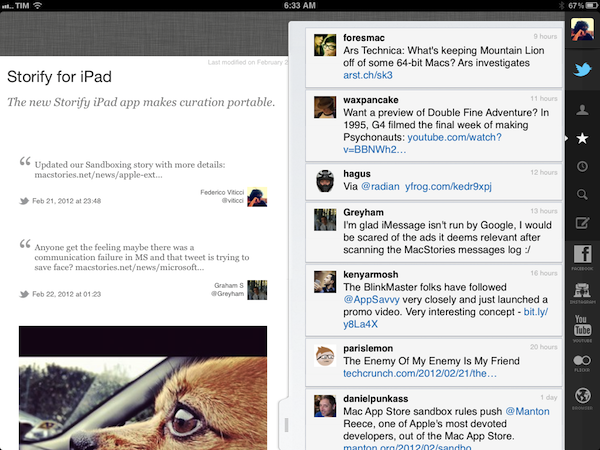 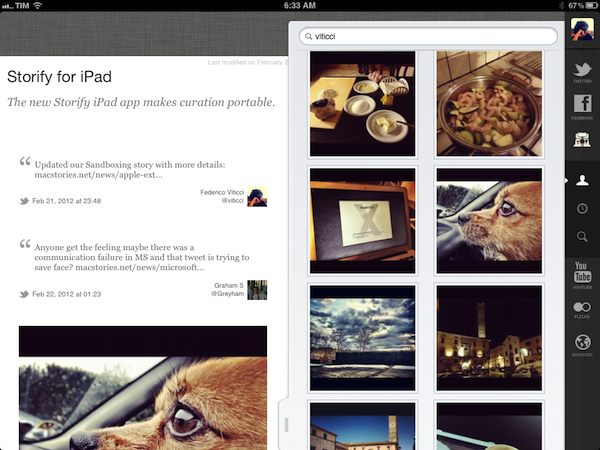 Unlike the panel, the content area of Storify (where you’ll be assembling your social stories) is fairly average stuff for experienced iOS users. At the top, you’ll be able to enter a title or subtitle for your story; items curated from the web and inserted below can be reordered using iOS’ standard controller to move an item up or down in a list. You can tap & hold items to delete them, and tap anywhere to add some text. And here’s my biggest gripe with Storify for iPad (and one that’s only partially imputable to the developers): because iOS has no standard rich text API, you won’t be able to format your text as you would do on storify.com – with a standard WYSIWYG editor – and the Storify team decided not to include its own rich text editing interface like, say, Evernote did. This means you’ll always end up with non-formatted text when curating from the iPad – here’s to hoping both Storify and Apple are already working on this. iOS needs rich text available to developers.

Upon completing a story, Storify allows you to publish it online (otherwise it’ll just be saved in the Drafts, which are backed up online as well) and tweet out the results of your curation efforts. I never notify the Twitter users that end up in a collection of mine using Storify’s sharing menu, but I do like how the developers put a shortcut to copy a collection’s URL in there.

I have never agreed with the assumption that the iPad is only good as a consumption device that you can’t use to get any “real” work done. As the past two years have showed, the great selection of third-party apps available for the device has allowed many different people to start thinking of the iPad as a primary device, a computer replacement that’s both good at letting you read, watch, and listen, as well as write, sketch, and take notes. Starting today, with Storify for iPad you can curate and create social stories.

As I said above, Storify for iPad is another fantastic example of how the iPad can change existing applications for the better thanks to new intuitive interaction methods and delightful interfaces that are ultimately fun to use. Storify for iPad isn’t perfect and lacks some of the features available on storify.com, but it’s a great first release that shows a promising future for portable curation of social media and the web.

If you’re a Storify user, the iPad app is a must-have, and it’s free on the App Store.