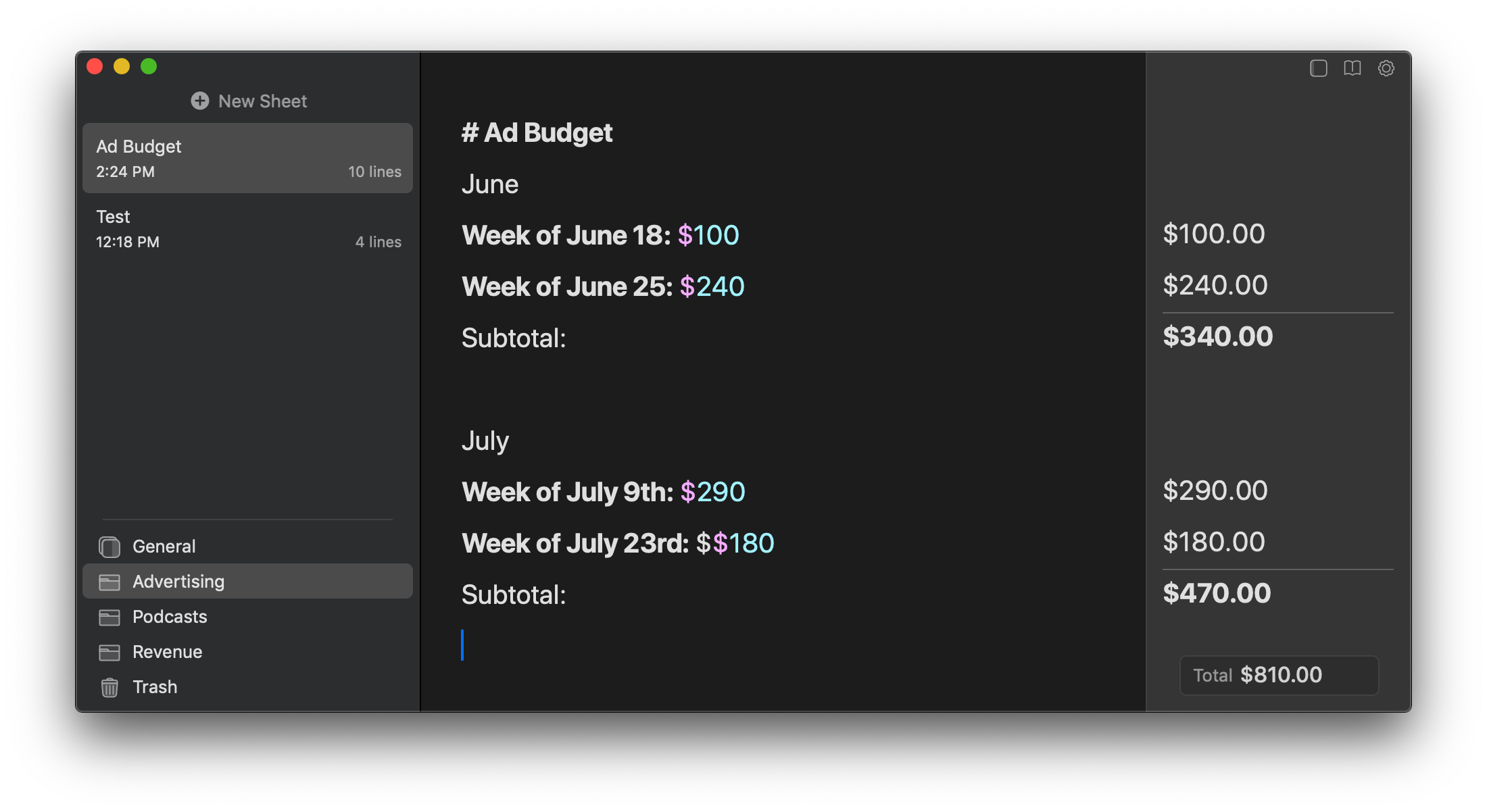 The strength of Soulver lies in its flexibility. Full-fledged spreadsheet apps like Numbers and Excel have their place. However, day-to-day life requires calculations that don’t demand that level of horsepower and benefit from contextualizing numbers with text. It’s the kind of math that happens in notebooks and on the back of envelopes. By combining elements of a text editor, spreadsheet, and plain English syntax, Soulver commits those easily-lost notebook scribblings to a format that allows for greater experimentation and easier sharing.

During WWDC last week, Acqualia Software released a major update to the app. Soulver 3 for Mac features an updated design and substantial new functionality that I love. The app has never been easier to use, and its implementation of a sidebar to corral sheets is fantastic.

However, unlike its predecessor, version 3‘s file format is incompatible with the iOS version of the app and earlier Mac versions. Soulver also saves its data as a single ‘sheetbook’ file now, which means it can no longer save or manage sheets as individual files saved to arbitrary locations on your Mac. Both changes will be problematic for some users who may want to wait for future updates that the app’s developer has said are in the works.

At its core, Soulver lets you create calculations surrounded with explanatory text, which adds context to the numbers. The app is smart enough to understand phrases like ‘20% off of 100’ or ‘convert $500 to euros,’ placing the result in the answer column on the right side of the window. In the bottom right-hand corner is the total of all of your calculations.

The app allows you to do things like make a list of monthly expenses to work out a simple budget for yourself or a list of products, to which you apply discounts with totaled results. Soulver can do more complex calculations too, but in my experience, it’s in spinning simple ‘what if’ scenarios and iterating on them where the app shines the brightest. Questions like, ‘what would the impact be of increasing the price of the widget we sell by 5% if we also discount 15% of all sales by 10% for the next year?’ From that starting point, you can test the outcome of different price changes, discounts, and sales volumes quickly. 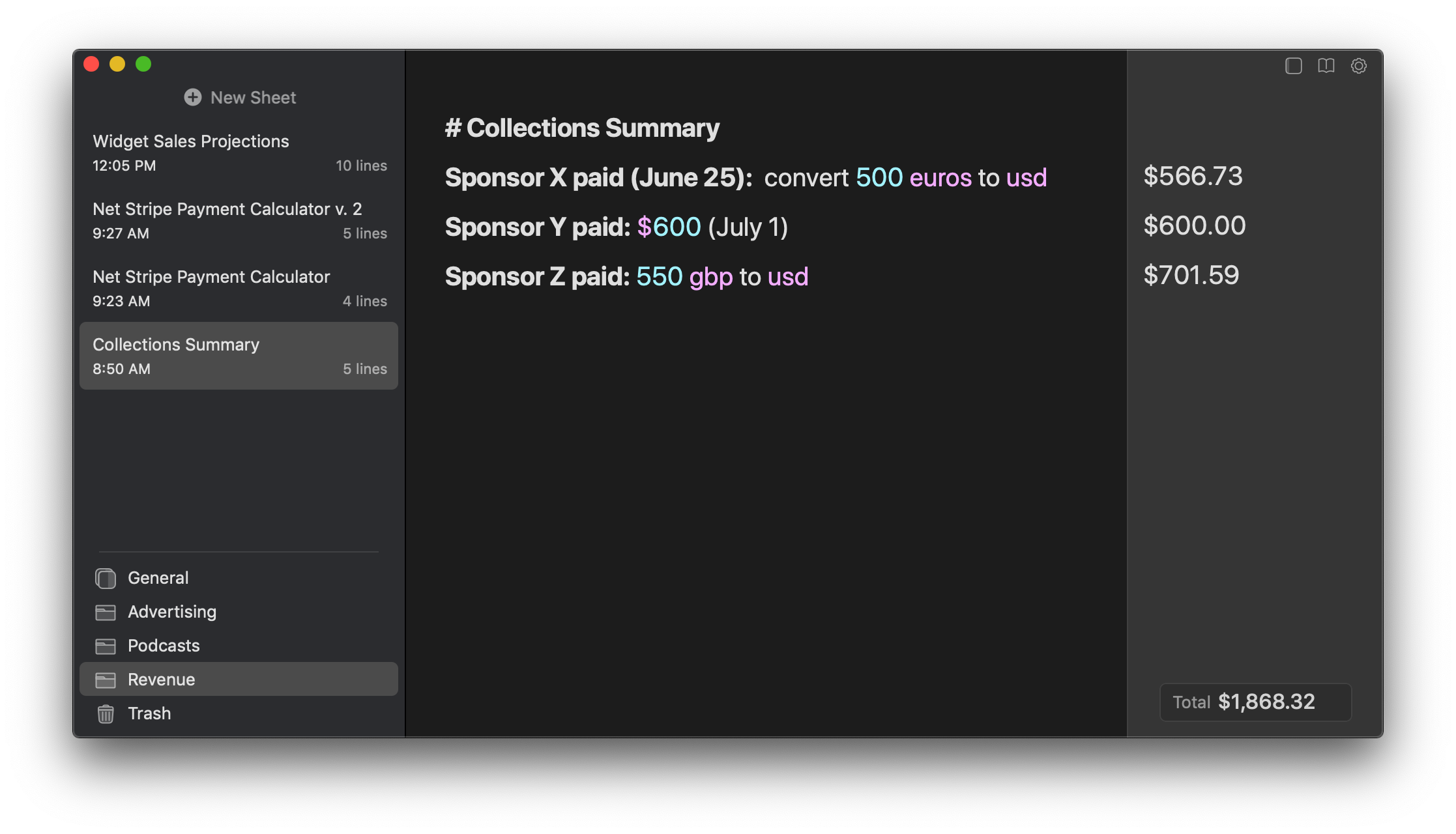 Soulver 3 embraces this text-infused approach to calculations more than ever before with a new sidebar reminiscent of note-taking apps. It’s a change to the Mac app that will be familiar to Soulver’s iOS users. The sidebar, which can be hidden when not in use, lists sheets with their name, along with either the creation date or modification date depending on your sorting preferences, and the number of lines in the sheet. The sheets are named based on the first line of the sheet and can be sorted based on Date Edited, Date Created, and alphabetically by Title. Folders are listed alphabetically only.

The sheet sorting features are an excellent addition to Soulver 3. In most instances, I’ll keep my sheets sorted by Date Edited, which tends to keep my most frequently used sheets near the top, but I’d like to see the app add sheet pinning and manual ordering for sheets and folders too. That way, sheets I frequently use for reference that don’t change often can still sit near the top of the sidebar for easy access.

I’d also like to see the ability to change the way sheets are sorted included in the sidebar. Currently, sorting options are only accessible from Soulver’s Preference pane, which is a little more cumbersome than I’d prefer.

It’s worth noting that sheets, folders, and other data are now stored together in a ‘sheetbook’ file in Soulver’s application support folder. The location of the sheetbook file can be changed in Preferences to Dropbox, iCloud Drive, or another cloud service, so your sheet library is available across multiple Macs. However, if you’re someone who preferred to keep your Soulver documents in an arbitrary folder with other project files, your workflow will have to change in Soulver 3.

You can still export sheets to a different location such as a project folder, but the next time you want to edit it, you’ll have to edit the version in Soulver and then re-export the sheet to your project folder or import the version from your project folder, edit it, and export the modified version. I prefer to keep my sheets together in Soulver, so the change doesn’t bother me, and I’ve been told a better solution for this scenario is in the works. However, if you store sheets in multiple locations and don’t want to do the import/export dance, you may want to stick with version 2 of Soulver, which is still available in the Mac App Store.

In addition to self-created folders, Soulver includes a few special folders. The first time you open a Soulver 2 sheet or import a Soulver 3 sheet from another location, an ‘Imported’ folder appears. Similarly, a ‘Trash’ folder appears anytime you delete a sheet. Finally, there’s a default ‘General’ folder where new sheets are stored until you file them elsewhere.

The other significant design changes to Soulver are support for Mojave’s dark mode and a new icon designed by Marc Edwards of Bjango. The design refresh, along with the new sidebar, give Soulver a modern feel that fits well with other modern Mac apps.

Soulver has also updated the kinds of calculations it supports as well as the ways users implement them. Chief among the changes is support for date and time calculations. For example, you can ask Soulver to calculate the number of days between today and next Saturday or the weeks until January 1st. For developers, you can also create a Unix timestamp or convert a timestamp to a human-readable date. 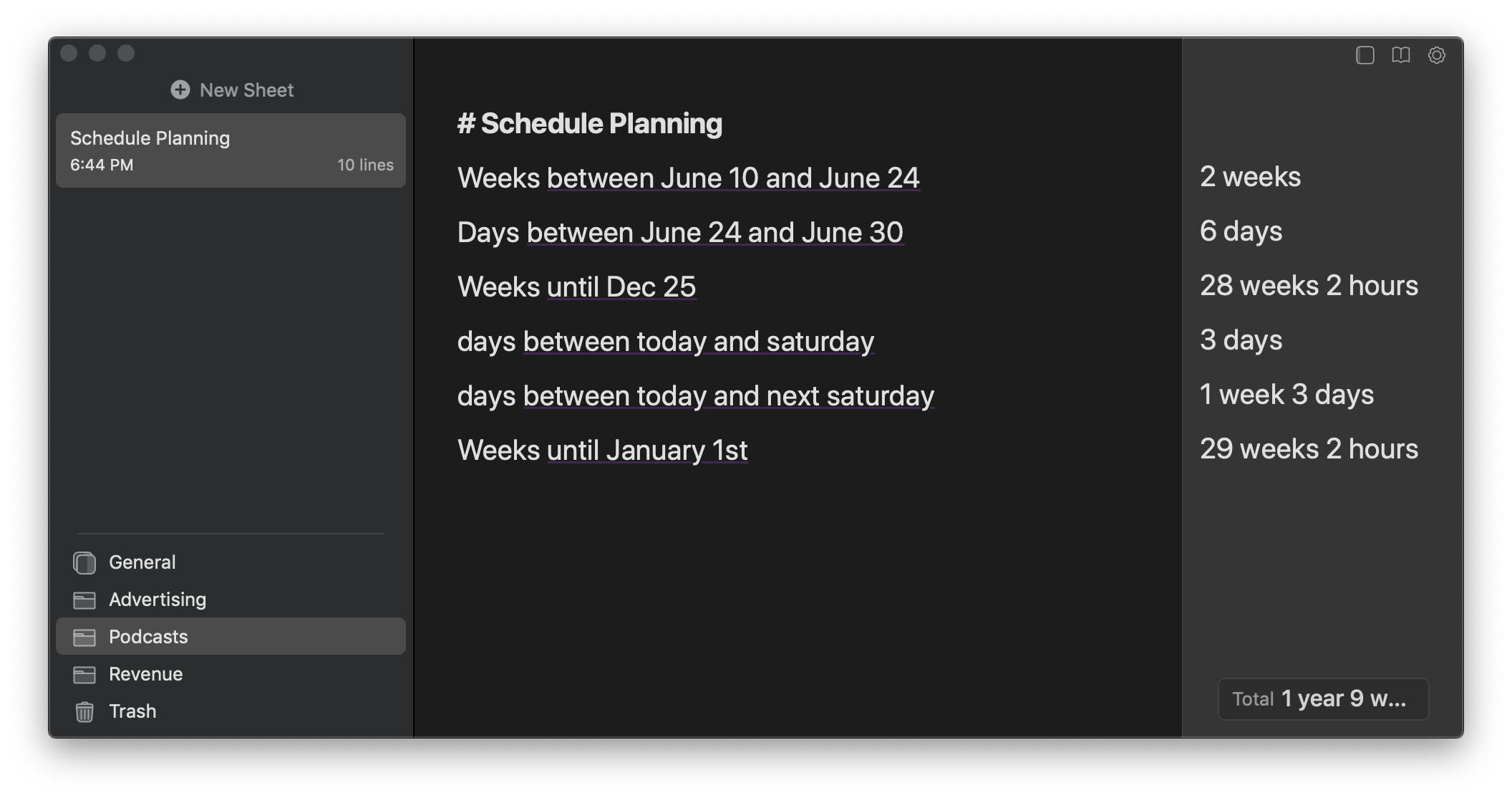 Other new calculations include proportional math like ‘3 is to 6 as 5 is to what,’ a ‘half of’ function, and better percentage syntax for answering questions like ‘25 is 80% of what?’ New units for conversion calculations have been added to the app too, including more scientific units and many cryptocurrencies.

Sheet creation has been enhanced too. My favorite new feature is subtotals, which allows you to create interim totals in a longer calculation. At the end of a list of values, type a new Subtotal line, hover over the answer column, and click ‘Make Subtotal.’ Soulver will insert a line, calculate the subtotal of the items above, and display the result in bold. A sheet can also have multiple subtotals, each of which is calculated using the figures listed since the last subtotal. 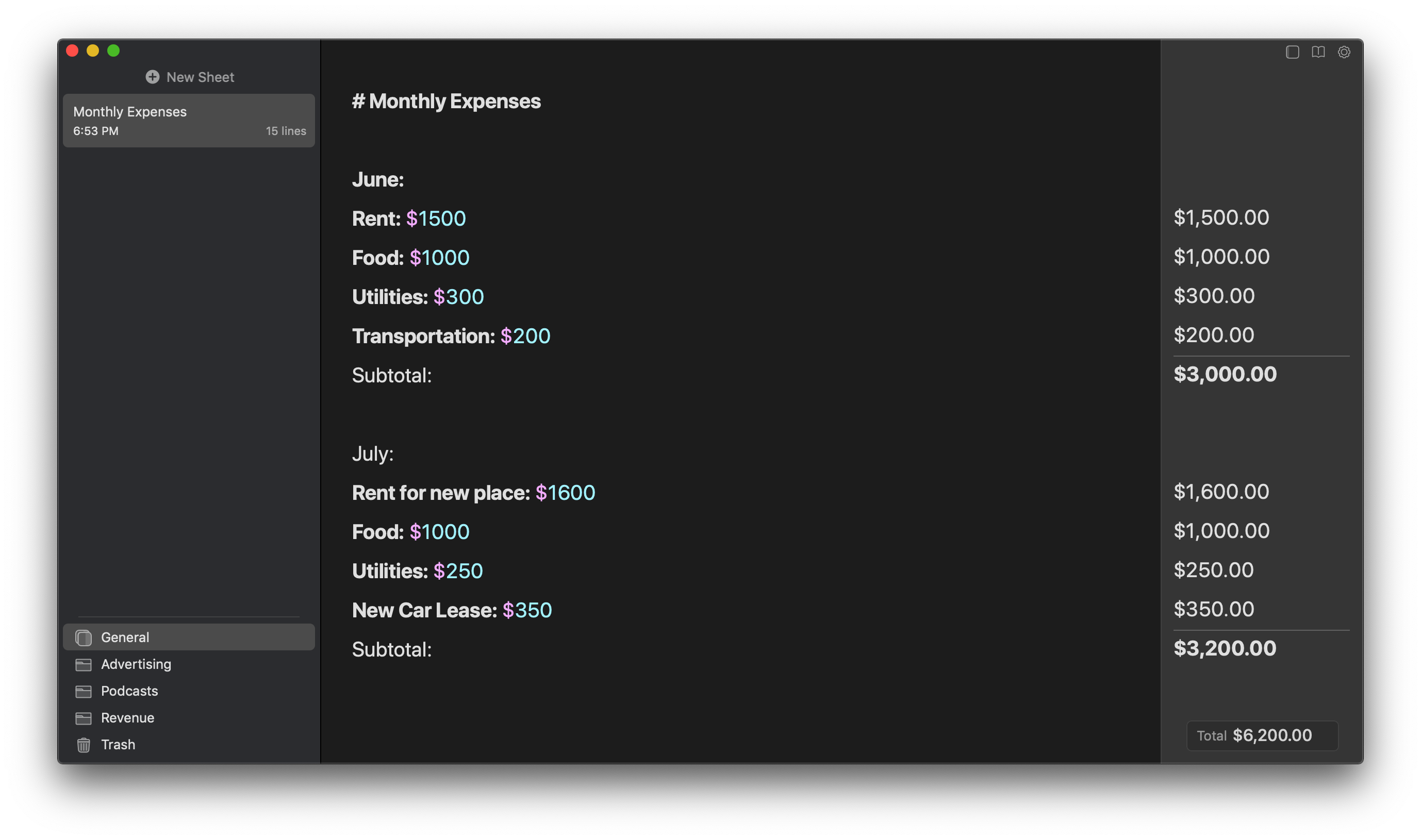 Another advantage Soulver has over pen and paper is its use of variables and line references. Variables are words that can be assigned a value or calculation like ‘Monthly Rent = $1500.’ For the first time with version 3 of Soulver, variables can be defined as multiple words with spaces between them, which increases their readability. Also, hovering over a variable name will reveal its value.

Variables can now be redefined in the same sheet, allowing you to create multiple scenarios using the same variable name but with different values. For example, you may want to create two different budget scenarios, one with ‘Monthly Rent = $1500’ and another where ‘Monthly Rent = $2000.’ With its latest update, both versions can coexist in the same sheet. Soulver also supports global variables that work across sheets if you have a value or calculation that you find yourself using in multiple sheets.

Setting up and using a global variable in Soulver. 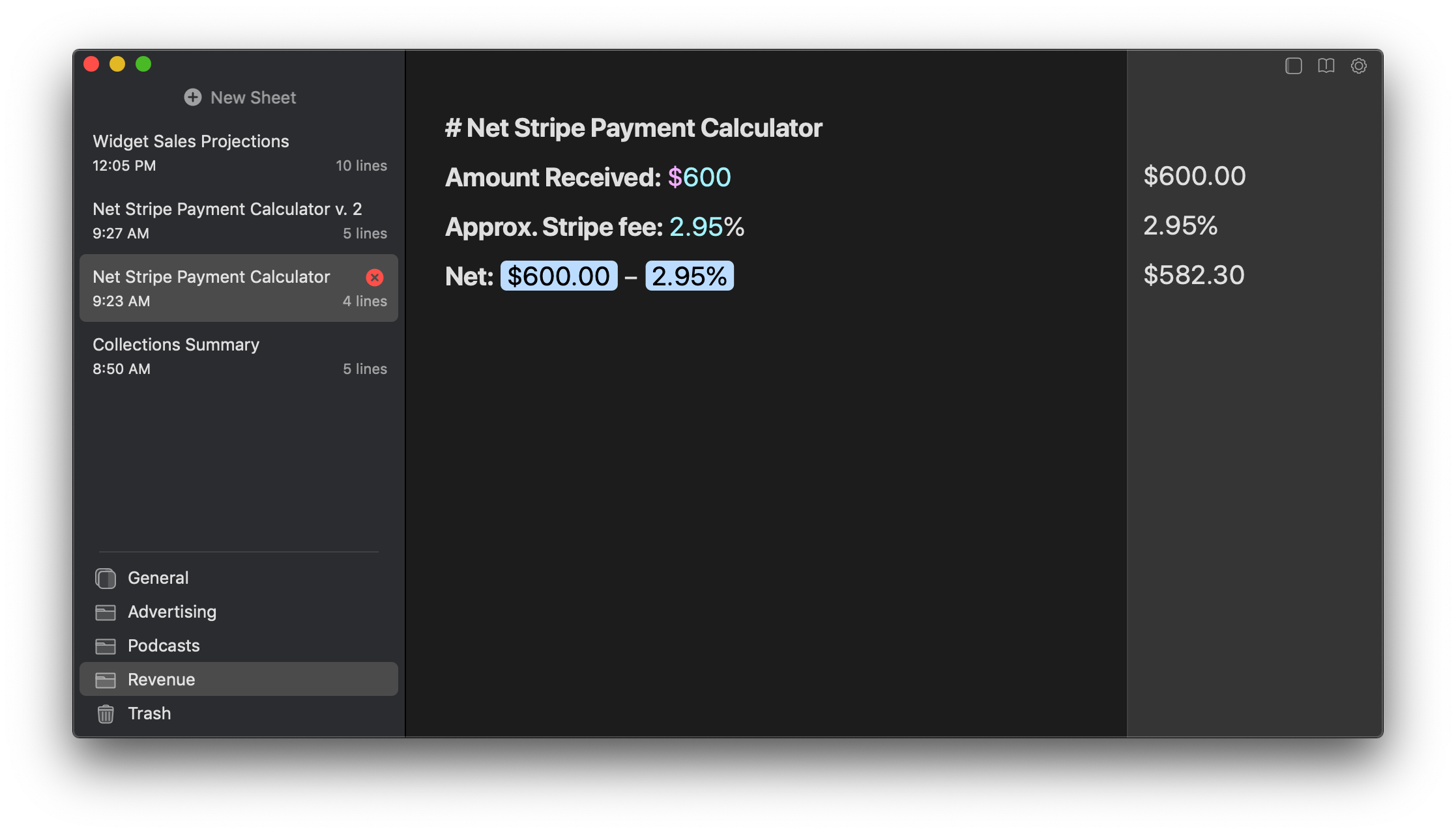 Using line references to do the final calculation.

With the update to Soulver, line references have a keyboard shortcut too. ⌘L displays numbers next to each line of a sheet that has a result in the answer column. Type the number corresponding to the line you want and Soulver will drop a reference to it at the cursor. 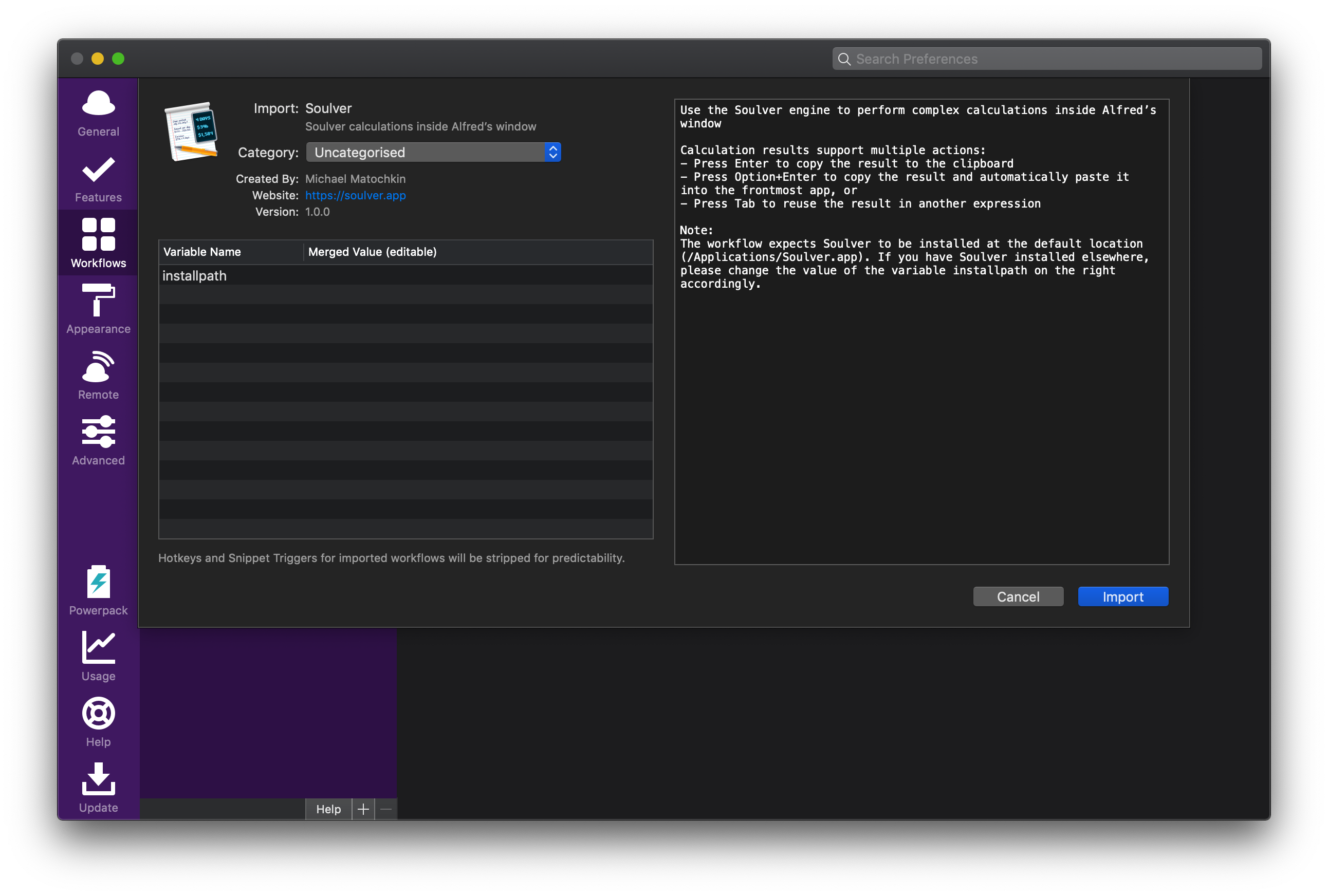 As an Alfred user, I’m particularly pleased that there’s also an Alfred workflow available from the ‘Install Extras’ option in the ‘Soulver 3’ menu. Assign a trigger to the workflow, and you can use Alfred to get the result for any calculation that would work in Soulver. Just type the calculation and then Return to copy the result, ⌥⏎ to paste it at your cursor, or tab to paste the result into Alfred’s text field to use it for another calculation.

One feature I’d like to see added to Soulver is share extension integration. I like that I can export to Soulver’s native format, plain text, or CSV. However, the ability to drop the text of a sheet into another app using Mojave’s share functionality would be easier than exporting a sheet and pasting the results into another app. Especially now that Soulver is more app-centric than file-centric, an extension for moving sheet data to other apps would be a nice addition to a future release.

I’m impressed with Soulver 3. The app was already a model of simplicity, but with the update, it’s even easier to use and embraces its text-based roots with a sidebar in a way that I think will resonate with a lot of users. If like me, you find a spreadsheet app to be overkill for many day-to-day calculations and you appreciate the ability to interweave explanatory text with your calculations, Soulver may be the perfect fit for your needs.

An iOS version of the app is in development, and I hope it is released soon because the loss of the ability to access sheets from any device when using version 3 for the Mac is a significant disadvantage. Although I can export some sheets as plain text and paste them into the iOS version of the app to use them there, that will inevitably lead to multiple versions of the same sheet and won’t work with sheets that use Soulver’s new features. If an iOS counterpart is critical to your work, you may want to wait for its release before updating to Soulver 3 on the Mac.

Still, in the brief time I’ve been using Soulver 3, I like what I’ve seen, and because I’ve always used the app primarily on my Mac, the lack of an iOS update hasn’t been a significant constraint on how I work. I’ve used the app side-by-side with complex spreadsheets as a sort of scratchpad to check calculations and test alternate scenarios. I’ve also used the app to quickly add anticipated expenses for an upcoming trip and share the results with family members. Ultimately though, what makes Soulver an app that has stuck with me across multiple Macs over the years is its flexibility and the fact that it allows me to avoid using a spreadsheet app when doing so would be overkill.

Soulver 3 for the Mac is available directly from its developer Acqualia Software for $19.95 for a limited time. Beginning in July, the price will increase to $29.95.