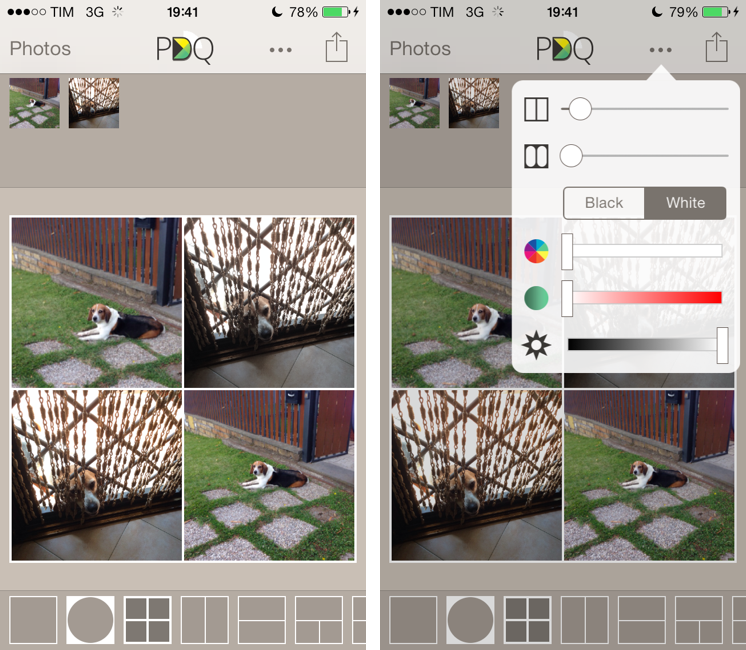 I’ve never been into the idea of sharing my photos as “collages”, especially because all the iPhone and iPad apps that promised to make it easy to assemble collages looked overly social, filter-oriented, or just badly designed. However, I recently wanted to send a photo collage of my dog to my parents, and I conveniently came across Diptic PDQ on the App Store thanks to Apple’s feature for iOS 7-ready apps. Apparently, PDQ (a Universal app) is the “lighter” version of Peak Systems’ more advanced Diptic app, which comes with all sorts of settings, textures, and In-App Purchases. I just needed to create simple collages with thin borders, so I bought PDQ and have been using it for the past week with nice results.

Diptic PDQ lets you create collages based on 35 built-in layouts that go from simple two-column and four-square frames to more complex grids that can accommodate up to five photos. I’ve never created collages with more than 3 photos, but I think that the layout choices are useful and well assorted. The app starts from a Camera Roll view that lets you pick photos from your device’s library; in this screen, you can take a new photo, or tap the album name’s at the bottom to switch from the Camera Roll to any other album, including shared Photo Streams you’re subscribed to. To pick photos, you tap on them, then hit Done.

In the editing view, you can see collage layouts at the bottom and a live preview of the final collage in the middle of the screen. The title bar nicely integrates with the system status bar and has buttons to re-open the photo picker, save and share a collage, or tweak borders. 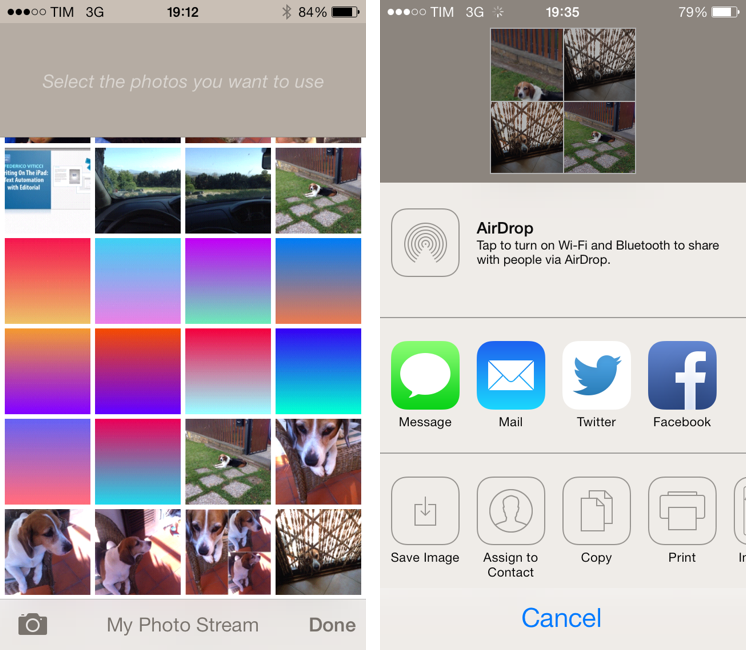 What I like about PDQ is that it values straightforwardness and easy sharing. You can drag & drop photos from the top shelf onto different sections of a collage, and, when the app notices that you’re trying to swap the position of two photos, it’ll suggest you that you can tap two photos at the same time to save time. You can pinch photos to zoom them, tap layouts to instantly change the preview, or tap a single photo to open a popover that has buttons to rotate a photo or flip it vertically/horizontally, as well as sliders for brightness, contrast, and saturation. Just like filters (which are brought up right before sharing, and can be ignored) I don’t care about the photo sliders because I like to leave my photos untouched.

The essence of the app, borders, is equally simple. From a popover, you can tweak border thickness and color, create round inner borders, and tweak the final look of borders with sliders. When you’re done and you’re happy with your frames and borders, you can save the image, and PDQ will display the native iOS 7 share sheet that, besides built-in actions, also contains shortcuts to send the image to Instagram and save it to the Camera Roll. Alas, there is no “Open In” support, so you won’t be able to send a newly created image from PDQ to other installed apps.

PDQ may not have rich sets of textures and custom border packs, but I think that’s the point. PDQ is an app made for people like me who just want to easily create photo collages with basic frame and border settings, and, at $0.99, I highly recommend it.