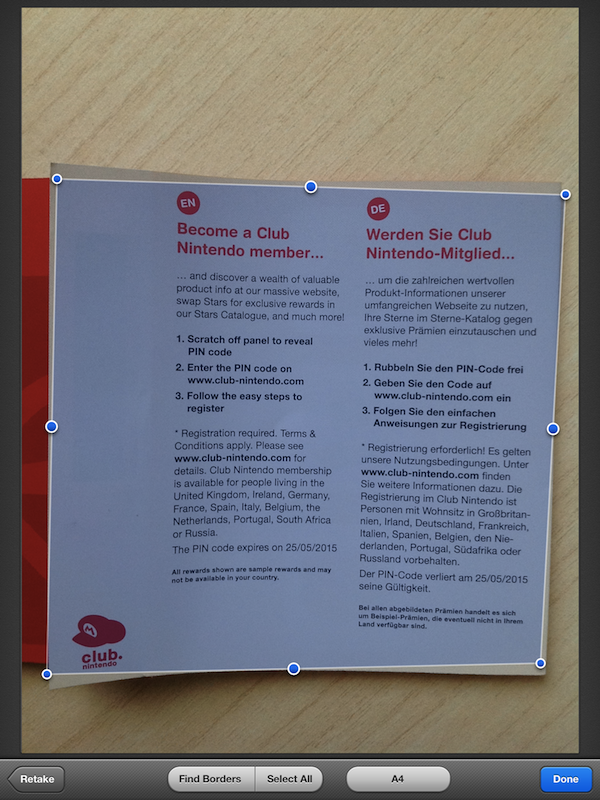 Scanner Pro, a camera-based scanning application for iOS devices by Readdle, has been updated to version 4.0, which adds a number of engine optimizations and new features, as well as support for the iPad. I was able to test the latest update to Scanner Pro, and I’m thoroughly impressed by the degree of independence and reliability Readdle achieved with Scanner Pro 4.0.

Let me explain. Until today, I have exclusively relied on a large, heavy wireless printer/scanner or my portable Doxie Go to scan, manage, and organize documents. In order to achieve a seamless paperless setup that required zero, or at least very minimal effort to be maintained and consistently used, I thought that the Doxie Go would be the solution for all my needs, as it offers a portable and lightweight device that outputs images at great quality in PDF. More often than not, however, the new devices and apps we have available nowadays bring new questions for issues we thought we had already figured out; as I began using the iPad as my primary computer, I realized how the Doxie, albeit well-designed and extremely usable, would still require me to use a computer to import scans, organize them, delete the ones I didn’t like, and upload the rest to Evernote.

I asked myself whether the iPad could even become a scanner. After all, the new iPad got a solid camera update in its latest version, and whilst not on par with the iPhone 4S’ camera, an iPhone 4-like lens – I assumed – could probably be a decent alternative to physical scanners, even the portable ones. The difference was mainly in the software: I wasn’t looking for an iPad accessory to turn the device into a scanner, I was scouting around for great scanner apps that would a) work reliably on the new iPad and Retina display, and b) support various online services, have basic document management features, and an “Open In” menu. Fortunately, Scanner Pro 4.0 by Readdle fits all these requisites, and it does so in a way that allows me to say this is the scanner app to try if you own a new iPad, and plan on going paperless using it.I wasn’t religious about scanning and shredding paper documents until a few months ago. While I may not have all these hundreds of documents flying by my desk on a daily basis, I still like to scan the monthly bills, work documents, receipts, and the occasional business card I happen to have in my wallet. In my workflow, I tend to save scanned documents as PDFs or JPEGs in Evernote, as the service supports search data both on the Mac and iOS. I can scan a document, save it either as image or PDF into Evernote, and anywhere in the Evernote app simply search for, say, “Blue Yeti” and have it look for that string inside my scanned documents. If, for some reason, I don’t want to scan a particular document to Evernote, I usually save it into Dropbox, or open it in PDF Expert, also by Readdle, or GoodReader.

Scanner Pro itself can’t do OCR (optical character recognition) because while good, the iPad’s camera isn’t good enough to guarantee 100% reliable OCR. Personally, I’m happy with the results obtained by Evernote, and if you’re on the Mac and you’re looking for a robust solution to manage your paperless office, you should also consider DEVONthink (and this book by Joe Kissel). 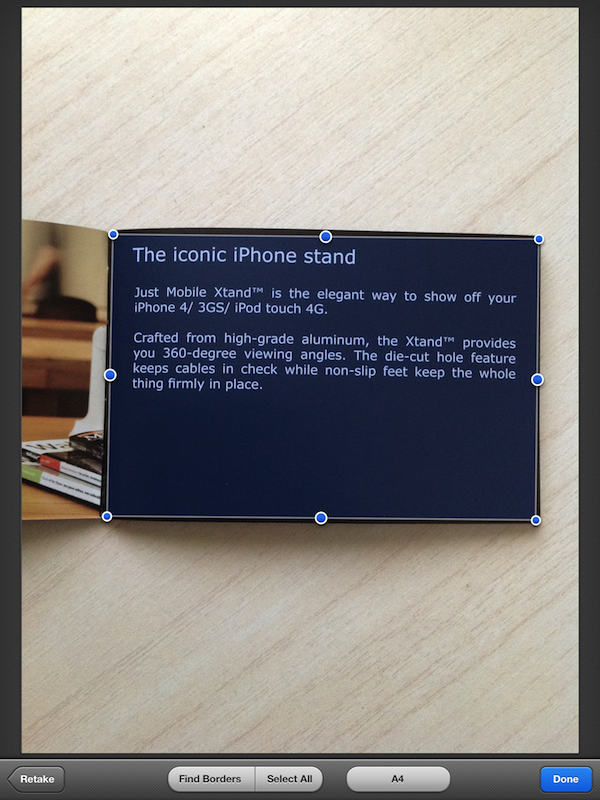 Scanner Pro 4.0 works both on the iPhone and iPad. For the purpose of this post, and because it has found a place in my workflow, I will be looking at the iPad version of the app (the app is universal). Scanner Pro is a scanner app, in that it uses the device’s camera to capture an image. You can also import an image from your photo library, but I like to scan images using Scanner Pro’s own camera interface. The camera view embedded in Scanner Pro resembles the standard iOS 5.1 camera with a shutter button on the side and additional controls along the bottom – in the toolbar, you can indeed Cancel a photo session or disable the (useful) help grid. Obviously, because the app wants you to take great pictures that will turn into scans, you can’t use the iPad’s front-facing camera in Scanner Pro.

After you’ve taken a picture of your document, Scanner Pro begins pulling its magic. First, the app will try to automatically apply borders to the image, trying to guess where a document “begins” and where it “ends” based on background colors, focus, and shadows. At the same time, it also tries to apply the default format selected in the Settings, be it A4, Letter, Legal, Business Card, and so forth. The selection tools displayed on screen look just like standard iOS controls, but Readdle improved on Apple’s stock implementation by adding an additional control point in the middle to further refine the orientation of the line you want to crop. This is especially handy for paper documents that don’t always lie perfectly flat on a table (see photo above) – this selection tool can help you “follow” the border of a document more precisely. It is also easier done than described in an article.

At any time, you can tap on shortcuts to automatically select an entire document, re-find the borders, or retake a picture. In my tests (and in decent light conditions during the morning/afternoon), Scanner Pro correctly picked the right borders of a document 90% of the time, needing my manual tweaking only to adjust selection just the way I wanted. As you’re using a scanning software that captures images through a mobile camera, you’d want to make sure you are taking photos against an uncluttered background that’s well contrasted with the subject – I’d recommend you don’t take pictures with Scanner Pro with “busy”, or otherwise cluttered and messy backgrounds.

Once taken, you can decide to tweak the resulting scan as photo, document, or grayscale file. The “photo” setting will keep the colored image, “document” will try to strip out some graphic elements to create the typical PDF, whereas “grayscale” will turn the image to black & white. For all settings, you can adjust contrast and brightness with two slider controls at the sides. Usually, I choose “document”.

With a scanned image now saved in Scanner Pro’s library, you can decide to keep adding more scans to a document – Scanner Pro treats a “document” as a stack of scanned images that can be grouped together – or go back to the file management interface. If you stay in the image view, you can hide the sidebar listing all your scans on the left, swipe between documents, rotate, delete, and share. The sharing options are particularly rich: you can share a document via email as JPEG or PDF, save to the Camera Roll, print, Open In, send via Fax (yes, really), or upload. Scanner Pro can upload to Dropbox (any folder, but it allows you to create a dedicated Scanner Pro one), Google Docs, WebDAV, and Evernote. If you’re an Evernote user, you can send as JPEG or PDF, choose a title, notebook, and tag for your document, and even pick a location.

As mentioned above, Scanner Pro comes with a file management interface. It’s really basic, but it allows you to organize documents in folders (the way the app lets you drag & drop files is quite clever), search, and sort by date or name. You can also select multiple documents at once, and delete them or upload them.

Scanner Pro is, both from a visual and technical standpoint, a very good and solid app. It looks great, and more importantly it produces good-quality scans that can be exported to a variety of services. Question remains, however, as to whether people who scan a lot of documents on a daily basis should consider Scanner Pro (and the iPad) as a primary scanning tool. If you’re literally swamped in documents, you’d probably want to consider a physical scanner, as the iPad’s camera is good but not perfect, the device will eventually run out of juice, and because it may be uncomfortable to hold the iPad to scan documents for long periods of time. Furthermore, if you work in a corporate environment, it is likely your company won’t like the capability of sending documents over the air to online services.

But for the professional who runs a small business, or individuals who do scan documents, just not so many every day, I’d seriously suggest considering Scanner Pro on the new iPad. The device’s camera will give you decent images – especially with good lightning and background – and the app works with the services many are already using for document storage and archival.

Ultimately, Scanner Pro confirms that the iPad’s possible usage scenarios are only limited by the imagination of app makers and the software they build. If you want to use the iPad as a scanner, Scanner Pro is a great choice and it’s available at $6.99 on the App Store.