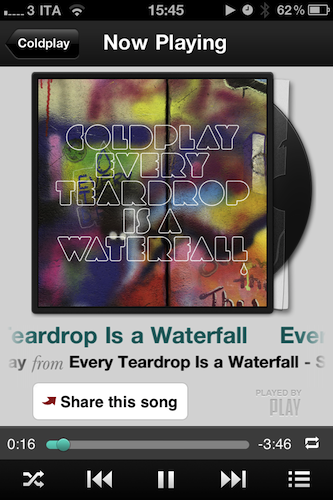 Play by AOL, the latest contendant in the social music discovery and sharing space, aims at providing a streamlined solution to what could be considered a common problem among iPhone and Android users: there is no unified system to share what you’re listening to and discover new music through the songs and albums your friends are liking. Ping by Apple failed at offering a solution truly meant for mobile with quick, instant access by being nothing but a mere social layer on top of the iTunes Store; on the other hand, apps like NowPlayer could be regarded as social attempts to get the music out of your device and onto the Internet (e.g. where your friends are), yet there’s always the issue with people finding tweets about #nowplaying annoying and, most of the times, out of context. Imagine if I tweeted all day about the music I’m listening to. That wouldn’t work. So that’s why in the past months we’ve seen the rise of SoundTracking (our review), a clever utility and social network by itself that lets you quickly share what’s playing on your device and send it off to an Instagram-like stream made by people you decided to follow within the app itself. Soundtracking can send items to Twitter and Facebook, but you don’t have to, as the app can live as a network on its own. Furthermore, sharing is made simple by a button that integrates with the iOS Music app to grab what’s playing in seconds, artist’s info and album artwork included.

Play by AOL, released last night, can be seen as an alternative to SoundTracking, only with a more streamlined process for sharing music, and with different options when it comes to listening what you have on your device, locally, or available through the cloud and AOL’s offerings. Whereas SoundTracking still remains a more “powerful” solution to share the music you love with Music ID, Music Search, and geo-location features introduced in the latest update, Play offers an elegant interface to access the music you’ve already synced or bought with iTunes, material from CD Listening Party, songs from MP3 of the Day and a large selection of internet radios (over 47,000 stations) from SHOUTcast Radio. Basically, Play packs a whole range of options to access music and then share it, rather than find or identify what you’re listening to. It’s a subtle difference, but it helps in positioning Play as a music player with sharing capabilities, instead of a utility to see what’s playing and share it with your friends. 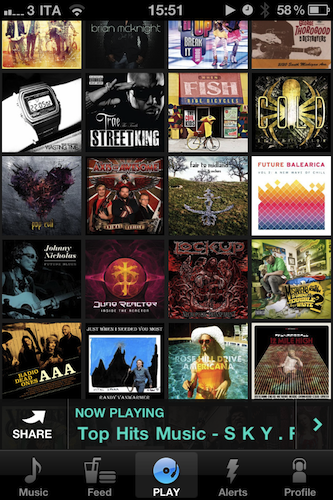 Play’s music player is very nice, as it’s got a search box on top, and tabs to switch between artists, albums, songs, genres, and playlists. The main list is organized alphabetically as in the Music app, and album artworks sit next to the artist’s or song’s name as you scroll. Once you select a song, Play doesn’t jump straight to a single song view – instead, a translucent bar slides across the bottom of the screen (but atop the main toolbar) to show “now playing” information, and a button to share. Tapping on the bar will get you to a detailed view with album artwork (the template choice is beautiful, and reminds of a Bowtie theme), and another button to share (as the translucent bar won’t be displayed here). Double-tapping the album artwork will open a list view of the songs within an album. This navigation system works the same across the different sections and sources listed in the Music tab – whether you’re listening to an Internet radio or free MP3, the concept is the same.

So what happens when you share? First off, Play lets you log in with Twitter and Facebook to find friends that are already using the app. Later, these logins will be used to share songs across the social networks, without logging in again. When you hit “share”, you’re brought to a new window with album artwork, song information, and a text field to add your own comments to a post. Two buttons at the bottom give you the option to forward a post to Twitter and Facebook, which will contain a link like this, pointing to a Play webpage. Notice how you can’t create a profile on the web, but only view the item you’ve shared (which, by the way, can be customized with a different image other than the default album artwork - you can insert a photo from your device’s camera roll, too). Like SoundTracking (or Instagram), your posts will end up in a “feed” in-app, made of your shared items and those from the people you follow. Both the main feed and user profiles are really simple design-wise, though I noticed scrolling isn’t as smooth as you’d expect from a native iOS app because, I guess, this is a web view optimized to be used on the iPhone (and other devices as well – Play is also available on the Android Market). Again, like SoundTracking, you can preview songs shared by your friends that also happen to be available on the iTunes Store, as well as like and leave a comment on posts. When new people start following you, like your songs, or leave a comment to your posts, Play will alert you with in-app badges and (optional) push notifications. Overall, I appreciate the modern, clean design of Play more than SoundTracking’s (sometimes confusing) feed, and I like how my profile on Play tells me how many “plays” I have. 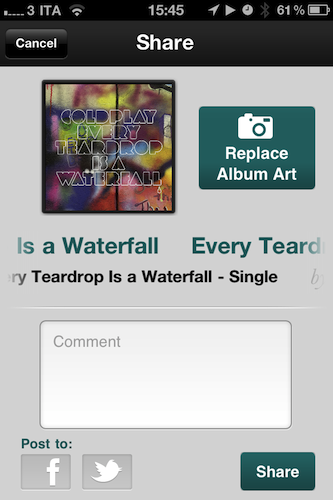 I like Play by AOL. It’s a got a nice design, it works well on my iPhone 4, and I can use it as an alternative player to the Music app. However, I do wonder what the future will hold for AOL’s social experiment: will people use this app to send songs off to Twitter and Facebook, ignoring the built-in network? Or will it replicate Instagram’s success, becoming another social network based entirely off mobile access with no web counterpart? And how does the multi-platform nature of the app fit in all this? More importantly, will new users of Play stick around after the novelty wears off, or will they go back to the standard Music app? I don’t know the answers to these questions, but I do believe that Play is an intriguing idea with a lot of potential. The app is free on the App Store, and you should give it a try.